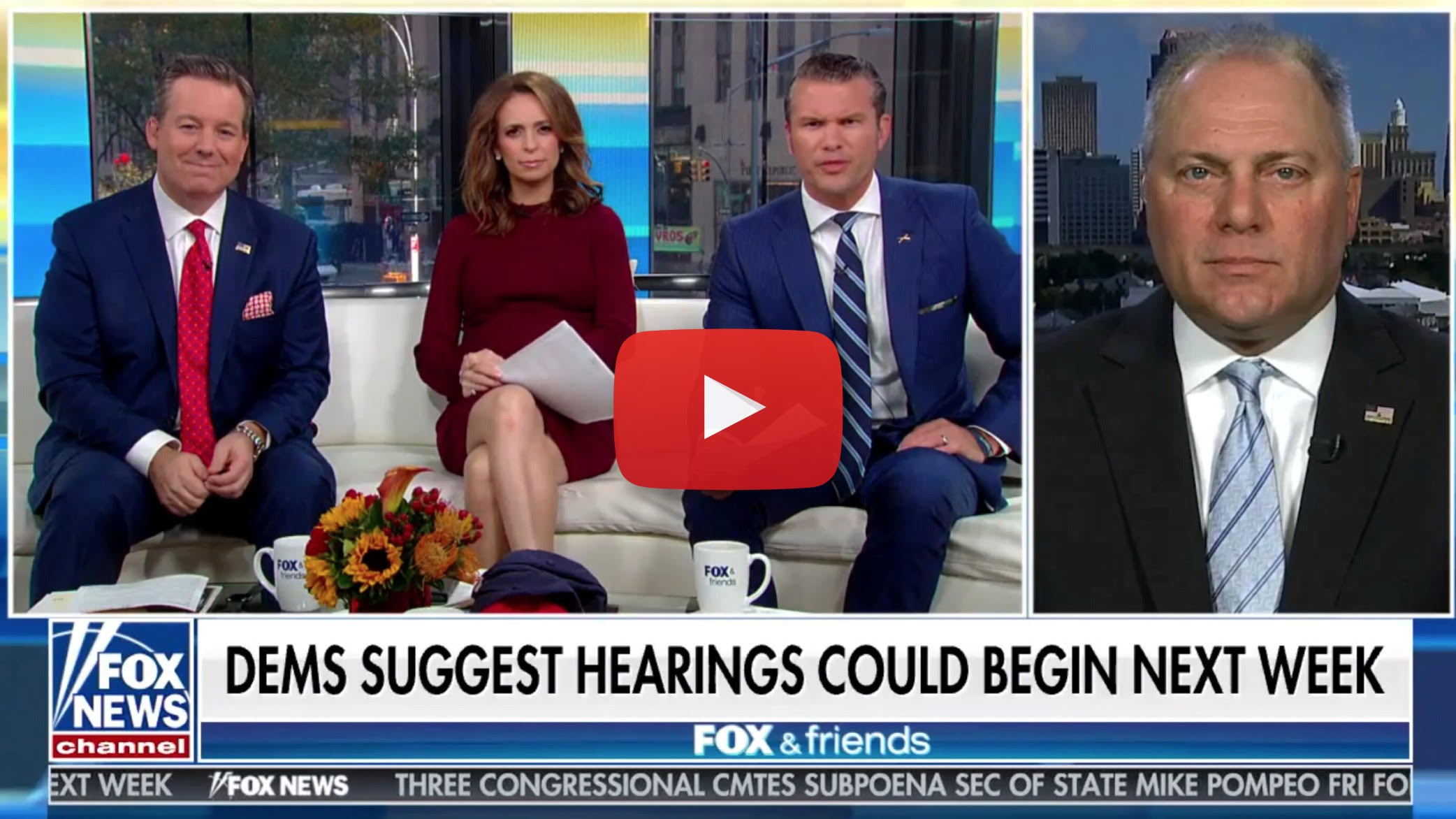 “It’s been a fishing expedition from the very beginning. There has never been a high crime or misdemeanor that they have been able to lay out and yet they just keep marching down this impeachment drum beat because their radical base wants this. This is something they said at the very beginning when they got the majority last year they would impeach the president regardless of fact. That’s the dangerous thing about this. And oh by the way, if they were so serious, why did Adam Schiff have to start his committee hearing with a parody, a joke, trying to make fun of this and actually lying about what really happened and trying to make up a conversation between the President and Ukraine President Zelensky? Why, by the way, if it is so serious, and think about this, Nancy Pelosi is saying she wants to start impeachment proceedings against the President of the United States, she didn’t even require a House Floor vote which has always been the case to start impeachment. If she really thought he should be removed, why did she then leave town for two weeks? The next two weeks Congress will not be in session. If you thought the President committed such a high crime and misdemeanor, that he should be removed, would you really leave town for two weeks or would you keep everybody there day and night to get to the bottom of the facts? There are no facts for impeachment, they want to appease the radical base and it is dangerous to go down this road.”

On Speaker Pelosi caving to the demands of the radical left:

“Well keep in mind, Nancy Pelosi barely got the votes to be elected Speaker. She has always been balancing most of her conference versus the squad, the radical socialists who have been driving her agenda this entire year. As it kept going on, they have been pushing for impeachment, she has been trying to hold them off and you saw over the weekend AOC who really is driving the speakership, not Nancy Pelosi, AOC tweeted out really going after Democrats for not doing enough on impeachment and low and behold two days later Nancy Pelosi says they are going to impeach the President and she said that she had evidence of the President breaking the law and it would come out with quid pro quo in this transcript and then the  transcript comes out and there is no quid pro quo, there are no high crimes and misdemeanors and instead of dropping it she’s got to continue appeasing the radical left base because they don’t like the results of the 2016 election.”

“First of all, there is no interference. I’m not comfortable with what Barack Obama did to work with Ukraine, back in 2016, to try to dig up dirt on Donald Trump and I don’t see anybody in the mainstream media having any concern about that.”

“I read the transcript which by the way they were saying would have quid pro quo. There is not a single mention of quid pro quo, any kind of foreign aid or all of those other things they were talking about. Zelensky himself, just the other day, said he was not pressured, there was no pressure. Zelensky brought up some of the corruption they were talking about. That conversation that was released a few days ago between President Trump and Presient Zelensky was talking about 2016 corruption, some of the involvement that Russia had was being based out of Ukraine back in 2016 and they are still investigating, Ukraine is still investigating, President Trump is still concerned about that corruption because he doesn’t want it to happen again. It happened on Barack Obama’s watch, the Russian interference with our election, but President Trump is trying to make sure it doesn’t happen again and that is what they are talking about in context of the conversation about interference.”

On the double standard for investigating President Trump:

“Clearly there’s a double standard. They’ve looked into the President, the President’s kids, his son-in-law, all of his cabinet, they have been making baseless allegations for years since he became President and there has been nothing to it. When you look at what did happen with Hunter Biden, by the way, that is not something President Trump has been raising for years, a lot of people have been raising that question for years. Joe Biden himself bragged about it, literally bragged laughing saying ‘hey, I was over there and told them in 6 hours I’m leaving with $1 billion unless you fire the prosecutor.’ For goodness sake, if that is not a quid pro quo, this is embarrassing that the media let this go for so long but i’m glad that’s being looked into. But the bottom line, President Zelensky got elected on an agenda to clean up corruption in Ukraine which everybody knew was going on for years. And so President Trump made a very gracious call congratulating him on his election and letting him know that America has got his back, there are some European countries that aren’t doing enough to help Ukraine and they talked about that as well.”

On Democrats in Washington becoming the party of impeachment:

“They are out of control. The socialist Democrats in Washington are now the party of impeachment. Literally just a few days ago, they were as you said talking about impeaching Justice Kavanaugh and then they had this whistleblower complaint that by the way when you read it is really curious, it was written by attorneys, not the person that might have been a CIA employee, so who was actually involved in helping coordinate that complaint, But in the end, they are now shifting it back over to impeaching the President which they said they wanted to do. Their leaders, Chairman Nadler, the day he got elected he said he wanted to impeach the President and yet there was no basis, there is still no basis and even you said there are no high crimes and misdemeanors which is the standard in the Constitution. If something comes to you, an actual violation of law, not a third-party account as this complaint is, riddled with misinformation. If somebody actually came to you with something you would look and see if there was wrongdoing. You wouldn’t start an articles of impeachment inquiry without even having high crimes and misdemeanors and that is what they have done because they want to impeach him, to appease the radical base, to try to reverse the 2016 election. We are going to have an election next year. The country will decide who is going to be President, if President Trump stays or if it is somebody else, Congress shouldn’t try to interfere with the results of the 2016 election.”

On the need to focus on American people’s priorities:

“It really is, it’s just bizarre times. If there were real crimes that had come to them, and they have been looking, they thought the Mueller report was going to yield that and it wasn’t and think about this, there are so many things we could have gotten done. USMCA, a better trade deal for America with Canada and Mexico between the United States, could be law today, over 160,000 jobs, they won’t bring that to the floor. Lower drug prices. we passed a bill out of committee unanimously. Every Republican, every Democrat came together in show to bring that bill to the floor. A lot of really good things should be getting done.”