When the forgotten men and women of America told Washington that NAFTA wasn’t working for them, President Trump listened. Critics said he couldn’t get USMCA done. But with buy-in from our neighbors to the north and south, hard work from the USMCA Whip Team, and the steady hands of Republican leader Kevin Brady and U.S. Trade Representative Bob Lighthizer, President Trump did it. 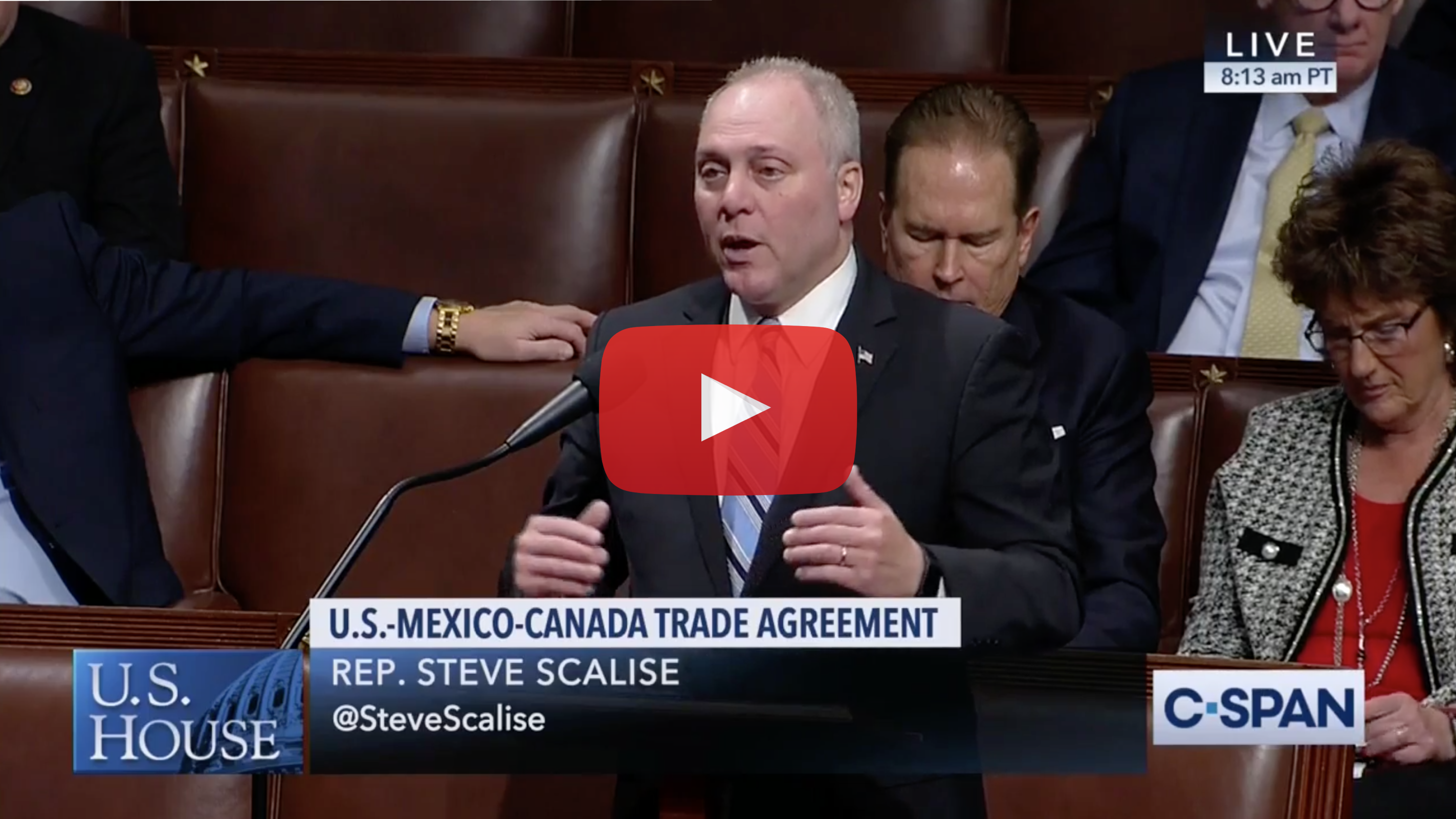 Click here or on the image above to watch his full remarks.

“I thank Chairman Brady for yielding and I want to thank all the people that we’ve worked with to get to this point, because passing the United States-Mexico-Canada Trade Agreement is going to be a major victory for American workers. Yet another sign that we can improve on our current trade relationships.

“I think a lot of people were concerned that maybe the President would pull out of NAFTA because he was clearly critical of the flaws of the previous agreement. But what he did was actually go and negotiate with Mexico and get a better deal for American workers. Then he went to Canada, who might have been a little more reluctant, but got a better deal with Canada as well.

“And so what you see is not only a trade agreement that is a major win for the American economy — conservative estimates show over 160,000 new jobs get created, agriculture gets a big win because many of our products that we can’t sell to Canada will be able to now be sent to those markets.

“So this shows how Congress can work with this administration to do something that’s really good for American workers. But what it also does Madam Speaker is it sends a message to the rest of the world that we can work with our friends to get better trade deals. Our other friends around the world like Japan, like the United Kingdom, who would like to work to get better trade deals but knew if you can’t get a deal with your neighbors from the north and south, you’re surely not going to be able to get a deal with anyone else.

“Now this tells them that we can close deals and that there are other countries lining up that want to be a part of this economy. We have the hottest economy in the world and it’s only going to get better for workers here. But it then sends a message to China that not just America wants to send, but a message that all of our allies around the world want to send: that when you do business with America, you have to follow the rules. You can’t play by your own set of rules.

“And so now for enforcement of deals, it really shows that China is going to have to become part of the world economy and play by the rules that everyone else in the world plays by. And that’s an important win for all of those forgotten men and women across this country, who appreciate the work President Trump’s done, Bob Lighthizer, who’s been his quarterback on this all the way through, and everyone else.

“So it’s going to be a big win for our country, for our economy. And with that I yield back the balance of my time.”