WASHINGTON, D.C.—House Republican Whip Steve Scalise (R-La.) joined Fox News Channel’s America’s Newsroom to discuss Speaker Pelosi solidifying House Democrats’ legacy as the party of impeachment. Whip Scalise emphasized how Democrats have been solely focused on their own political power instead of fighting for the men and women of this country.

Following President Trump’s inspiring State of the Union speech, Speaker Pelosi showed millions of Americans how out of touch her Democrat party is with the entire country. Thankfully, President Trump and House Republicans are committed to delivering results for the American people. 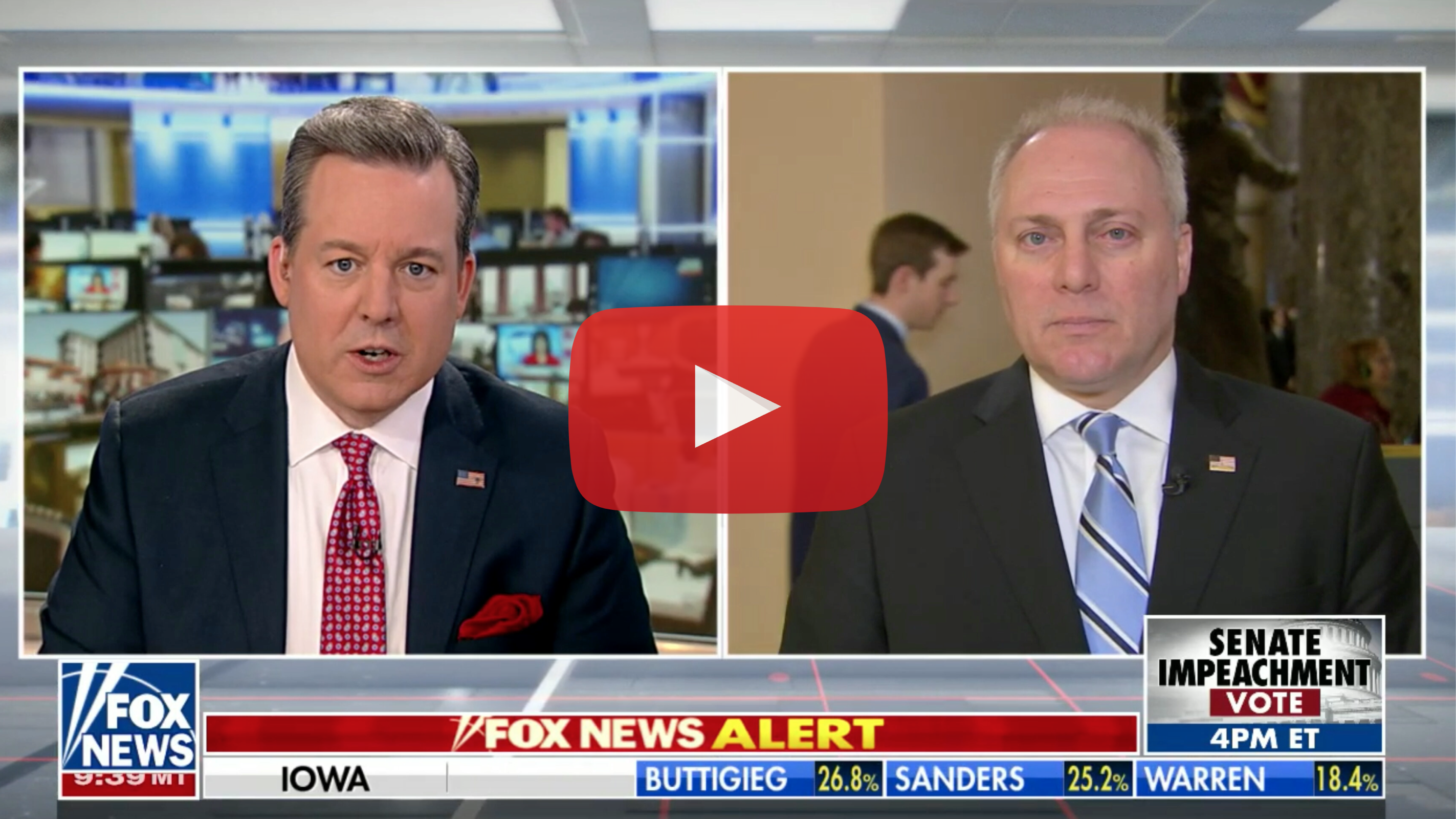 On Democrats’ impeachment in search of a crime:

“In the House we had a bipartisan vote against impeachment, in fact, every Republican voted no and we had Democrats that joined with us. If you’re voting based on the facts, you would vote against impeachment. They never were able to identify a crime. They looked around for a crime [with] the Mueller investigation for 22 months. But at the end of the day, look, I think this is going to be a stain on the Democrat party, on Speaker Pelosi’s speakership. They set out from day one to impeach this President, it had nothing to do with crimes. Remember, over 50 Democrats voted to impeach Donald Trump because he criticized NFL players who kneeled during the [National Anthem]. That’s how disgraceful this has been. They put this country through this, they wasted, by the way, a year of their majority not fighting for men and women of this country like President Trump talked about last night. What President Trump’s been doing to deliver for families. They have been focused on their own political power and I think that’s ultimately going to be a stain on Speaker Pelosi’s legacy.”

On impeachment being the Democrats’ only agenda:

“[Democrats] have tipped their hat a long time ago that they are the party of impeachment. They said they might still try to impeach him even more. Again, go read multiple articles of impeachment that were filed long before the whistleblower and long before the Ukraine call. Again, 58 Democrats voted to impeach him for criticizing NFL players who kneeled during the [National Anthem]. This is all they have. They have no agenda, they don’t care about the men and women of this country. They literally sat down last night when President Trump is talking about this young girl who’s going to get an opportunity scholarship to go to the school of her choice instead of a failing government school. That’s where they are as a party. I mean, that’s not where the country is, by the way. There are Democrats across the country that were looking in disgrace at what Speaker Pelosi did ripping up that speech which contained the names of Tuskegee Airmen, of soldiers who gave their life for this country, of so many other people that are great. What makes this country great, that’s what the President was celebrating and that’s what they ripped up because they don’t celebrate the success of America like President Trump does. And frankly, that’s why President Trump has got such a great case to make going into the election. They’re the party of impeachment, that’s all they’ve got.”

On Democrats’ refusal to stand for American achievements:

“Rush Limbaugh inspired millions of people, still does to this day. I surely was inspired. I listened to him when I was a student at LSU just learning about politics and government and Rush was on the radio. And he still does that today, speaking truth to power, on both sides, by the way. The fact that President Trump celebrated him not just for what he has done on radio, but in his battle against cancer. Rush is a tough guy. I hope he beats cancer. But everybody should have stood for that. I think it makes [Democrats] look little as a party when they don’t do that. But the rest of the country, again, there are Democrats all across the country going, ‘That’s not where I am,’ whether they agree or disagree with the President. If you can’t stand up and celebrate what’s great about this country, people who are battling for their lives, men and women who are giving their lives, the killing of a terrorist who murdered hundreds of servicemen and women of this country – they can’t even stand for killing that terrorist. [It] says a lot about them.”