WASHINGTON, D.C.—House Republican Whip Steve Scalise (R-La.) joined Fox News Channel’s Fox and Friends to discuss President Trump’s victory in taking out Soleimani, one of the world’s most brutal terrorists. Whip Scalise blasted Washington Democrats who are so obsessed with tearing down President Trump, they’re willing to criticize his decisive action to take out an evil terrorist who was planning more attacks. The world is a safer place without Soleimani in it, and for that we have President Trump to thank. 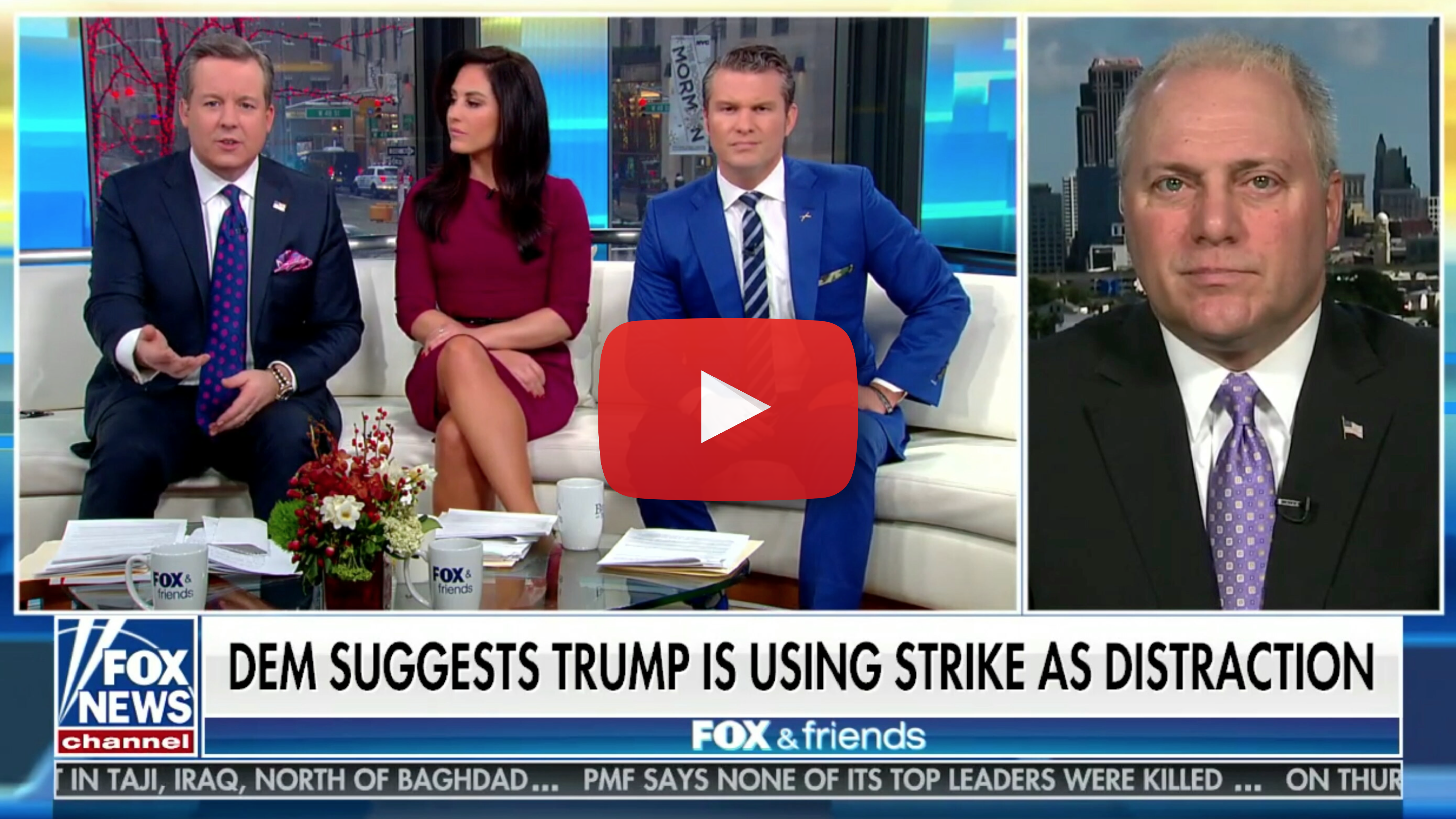 On Democrats being so obsessed with tearing down President Trump, they are willing to criticize his move to take out an evil terrorist:

“I think it just goes to show there are some people in Washington right now that are so concerned about their own political agenda, their own political power, that they will criticize a move that’s good for America and good for freedom all around the world. If you think about Soleimani, the people of Iran who want freedom, this is a major victory for them. Because as long as Iran is tied to terrorists like Soleimani, they’re never going to have theopportunity that every other country has, and you can see it holding the country back right now. So, the fact that President Trump took decisive action to protect Americans, what do they tell those Americans whose lives are at risk in the next terror attack, let alone theprevious terror attacks where hundreds of Americans were killed by Soleimani, thousands around the world? Were they okay with that, were they okay with him still walking theEarth? It’s important that President Trump took the action he did.”

On President Trump making the world a safer place by taking out Soleimani:

“I’m sure there will be more detailed briefings to Congress next week. I spoke to Vice President Pence about this yesterday, they’re expected to brief even deeper. But, theintelligence has been out there for a long time on Soleimani nobody disputes. It was theObama Administration that deemed him a terrorist. It’s not that there is a question about how dangerous this person was. The fact that he was planning other attacks, he was not only responsible for attacks in the last few weeks against Americans, that killed an American, but he was planning future attacks against America and we had a chance to take him out. Any responsible Commander in Chief would have done the same thing, but President Trump is the one who did. And I’m glad the President had the fortitude to say we’re going to put America first, we’re going to protect America and our allies around theworld by doing this. You know, if somebody wants to criticize him for it, I think they’re going to have to look in the mirror and say ‘whose side are you on?’ if you question something that actually makes America safer.”

“Nancy Pelosi is not a Senator. The House did their action. I think the House was wrong in impeaching the President, there was absolutely no proof. Every one of their star witnesses when asked under oath to name an impeachable offense, asked if there was any bribery, said ‘no.’ So there was no crime and yet they still move forward.”