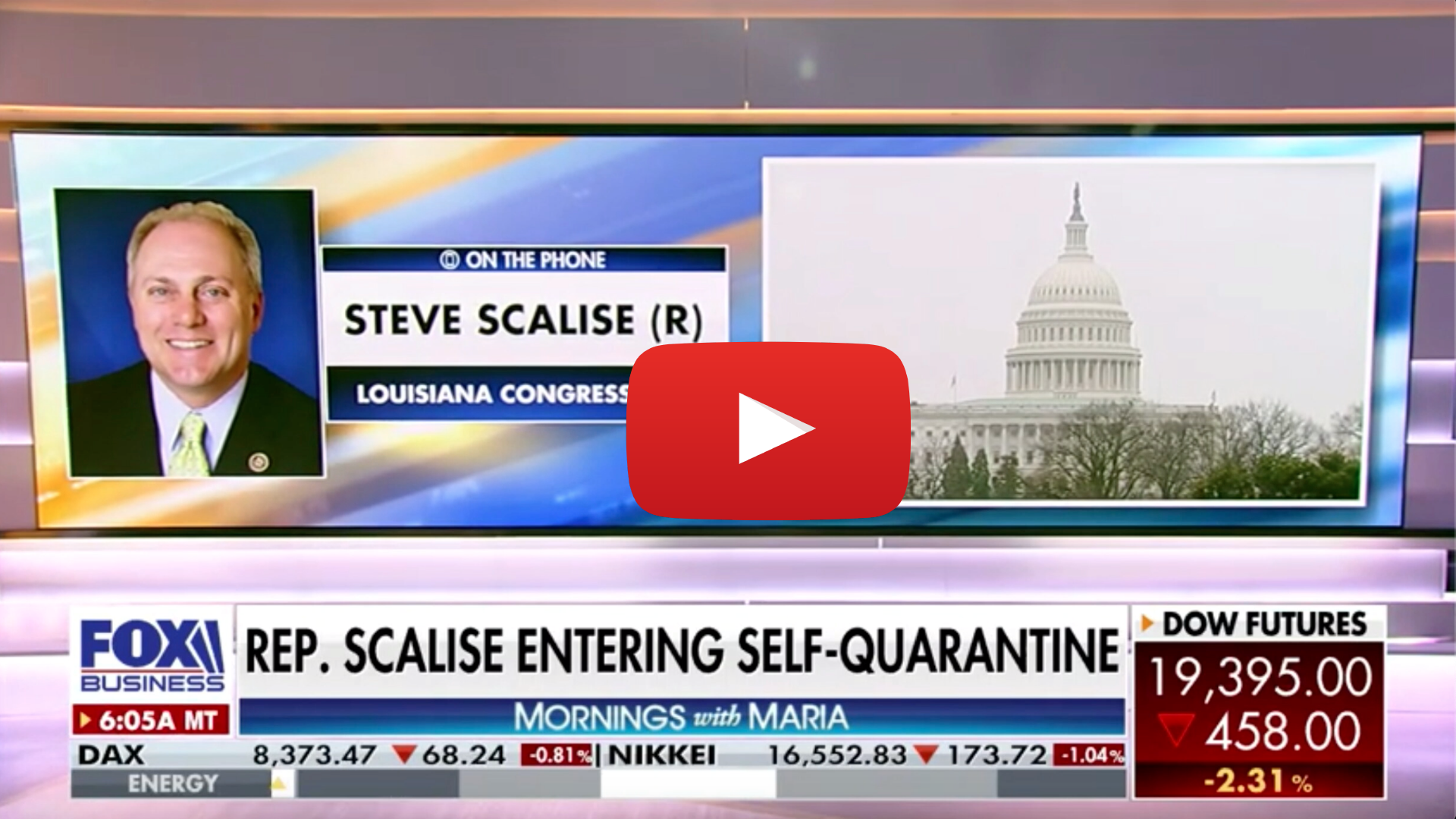 On Congressman Scalise’s decision to self-quarantine:

“I’m feeling fine and, you know, just out of an abundance of caution [I self-quarantined]. Being with Mario last week, last Friday we were meeting on a number of things but, you know, I just felt like the best thing to do would be to self-quarantine right now through the period. I talked to the [Attending Physician of the United States Congress] and that’s what he suggested too, so just not taking any extra chances.”

“No symptoms, feeling great. You know, I talked to the [Attending Physician] about what things you would look for, but fortunately none of those things are there. I’ve been on a lot of conference calls, of course still dealing with so many different items that we’re working on from the bill that passed and got signed yesterday by the President, to the things that we’ve got to do next to make sure that we can keep the country’s economy going, keep families afloat while we work through this.”

On Congress’ ongoing response to Coronavirus:

“I’ve been on a number of calls with Secretary Mnuchin who’s been doing a great job, and the President, to at least identify what are all the different things we need to do to make sure that families have money in their pockets so that they’re able to make their house notes, their car notes, pay their rent, as well as working with businesses. And yesterday, I did a call with small businesses throughout Southeast Louisiana. We had over a thousand small businesses on the call, a lot of similar kind of questions, and really there are two things that you’re hearing from businesses – small, medium, and large – they’re trying to figure out, you know, they know that we don’t know exactly when this is going to end, but they sure like to have an idea of when it’s going to end because they want to make a decision. They’ve got notes to pay, they’ve got bank loans coming out, and they’ve got payroll and they want to know, can they keep their employees and can they make their notes at the same time? And that’s what we need to be focused on in this next package, and I think you’ve heard from the President. He wants all of those things addressed. How do you make sure that families have money to cover their notes while they’re being forced to stay at home, other companies are not getting any kind of cash flow, and then how do you keep those businesses afloat so that when we do get beyond this in the next few weeks we have an economy to come back to?”

“[Congress is considering] a very large package, and I think you’re going to see a package that big, if not a little bit larger, because all of the different items that Secretary Mnuchin has talked about, a lot of this publicly. We’re working individually through all of our committees of jurisdiction to identify – what are the best things that are going to get cash in the economy and be effective. You don’t just want to throw money out there, you want the money to be spent properly to help keep businesses afloat so that workers, hopefully, and look, we’ve already seen a lot of layoffs. Hopefully we can stave that off. But a lot of these businesses are looking for some kind of idea of what’s going to be there for them because they do have notes to pay. And look, we saw some of this after Hurricane Katrina, but no two disasters and crises are similar, but you had in many cases in [New Orleans], months of no cash flow. And so, there were a lot of things done, in that case the FDIC gave flexibility to local banks to give them the authority to add, for example, 90 days forbearance so that banks could work with their local businesses knowing they didn’t have cash flow and saying, ‘Okay you’ve got a loan due on Monday, we’re going to push all of your loans off for 90 days, we’re going to add 90 days to your note.’ It’s not like they just said you don’t have to pay anything, but they gave them that flexibility and it helped a lot of those businesses through it Maria so that they could keep their employees, and that they could keep making some payroll while they also recognized they don’t have to sell off all their assets to pay the notes that are due to other banks. And it was something that, you know, people just had to work together and I’m sure a lot of businesses are talking to their bankers, and their lenders right now, and we need to make sure through the FDIC and other agencies that they’ve got the flexibility.”

“I know Secretary Mnuchin’s putting out probably well over a trillion dollars of commercial paper to put more liquidity into the market. So, all of that’s being done at the same time. We know we have to move fast because businesses are literally making these decisions every day. I’ve talked to employers who are making decisions on thousands of employees, whether or not to keep them or to lay them off, and we want to help work with them to keep those employees while they can stay afloat when we come out of this.”