WASHINGTON, D.C.—House Republican Whip Steve Scalise (R-La.) joined Fox Business Network’s Lou Dobbs Tonight to discuss his role as Ranking Member of the Select Subcommittee on the Coronavirus Crisis. Whip Scalise blasted Speaker Pelosi for attempting to use the Subcommittee to harass President Trump instead of addressing China’s cover-up, combatting the virus, and reopening our economy. 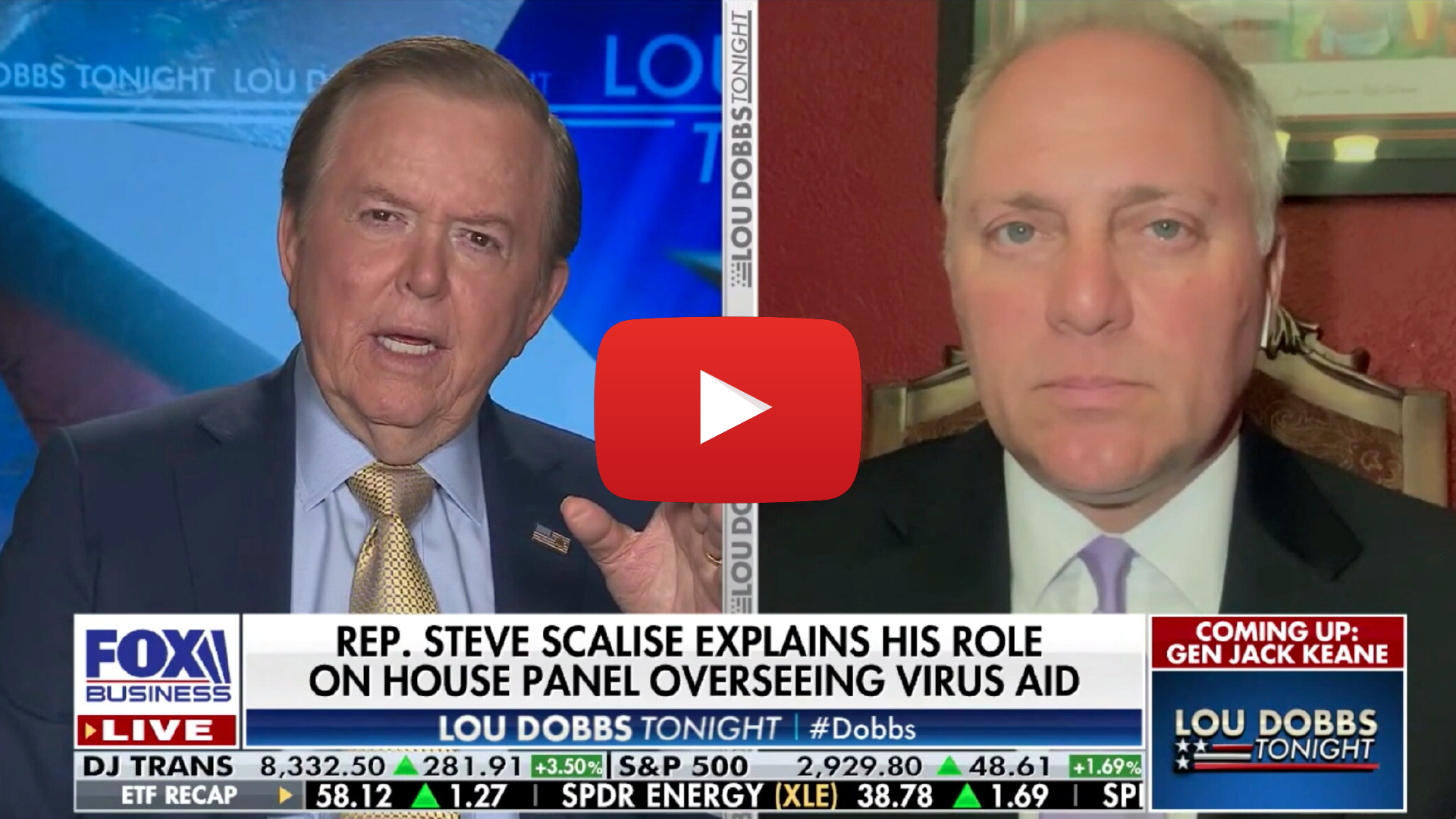 On Speaker Pelosi attempting to use the Select Subcommittee on the Coronavirus Crisis to harass President Trump:

“We’ve seen this playbook before. You know, this is where Nancy Pelosi started with her majority. Every single day from the day she took the gavel as Speaker of the House was to harass President Trump. They’ve done it before impeachment, they tried to build a case for impeachment, there was nothing the President did wrong. The Mueller investigation didn’t yield what they thought. Then you had the whistleblower and they thought the whistleblower was going to yield something, and then President Trump actually threw a curveball at them by releasing the transcript, something nobody expected, and it undermined their case because the transcripts showed that the President did everything right. In fact, [he] had a perfect call and the President of Ukraine said it was a really good call and appreciated talking to President Trump, but yet they still moved on and impeached him anyway to appease their radical base and Lou, they haven’t stopped.

“And you can see with the creation of this committee. There are, as we pointed out, a lot of other Oversight Committees in Congress that already have the ability to go and look into fraud and mismanagement of funds. They’re not doing any of that, by the way, and there [are] Inspectors General. [Democrats] set this committee up specifically to keep harassing President Trump and to try to interfere with the 2020 election that’s coming up in November. This is all about politics for November. They’re wasting millions of taxpayer dollars, by the way, and the real concern, Lou, the real shame of all this is that if Speaker Pelosi was spending her time in her majority calling out China, actually holding China accountable and, by the way, helping families who still to this day are struggling with this tough economic time and trying to get businesses back open, they could actually be very effective at helping our country move forward. Instead all they want to do is keep trying to hit and bludgeon the President and hurt him from doing his job working for the American people. The good news is President Trump doesn’t let this deter him, he works hard every day for families while Speaker Pelosi is only fighting and concerned about her political power.”

On Speaker Pelosi’s failure to bring the House back to work:

“I’ve been in some of those meetings just in the last year and a half with President Trump at the White House where Nancy Pelosi stormed out. It happened multiple times, by the way, and other Democrats stayed in the room. It’s not like everybody left. And we kept conducting business, President Trump hasn’t been deterred by this. But it’s a shame that you don’t have a willing partner that is looking out for the good of this country, the American people, they’re only looking out for their own raw political power. And frankly, I think that’s what disgusts people about politics and it’s backfired on them during impeachment. People, you saw the polling, people got fed up with their quest for personal hatred against the President and the fact that they haven’t let it go even during this pandemic and can’t pull together and try to work with the President to hold China accountable and help families get back on their feet. That’s what every day should be spent on, for whatever reason Speaker Pelosi wouldn’t call Congress in this week, the Senate was able to go back in, they didn’t have any problems. President Trump, as you mentioned, with Vice President Pence and his whole Coronavirus Task Force goes to work every single day. You see him out there. The President was paying tribute to our World War II veterans today with the First Lady, and yet, Speaker Pelosi can’t find the time to come back and fight for families. We’re going to keep doing it, we’re going to keep fighting for those families, and ultimately, I think that’s backfiring on them and it will continue to.”

On President Trump’s steady leadership through the Coronavirus crisis:

“Look, we’re in tough times but who better to bring our country out of these tumultuous times than the President who is already rebuilding our economy and got us to be the hottest economy in the world, and some of the best job numbers in the history of America. We got there already under President Trump, we will get there again. You look at Joe Biden, I mean, does anybody trust him with his hand on the helm? Look at his involvement in all of these scandals, I mean my goodness, we’re seeing every day more devastating facts come out against Adam Schiff and this Russian hoax that Barack Obama and Joe Biden were behind. I think President Trump’s doing a great job and will get reelected.”