Click here or on the image below to watch. 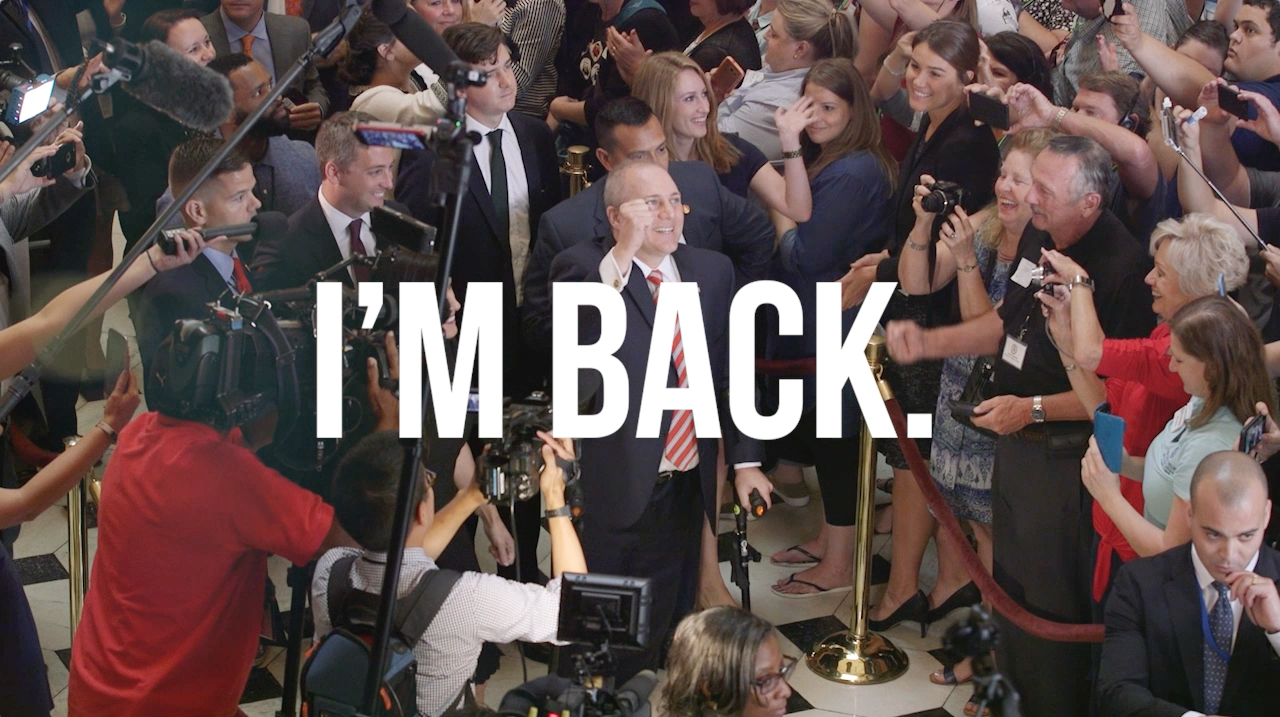 Washington Post: ‘Miracles really do happen’: Rep. Scalise returns to Congress 15 weeks after he was shot
“Democrats waved and whooped at Scalise from across the chamber. Faces throughout the room tightened to stifle tears as Scalise thanked God, family, friends, colleagues, doctors and the law enforcement officers who ultimately killed the shooter before he could do more harm.”

Fox News: Scalise returns to Capitol Hill for first time since shooting, declares ‘I’m back’
“Majority Whip Steve Scalise made a surprise and triumphant return Thursday to the floor of the House of Representatives…Colleagues erupted in applause and gave Scalise a standing ovation as he entered the chamber on crutches, wearing a dark suit and a striped red tie. Colleagues embraced him as he walked to the podium, where he delivered a first-hand and emotional telling of the journey that brought him back to Washington these past three months.”

The Advocate (New Orleans, Baton Rouge, La.): Steve Scalise makes return to U.S. Capitol: ‘You have no idea how great this feels to be back’
“Scalise, who walked into a standing ovation that lasted several minutes, said that he is a ‘living example that miracles really do happen.’ …The Louisiana Republican said he received an outpouring of prayers and support following the shooting, noting the blood drives and prayer groups not only in his home state but across the country… Scalise said that although many may focus on the ‘evil act’ of that day, ‘all I remember are the thousands of acts of kindness and warmth that came out of this and kept me going.’”

The Hill: Scalise returns to House with standing ovation
“His surprise return offered a brief moment of bipartisan comity in a chamber full of members accustomed to publicly sparring with each other. Some lawmakers could be seen wiping their eyes as they watched Scalise reflect on his recovery.”

New York Times: Three months after shooting, Steve Scalise makes emotional return to House
“‘It shows you if you fight and persevere, you can overcome anything,’ Mr. Scalise told reporters as he entered the House chamber to thundering applause from his colleagues, who were awaiting his return.”

CNN: Steve Scalise returns to Congress, says he is ‘a living example that miracles really do happen’
“During his speech, Scalise said leaders from around the world — including Israeli Prime Minister Benjamin Netanyahu, British Prime Minister Theresa May and King Abdullah II of Jordan — reached out to him to send well wishes, a sign he saw of how important the US Congress is to the rest of the world.”

ABC: Congressman shot in Virginia returns to House floor, thanks cop who saved his life: ‘You are my hero’
“Scalise entered the House floor on crutches Thursday morning with a beaming smile and was met with a standing ovation, pats on the back, and hugs from his colleagues. ‘You have no idea how great this feels to be back here at work in the people’s House,’ the Louisiana congressman said while addressing his colleagues.”

Times-Picayune (New Orleans, La.): Watch Steve Scalise’s emotional speech upon returning to Congress
“Has the shooting changed him? ‘It’s only strengthened my faith in God, and it’s really crystallized what shows up as the goodness in people,’ said Scalise, 51. ‘To me, all I remember were the thousand acts of kindness.’”

Politico: Scalise returns to Congress for first time since shooting
“But after months of treatment and steady recovery, Scalise made his first journey from the hospital to the Hill. Tearful lawmakers from both sides of the aisle greeted him with a standing ovation as he addressed the House floor.”

NBC: Scalise returns to House floor for first time since shooting
“House Speaker Paul Ryan, who earlier had shed tears upon his colleague’s appearance, choked up once again as he announced the ‘return of our dear friend.’ ‘Our prayers have been answered,’ Ryan said. President Donald Trump also weighed in, calling Scalise a ‘special man’ and ‘brave,’ adding that he was ‘so excited’ the congressman was back.”

Wall Street Journal: Steve Scalise returns to House for first time after baseball-field shoting
“Mr. Scalise credited Rep. Brad Wenstrup (R., Ohio), a former doctor and Iraq war veteran, for applying a tourniquet to his wound on the baseball field that helped staunch the blood. ‘The tourniquet he applied saved my life so I could make it to the hospital in time,’ Mr. Scalise said before embracing his fellow baseball teammate.”

USA Today: Rep. Steve Scalise is back to work after recovering from gunshot wound
“His remarks also recognized Crystal Griner and David Bailey, the Capitol Police officers in his security detail, as well as Jack Sava and Rob Golden, his doctors at MedStar Washington. Then he talked about his wife, Jennifer, who blew a kiss from the gallery. ‘Those of you who know her know how strong Jennifer is,’ he said. ‘She managed to hold our family together.’ He then blew a kiss back at his wife.”