TOPLINE: Just two weeks after his inauguration, President Biden abandoned all pretense of bipartisanship and decided to ram a partisan budget reconciliation through Congress. Critically, President Biden’s plan contains a job-killing $15-an-hour minimum wage, billions in unneeded bailout funds for state governments, and a whole host of other measures that will destabilize our recovering economy.

After weeks of calling for unity and bipartisanship, the Biden Administration has decided to ignore Congressional Republicans, and the millions of Americans they represent, to ram through a partisan COVID-relief bill that will cost nearly $2 trillion. Again, despite calls for bipartisanship, there is no indication President Biden will change so much as a cent of his plan to accommodate Republican concerns.

President Biden’s partisan relief plan is incredibly expensive and comes while over $1 trillion in funds from previously-enacted stimulus laws remain unspent. The House and Senate have both continued to pass targeted, effective, and bipartisan relief measures. Democrats’ latest scheme abandons that precedent in favor of a slate of liberal wish-list items unrelated to the ongoing pandemic.

The House is expected to consider Democrats’ budget resolution, which establishes the groundwork for budget reconciliation, as early as tomorrow. Text has not been made available to Members. Democrats will bypass a Budget Committee markup.

Many of the policies contained within President Biden’s plan will destroy many small businesses that have already been through an incredibly tough year. The minimum-wage proposal alone is projected to raise the federal minimum wage for restaurants 700% and cost the American economy at least 1.3 million jobs.

There are substantial and abundant procedural reasons to oppose President Biden’s partisan budget reconciliation process. Importantly, the inclusion of minimum wage and paid leave in this proposal would violate the Senate’s Byrd Rule — if Democrats force these provisions through, they will effectively eliminate the Senate filibuster. Even Democrat House Budget Chair John Yarmouth said doing so would be the “ultimate power move” and “I’m not sure it’s the smartest thing to do.” 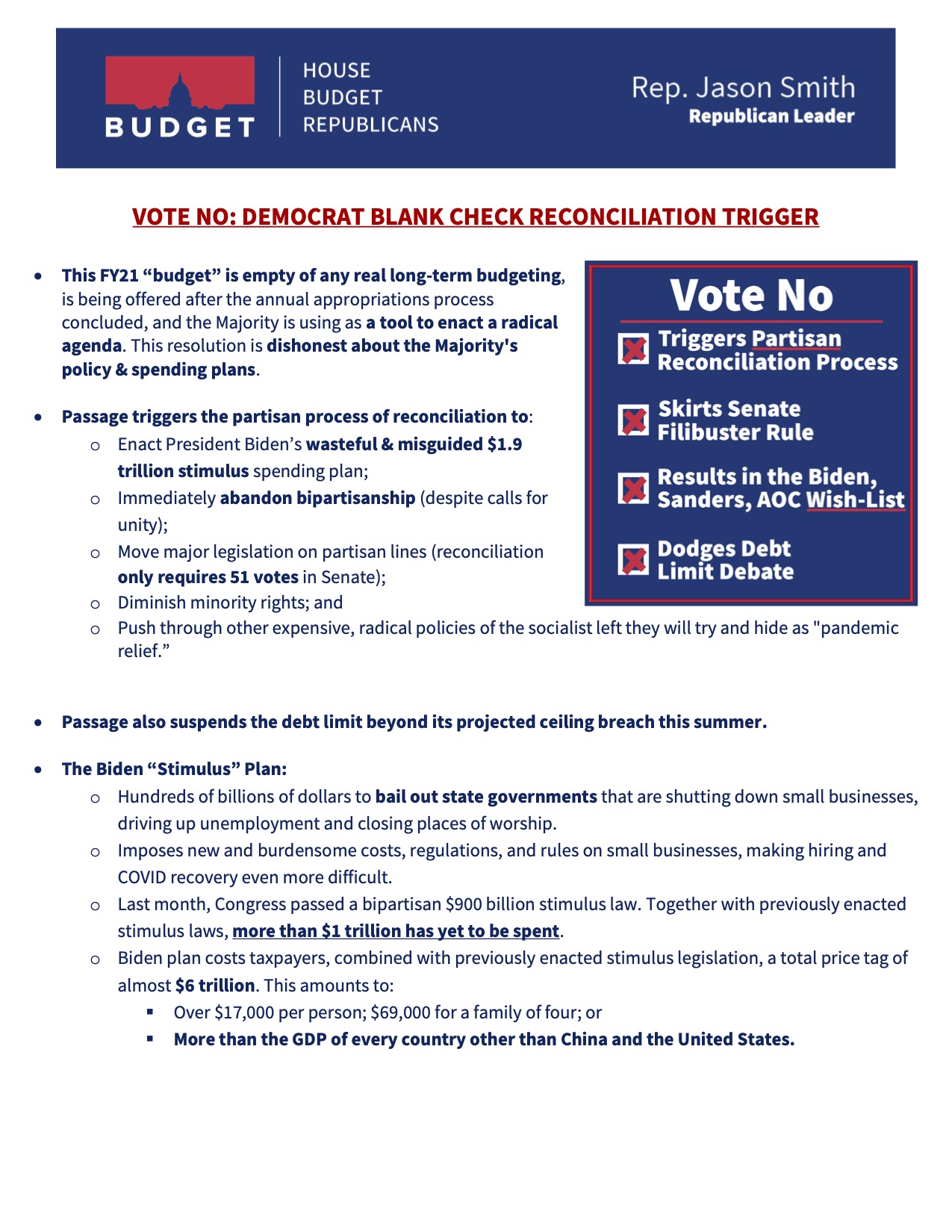 Click here or on the image below to view the fact sheet.

BOTTOM LINE: With this partisan budget reconciliation maneuver, President Biden makes a clear statement that he intends to govern only in Democrats’ best interests. This is just the start of Speaker Pelosi and Majority Leader Schumer’s efforts to dismantle longstanding Congressional traditions to force a liberal makeover on America.