TOPLINE: President Biden’s administration claimed that vaccine distribution plans “did not really exist” when he took office. This is false. Vaccinations topped one million per day within two days of Biden’s swearing-in, putting his “100 Million Shots in 100 Days” plan on track to succeed solely by leaning on the Trump administration’s efforts. 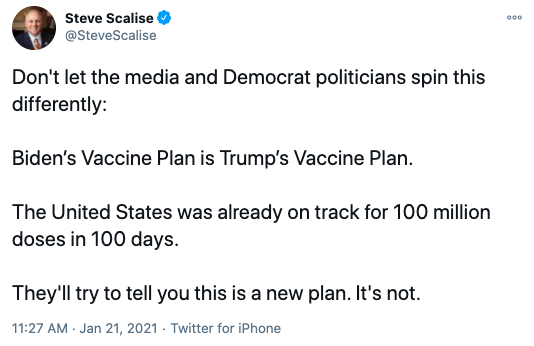 Soon after COVID-19 arrived in the United States, the Trump administration launched Operation Warp Speed (OWS), a moonshot program to deliver hundreds of millions of doses of safe, effective vaccines to Americans within months. Billions of federal dollars funded the development, production, and distribution of multiple successful vaccines.

President Biden and his top lieutenants are trying to erase this monumental accomplishment and take credit for the work of millions of American health care workers and scientists. 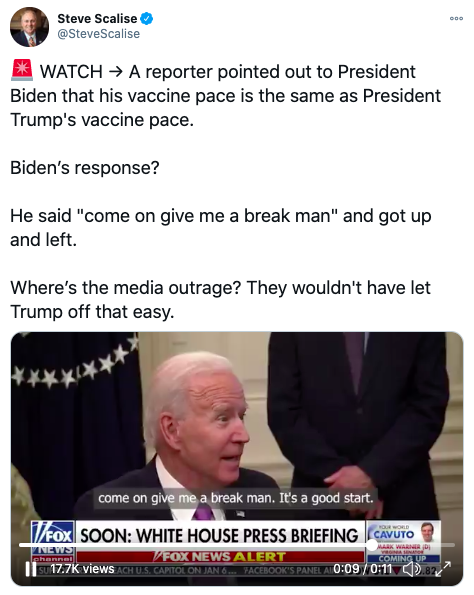 Late last week, Whip Scalise reacted to comments from Jeff Zients, the coordinator of President Biden’s COVID-19 task force, claiming the vaccine supply is “so much worse” than expected:

“Comments made about vaccine supply and distribution by the White House’s coronavirus czar are old Washington spin. The fact is the Biden Administration inherited contracts for 300 million doses of vaccines for two approved vaccines and two in the final stage of clinical trials. Because of Operation Warp Speed and President Trump’s strong leadership, the United States is already administering close to a million vaccines a day. By doing simple math, we are on track to deliver 100 million doses in 100 days, showing that President Biden’s plan is not a new plan at all and leans on the Trump Administration’s success. If President Biden wants to develop a new plan to administer 200 million vaccines in 100 days, Congressional Republicans stand ready to work with President Biden to help further speed vaccine distribution.”

CNN recently quoted anonymous Biden officials who claimed, “There is nothing for us to rework. We are going to have to build everything from scratch.”

Again, this is false. Anthony Fauci himself debunked it. 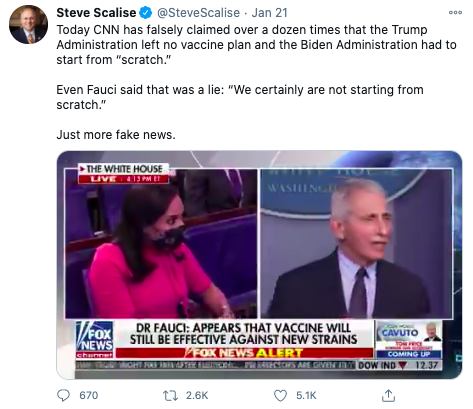 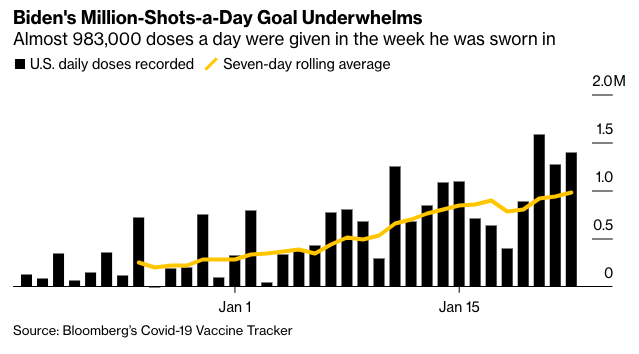 Even left-leaning media outlets and public health officials have been forced to admit that the Biden administration’s claims have no merit. 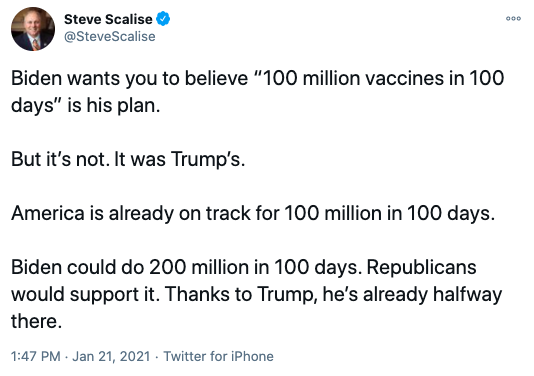 BOTTOM LINE: President Biden’s administration is trying to take credit for the rollout of vaccines developed, produced, and distributed under President Trump. In the words of President Obama, “you didn’t build that!“