TOPLINE: President Biden’s budget speaks volumes about Democrats’ disconnect from reality. The American people should be concerned with the disastrous effects such reckless spending and enormous tax increases will have on their wallets and standard of living.

While President Biden and House Democrats attempt to sell the American people on enormous spending increases, working-class Americans are worried about Biden’s $6 trillion budget and who will pay for it.

Biden is proposing tax increases that will exceed $3 trillion over the next 10 years. He wants to hit Americans and small businesses by increasing investment taxes, raising the top personal income tax bracket, and letting the 2017 tax cuts for individuals expire.

In each year of Biden’s budget, government spending as a share of the economy would be at its highest since World War II, with the exception of 2020 and 2021, which were higher because of the trillions of dollars in federal spending towards the unprecedented COVID-19 pandemic.

What is truly shocking is that if Biden’s full agenda was enacted, his administration expects that the economy would grow at just under two percent per year for most of the decade after accounting for inflation. 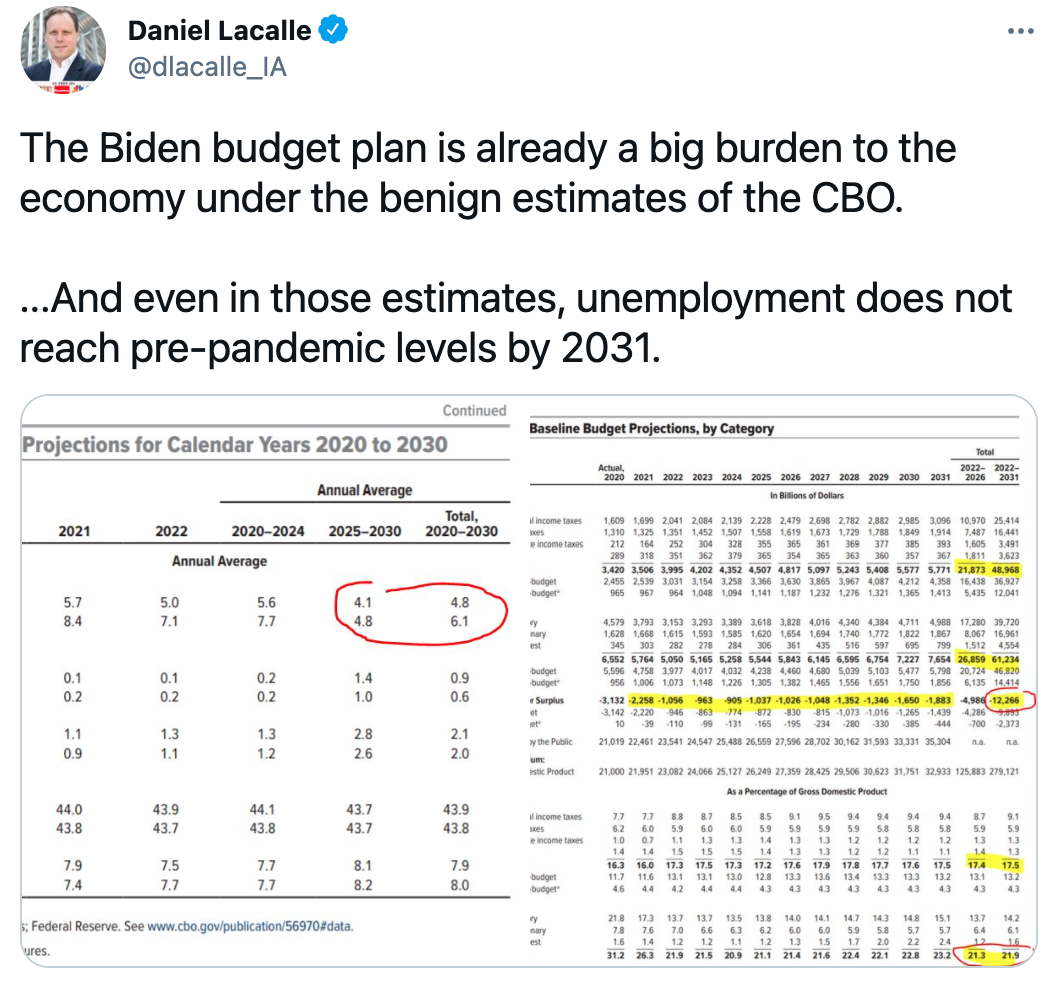 The Biden Administration’s plan for a bigger government will keep American workers and our economy stagnant. 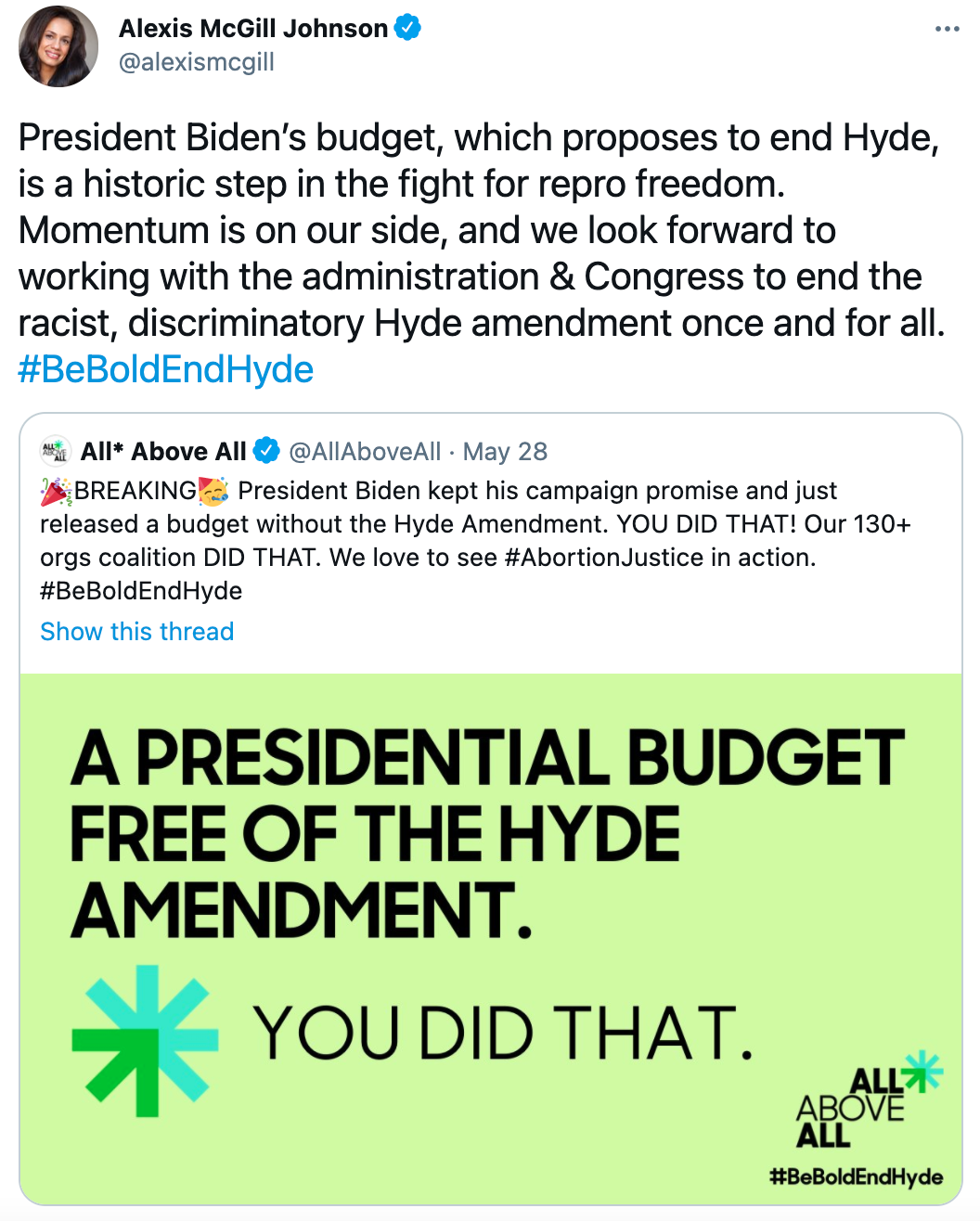 Biden made good on his promises to the radical left by eliminating the 45-year old Hyde Amendment — a policy that has saved nearly 2.5 million babies from abortion.

If President Biden’s proposed budget was “for the people” like Speaker Pelosi insisted, it would not force American taxpayers to subsidize government-funded abortions, which a recent poll shows that a majority of Americans are against. Acting on behalf of the American people isn’t of interest to the Biden Administration, especially when the will of the American people is at odds with progressive policy.

At a time when Americans are reeling from the economic turmoil imposed by the pandemic, Biden’s suggested budget includes nearly a 10 percent bump in foreign aid funding. Shouldn’t President Biden be focusing on those struggling inside the United States before prioritizing funds for the United Nations and the Green Climate Fund?

Biden’s budget would seek to increase the United Nations’ contributions, including restarting funding for Palestinians and restoring funding for the World Health Organization (WHO), which failed to produce the final word on the origins of the COVID-19 pandemic and the Chinese Communist Party’s liability.

Continued Ignorance of the Crisis at the Border, Proposed Spending Cuts to Essential Security Infrastructure

President Biden announced limited budgetary increases, and even budgetary decreases, for the entities tasked with dealing with the growing national security and public health crisis along the U.S.-Mexico border.

Instead, Biden’s budget proposes nearly $1 billion in funding to Central America and over $300 million in funding to immigration services, leaving America’s southern border at continued risk, while cutting funding for critical security programs, including the U.S. Customs and Border Protection, amid the ongoing crisis along the border.

The proposed budget will include no additional funding for border wall construction. The Department of Homeland Security (DHS) under Biden’s leadership has signaled minimal concern over the long-term impact of the current border crisis. 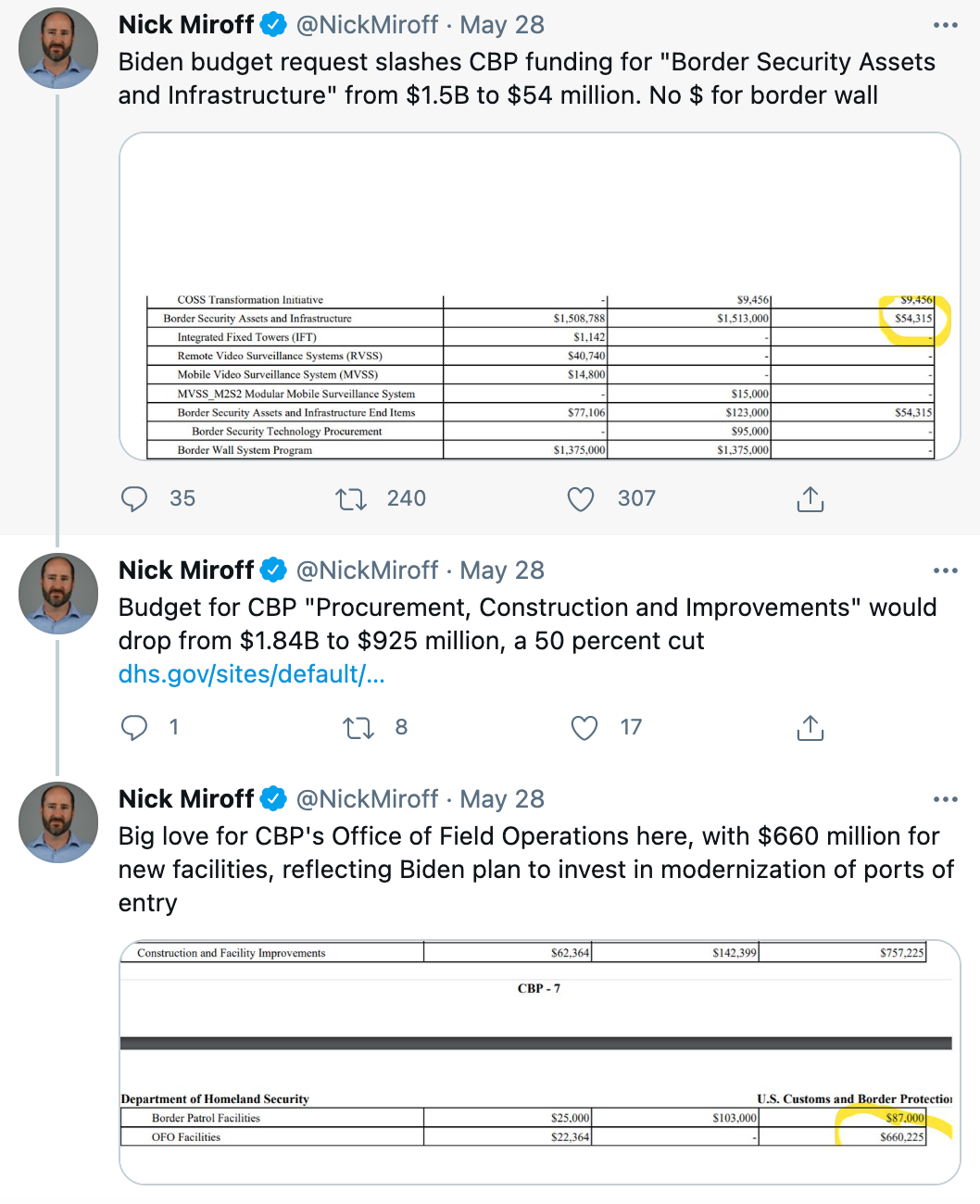 The budget process has also been used as an opportunity to shift focus away from Vice President Harris’ failures with the border crisis. The White House believes that propping up the economies of Central America will dissuade their citizens from trying to take advantage of the Biden Administration’s open-border policies. 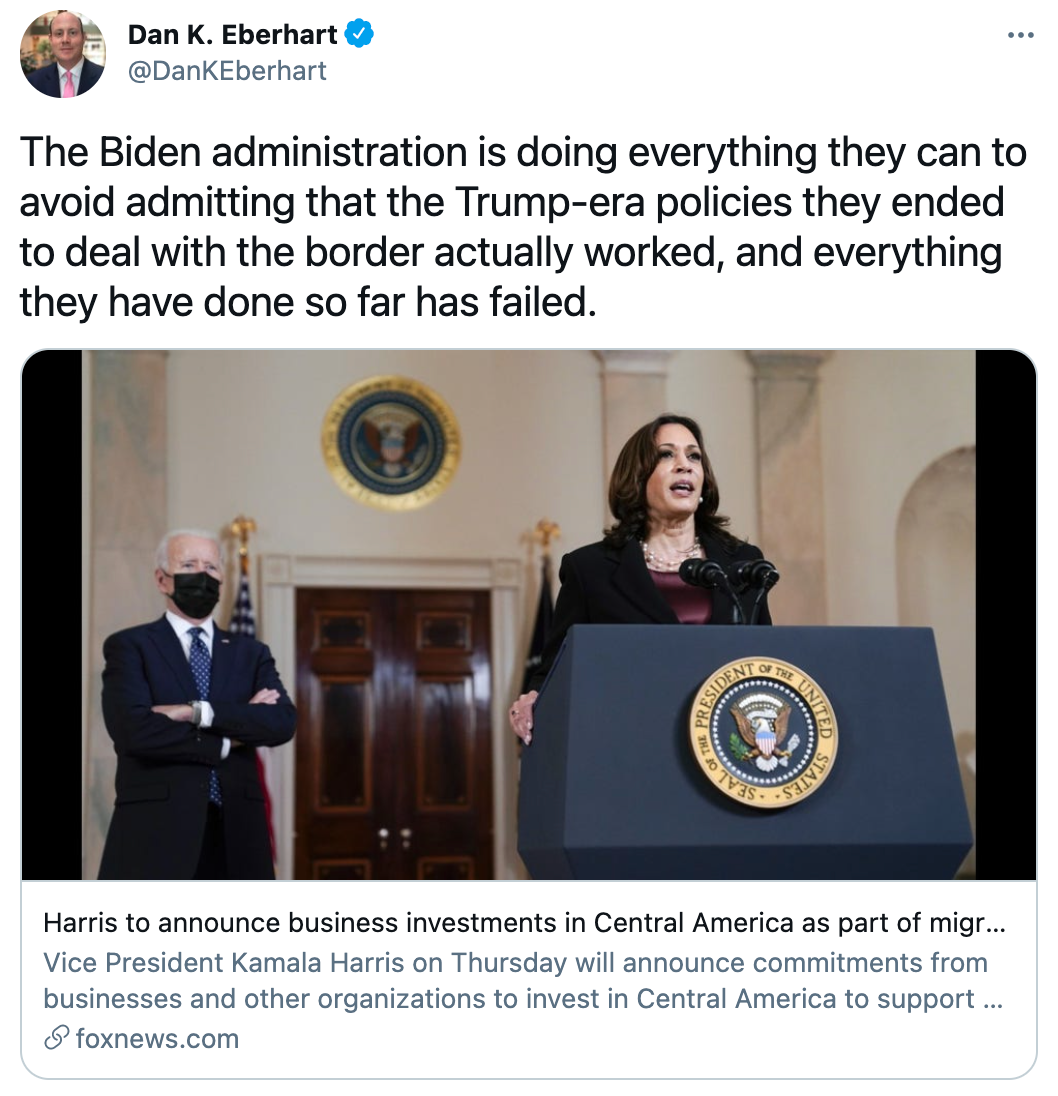 President Biden’s budget confirms his administration’s disregard for the current border crisis, in essence abandoning the Americans who have been negatively impacted by the unprecedented surge of migrants illegally entering the United States.

The U.S. Consumer Price Index has signaled dangerous inflationary growth, increasing 4.2 percent in the last year. Since May of 2020, lumber prices have risen over 300 percent, corn and copper prices have both increased by 102 percent, and coffee prices have increased by 51 percent. Shockingly, Biden is attempting to reverse American energy independence, and his incompetent leadership ended the Keystone pipeline and enabled gasoline prices to rise by 72 percent. 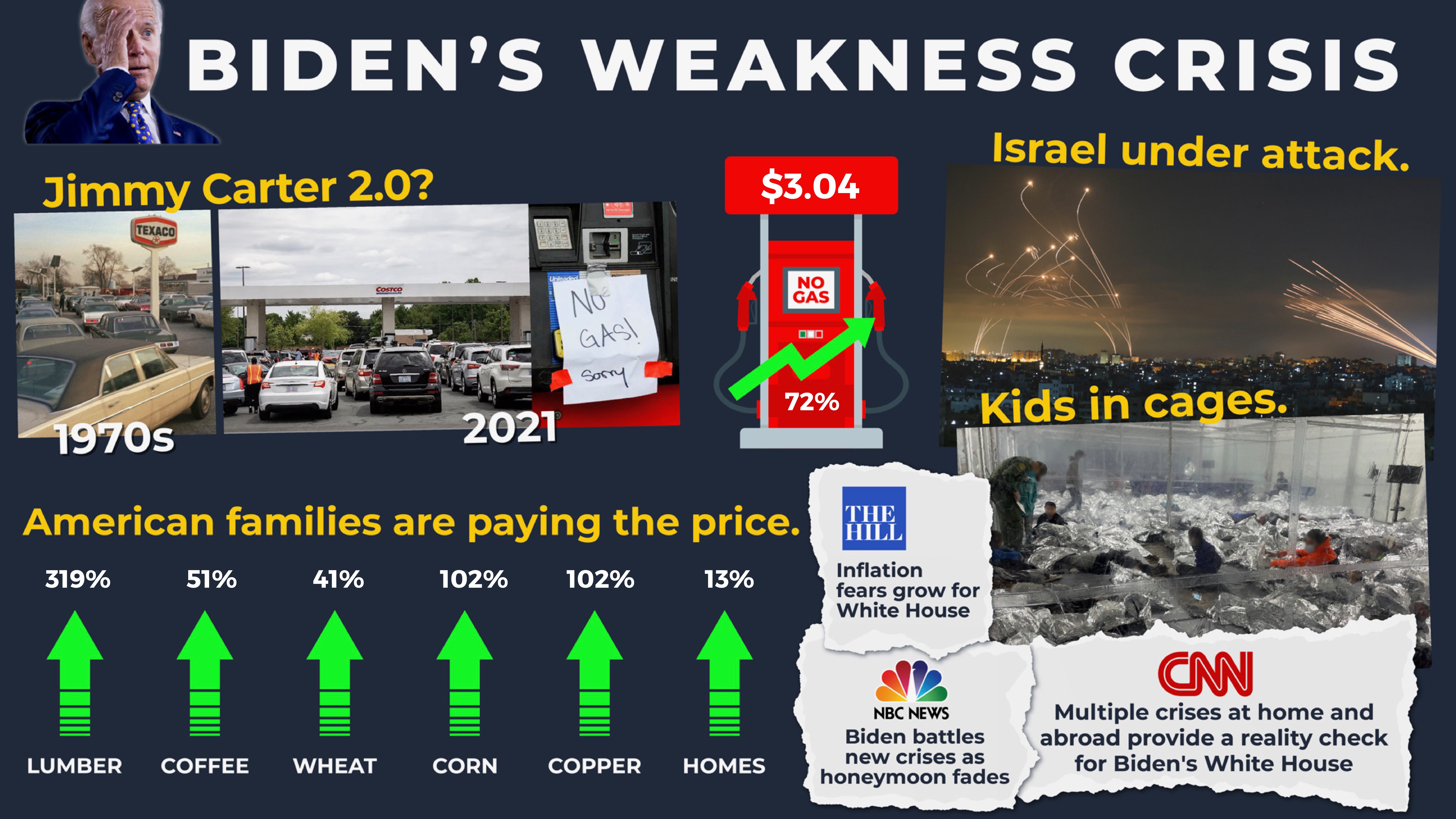 The outlook on U.S. inflation and higher consumer good costs creates a barrier to success for the hundreds of thousands of Americans who are trying to return to work.

The introduction of Biden’s budget proposal comes at a time when the Consumer Price Index rates are comparable to the 2008 recession, and the spending levels are reminiscent of World War II. 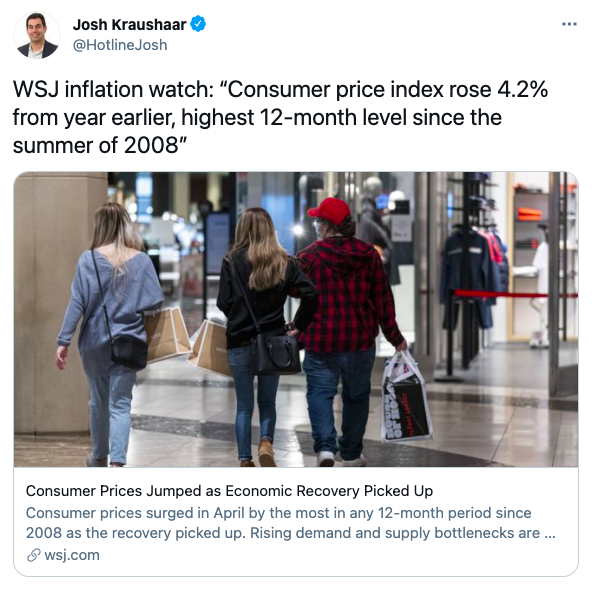 President Biden’s budget proposal prioritizes climate change and left-wing expenditures over the needs of everyday Americans. The rest of America is left wondering when the President will stop pandering to the far-left and start protecting the interests of the middle class.

BOTTOM LINE: The American people lack confidence in the ability of President Biden to guide the nation effectively. President Biden has neglected mounting debt, rising inflation, and a downtrodden economy, instead prioritizing leftist social policies that put the United States last. To initiate a considerable economic recovery, Americans are in desperate need of a healthy economy when powered by a responsible fiscal agenda. With President Biden at the helm, Americans will face rising inflation and fleeing jobs.