TOPLINE: President Biden’s weak leadership is resulting in an unprecedented level of crises that are hurting the American people and our allies around the world. From canceling the Keystone pipeline, preventing students from returning to school, reversing President Trump’s successful immigration and border security policies, and failing to stand with Israel, Joe Biden has hurt America’s reputation on the world stage.

The Biden Administration has created an out-of-control surge of illegal immigrants and drugs along the U.S.-Mexico border through promises of amnesty and open borders.

According to Customs and Border Protection (CBP), there has been nearly a 270 percent increase in the number of migrants apprehended compared to April 2020. More fentanyl seizures have occurred at the border in the last seven months than the entire year before.

President Biden refuses to take responsibility for his actions, even releasing monthly border numbers after hours with no notification to reporters, and Vice President Harris, who has been tasked with handling this crisis, has yet to visit the U.S.-Mexico border, with no plans to visit the border until early June. 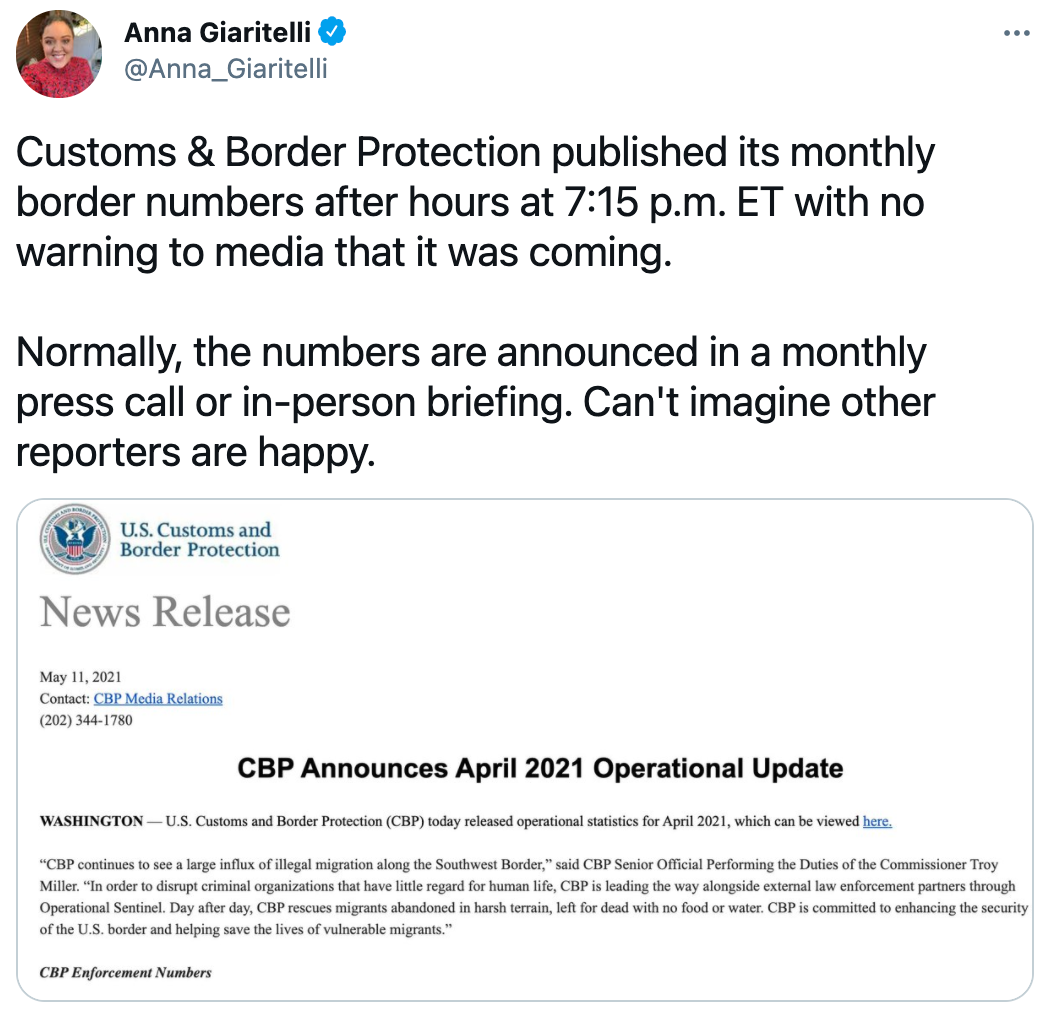 After taking office, President Biden terminated the Migrant Protection Protocols enacted by President Trump, which required asylum seekers to wait for their hearings in Mexico rather than being released inside the country.

Biden also axed the asylum agreements Trump negotiated with Guatemala, El Salvador, and Honduras, requiring asylum seekers to remain in the first safe country they enter — the prevailing standard for asylum seekers in the European Union and Canada.

Biden has replaced these policies with the Obama-era process of “catch and release,” where illegal aliens claiming asylum are detained, processed, and released inside the United States as they await their hearing — which usually takes years. After being released, these COVID-positive migrants can potentially spread the virus to those they encounter, putting numerous lives at risk.

Additionally, the Biden Administration is not keeping migrants six feet apart in detention facilities and does not test them for COVID before they are transported to another detention center, violating their guidance for American citizens.Dr. Anthony Fauci testified, under oath, that President Biden’s housing of migrants in overcrowded facilities violates CDC guidance regarding social distancing and mask wearing. 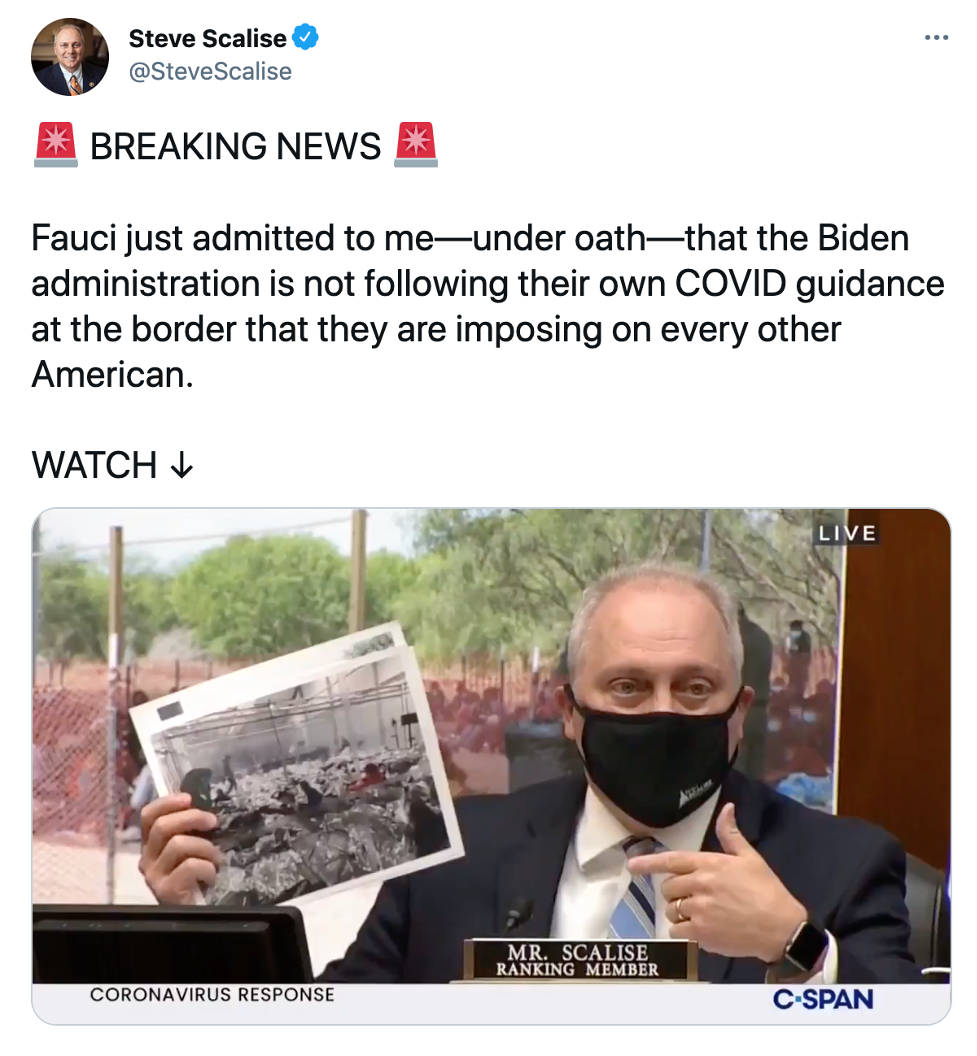 Despite a desperate need for economic stability, the Biden Administration has done little to account for an exponential increase to U.S. inflation, as evident by an annual increase of 4.2% to the Consumer Price Index.

In fact, the Biden Administration’s solution to the concerning inflation trends is geared around massive spending patterns, most notably displayed in the $2.3 trillion spending proposal in President Biden’s American Jobs Plan.

The never-ending spending patterns of the Biden Administration driving inflation are ever-present in the $6 trillion in the subsidies of the administration’s flagship relief and infrastructure bills, with Republicans in the dark on policy negotiation despite President Biden’s promises of unity.

The Administration appears to lack leadership on the matter, with White House Press Secretary Jen Psaki displaying severe concern over the state of inflation. At the same time, Treasury Secretary Janet Yellen doubled down on making current inflation rates a non-issue.

In the wake of this concerning inflationary cycle, the Biden Administration’s first jobs report touted just 266,000 new jobs, with pre-report estimates expected to come in at one million new jobs.

This disconnect between reality and expectations shows how out of touch Joe Biden is about job creation. Every small business across the United States is looking for workers, and Joe Biden is paying people not to work. Eight million jobs are going unfilled because President Biden is discouraging the unemployed from returning to work.

With the world watching, President Biden weakly condemned the violence against Israel, and the White House is spinning Biden’s actions as “quiet, intensive diplomacy.”

America’s support of our strongest ally in the Middle East should never be “quiet.”

President Biden quickly sought to take credit for the brokering of the cease-fire orchestrated by others filling the void of American leadership.

The news from the Middle East reminds us of the grave threats that constantly surround Israel and the true dangers posed by Iran, Hamas, and the Palestinian Islamic Jihad. Sadly, many Democrats will not condemn the ceaseless attacks against the Israeli people, let alone affirm Israel’s right to self-defense.

Iran is the leading state sponsor of terrorism, yet the Biden Administration has prioritized a nuclear deal with Iran instead of making a full commitment to continue our robust support for Israel and rebuke the growing chorus of anti-Israel Democrats who want to unilaterally disarm Israel.

As Iran’s proxy, Hamas is firing rockets with the clear intent to kill Israeli citizens.

The United States must stand with its strongest ally in the Middle East. Unlike Congressional Democrats, Republicans are committed to ensuring that the United States fully upholds its commitment to Israel and continues to support critical missile defense programs, which have saved thousands of lives from the destruction Iran, Hamas, and other terrorist groups are seeking to rain upon Israel.

Biden Listens to Radical Teachers Unions Instead of Scientists

For months, the Biden Administration has resisted commonsense efforts to reopen classrooms safely. The White House has made excuse after excuse, despite having tens of billions of dollars in funding from Congress to send children back to school.

Earlier this year, despite scientific studies and evidence, Randi Weingarten, the president of the American Federation of Teachers, the second-largest teachers union in America, questioned the CDC’s decision to revise social distancing guidelines in classrooms from six feet to three feet. 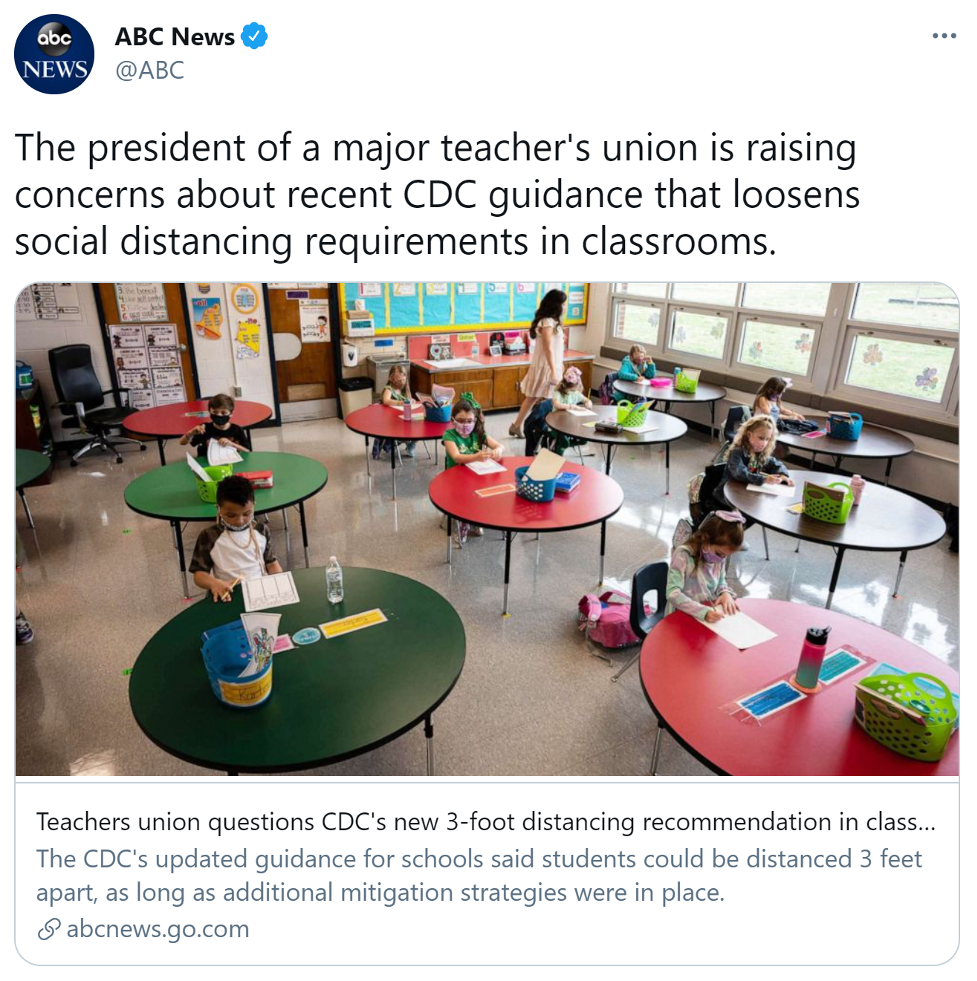 Now the American Federation of Teachers has changed its tune, and President Biden has followed suit.

In an interview with C-SPAN, Randi Weingarten admitted that the Biden Administration asked for language for CDC school reopening guidance, and the CDC used their language nearly word-for-word. 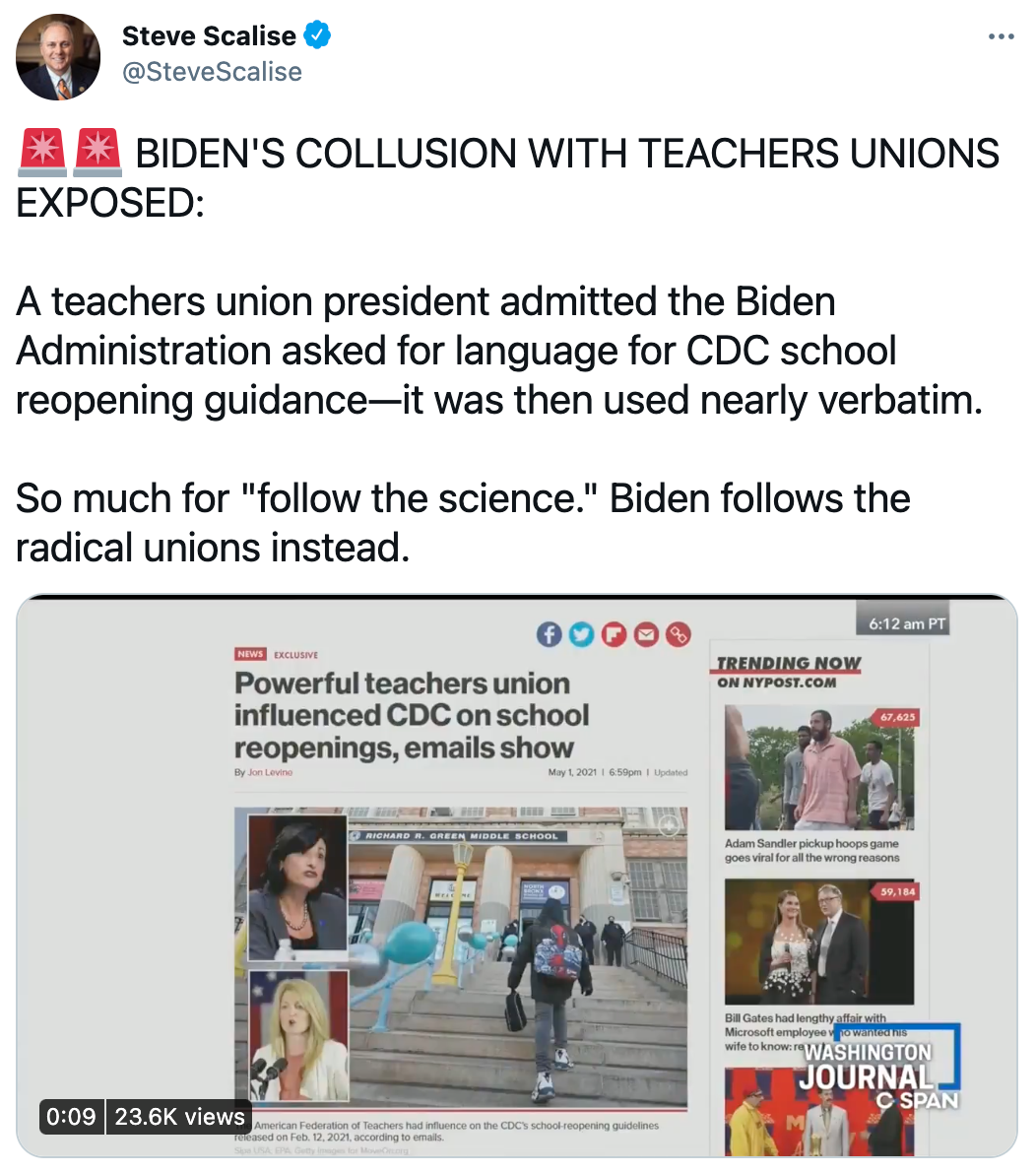 After more than a year of school closures, we are seeing union bosses, and not scientists, dictate the Biden Administration’s position on whether or not students can resume in-person learning.

President Biden has taken steps to reverse our nation’s energy dominance in less than five months, resulting in a less secure country, higher energy prices for hard-working families, and thousands of Americans fired from their jobs.

On his first day in office, President Biden revoked the Keystone XL pipeline permit leading to 2,000 American workers losing their jobs, even despite his own Energy Secretary pointing to pipelines as the “best way” to transport fuel. Killing this essential project means more than $2 billion in wages will go unpaid to American workers, and rural communities will lose $100 million in property tax revenues. 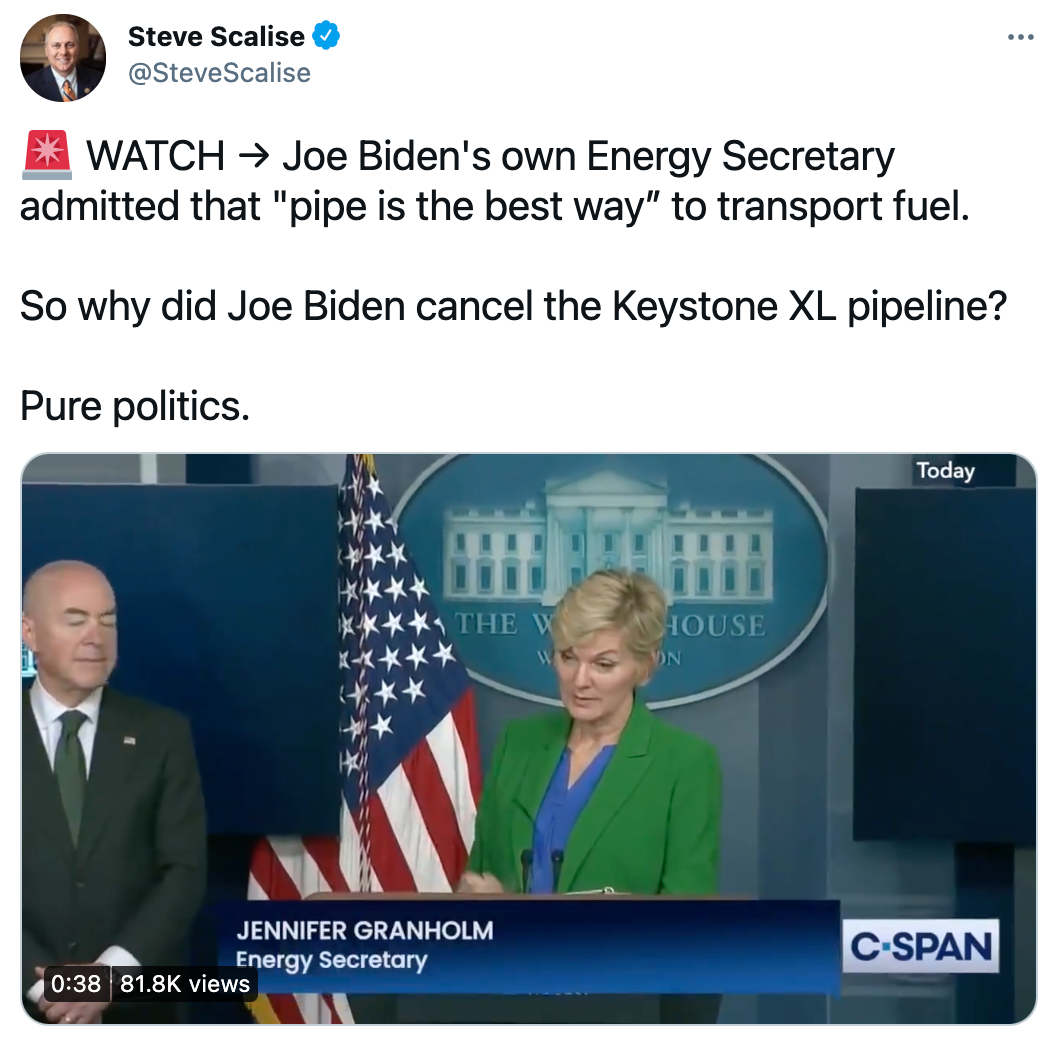 President Biden’s shameful decision to terminate the Keystone XL pipeline has done immense damage to our economy, harmed relationships with our allies, and betrayed the workers and communities that relied on the project.

How can the Biden Administration cancel the Keystone pipeline which would advance North American energy dominance but do nothing to stop Russia’s Nord Stream 2 pipeline, which is subject to sanctions and increases dependence on Russian natural gas? 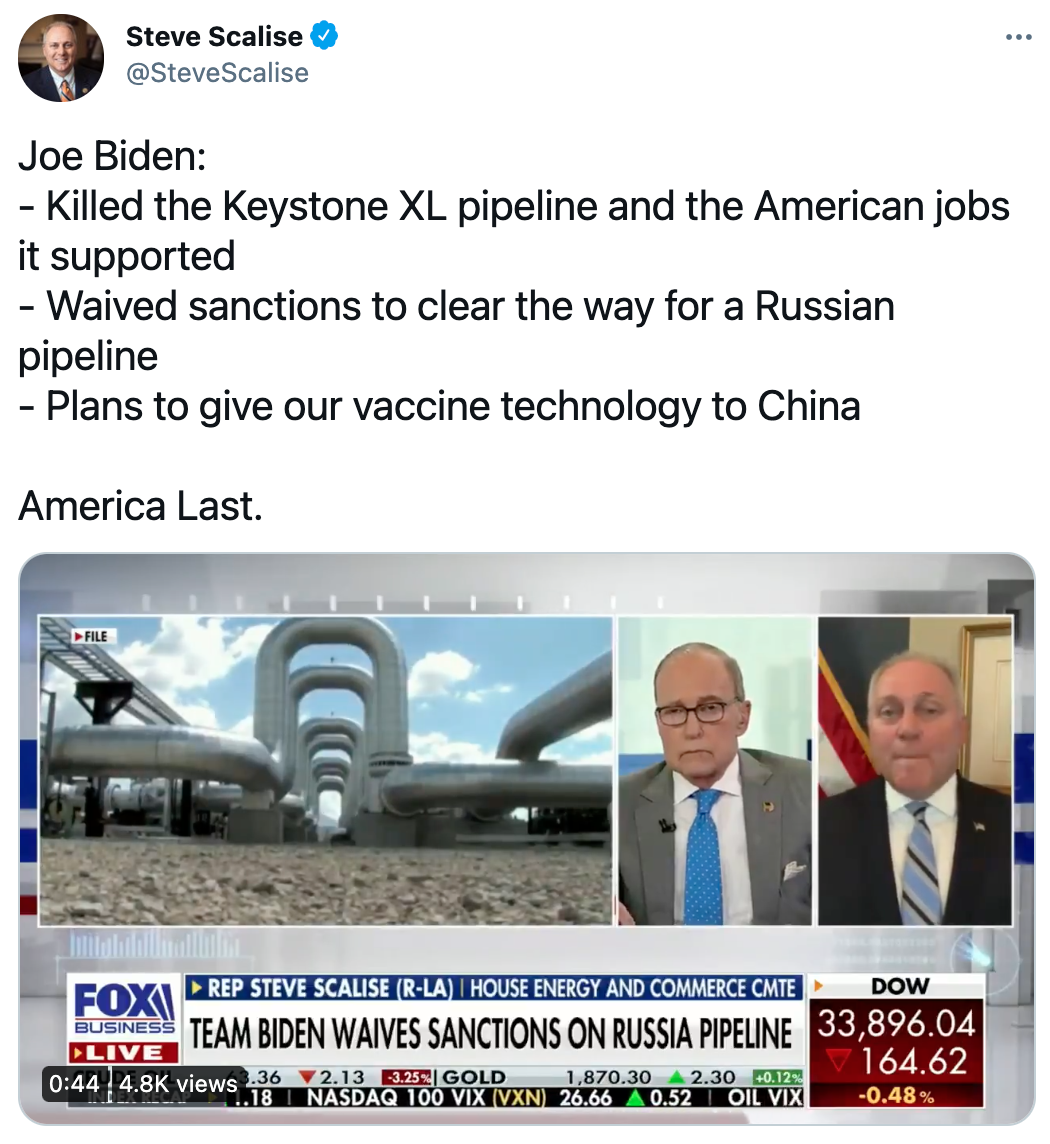 Earlier this month, the Biden Administration waived sanctions on an ally of Vladimir Putin, who is responsible for building the Nord Stream 2 gas pipeline from Russia to Germany. This decision hurts Americans at home and our allies abroad.

When President Biden mandated that the United States officially rejoin the Paris Climate Agreement, it was an insult to the millions of American families already struggling to afford their heating and utility bills.

The Paris Climate Agreement gives a free pass to the world’s worst polluters. It restrains the American energy and manufacturing industry, which produces goods and energy more efficiently than anywhere on the planet. Biden will hand over these energy jobs to countries like China and India, which emit significantly more carbon than we do now, and are allowed to increase their emissions through 2030 under the flawed terms of the agreement.

Estimates show that the reduction in manufacturing necessary to comply with our prior unrealistic Paris Climate Agreement mandates would destroy hundreds of thousands of American jobs – including many of the energy jobs that are so critical to our economy.

This offshore drilling ban has hurt American energy workers, consumers, and families who depend on low-cost electricity, as well as public schools and first responders funded by oil and gas tax revenues.

By banning a significant source of America’s oil and gas supply, President Biden is shipping American jobs and energy production to countries that don’t adhere to the same environmental standards as the United States.

President Biden’s actions threaten the economic livelihoods of millions of American families and must be reversed. Additionally, these leases bring critical dollars for coastal restoration, flood protection, and countless other public services in the states that host these activities.

BOTTOM LINE: President Biden’s disastrous agenda has resulted in thousands of jobs lost across the country, higher energy prices for millions of consumers, a massive spike in inflation, and the unemployed being discouraged from returning to work. How exactly is President Biden delivering on his campaign promise to “Build Back Better”?