TOPLINE: As the world watches President Biden deliver his State of the Union Address tonight, it’s important to remember that Biden has no plan to fix his self-made crises and make America great again. President Biden, Speaker Pelosi, and Congressional Democrats’ far-left, socialist policies are hurting middle class families, destroying the economy, raising our cost of living, and damaging our relationships with our international allies. Meanwhile, Vladimir Putin is launching an all-out invasion of Ukraine, which will have enormous consequences in the United States. The American people are suffering because of President Biden’s broken promises and weak leadership.

Bidenflation is Crippling the American People’s Personal FinancesThanks to President Biden’s out-of-control spending and destructive economic policies, inflation has reached its highest level in 40 years, with the Consumer Price Index rising by 7.5 percent from January 2020 to January 2021.

Gas prices remain at a seven-year high – levels not seen since Joe Biden was Vice President.

The average national price for a gallon of gas is at its highest level since July 2014. 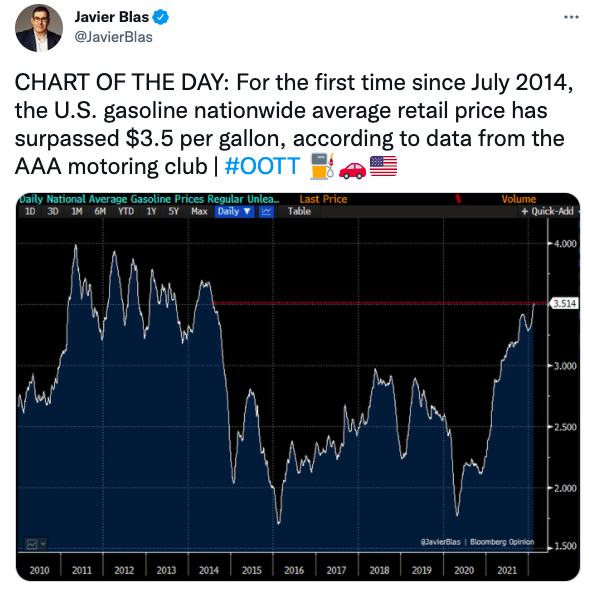 An increase in the cost of everyday goods and services disproportionately hurts lower-income families. Real average hourly earnings have decreased by 1.7 percent because of inflation.

On top of rising prices for everyday goods, costs for other essential services like health care are also rising. Seniors are seeing the largest ever Medicare Part B premium increase in 2022.

Moody’s Analytics concluded that inflation is costing American families more than $250 per month.

According to a poll conducted by ABC News/Ipsos, 75 percent of Americans said Biden’s economy was “not so good” or “poor,” while only one percent view the economy as “excellent.”

Democrats’ inflationary policies are hurting – not helping – the American people.

Biden’s Foreign Policy Blunders Embolden America’s Adversaries President Biden’s weak leadership and lack of foreign policy strategy have crippled the United States’ power and influence on the world stage. Afghanistan has fallen to the Taliban, China has ramped up its aggression against Taiwan, Hong Kong, and the Uyghurs, and now, Russia has invaded Ukraine.

This invasion will have immediate consequences here in the United States. American families are already facing an increase in energy prices – from the gas pump to heating their homes.

As the Biden Administration chooses to react rather than lead, tough action is needed quickly to halt Putin’s assault on Ukraine. Sanctions are not enough to stop this madman from further invading Ukraine and other Eastern European nations.

President Biden’s poor foreign policy decisions have fueled the rise of the Taliban and Russia’s aggression against Ukraine.

Last summer, the U.S. Embassy in Afghanistan was forced to evacuate after the Taliban overtook Afghanistan’s capital, Kabul.

Vladimir Putin — and the rest of the world — saw President Biden withdraw U.S. troops from Afghanistan without concrete plans to protect Americans and Afghan citizens or prevent the Taliban from taking over the country.

Ever since President Biden abandoned Americans in Afghanistan, Putin believes that he will do nothing to help the Ukrainian people against a Russian invasion.

The Keystone XL pipeline would have created thousands of jobs, helped maintain the United States’ global dominance, and transport oil from Canada, an ally and one of the world’s cleanest oil producers, to U.S. refineries.

However, President Biden revoked an essential permit for the Keystone XL pipeline, which weakened the United States’ energy security in the process.

President Biden chose weakness months ago when he canceled the Keystone XL pipeline but allowed the Nord Stream 2 pipeline between Germany and Russia days after Russian criminals hacked the Colonial Pipeline. Why would President Biden choose to eliminate American energy jobs and American pipelines but favor Russian jobs, Russian pipelines, and Russian dominance over our allies?

Putin’s aggression toward Ukraine can be traced directly back to President Biden’s far-left energy policies that have limited American energy production and made the United States more reliant on countries, like Russia, for oil.

Instead of weakening domestic energy development, President Biden should turn to America’s energy-producing states that could significantly contribute to an all-of-the-above energy strategy that utilizes American energy resources and protects U.S. energy security.

But sadly, President Biden, and his incompetent foreign policy, have created yet another example of America conceding on the world stage.

With No Rule of Law, Illegal Immigration and Crime SurgeSince President Biden assumed control of the White House, more than 2.3 million illegal immigrants have been apprehended attempting to enter the United States. This number surpasses the population of Houston, Texas – the fourth-largest city in America.

To add insult to injury, a court filing revealed that more than 62,000 illegal immigrants were released into the United States in January.

In President Biden’s first 100 days in office, he issued more than 94 executive actions on immigration, including halting the construction of President Trump’s border wall and ending the Trump Administration’s successful “Remain in Mexico” policy.

Now, as a result of the Biden Administration reversing President Trump’s successful border security and immigration policies, migrants carrying illicit substances are attempting to enter the United States at an alarming rate. In January 2022, U.S. Customs and Border Protection captured 839 pounds of deadly fentanyl at the southern border.

Sadly, fentanyl overdoses are now the leading cause of death for Americans aged 18-45, and the U.S. Drug Enforcement Administration found a “direct link” between Mexican cartels and fentanyl-related overdose deaths.

Democrats’ discontent for the rule of law enforcement extends well beyond their efforts to open America’s borders and give mass amnesty to illegal immigrants. Violent crime and murders are increasing because Democrat-run cities slashed funding for their police departments and implemented anti-law enforcement policies that incentivize malicious behavior and let vicious criminals back into their communities.

The Fraternal Order of Police reports that in 2021, there were 346 officers shot in the line of duty, 63 of these officers died from their wounds. This is horrifying. There were also 103 ambush-style attacks on law enforcement officers, a 115 percent increase from 2020.

The statistics speak for themselves – Democrats’ far-left rhetoric, policies, and actions have jeopardized the safety of our nation’s law enforcement officers and vulnerable communities. 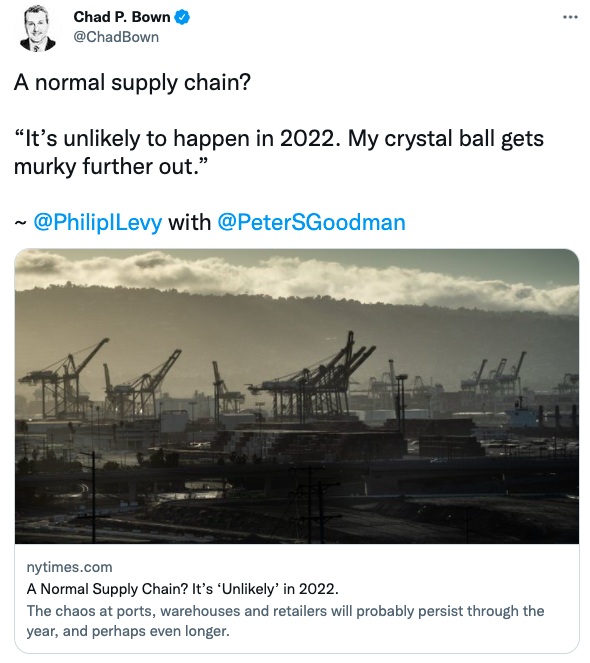 Materials and equipment are not being sent to factories as scheduled, shipments of finished products aren’t reaching distributors, and congestion at ports and other transportation bottlenecks are making it nearly impossible for shipments to arrive in stores on your doorstep on time.

President Biden has failed to deliver on his promise to provide relief from supply chain bottlenecks – cargo ships are now simply waiting farther out at sea.

In a survey conducted by the National Federation of Independent Business, 64 percent of small businesses cite the supply chain crisis as a reason they have had to raise their prices.

Regular Americans are paying the price and experiencing the consequences of the Biden Administration’s failing transportation policies.

President Biden, Speaker Pelosi, and Congressional Democrats have championed mask mandates in schools, even when there were no clear benefits for children. Republicans have said from the beginning that mask mandates do more harm to children than good. Children need to see facial expressions in order to understand emotions, process language, and learn word pronunciation. Dr. Lucy McBride, a well-respected physician in Washington, D.C., believes that masks can negatively impact a child’s ability to learn. In an interview, she said that children “need to see faces to develop emotionally and socially at those ages.” House Republican Whip Steve Scalise and Senate Republican Whip John Thune published an op-ed about the need to unmask America’s schoolchildren and how Democrats’ inconsistent masking guidelines are harming kids’ social, emotional, and educational development.

Democrat policies, supported by the Biden Administration’s guidance, are making it harder for women to return to or stay in the workforce. Mothers want to return to work or look for jobs, but onerous and unscientific COVID policies continue to disrupt in-person learning at schools and the reliability of daycare centers. Now that the polling shows Democrats’ handling of COVID is tanking, Democrat politicians and the Biden Administration are suddenly dropping their mask mandates and changing their metrics for mask-wearing.

The Biden Administration’s vaccine and masking mandates and extended lockdowns have been devastating for America’s children and the parents who care for them.

BOTTOM LINE: Instead of defeating COVID-19 and unifying the country like he promised, President Biden has worsened our divisions and made Americans poorer and less safe than when he assumed office. Under the Democrats’ control of Congress and the White House, energy costs and the price of everyday goods have skyrocketed, our enemies no longer fear us, violent crime is on the rise, our supply chain is broken, and unvaccinated and untested illegal immigrants are welcomed into the United States while deadly fentanyl flows over our open border. Congress has a responsibility to correct President Biden’s spineless leadership and prioritize parents, workers, and small businesses.