Whip Scalise also discussed the alarming increase of Coronavirus cases in Louisiana, and how targeted relief in the CARES Act will provide support for our hospitals and heroic front-line healthcare workers, along with Louisiana’s state and local governments. 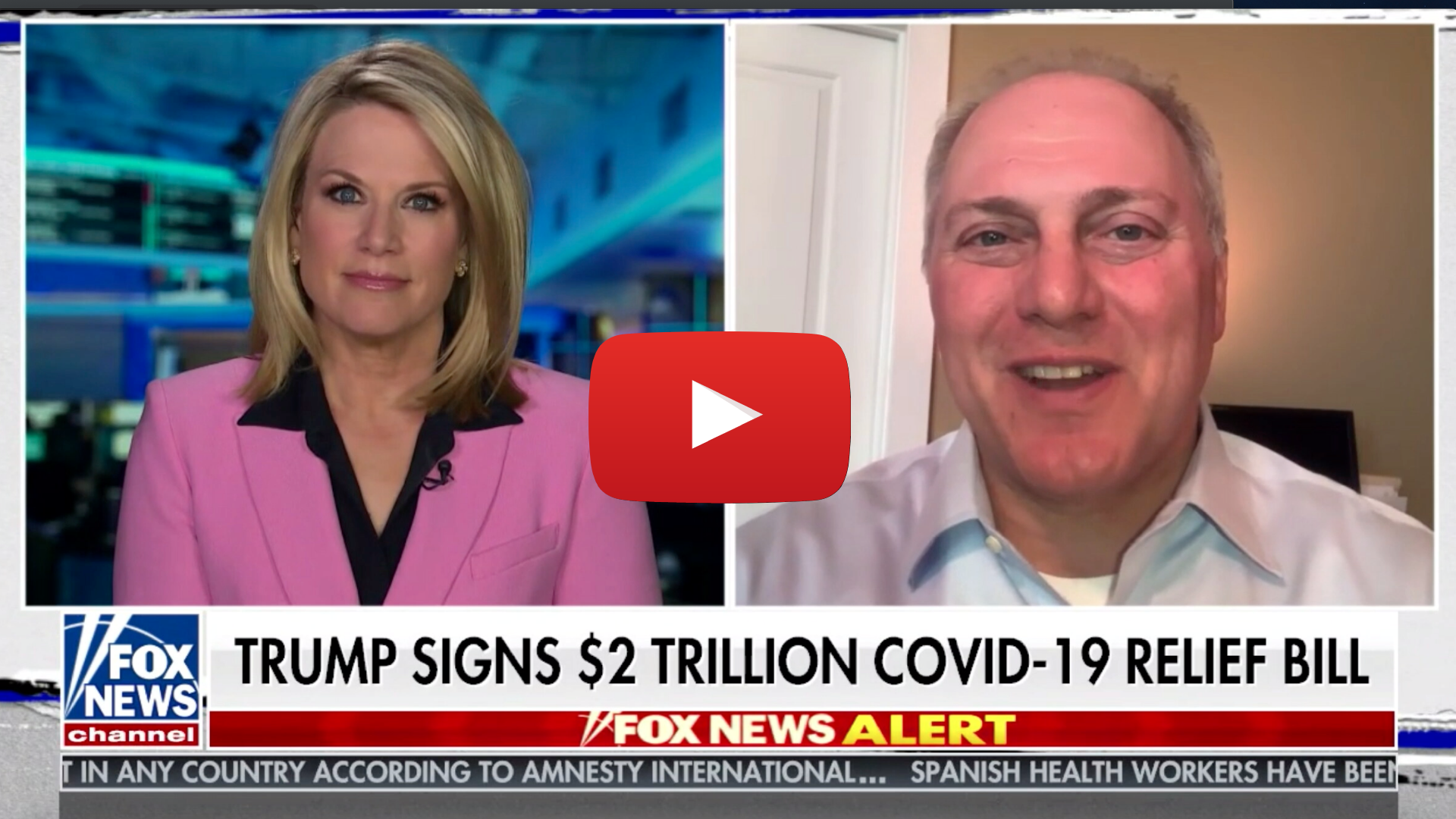 Click here or on the image above to watch The Story with Martha MacCallum interview. 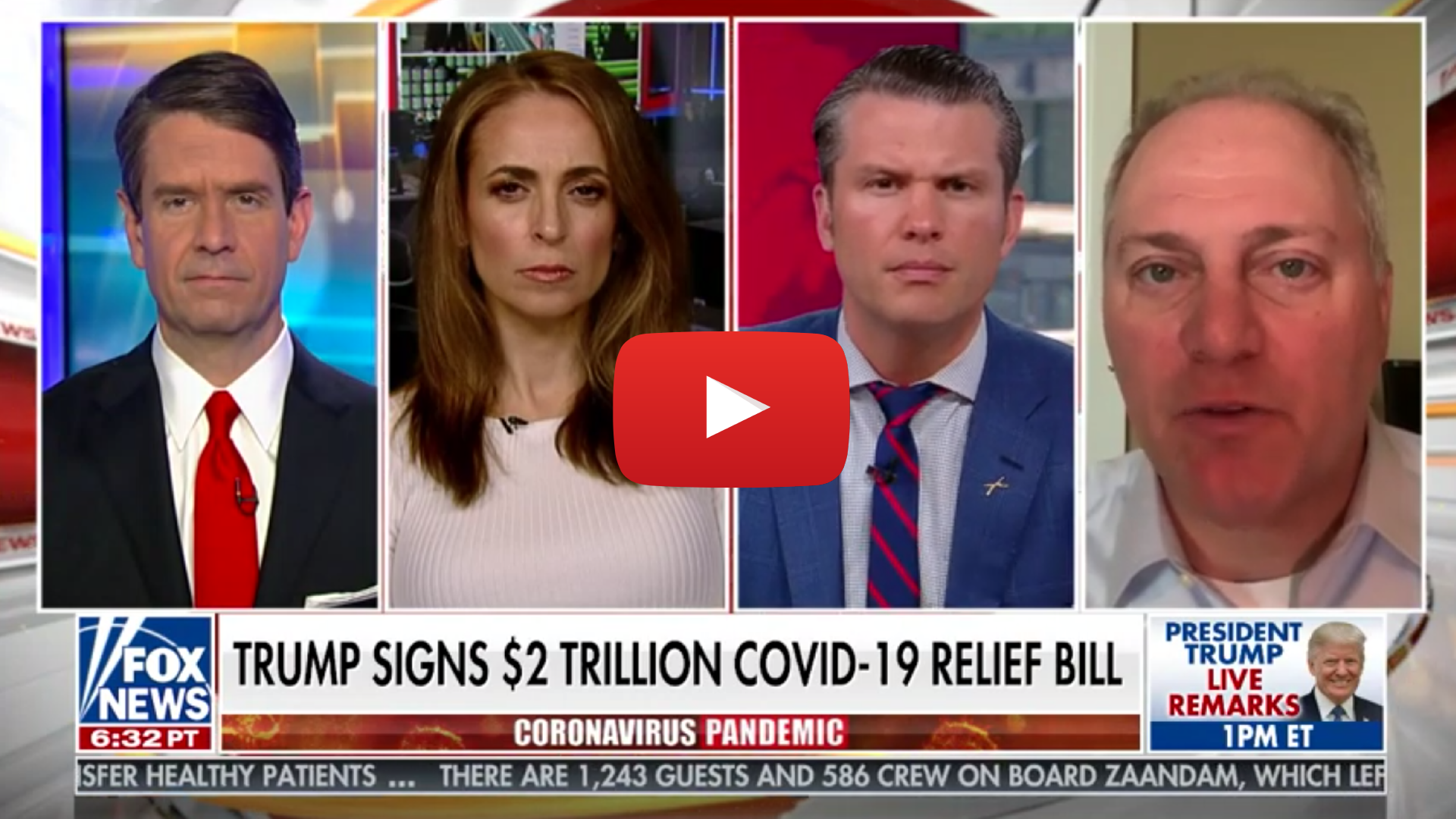 On the CARES Act providing much-needed relief to families, small businesses, and hospitals:

“We worked hard the last few days with a lot of my colleagues to make sure we got the votes and the policy right, more importantly, to pass this major relief bill, the CARES package, and that’s going to be something that’s going to be a lifeline to so many families and small businesses who are really hanging on by a thread right now. So, President Trump and his whole team, Secretary Mnuchin worked incredibly hard. And you saw Republicans and Democrats come together, including today on the House Floor. So, you know, it was something that was very necessary to get this done quickly to get relief to those families and businesses quickly so that you don’t see the mass layoffs. We’ve seen a lot, millions of people going on the unemployment rolls, this hopefully will stave that off. This bill, it’s got some really important small business loans through our local banks that will participate in this to get that much-needed relief to our businesses so that they can hold on to their workers.”

On ensuring small businesses and employees have a strong economy to return to:

“Clearly, you’re concerned about the cost of it. And, you know, you talk about a 2.2 trillion-dollar package, largest package we’ve ever passed, the whole federal budget is a little over three and a half trillion dollars. But if you also look at the other side of that, when you talk about over three million people on the unemployment rolls in one week with like you said, more to come, those are people that aren’t paying payroll taxes, they’re not paying Social Security taxes, we need to get this economy back up and running. We have to have an economy for people to go back to, and that’s really what this bill that was passed today in Congress was all about is making sure we can have jobs for people to go back to so that we can have an economy that can fund what was the greatest economic engine in the world. When you saw where we were just a month ago, and President Trump’s really focused on making sure that we can have that economy to come back to. And so clearly, there were some unprecedented actions that had to be taken, not only by Congress, but what you’re seeing out of the Fed with the easing of money, with commercial paper being released, but to make sure banks have the ability to get that money out there so they don’t have to foreclose. I mean, can you imagine if you had millions of small businesses filing bankruptcy and banks having to foreclose on worthless assets? Is that really where we want to go? I don’t think so, and so I know for those people anybody can be a naysayer, but I think everybody knows we’re in unprecedented times, we’ve got to make sure we have an economy to go back to, and the damage that would happen if we didn’t have all of those businesses intact would be much worse.”

On the high volume of Coronavirus cases in Louisiana:

“It’s really concerning what’s happened in New Orleans right now, and I’ve talked to the Mayor of New Orleans and worked with the Governor on a number of things to get more relief down there, to get more tests which we were able to do to get some test pods. You know, there’s a nursing home in my district where 11 people died already, and it’s tragic. We were able to get the CDC to send an expert down there to help work with them. But look, if you see New York, they’re probably at the high end of the spike and we’ve always heard Dr. Fauci and others talking about the spike going up, and then ultimately coming back down. And so, our main focus has been working with our hospitals to make sure that they’re not overwhelmed and clearly, they’re being pushed to the limit. And, by the way, our health care workers are doing phenomenal work right now on the front-line risking their own lives and safety, but doing the job to make sure that they keep people safe. And so, I appreciate the work they’re doing but they need help. This bill, by the way, gives them a lot of help too.”

“I think when you see the rest of the country, when you see the spike come down. And there are some communities, by the way, that haven’t had it hit where they know it’s probably maybe a week or two behind where we are. Just like where you saw China. China was over a month ahead of where we were because it started in China. We wish they would have been more transparent with us about it, but ultimately that caused it to come here in a delayed way and so it’s hitting some cities like New York and New Orleans harder today, but then we’ll ultimately come back down from it and you’ll see other communities get it. But I think everybody around the country has recognized how serious it is. You’re seeing people stay at home when they can, when they go out they’re keeping distance and they’re washing their hands, that’s what we all need to do.”

On providing historic economic relief to through the CARES Act so our economy can return stronger than ever:

“When you have a problem like we have with the economy really being shut down in most sectors for over a week now, you saw great companies that were literally hanging on by a thread. This bill was really designed to help families and businesses so that we can have an economy to come back to when we get through this. There’s also a lot in there to help hospitals that are struggling too, so if you look at the bill, any large bill like this, and probably the largest relief package in the history of the country – $2.2 trillion – but clearly, a massive response to all of the massive things we’re seeing: layoffs, companies that are trying to figure out if they are going to be able to make it through this, this bill will really give them that ability to go get loans that can be forgiven to keep their payroll so that you don’t see millions more unemployed. Like you saw just last week, 3 million people that were added to the unemployment rolls, you can’t see an economy sustain itself like that, and this bill is designed to help those families, to help those companies stay afloat through all of this.”

On helping Louisiana get the necessary assistance from the federal government to combat the Coronavirus:

“In the last week, we saw New Orleans pop up to be one of the top hotspots next with New York, and you know, we’ve seen a number of additional cases going into the hospitals. We were able to work with the [Trump Administration] about a week and a half ago, to get an extra 7,500 tests kits and setup a new pod site, a pilot program in New Orleans that was setup in a few other cities that were hotspots, so you can test more people. Of course, that means there’s going to be more positives, but there is an increased number of cases and an increased number of deaths. There’s a nursing home facility in my district where we’ve already lost 11 people that have died, more positives in that facility. We got CDC to send an expert down just the other day. I’ve been working closely with our Governor, with our Mayor, and our local officials to make sure that we can get everything we can from the federal government to recognize the increased hotspot in New Orleans.”

“Well, you know, any time you see that number and like I said, 11 deaths at one facility is heartbreaking. It’s alarming, but you know, you see everybody coming together, federal, state and local to do everything they can. Clearly, like all of the other places in this country where they’re seeing outbreak, you know, we still don’t have a cure, they’re trying a lot of different new therapies, some that are proven for other things like Malaria, but there’s no one silver bullet for Coronavirus, so we’re going to continue working. I’ve been working with our local hospitals in New Orleans, and they’re doing heroic work. I know you all have pointed that out too. They are on the frontlines but they’re still going and helping patients, and setting up testing clinics at remote locations so that people can go there instead of the hospital to be tested and then if they have severe problems obviously you want the hospitals right now reserved for those people that have the most serious illnesses.”