WASHINGTON, D.C.—House Republican Whip Steve Scalise (R-La.) made the following remarks on the House floor prior to House passage of H.Res. 246, an anti-BDS resolution: 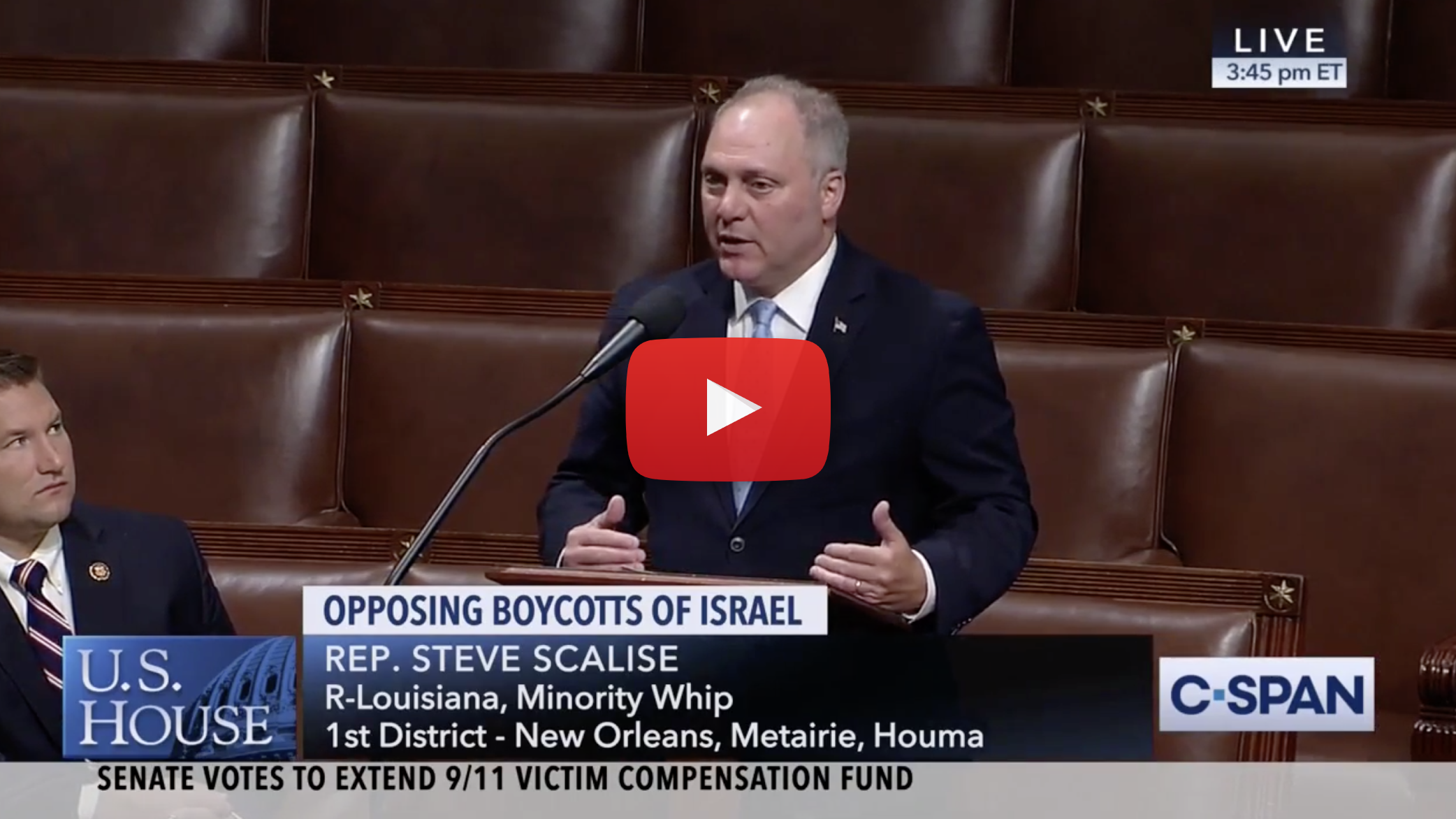 Click here or on the image above to watch the remarks.
Full remarks:

“Thank you, Mr. Speaker. I appreciate both of my colleagues from New York, the distinguished gentleman Mr. Zeldin and Mr. Engel for their strong leadership and standing up against this BDS movement. I think we all know what it’s designed to do. It’s designed to delegitimize Israel as a Jewish state and to undermine their economy, which ultimately goes to the heart of trying to bring down Israel by people who have been against a Jewish state and expressed anti-Semitism for decades.

“We all need to stand up against that. And so this resolution is incredibly important. As my other colleague just mentioned, our nations had a rich history of using boycotts to promote freedom. There are other boycotts that have been displayed to undermine freedom and that’s really where the BDS movement is in a very different category and I think we all need to make that distinction. If a boycott is being used to advance freedom, that’s when we should support.

“But if a boycott is being used to undermine the very freedoms that exist in the only real elected democracy in the Middle East, we all need to rise up against that as people who respect that great tradition that great love between the United States and Israel. An unbreakable bond — one that brings Republicans and Democrats together, we need to continue that tradition.

“But I would also add, Mr. Speaker, that as we are talking about why we need to oppose the BDS movement with this resolution, words are hollow if we don’t follow it up with action. And so at the same time, Mr. Speaker is hopefully we get an overwhelming, maybe unanimous vote on this resolution.

“It’s long past time that the Democrat leadership of this House bring up H.R. 336 by Mr. McCaul, the bill that actually puts teeth in the law to stand up against the BDS movement all around the world — here, even sometimes in Congress, or in other states. But in other countries where they’re trying to advance this movement, we need teeth.

“Words and action, so these are words today, we need to follow it up with H.R. 336, real action. I would urge that we stand strong together. And with that, Mr. Speaker, I would yield back the balance of my time.”