WASHINGTON, DC – Republican Whip and Select Subcommittee on the Coronavirus Crisis Ranking Member Steve Scalise (R-La.) opened the subcommittee’s Friday hearing on “Accountability in Crisis: GAO’s Recommendations to Improve the Federal Coronavirus Response” by welcoming but acknowledging the limitations of the Government Accountability Office’s recent report on federal response efforts to the COVID-19 pandemic. Whip Scalise emphasized that this has been the most substantial response to eradicate a virus and reopen our economy in recent memory, and once again called for China to be held accountable for hoarding medical supplies. 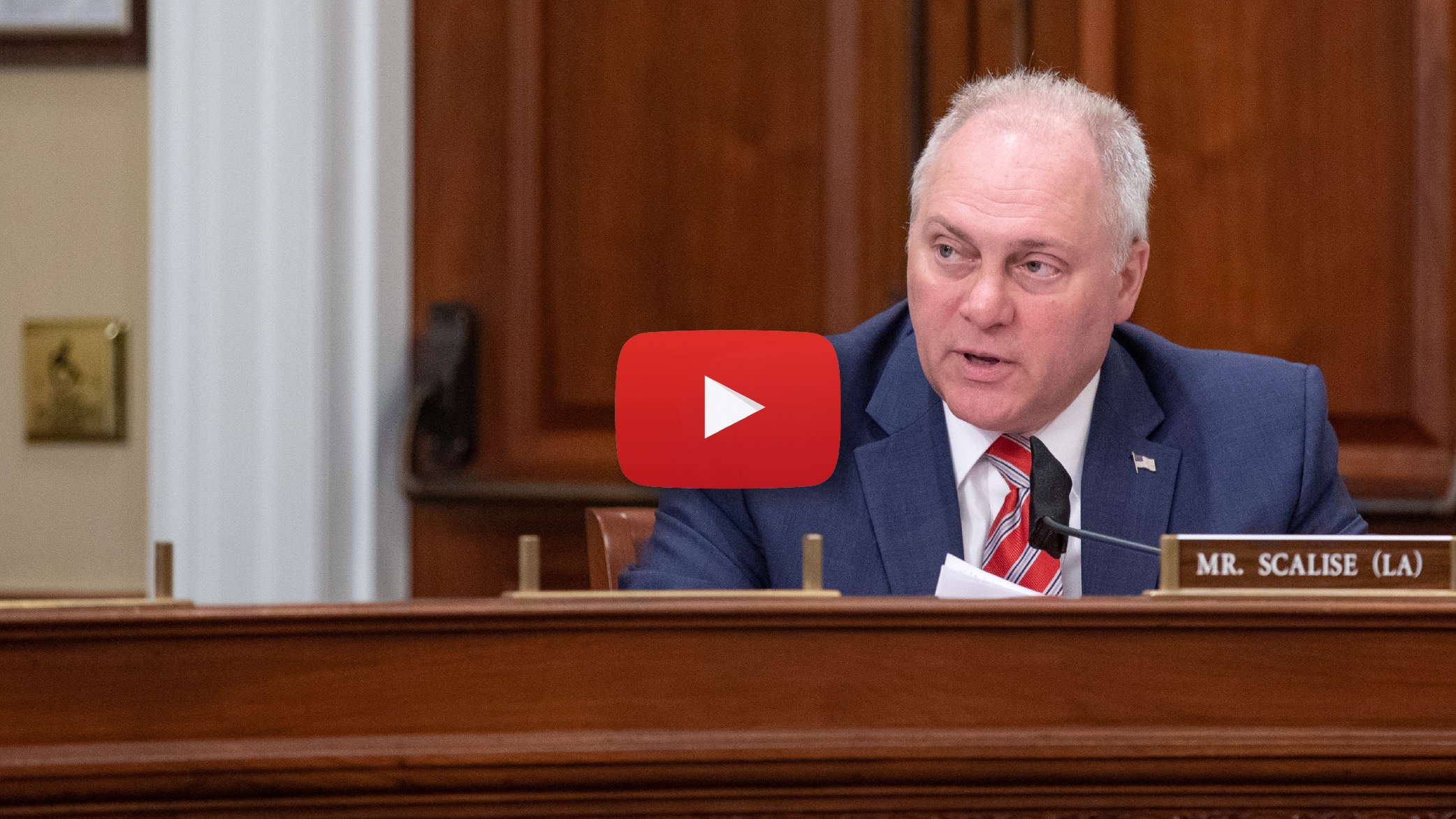 “Mr. Chairman, thank you for calling this hearing. I appreciate we are finally conducting an in-person hearing. You and I are both Whips for our respective conferences. In that role, I have listened to Republican rankers from every committee as well as rank and file members of every committee. Every single Republican Member believes hearings should be held in person. The meetings are more productive, more interactive, and have better results when Members are here, in person, doing our work.

“I want to begin by thanking the GAO for producing an initial report on the Federal Government’s response to the COVID pandemic in such a short period of time. An analysis of the largest and fastest relief effort in American history while that relief effort is still being implemented is a huge task. The report has some important insights and recommendations – but we should all recognize the limitations of the analysis. We asked – demanded in fact – that the federal government build a plane in midflight. The GAO report is an attempted assessment before the plane has even landed.

“Let’s start from the beginning. It is beyond doubt that the Chinese Communist Party actively engaged in a cover-up and suppressed doctors and journalists who attempted to warn the world about a novel, deadly virus. Senior Chinese leaders knew a pandemic was ongoing weeks before it was announced.

“During a critical period in December and January, China withheld evidence of the virus: evidence that confirmed human to human transmission of the virus, evidence of the extent of the spread. China refused entry of American and other medical experts from around the world for weeks. And during this time, China hoarded medical supplies like masks, gowns, and other life-saving PPE. Chinese exports of surgical masks, gowns, and gloves were stifled by the Chinese Communist Party during this period. China knew the danger posed by the virus and while they hid the truth, they used the time to stock up on vital medical supplies.  While Chinese authorities limited domestic flights from Wuhan to other Chinese cities like Beijing and Shanghai, China’s government urged international carriers to maintain their flight schedules – seeding the virus throughout the rest of the world.

“The WHO said as late as January 23rd, “This is an emergency in China, but it has not yet become a global health emergency. At this time, there is no evidence of human-to-human transmission outside China.” The WHO exists to stop pandemics.  We are told to trust the experts – and while China was hoarding PPE, and sending infected patients around the world, the WHO told the world not to worry.

“Sadly, we know how quickly the virus spread in America. The first death was February 29th – and in 4 months we’ve lost over 120,000 of our family, friends, and neighbors. The House passed the first COVID relief package on March 4th, five days after the first reported death. Congress passed another bill on March 14th. And on March 27th the President signed the CARES Act. Together these bills represent the largest relief effort in American history.

“We had shut down the economy. Overnight, millions of Americans were at risk of losing their jobs. China had put us behind on testing. Republicans and Democrats alike demanded speed. And thank goodness we did. 4.5 million PPP loans totaling over $500 Billion in 3 months! Lenders of all shapes and sizes – including large banks, community banks, credit unions, and non-banks – participated in the program. More than 5,400 lenders have participated to date. Mr. Chairman, we should hear testimony from the small businesses who were saved by the PPP.

“PPP has been a smashing success. But given the speed we demanded – and the overwhelming need, we should expect mistakes. The GAO report finds that SBA’s reliance on applicant self-certification left the PPP program ‘vulnerable to exploitation.’  Mr. Chairman, SBA chose to rely on self-certification because of the need to expeditiously provide funds to small businesses. Congress demanded speed. Would anyone have preferred that SBA take months to design a mistake-free program while millions of small businesses and ten of millions of workers lost everything? I appreciate GAO reviewing the program and making recommendations on how to improve. Each of us should take seriously the recommendations. But the partisan attacks from the Democrats on this subcommittee that seem to imply that the Trump Administration should have slowed down the PPP – that is crazy.

“The GAO says HHS experienced ‘substantial challenges’ with its initial COVID-19 response. The worst pandemic in over 100 years hit our shores suddenly because China lied and covered up the danger. Yeah, I agree, HHS was faced with substantial challenges. Past Administrations and Congresses did not do an adequate job of keeping the national stockpile supplied – and then we faced China’s hoarding.

“But look at what America has accomplished since. More than 28.5 million tests for COVID-19 have been performed in the United States. Most days now we are conducting over 500,000 tests and continue to expand capacity. FEMA has procured and delivered 25.9 million swabs and 19.0 million units of media to support the Administration’s Testing Blueprint.

“As of June 17, FEMA, HHS, and the private sector combined have coordinated the delivery of, or are currently shipping, 158.4 million N95 respirators, 631.8 million surgical masks, 23.2 million face shields, 278.7 million surgical gowns/coveralls, and over 16.1 billion gloves. FEMA has shipped 14,965 deliveries of medical supplies to nursing homes to 53 states and territories.  FEMA coordinated two shipments totaling a 14-day supply of personal protective equipment to 15,400 Medicaid and Medicare-certified nursing homes. The shipments are meant to supplement existing efforts to provide equipment to nursing homes.

“We have accomplished a great amount in a short period of time. We have a long way to go. We need the efforts on therapies, vaccines, and cures to move forward at Warp Speed. Thankfully, the Trump Administration has launched Operation Warp Speed to find vaccines and therapies. Congress needs to be a partner, not an obstacle to the success of Operation Warp Speed. House Democrats plan to put a drug price control bill on the floor on Monday. CBO has said your plan would result in 10-15 fewer drugs being introduced. The Council of Economic Advisors says that number could be up to 100 or even higher.  There is never a good time to stifle innovation and investment in life-savings cures. But this seems like a truly unthinkable time to pursue policies that will slow down the development of a vaccine. I urge you to ask Speaker Pelosi to pull this bill from consideration on Monday and I yield back.”