WASHINGTON, D.C.—House Republican Whip Steve Scalise (R-La.) joined Fox News Channel’s America’s Newsroom this morning and blasted several Democrat governors for violating federal COVID-19 protocols for nursing homes that led to tragedy for tens of thousands of our nation’s seniors. Whip Scalise demanded that these governors put an end to these practices immediately and provide a public explanation for their reckless actions.

Whip Scalise also discussed how Congress must work together on bipartisan police reform legislation to ensure equal justice for all, while also recognizing the sacrifices of law enforcement officers who uphold their oath to serve and risk their lives every day to protect American citizens. 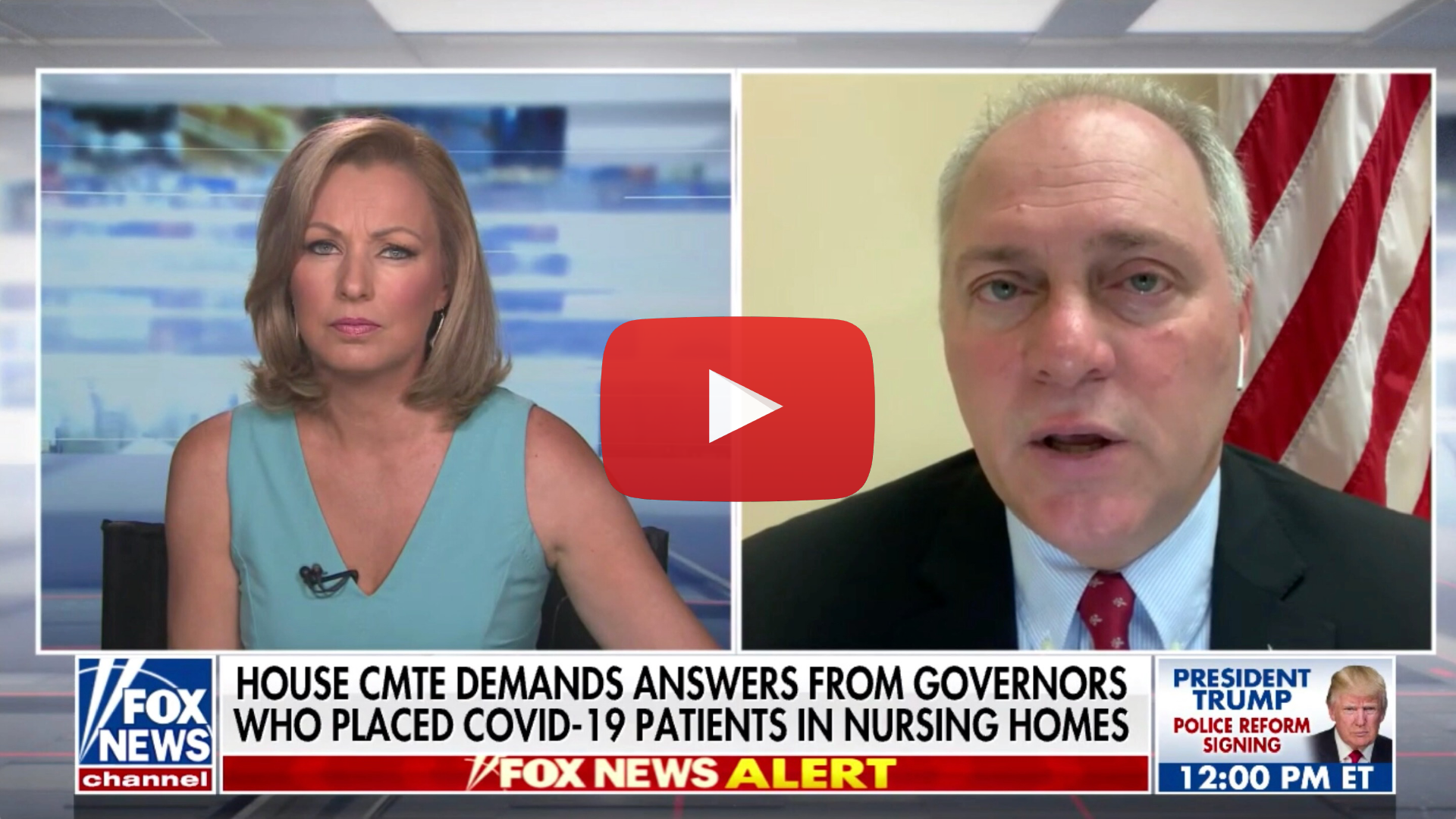 Click here or on the image above to watch the interview.
On the need for bipartisan police reform legislation:

“There have been a lot of good conversations between Members, Republican and Democrat, the House and Senate. You’re going to see the President, I think, roll out some significant reforms today on his own. Some things will still require Congressional action, but at least those things that can be done administratively, you’re already seeing President Trump go ahead and take his own action to start getting these reforms in place already. And so, that’s important, we need to keep working at this and make sure that what we do goes after bad cops, stops these bad practices that we’re seeing, but also make sure we don’t undermine the work that law enforcement officers do on a daily basis to protect communities and do things the right way to keep us safe.”

On demanding answers from governors on avoidable nursing home tragedies:

“There are some heartbreaking examples that we’ve seen in some of these states where they did not follow the federal guidelines. You know, CMS issued guidelines to every state. States run nursing homes and we saw most states followed those guidelines the right way but there were a few states where they went their own direction. In fact, they required that if somebody was COVID positive that they had to be sent back to the nursing home and expressly prohibited the nursing home from even checking to see if they were COVID positive, and in those states we saw deadly results, and I’m talking about thousands of people that died in nursing homes in those states that should have never died if the states would have followed the guidelines. Meaning, if you’ve got somebody COVID positive, you don’t send them back to a nursing home if the nursing home can’t properly isolate and take care of them. And yet, that’s the mandate that these governors gave in violation of federal guidelines.

“I’ve asked that we bring those governors in and ask them to explain why they violated the guidelines and gave these mandates that ended up killing thousands of seniors in each of their states. We’re talking about tens of thousands of seniors who should not have died. Over 40% of COVID deaths in America came from nursing homes and nursing homes only represent about 0.6% of the American population. So clearly, there was a major problem. It’s a major scandal. We’ve got to get to the bottom of it. Some of these governors, by the way, are still doing it. In Michigan, they’re still doing this. They should end that practice today, and so, that’s important that we get this out there. Some of the states hid the data from us and we’re trying to get that data out there for the public to see.”

On Democrat governors ignoring federal COVID-19 protocols for nursing homes that led to tragedy for tens of thousands of our nation’s seniors:

“In the hearing we had on this last week, I showed the CMS guidelines. They were very clear. In fact, CMS gave 14 different sets of guidelines to help ensure that seniors would be protected in nursing homes, and New York violated those protocols, they went a different direction. They haven’t explained why they did, but the protocols are out there. Most states followed them. Again, you know, this isn’t some, you know, some case of trying to figure it out on your own. The federal guidelines were clear, but about 40 states followed them properly and a few states did their own thing. New York and New Jersey’s orders were almost cut and paste identical, so clearly some of these governors were collaborating and said, ‘We don’t need to listen to the Feds, we’ll do our own thing,’ and thousands of seniors died in each of those states. Those governors ought to explain themselves, not hide behind some bubble, but come out at a public hearing like this. Show us the rest of the data that they’re hiding from the public about the real transparent issues on what happened in these nursing homes.”