TOPLINE: This week, the House is expected to consider the nearly $2 trillion package of progressive priorities Democrats have rushed to bring to the House Floor. Despite preaching for unity and bipartisanship, President Biden and House Democrats abandoned every opportunity to work with Republicans on commonsense COVID-relief and decided to ram a partisan budget reconciliation through Congress. On Monday, the Budget Committee compiled the reconciliation package, which consists of the text transmitted by the 9 committees last week. 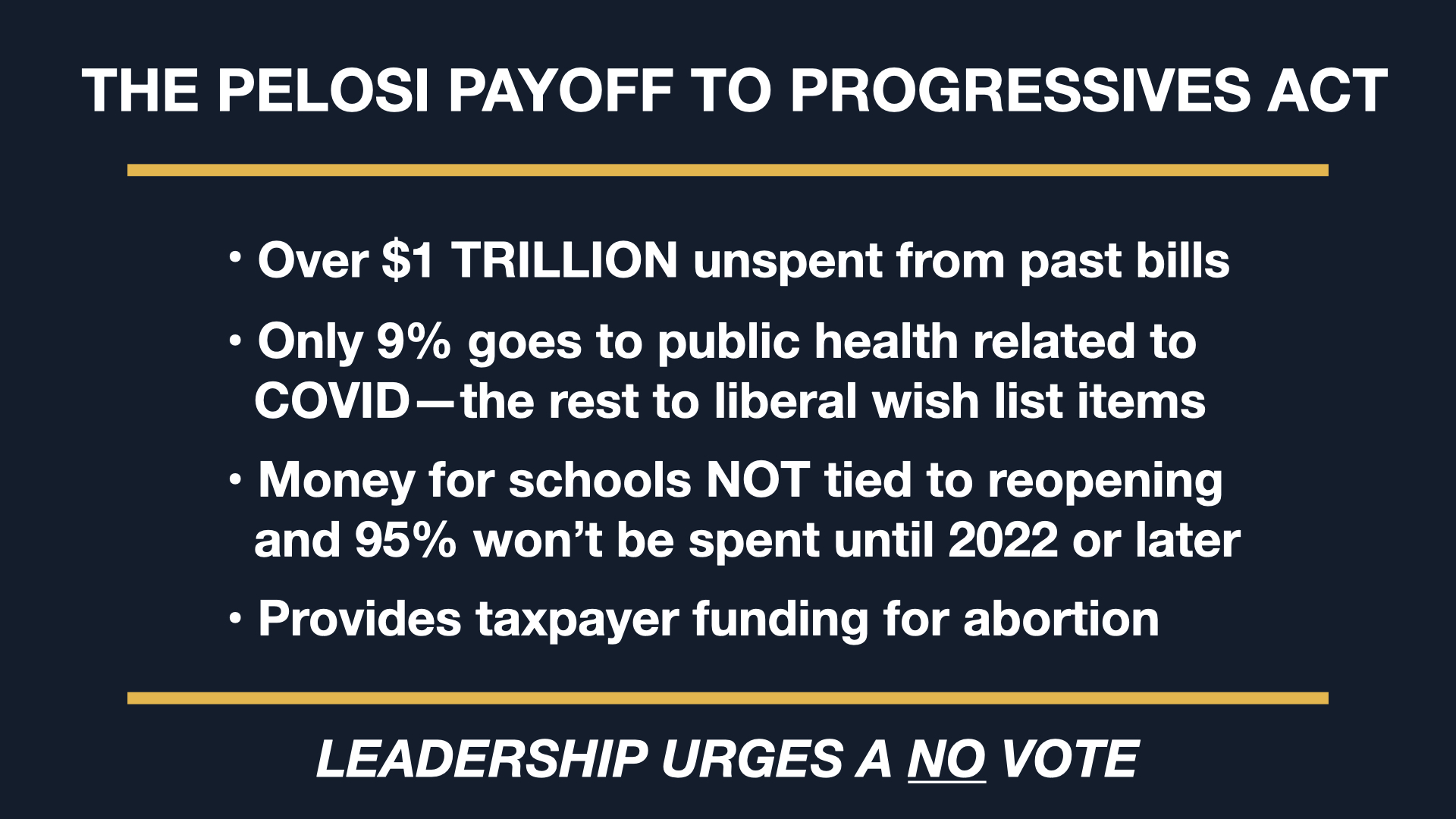 Democrats’ reconciliation package will only keep schools closed, bailout blue states, pay people not to work, and raise the minimum wage to $15/hour. Republicans insist that we must safely reopen schools, reopen the economy, speed up vaccine distribution, and effectively spend unobligated funding that remains. However, Democrats rejected hundreds of Republican amendments and any efforts to advance bipartisan solutions that are targeted, temporary, and tied to COVID relief.

It is clear Democrats have no interest in approaching COVID relief in a timely and targeted fashion and are instead using the reconciliation process to jam through their liberal wish list agenda. By advancing the minimum wage increase, Democrats are positioning to break the Byrd Rule and effectively end the filibuster to force major liberal policies through using reconciliation.

Last year, Republicans and Democrats worked together to enact four bipartisan COVID relief packages to help America address the health and economic crisis we face from the pandemic. Democrats’ latest scheme abandons that precedent in favor of a slate of liberal wish-list items unrelated to the ongoing pandemic.

Speaker Pelosi and President Biden are forging ahead with their incredibly expensive partisan relief plan while over $1 trillion in funds from previously-enacted laws remain unspent to fight COVID and reopen our economy.

The Congressional Budget Office (CBO) recently released a report concluding that, even without any new stimulus spending, the GDP would return to pre-pandemic levels by mid-2021.

The reality is less than 9% of their bill goes to public health and combatting COVID-19. Much of the funding in Democrats’ partisan spending bill is appropriated for as long as 10 years for progressive programs that would extend far beyond the COVID-19 emergency. In fact, $670 billion is spent in 2022 or after. 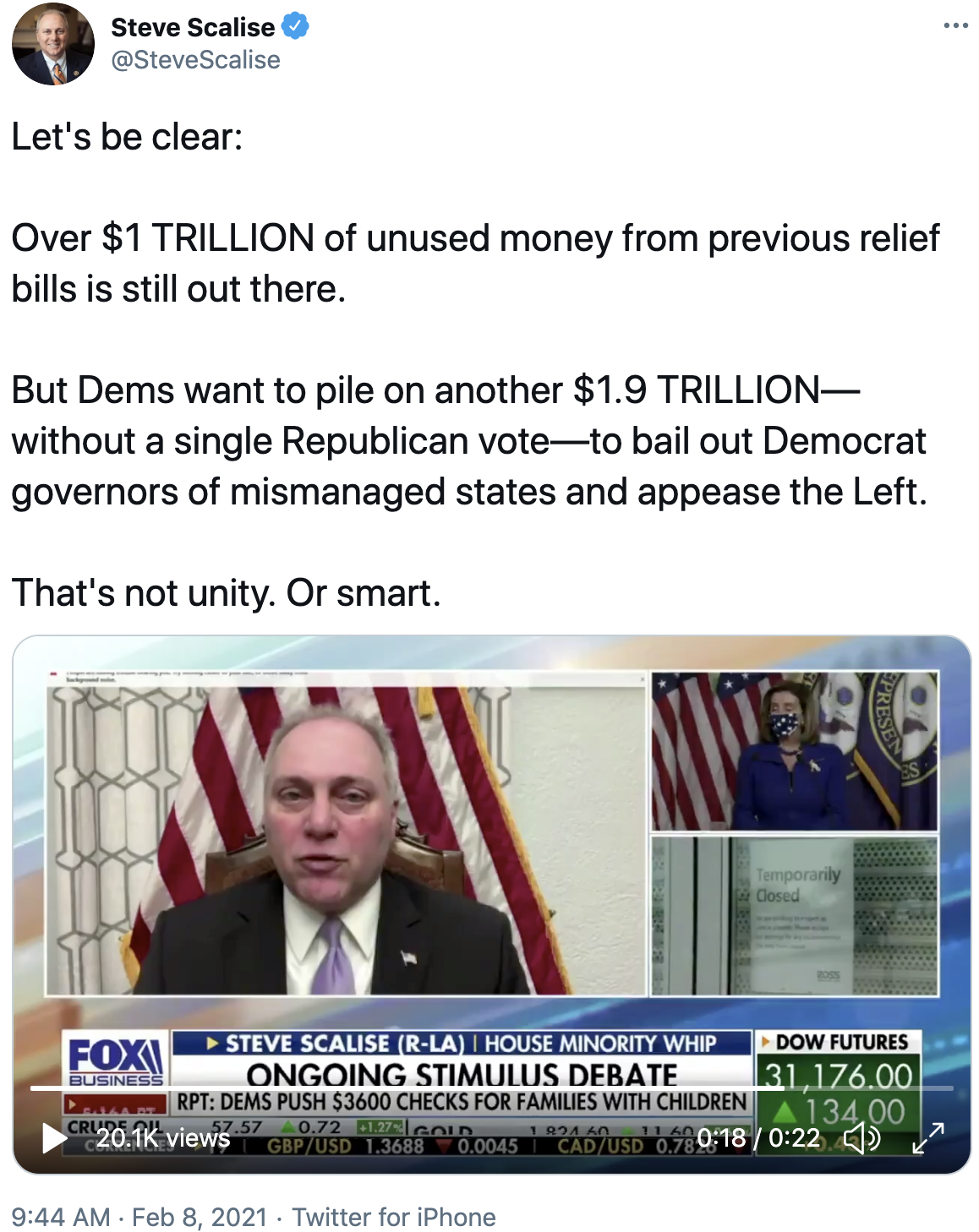 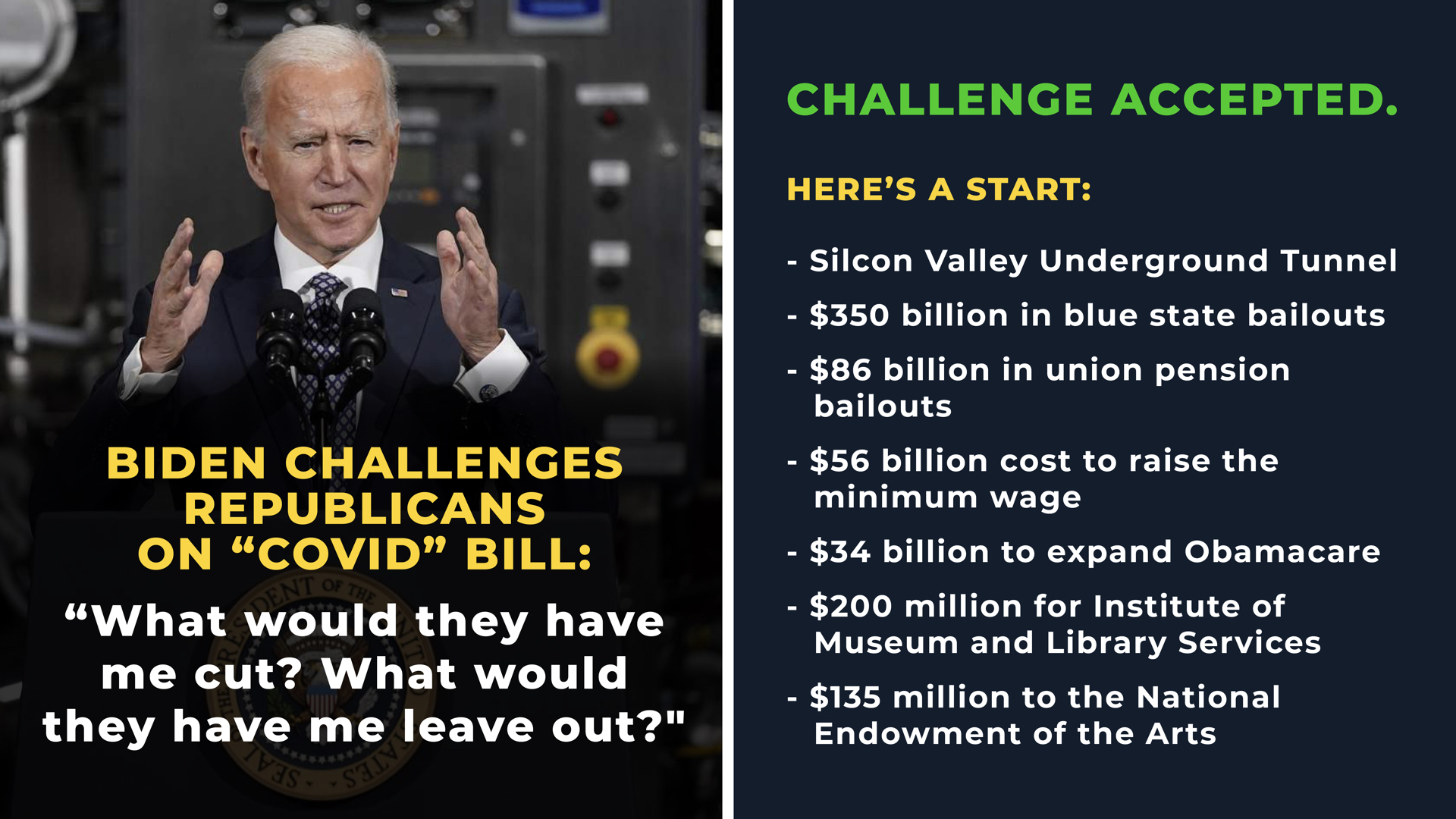 What Democrats Prioritized in Committee

Republicans offered thoughtful amendments primarily focused on reopening schools and the economy, expanding access to vaccines, targeting assistance to ensure it goes to thepeople who need it most, and safeguarding taxpayer dollars against waste, fraud, and abuse. Democrats rejected virtually every amendment on a party line vote. Instead, Democrats prioritized the following harmful provisions:

Agriculture Committee – Only 62% of agriculture and nutrition funds from previous relief packages have been spent or obligated but this bill spends an additional $16 billion and prolongs dependence on government programs.

Education & Labor Committee – This package favors left-wing special interests and fails to help all schools safely reopen or get our economy back on track. 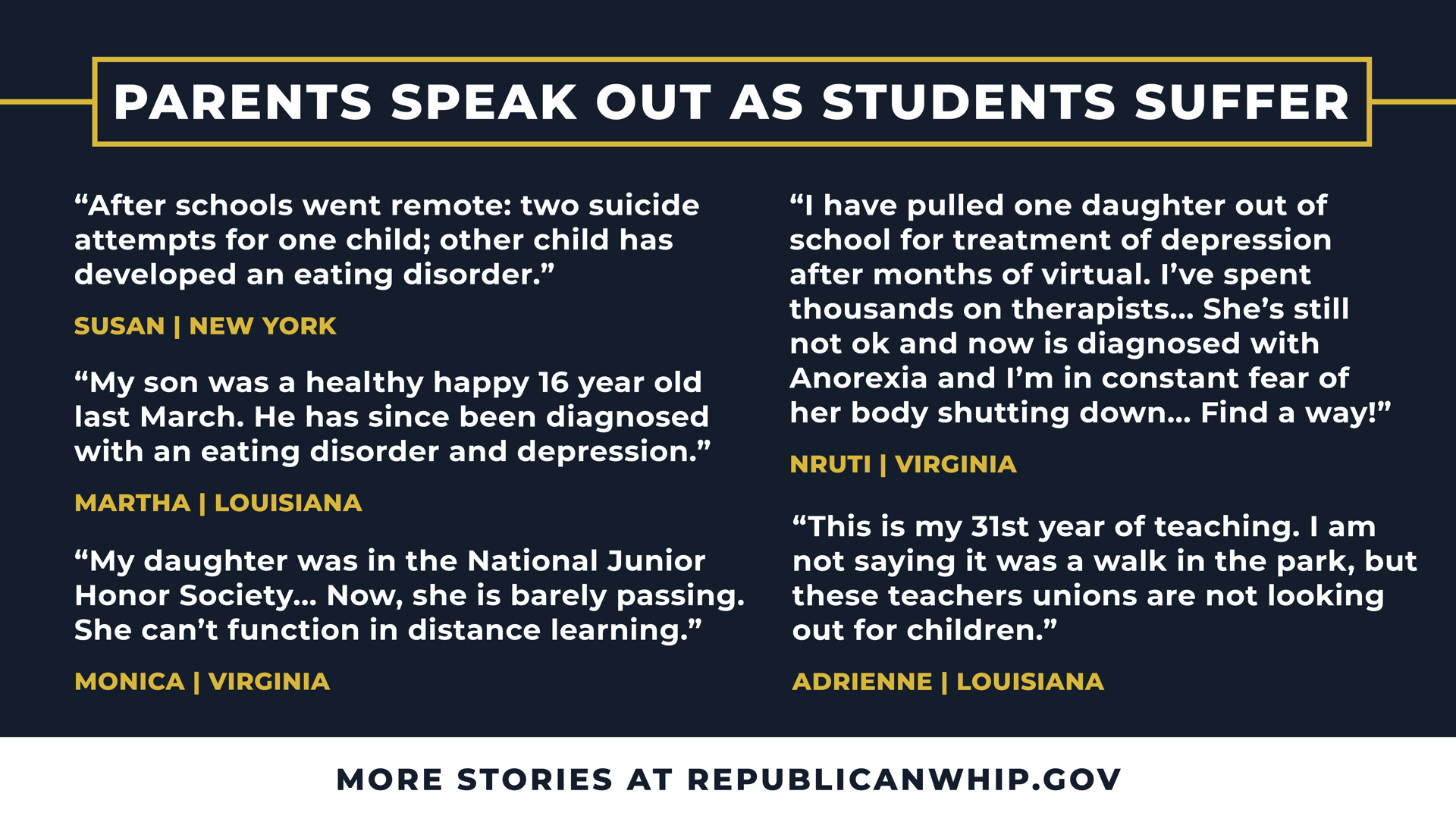 Energy & Commerce Committee – Republicans, like the CBO, do not understand how these agencies would be able to spend all of the new funds rapidly in a manner that has any meaningful near-term impact on reducing COVID-19 cases and deaths in the United States.

Financial Services Committee – Democrats are using the COVID crisis to push partisan programs and ideas that have had no demonstrable impact on the American people.

Oversight Committee – Multiple states and localities have already recovered enough that they are running budget surpluses and do not need this bill’s additional funds for COVID-19 relief.

Small Business Committee – Democrats’ COVID-19 package and administrative actions will place even greater challenges on small businesses beyond the COVID-19 pandemic: an inhospitable economic environment. Many of the policies in President Biden’s plan will destroy small businesses that have already been through an incredibly tough year.

Transportation Committee – Democrats’ package fails not only because they overspend and expand the federal government, they also fail because of unwise investments in policies that will lead to additional wasteful spending.

Veterans’ Affairs Committee – The VA has repeatedly said over the last year that theDepartment did not need additional funding.

Ways & Means Committee – This partisan package doesn’t focus on crushing the virus or rebuilding the economy.

BOTTOM LINE: With this partisan budget reconciliation maneuver, President Biden is demonstrating that he intends to govern only in Democrats’ best interests. Congress should reject this partisan spending bill and get to work on serious, bipartisan solutions for the challenges hardworking Americans are facing.