TOPLINE: With the world watching, President Biden only weakly condemns the violence against Israel and the White House is spinning Biden’s endorsement for a cease-fire as “quiet, intensive diplomacy.” America’s support of our strongest ally in the Middle East should never be “quiet.” The news from the Middle East reminds us of the grave threats that constantly surround Israel and the true dangers posed by Iran, Hamas, and the Palestinian Islamic Jihad. Sadly, many Democrats will not condemn the ceaseless attacks against the Israeli people.

The Biden Administration Has the Wrong Priorities in the Middle East

Iran is the leading state sponsor of terrorism, yet the Biden Administration has prioritized a nuclear deal with Iran instead of making a full commitment to continue our robust support for Israel and rebuke the growing chorus of anti-Israel Democrats who want to unilaterally disarm Israel.

As Iran’s proxy, Hamas is firing rockets with the clear intent to kill Israeli citizens.

In addition, General Esmail Qaani, commander of the Quds Force of the Islamic Revolutionary Guards Corps, assured Hamas of his full support. 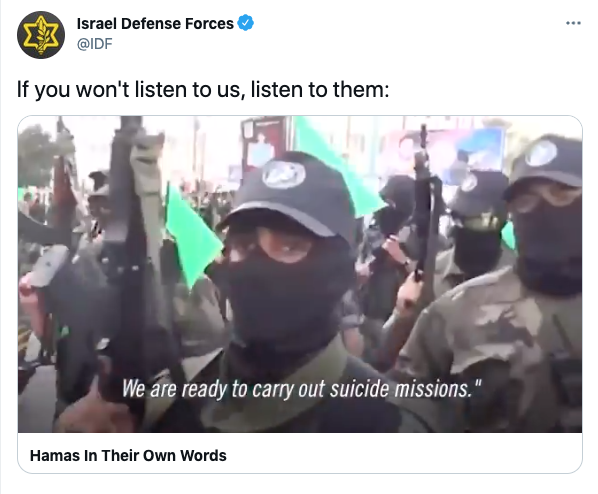 The video also features Fathi Hamad, a senior Hamas official, saying in 2019, “All of you 7 million Palestinians abroad, enough of the warming up. You have Jews everywhere! We must attack every Jew on planet Earth – we must slaughter and kill them, with Allah’s help.”

Speaking with Fox News, retired General Jack Keane argued that the Obama-Biden Administration’s nuclear deal from 2015 lifted billions of dollars of sanctions on Iran and likely allowed Iran to equip Hamas with more weapons that are now being used against Israel.

General Keane harshly criticized President Biden and said that it was “irresponsible” and “reckless” for the Biden Administration to rush another nuclear deal and lift President Trump’s sanctions against the Iranian regime while Iran’s proxies continue to attack Israel.

In an interview with CNBC, Foundation for Defense of Democracies’ Jonathan Schanzer advocated that reviving the Iran nuclear deal “could undercut efforts to end the conflict between Israel and Palestinian militants in Gaza.”

“The truth to keep in mind is that this conflict was started by Hamas and another radical outfit, Islamic Jihad. They are attempting to kill Israeli civilians with rockets supplied by Iran, or manufactured in Gaza with parts supplied by Iran. Hamas’s rocket arsenal is larger and more sophisticated than ever, and the Israel Defense Forces said that as of Sunday the Islamists had fired some 3,000 rockets into Israel. The miracle is that more Israelis haven’t died, and that’s due in large part to Israel’s Iron Dome missile-defense system…

“All of this should give the Biden Administration pause in its rush to court Iran and return to the failed 2015 nuclear agreement. That deal didn’t stop Iran’s weapons research, and it merely delayed the day it will be able to deploy a weapon. Meanwhile, it empowered Iran with more money to arm its regional proxies, including Hamas.

“President Biden and his strategists think returning to the nuclear deal will help the U.S. disengage from the Middle East. As the Hamas-Israel conflict shows, it is more likely to do the opposite.”

While Hamas is firing missiles at innocent Israelis, Congressional Democrats are repeating anti-Israel talking points by criticizing Israel’s response to Hamas’ attacks instead of condemning the attacker itself. 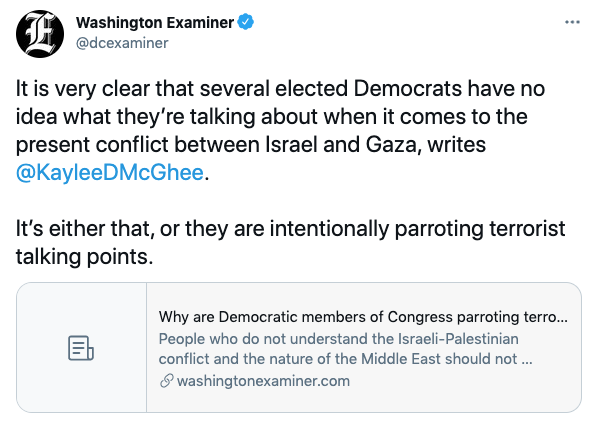 Here are some of the most egregious things Democrats have said about Israel: 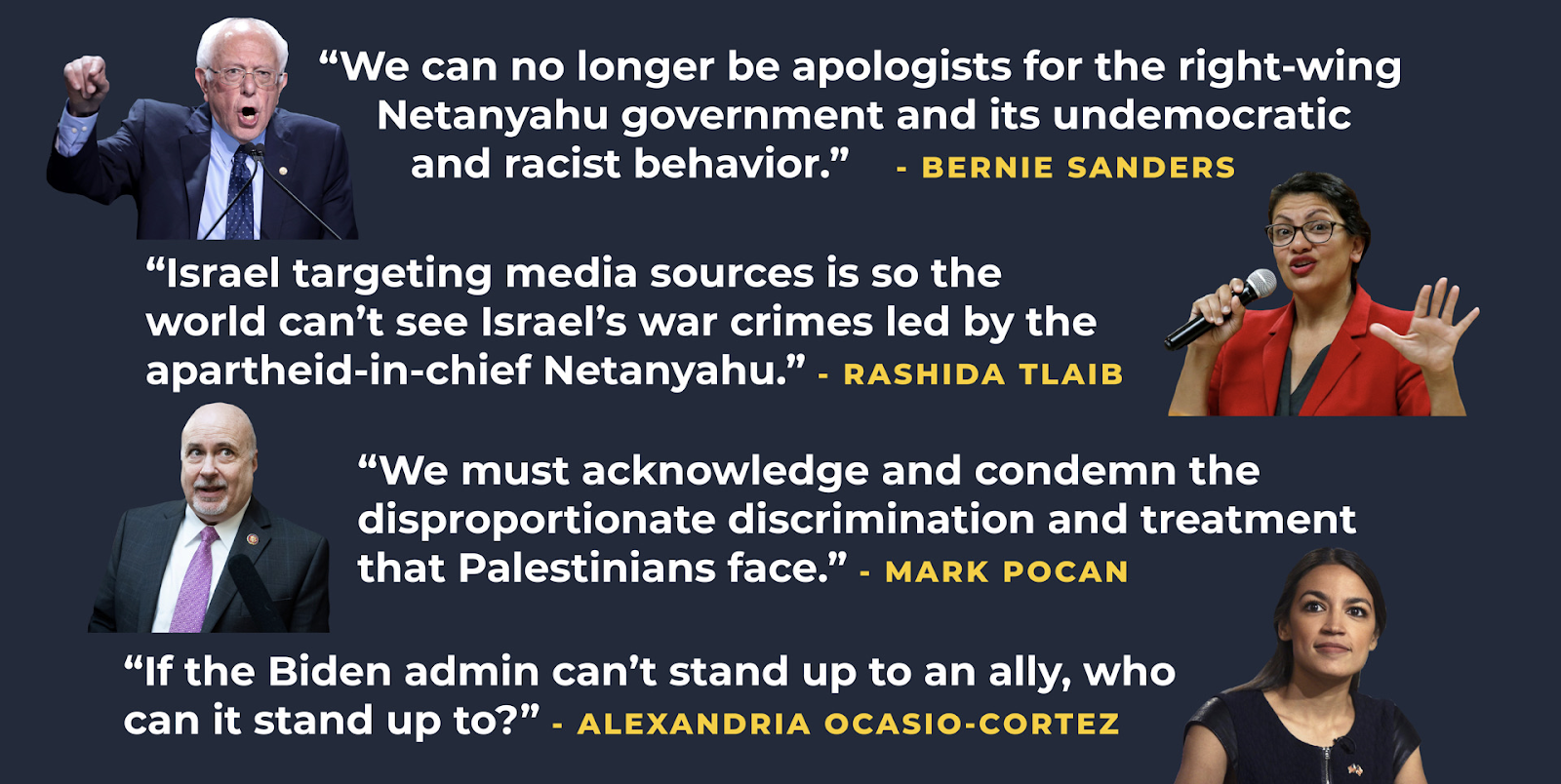 This legislation sanctions foreign governments and persons that provide support for Hamas and Palestinian Islamic Jihad, such as Iran.

Democrats Flip Flop on Israel’s Right to Defend Itself

House Democrats are falling in line behind Congresswoman Rashida Tlaib and Congresswoman Ilhan Omar who are leading the charge to stop the United States from selling missiles to Israel to help it protect its citizens. 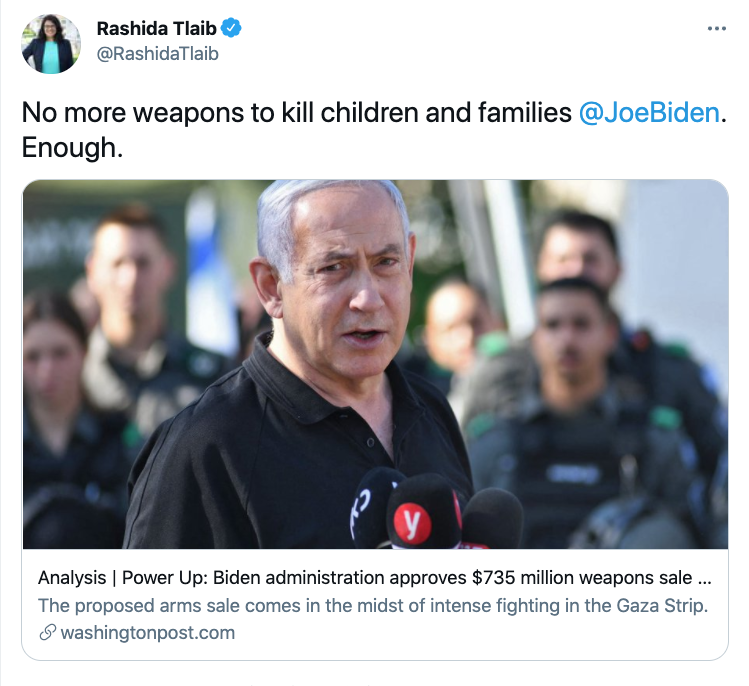 The Biden Administration notified Congress on May 5th it approved the sale to Israel. The Hill reported that the “bulk of the deal is for Boeing-made Joint Direct Attack Munitions that can turn so-called dumb bombs into precision-guided missiles.”

The approval for the arms sale came five days before the violence began in the Middle East.

Politico reported that during the meeting, “Democrats had agreed that they would send a letter to the White House seeking a postponed sale of Joint Direct Attack Munitions, hoping to pressure the Israeli government to enter into a ceasefire.”

However, on Tuesday, common sense prevailed. Chairman Meeks changed his mind and decided against requesting that President Joe Biden delay the $735 million arms sale after the White House agreed to brief lawmakers on the deal.

The fact that Democrats are attempting to stop Israel from protecting itself — in the middle of an armed conflict — is appalling.

Unfortunately, this likely won’t be the end of Democrats’ attempt to undermine our alliance and support for Israel.

BOTTOM LINE: The United States must stand with its strongest ally in the Middle East. Unlike Congressional Democrats, Republicans are committed to ensuring that the United States fully upholds its commitment to Israel and continues to support critical missile defense programs, which have saved thousands of lives from the destruction Iran, Hamas, and other terrorist groups are seeking to rain upon Israel.