WASHINGTON, D.C.—House Republican Whip Steve Scalise (R-La.) joined Fox News Channel’s America’s Newsroom to question why House Democrats acted to allow funding for foreign government programs that provide abortions, but continue to refuse to fund increased border security at a time when criminals, drugs, and trafficking are pouring over our borders. He also called on Democrat leaders to condemn Rep. Rashida Tlaib (D-Mich.) for her threatening and vulgar language towards the President and to recognize that type of language has no place in Congress. 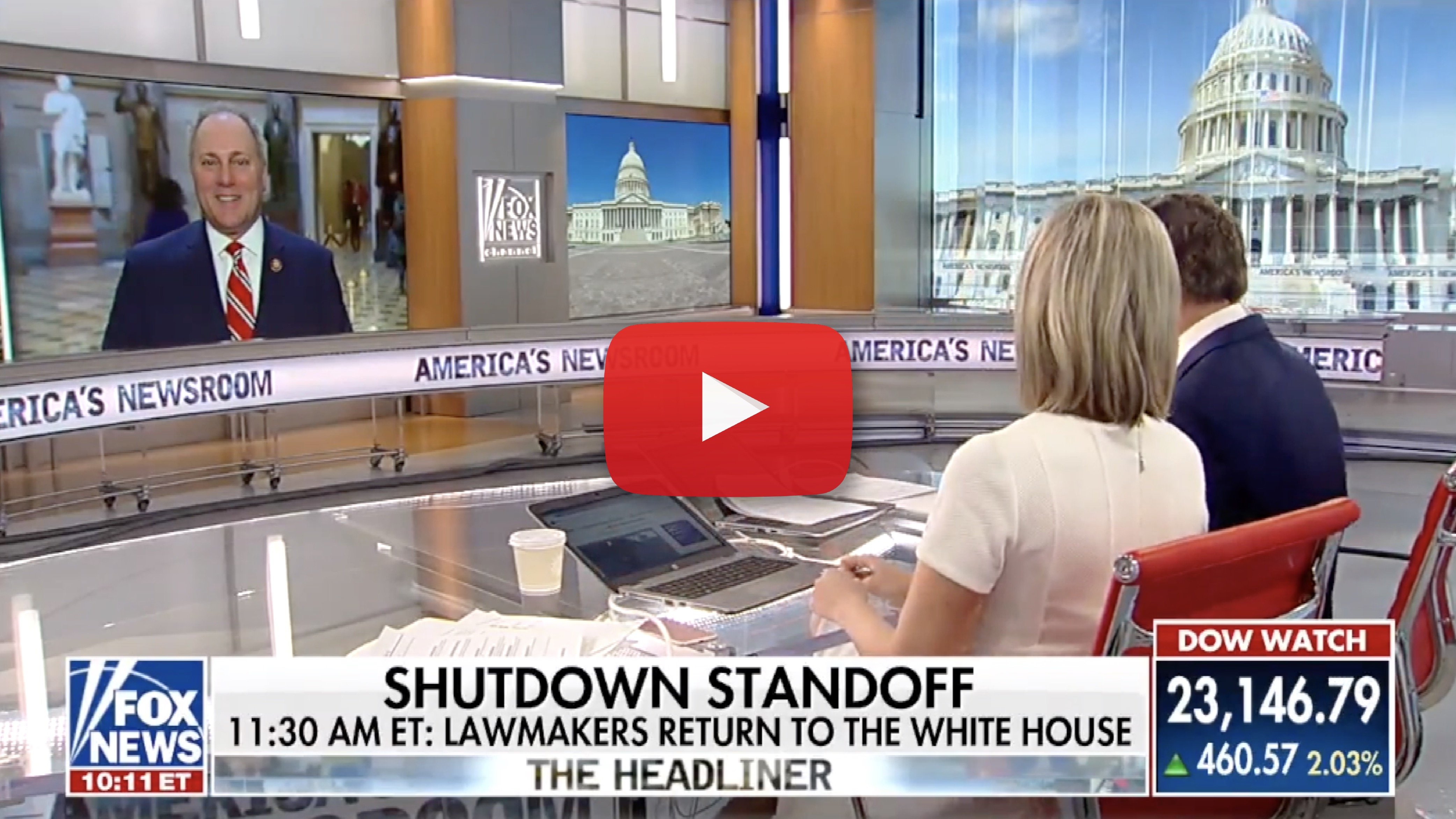 On Wednesday’s meeting at the White House:

“You saw the Secretary of Homeland Security Kirstjen Nielsen try to give a presentation to explain just how serious the problems are at the border; just how many violent criminals try to come across and in fact do come across. Some are arrested and stopped, many actually get through bringing drugs and other crimes. We saw a cop murdered last week. Every single time Secretary Nielsen tried to give that presentation and point to the facts that are happening at the border, she was interrupted by both Chuck Schumer and Nancy Pelosi multiple times. They didn’t want to hear the facts. I hope we can actually get into a serious discussion about how to solve the crisis at the border.”

On how today’s White House meeting is different:

On Democrats’ obstruction and failure to negotiate:

“President Trump brought this up last year. Let’s go back to the omnibus bill last year when President Trump said that he was going to sign the bill, but he wasn’t going to do that again. He was going to finally want to address this problem. We’ve seen a year ago by with absolutely no negotiations. Then we had the impasse and a shut down.

“Over Christmas, President Trump stayed in the White House and said, ‘Let’s negotiate.’ Not one day during that two-week period did Nancy Pelosi or Chuck Schumer try to negotiate. Now they want to say let’s go for another two weeks. At some point, we’ve got to confront this crisis at our border and why we have this crisis at the border.

“Yesterday, Nancy Pelosi passed a bill out of the House that will actually send taxpayer money to foreign governments to provide abortion, yet she won’t support money to actually go to the Department of Homeland Security to keep our border safe in America. That’s what happened on the House floor yesterday. There is a clear difference in priorities.  … Let’s get to a resolution and solve this this problem.”

On the disrespect and use of profanities by Rep. Rashida Tlaib (D-Mich.):

“There is no place for that kind of rhetoric. During Barack Obama’s tenure, there were a lot of policy disagreements, myself and many of my colleagues had with him. We never used that kind of language and frankly when people brought those kinds of words to the forefront, we called it out. They need to call it out on their side. She ought to apologize for it. That’s not the way to address her differences with President Trump. She’ll have many opportunities to do it. That is not the way to handle it. She should apologize. The Democrats on their site should call that kind of language out as well.”

On the need for Democrats to finally come to the table with a government funding solution that includes border security:

“Hopefully the Democrats have some kind of alternative. We passed a bill last congress that laid out how to keep the government open and secure the border that the President would sign. They didn’t want to negotiate off of that number. The President has acknowledged multiple times that he is willing to negotiate, but they have refused. At some point they are going to have to want to be at the table negotiating. Hopefully today we get closer.”