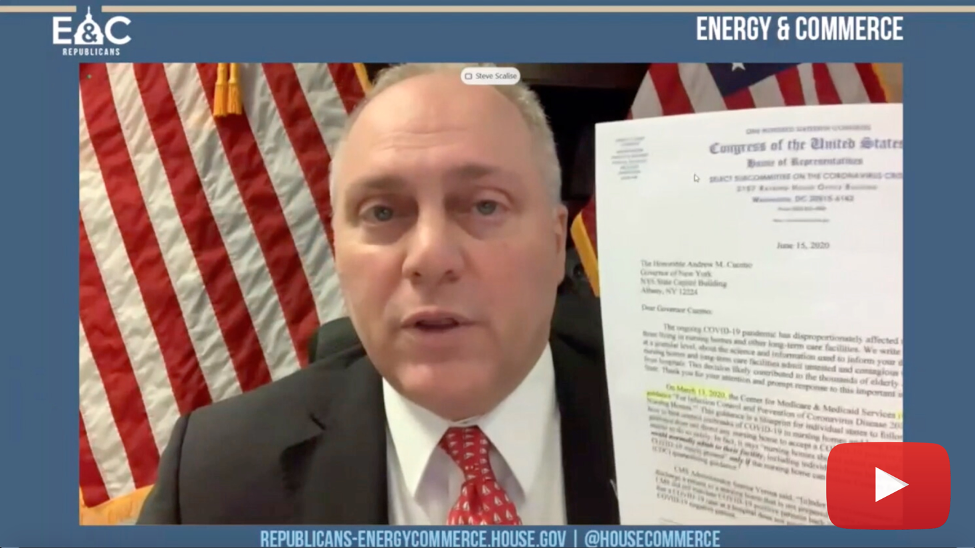 Whip Scalise released the following statement after every single Democrat on the House Energy and Commerce Committee voted against his amendment, including all New York Democrats:

“After weeks of hearing the Biden Administration call for unity and bipartisanship, House Democrats refuse to work with Congressional Republicans to deliver bipartisan COVID-19 relief. My colleagues and I have expressed grave concern about the impact COVID-19 is having on the most vulnerable populations, particularly those in nursing homes. The decision of several governors to ignore federal protocols and instead mandate COVID positive patients be forced back to their nursing homes ended up being a death sentence for tens of thousands of our nation’s most vulnerable citizens.

“I’m even more horrified that it has come to light that the Cuomo administration not only defied the Centers for Medicare and Medicaid Services (CMS) guidelines and issued ‘must-admit’ orders, but they also took deliberate actions to cover up and mislead the public on the number of deaths associated with this lethal policy. Not only did the Cuomo administration admit to covering up nursing home data so federal prosecutors couldn’t find it, new records also show that more than 9,000 COVID patients were sent into New York nursing homes by Cuomo’s deadly order – that’s 40% higher than what the state has been saying.

“We owe it to those who died and their grieving families to hold these states accountable for their fraudulent actions. States that undercut and underreport COVID nursing home deaths, should and will be penalized under my amendment. Unfortunately, there is no indication that House Democrats are willing to work across the aisle on bipartisan solutions like my amendment.”