Whip Scalise highlighted the stark contrast between Democrats’ personal and political vendetta against President Trump in their pursuit of impeachment and the impressive results President Trump has accomplished for our country. Despite attacks from the far-left, President Trump continues to deliver the strongest economy we’ve seen in years and Democrats are desperate to change the narrative. 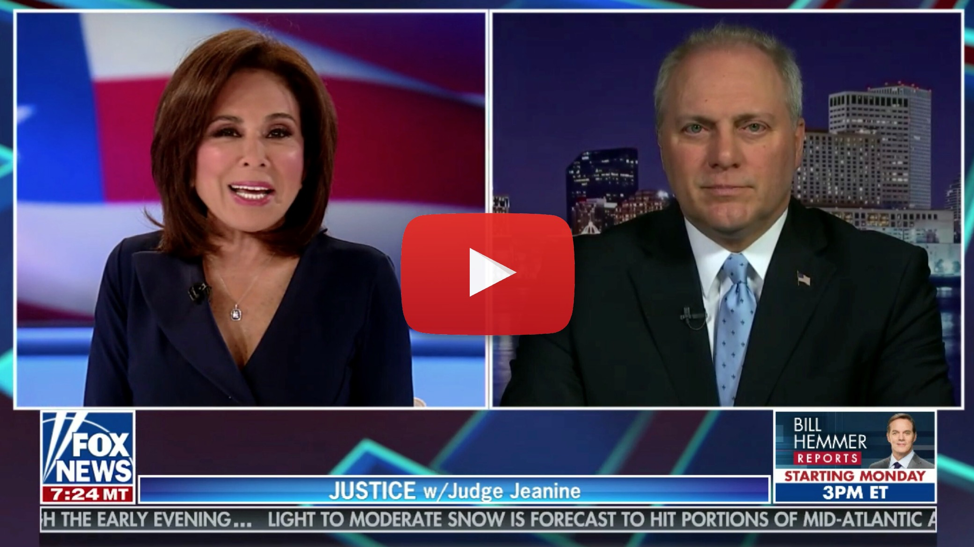 Click here or on the image above to watch the Justice with Judge Jeanine interview. 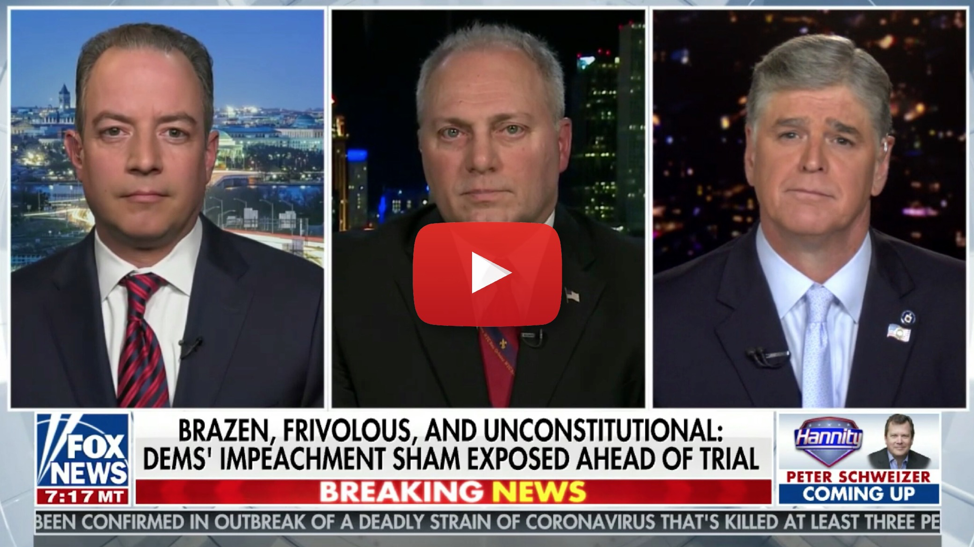 Click here or on the image above to watch the Hannity interview.

On the faux urgency of Democrats’ impeachment scheme:

“How embarrassing was it to see, you know, as Pelosi said for weeks you know, ‘We’ve got to hurry this thing, and the whole Western civilization is at stake if we don’t remove this President,’ and then she sits through the entire holidays on the papers trying to play games, trying to act like she’s a Senator. [She] totally gets the Heisman, so to speak, from Mitch McConnell where ultimately, he says you’re irrelevant to this process. And then they have this juvenile ceremony where they’re handing out these pens as if it’s some kind of trophy ceremony. I mean the whole thing has been a sham, it’s been a witch hunt, and I think it shows. It’s very personal, it’s only about trying to hurt this President from winning again because they’re not happy with the 2016 election, and they have no case. There was no crime, that was clear through our trial when every one of their star witnesses asked under oath, ‘Can you name an impeachable offense?’ ‘No.’ ‘Was there any bribery?’ ‘No.’ That was their witnesses, by the way, Judge.”

On Democrats wasting time on their impeachment charade instead of actually working for our country:

“I tell you, you’ve seen it even in the polling where people, swing voters are furious with this and they’re asking – especially all of those Democrats that ran two years ago saying they were going to be different, they were going to work with everybody, work across the aisle, vote against Pelosi – and every one of them is a puppet for Pelosi. And they’re being asked in their swing districts, ‘What have you been doing and why haven’t you been focusing on things that matter to me, like lowering prescription drugs, like working with the other party to build infrastructure, secure the border?’ None of those things are happening because of this obsession that Pelosi’s had with impeachment. It actually cost them a Democrat when Jeff Van Drew switched parties to Republican because he had enough with this impeachment. And, by the way, his reaction when he went back home was incredibly positive – people thanking him for working, basically working for them, trying to work with this President to get things done.”

“[Swing district Democrats] are the ones that Pelosi really made walk the plank, because a lot of those Democrats didn’t want to do impeachment at all. It was really the AOC, kind of far-left wing of the Democrat party. In fact, it was AOC’s very tweet the weekend before Pelosi came out for impeachment where AOC, in essence, threatened the Democrats in the majority saying, ‘Why aren’t they impeaching the President?’ And then lo and behold, days later, Pelosi says let’s impeach the President. So, I think we know, you know, whose wagon the train over here. So anyway, the bottom line is they are, those swing district Democrats really don’t have anything to go back home and say they’ve done except harass and try to impeach a President. They’re not going to remove him from office and ultimately the voters are going to decide the President this November. I think people are fed up with this personal politics attack style that Pelosi has been using.”

On Democrats remaining the party of impeachment:

“I haven’t seen a willingness for her to move on and actually focus on real priorities of families yet because look, over the break one of the other things that she and [Jerry Nadler], and a few of the other impeachment fanatics were saying is that they want to impeach the President again. I mean it’s like they are the party of impeachment. And again, we passed a package of bills out of committee unanimously, every Democrat and every Republican, to lower drug prices. Families in America today would be paying lower drug prices if Pelosi had put that bill on the [House Floor]. It would have passed overwhelmingly, President Trump would have signed it, that’s not law today because of this obsession she has with impeachment. So, it’s costing hard-working families back home and I think you’re seeing them being fed up with this whole personal, this petty obsession that they have against the President.”

On Speaker Pelosi’s failure to make a credible case for impeachment in the House:

“[Democrats] have said they might want to impeach him again because they’ve shown it’s very personal, it’s about this President, they’re scared he’s going to get reelected. But Sean, they had their chance to make their case and they brought in witness after witness, they didn’t bring in all of our witnesses. [House Republicans] had a long list and of course people like the whistleblower, Hunter Biden, or people we wanted to bring, we were denied that. But their own star witnesses when under oath were asked, ‘Can you name a single impeachable offense? ‘Not one.’ ‘Was there any bribery?’ ‘No.’ And so now it goes over to the Senate, and all of a sudden after a rigged process in the House they’re going to want to call for a fair trial and call for more witnesses because they didn’t do their job in the House. It’s not the Senate’s job to mop up the mess of the House with this. It was a witch hunt clearly from the beginning, but they didn’t make the case because there was no crime. Every other impeachment started with a crime. The President didn’t commit the crime. The President didn’t commit the crime. Again, Ukraine got the money and there was no investigation.”

On Speaker Pelosi using Congress to try to stop President Trump from winning in 2020:

“So getting to what you said earlier in your monologue, how can you impeach somebody for an accusation that never actually happened? But that’s where we are. Not because the President did anything wrong, but because they told their base that they would do this because they hate the guy, and they’re scared to death that he’s going to get elected in 2020, and their field is so weak. We’ve got a great economy because of what the President’s done. Their field is so weak, that’s why they’re doing this. The Senate shouldn’t mop up the mess of the House.”

“There was no crime and they know it. Even, look at their latest star witness, it’s a guy who’s actually under federal indictment for making false statements, that’s what they’ve got. Everybody knows this is a personal vendetta. We’ve got an election in November, the people are going to decide this, and Pelosi is really losing back home in all these swing districts on what she’s trying to do.”