WASHINGTON, D.C.—House Republican Whip Steve Scalise (R-La.) joined Fox News Channel’s Mornings with Maria to discuss the ongoing government shutdown and Nancy Pelosi’s and Chuck Schumer’s complete refusal to negotiate. Whip Scalise highlighted the willingness of President Trump to negotiate with Democrat leaders, and their continued rejection of all efforts. Democrats would rather put America at risk with open borders than work with President Trump. 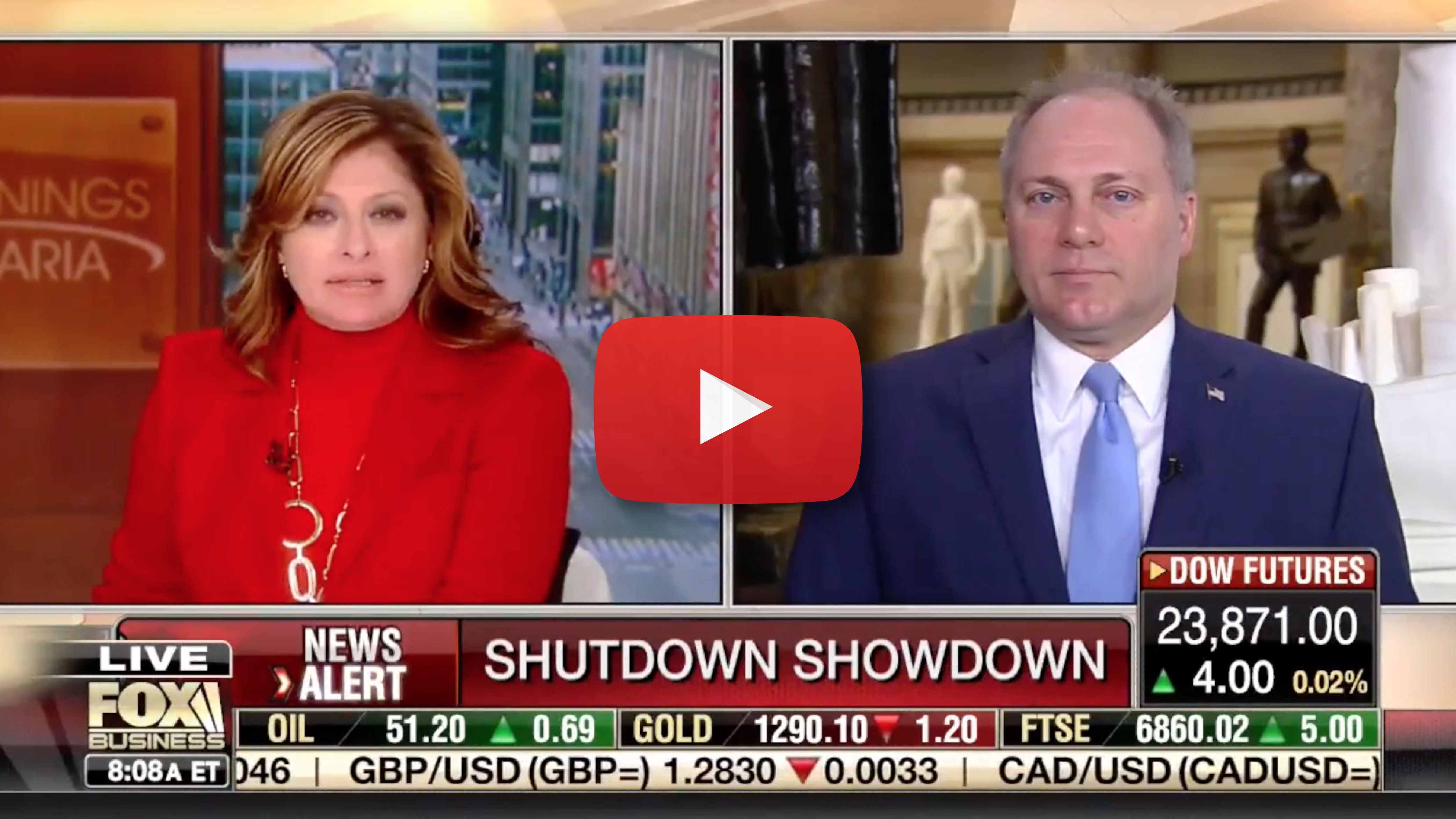 On what it will take to end the government shutdown:

“It is going to take Nancy Pelosi and Chuck Schumer finally coming to the table with some kind of counteroffer. President Trump from the beginning said his experts—the people that risk their lives to keep our country safe—said it is going to cost $5.7 billion to secure the border. Nancy Pelosi’s only counteroffer was a few weeks ago when she joked she would give a dollar. That is not serious. They have yet to put a single counteroffer on the table to negotiate.

“The President has been open to negotiating, but ultimately to securing the border. That’s what this is about. They love to say they are for securing the border until it comes time to put a dollar amount to it. It’s going to cost a lot more than a dollar to secure America’s border. Our experts say $5.7 billion. When are they finally going to come to the table with a credible counter offer to solve this problem?”

“When we were in the majority in the House, we were able to work around that a few times. You saw on the Tax Cuts and Jobs Act. You were just reporting all this great economic news. There are more people that are looking to hire workers than there are workers looking for jobs. We cut taxes to make that happen. Not one single Democrat voted with us, but we were in the House majority back then. We were able to get that done.

“On this front, obviously with Nancy Pelosi as Speaker now, they’ve made it personal. It is unfortunate because, as you pointed out, Nancy Pelosi has voted for [border security] and Chuck Schumer voted for that very same bill that Barack Obama voted for that would give our Homeland Security Department the tools they need to secure the border properly. They never put any real money behind it.

“President Trump is saying, ‘Let’s end the broken promises. Let’s end all this rhetoric and actually secure the border because lives are at risk. This is not just a campaign promise.’ He said that because it is literally costing us lives every single day we don’t secure America’s border.”

“It was great seeing the President yesterday in New Orleans. I got to spend a lot of time with him, as well as going back to DC… The President, for the last two years, has been willing to negotiate on a lot of fronts on immigration.

“Obviously closing the interior loopholes that are major problems, but even on DACA. He has been willing. Back a year and a half ago, Chuck Schumer even agreed for about 12 hours that he would support wall funding in exchange for an agreement on DACA. The President agreed to that. Then the left went nuts and Chuck Schumer backed away. The President has been open to this for a long time, but they’ve yet to negotiate.

On the need for Nancy Pelosi and Chuck Schumer to bring a credible counteroffer to the table:

“They don’t want to solve this problem. They talk about these federal workers. We don’t want people to go without pay, but we don’t want our border to be unsecure and to not be able to protect this country against caravans like the one from Honduras, like the other caravan. It’s a crisis every day with the drugs coming over, with murderers coming over. We’ve got to end it. We can end it. The President has a credible offer on the table backed up by the people who risk their lives to keep our country safe. It’s time for Schumer and Pelosi to do the same.”