TOPLINE: It’s time for Democrats – from President Biden to Speaker Pelosi – to take responsibility for their hypocritical rhetoric and anti-police policies. How can Democrats support gutting public safety for millions of Americans who can’t afford private security while spending campaign funds on armed guards for themselves? The American people feel unsafe in their communities because criminals are taking advantage of Democrats’ embrace of the “Defund the Police” movement, letting crime govern cities and doing irreparable harm to our communities.

Democrats Have Been Hijacked by the “Defund the Police” Movement

As murders increase in cities across the country, it’s disturbing that House Democrats want to continue their efforts to defund the police.

Congresswoman Cori Bush has championed defunding the police but has spent nearly $70,000 on her private security detail.

When CBS News asked Congresswoman Bush about her private security detail, she responded:

“I’m going to make sure I have security because I know I have had attempts on my life, and I have too much work to do. There are too many people that need help right now for me to allow that. So, if I end up spending $200,000, if I spend $10 more dollars on it, you know what? I get to be here to do the work, so suck it up, and defunding the police has to happen. We need to defund the police and put that money into social safety nets.” 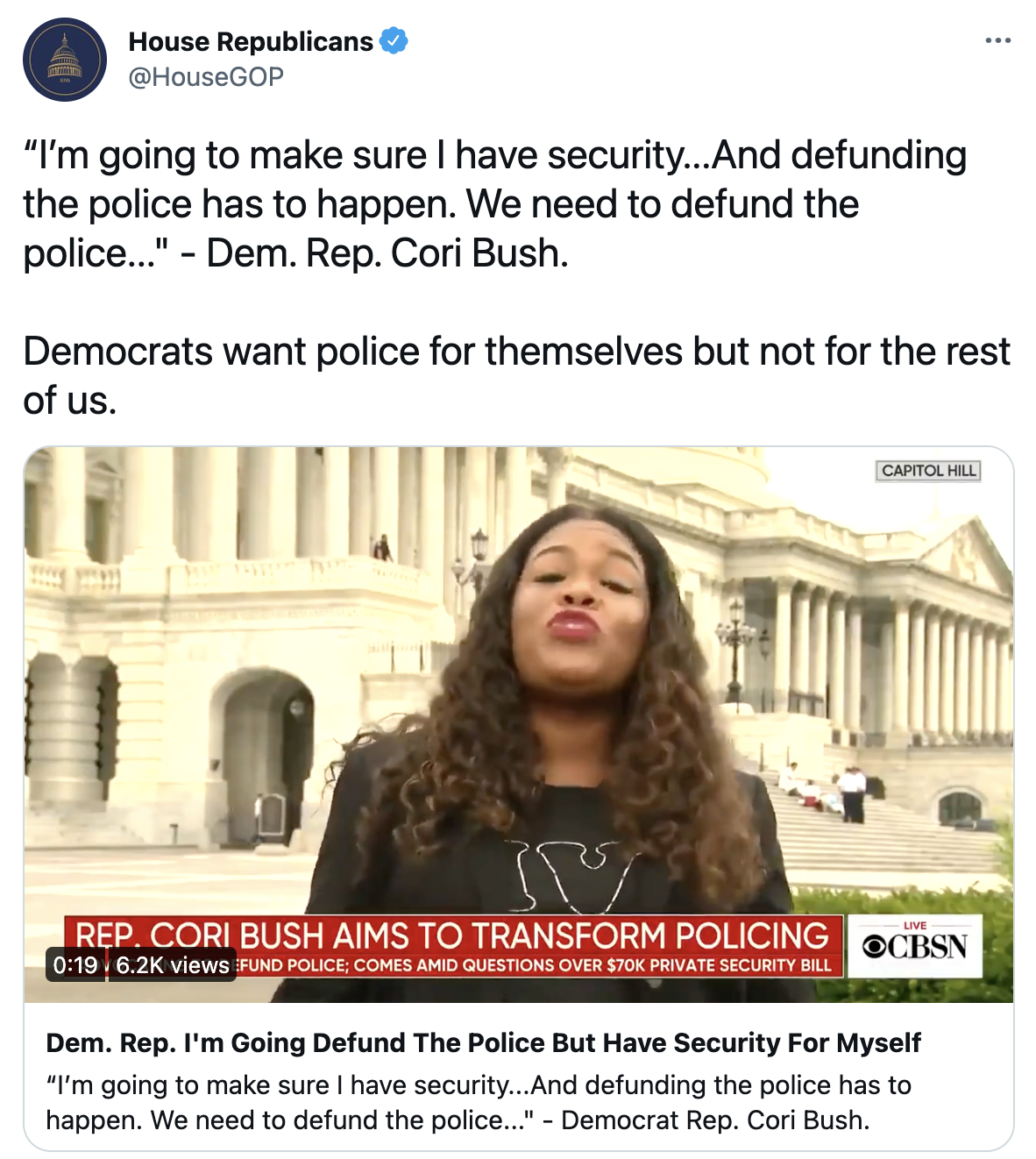 To Democrats like Congresswoman Bush, law enforcement exists only to protect Democrat politicians, not the citizens they were elected to represent.

Violent Crime is Spiking Because of Democrats’ Anti-Cop Policies

Democrats’ anti-police rhetoric and policies have made the American people less safe.

In addition, ambush-style attacks on law enforcement officers this year have increased by 91 percent compared to the same period in 2020.

Sadly, there have been over 190 officers that have died in the line of duty so far this year—those officers left behind families, loved ones, and communities in desperate need of their protection. Criminals have become emboldened by anti-police rhetoric.

After more than a year of politically driven adverse treatment and brazen targeting of law enforcement, police departments are seeing an increase in officer retirements and are struggling to recruit new officers.

In smaller cities and towns, departments are struggling to respond to Democrats’ anti-police rhetoric, making it more difficult to recruit the qualified officers they need to keep their communities safe.

The popularity of the “Defund the Police” movement has declined after Democrat-run cities have become more prone to lawlessness.

Similarly, a poll this summer found that most Portland residents reject Defund the Police, and most support an increase in police officers.

Democrats’ support for the radical “Defund the Police” movement goes against most Americans who support having more police officers to help combat the spike in violent crime.

Democrats’ far-left rhetoric, policies, and actions have jeopardized the safety of our nation’s law enforcement officers and vulnerable communities.

BOTTOM LINE: Joe Biden and Nancy Pelosi ignore how their far-left policies have led to a historic increase in crime and a talent drain in police departments struggling to recruit new officers across the country. How can Democrats advocate for slashing funding for police departments across the country but support spending tens of thousands of dollars on private security for themselves? We are less safe because of Democrats’ hypocritical anti-police agenda.