TOPLINE: There is mounting evidence that the pandemic started in a Chinese lab, and the Chinese Communist Party (CCP) covered it up. This would mean the CCP is responsible for the deaths of nearly 600,000 Americans and millions worldwide. President Biden has repeatedly failed to confront China and investigate the origins of COVID-19. Americans are demanding answers.

This week, the Wall Street Journal reported that three researchers from China’s Wuhan Institute of Virology fell ill with symptoms consistent with COVID-19 and sought hospital care in November 2019, according to U.S. intelligence sources. This revelation has prompted major concerns regarding the virus’ origins and the efforts of the U.S. intelligence community to hold the CCP accountable.

As a candidate, Biden promised he would “insist” on getting answers from China. With great conviction, candidate Biden affirmed that he would reject Chinese credibility and seek a substantive scientific investigation. 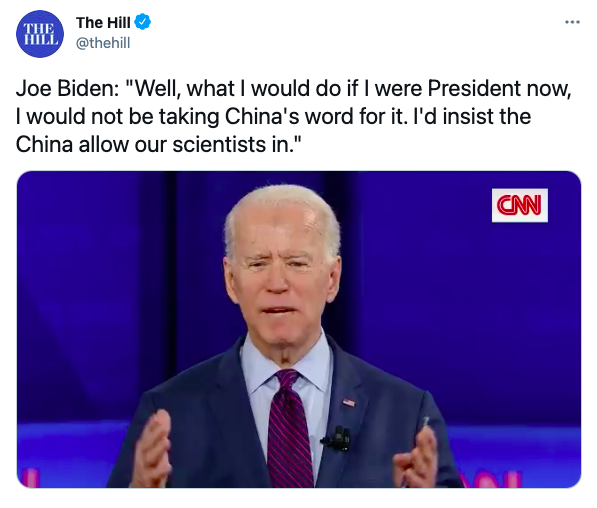 At no surprise to the American people, President Biden hasfailed to deliver on this promise and contributed to an already recurring theme of the current administration: distrust.

The inaction of the Biden Administration on investigating COVID-19 origins continues to speak volumes of the President’s disregard for an honest pursuit of the truth.

The State Department announced that it would be ending an inquiry into the origins of the COVID-19 pandemic, which would have investigated whether the virus originated from a leak at the Wuhan Institute of Virology.

The inquiry, initiated at the insistence of then-Secretary Mike Pompeo of the Trump Administration, was rooted in reasonable evidence that came from security briefings in February and March of 2020. President Biden has opted to centralize investigation efforts in the National Security Council, which comes within close reach of his purview.

It has also become abundantly clear that the United States cannot rely upon the World Health Organization (WHO) for a thorough investigation due to the CCP’s ability to influence the agency’s review process over the past year. China’s credibility has completely diminished since the pandemic’s discovery.

President Trump’s response to the pandemic was based on swift and precise action, beginning with the initiation of Chinese travel restrictions, continuing with agency-led investigations, and culminating in unprecedented vaccine development and rollout.

President Biden only asked U.S. intelligence agencies to redouble their investigative efforts and report within 90 days on COVID-19’s likely origins after facing intense criticism for shutting down his State Department’s investigation.

House Republicans remain steadfast in acting swiftly and precisely on behalf of the American people who deserve answers to questions relating to Chinese ties to the origins of COVID-19.

Speaker Pelosi Refuses to Investigate the Origins of COVID-19

Despite being 18 months removed from the pandemic’s origins in Wuhan, House Democrats and Speaker Pelosi have yet to initiate an official Congressional investigation into the origin of COVID-19.

In an interview with CNN last year, Speaker Pelosi referred to President Trump’s displeasure with the WHO and lack of Chinese transparency as “senseless.” She later doubled down on her statements on the President’s desire to focus on COVID-19’s Chinese origins by describing them as an “interesting diversion.” 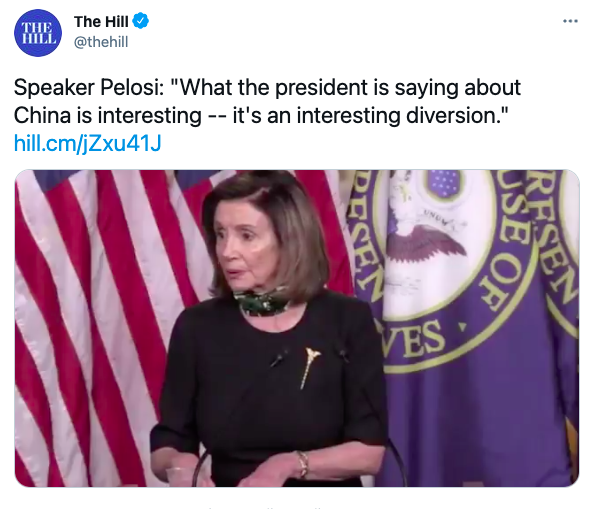 Today, over 200 members of the Republicans Conference called on Speaker Pelosi to direct her committee chairs to join House Republicans in investigating the origins of COVID-19.

It has become increasingly clear that the WHO failed to produce the final word on the origins of the COVID-19 pandemic and the CCP’s liability. That task falls to lawmakers in Congress.

Even some House Democrats have seen through Speaker Pelosi’s partisan antics. Representative Diana DeGette, Chair of the House Energy and Commerce Committee, has voiced her support for a thorough investigation into the origins of the coronavirus, including research around claims of its possible lab-based emergence.

It is a shame that Americans who have lost loved ones and are seeking answers about the pandemic’s origins are viewed in the eyes of Speaker Pelosi as initiators of a “diversion.”

BOTTOM LINE: House Democrats are taking their cues from President Biden’s weak leadership. Biden has failed to confront President Xi Jinping about the origins of COVID-19, and House Democrats have not held a single hearing on the origins of the virus. Unlike House Republicans, who have been asking for congressional investigatory resources to be devoted to this critical question, Speaker Pelosi refuses to join this battle to uncover the truth.