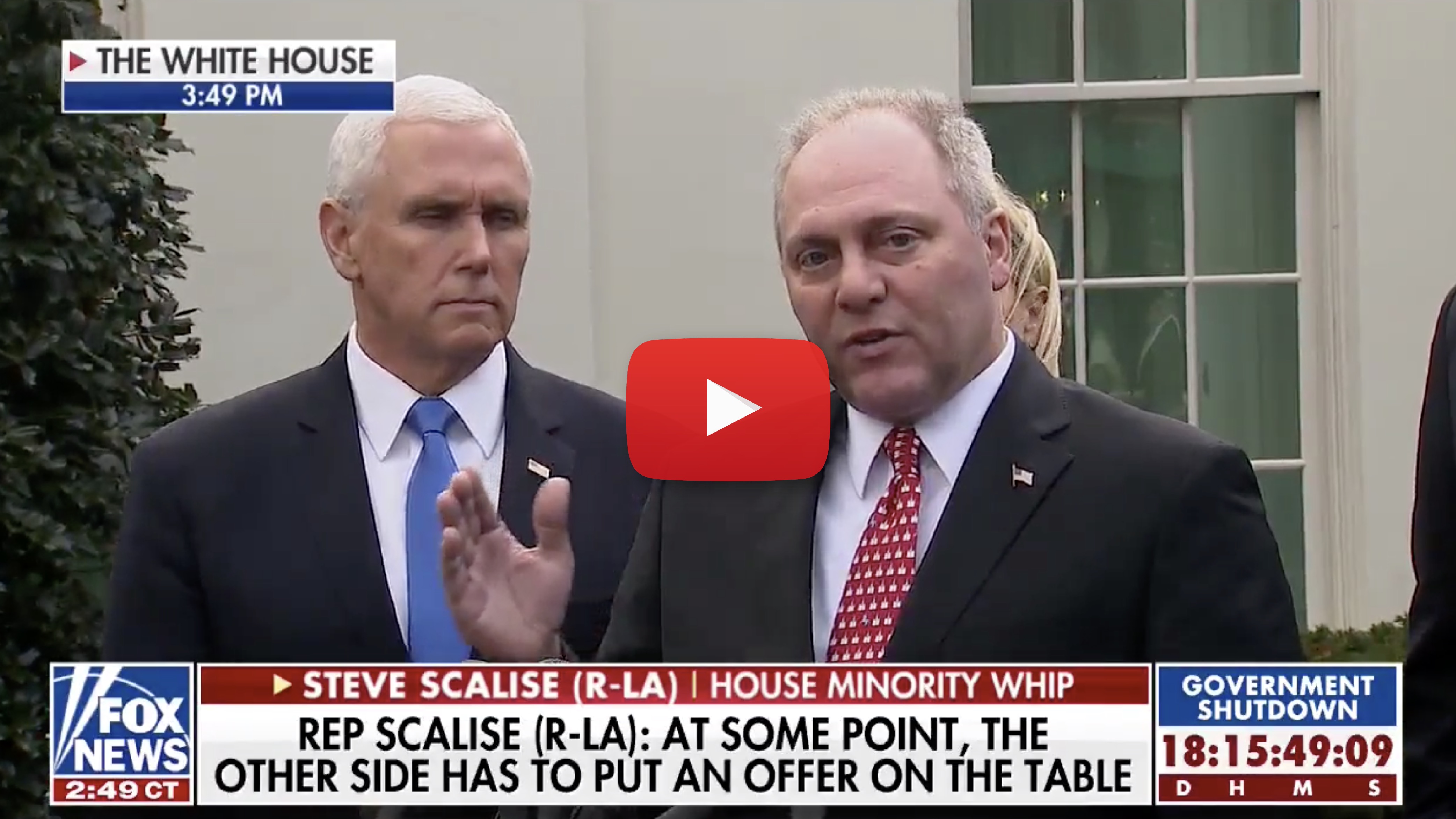 Click here or on the image above to watch the remarks.
On the many attempts to negotiate in good faith with Democrat leaders:“I thought the President was very calm in trying to continue to put different options on thetable to solve this serious crisis at our border. Last night, he laid out some of the problems and challenges that we’re facing as a country and how we can get a solution. Today, what he did is start to offer some more ideas.

“Our teams worked over the weekend. We can talk about terms all day long. At some point the other side has to put a counteroffer on the table. No is not a valid answer, if you’re serious about solving this problem.”

On Speaker Nancy Pelosi turning negotiations to reopen the government into a joke:

“The President … laid out, not why he wants $5.7 billion, but why the experts who are tasked with securing our nation have said it’s going to take $5.7 billion to secure theborder and deal with this crisis, including building a wall. Nancy Pelosi—last week her only answer was to jokingly say she’d support a dollar.

“Now, the American people who are watching this shutdown, the families who are going to be missing paychecks this week, it’s not fair to them to jokingly say you’re only willing to offer a dollar to solve this problem, when you haven’t given any serious credible counteroffer.

“The President’s laid out many different options. The President has even said he’ll change the definition of a wall to work with Democrats. He’ll move off of the number. He even sent the Vice President down weeks ago to offer a negotiation that would involve a lower number than what our national security experts have said, and not one single time have the Democrats offered a counter other than to say a dollar.”

On Speaker Pelosi’s direct refusal to offer any counteroffers whatsoever to reopen the government and solve the border crisis:

“…By the way nobody slammed their hand on a table. To mischaracterize some of thethings that happened in that meeting is not fair to this process. At the same time, when thePresident looks at Nancy Pelosi and says, ‘If I give you another 30 days, will you be willing to support some funding for a wall to secure the border?’ and she says ‘No,’ not, ‘Well, maybe a little bit more than a dollar,’ not some serious counteroffer, but flat out no, that’s not an acceptable answer to a serious crisis at our border.

“We’re seeing people dying. We’re seeing the drugs that are pouring in and the families all across this nation that are being touched in a very negative way by the drugs and theopioids. When you are going to see paychecks being missed and there’s a quick way to solve this problem. Not once have the Democrats offered a single counteroffer.

“The President has offered multiple times to negotiate in good faith and the Democrats haven’t given one counteroffer. That’s not an acceptable answer. They need to come back to the table with some kind of serious, credible alternative.”