The Department of Labor’s June Consumer Price Index shows that prices rose 5.4 percent over the last year—the fastest rate in the past 13 years. Americans are paying more for everyday goods and services.

Prices are rising faster than paychecks, and the impact disproportionately hurts families with lower incomes. 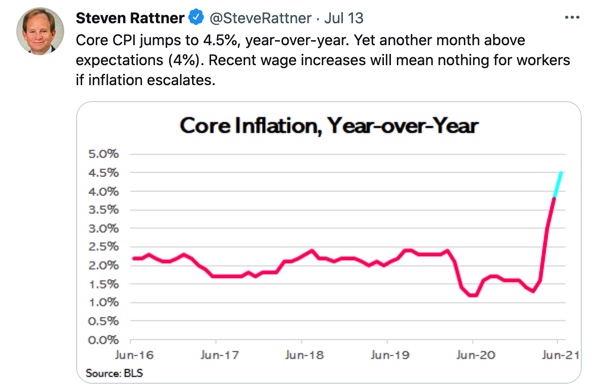 President Biden is desperately trying to change the narrative and mislead the American people by saying that his economic agenda will lower the cost of living over time. His plan isn’t to actually lower the price of anything — his plan is for taxpayers to subsidize everything. 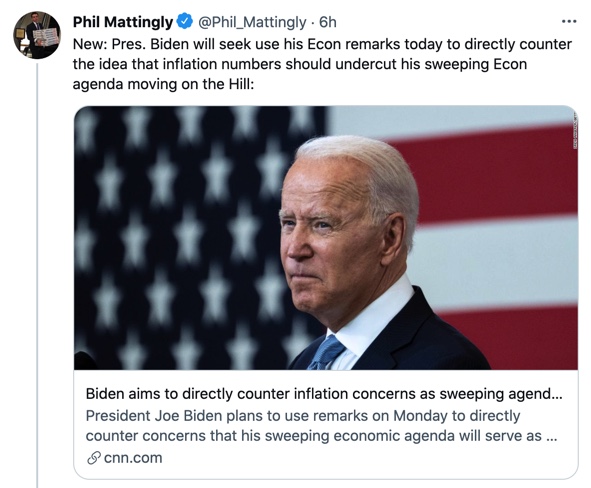 President Biden wanting to inject $3.5 trillion into the economy is bad economic policy. This will only fuel more inflation, devastate middle class families’ purchasing power, and threaten the United States’ economic recovery after the pandemic. 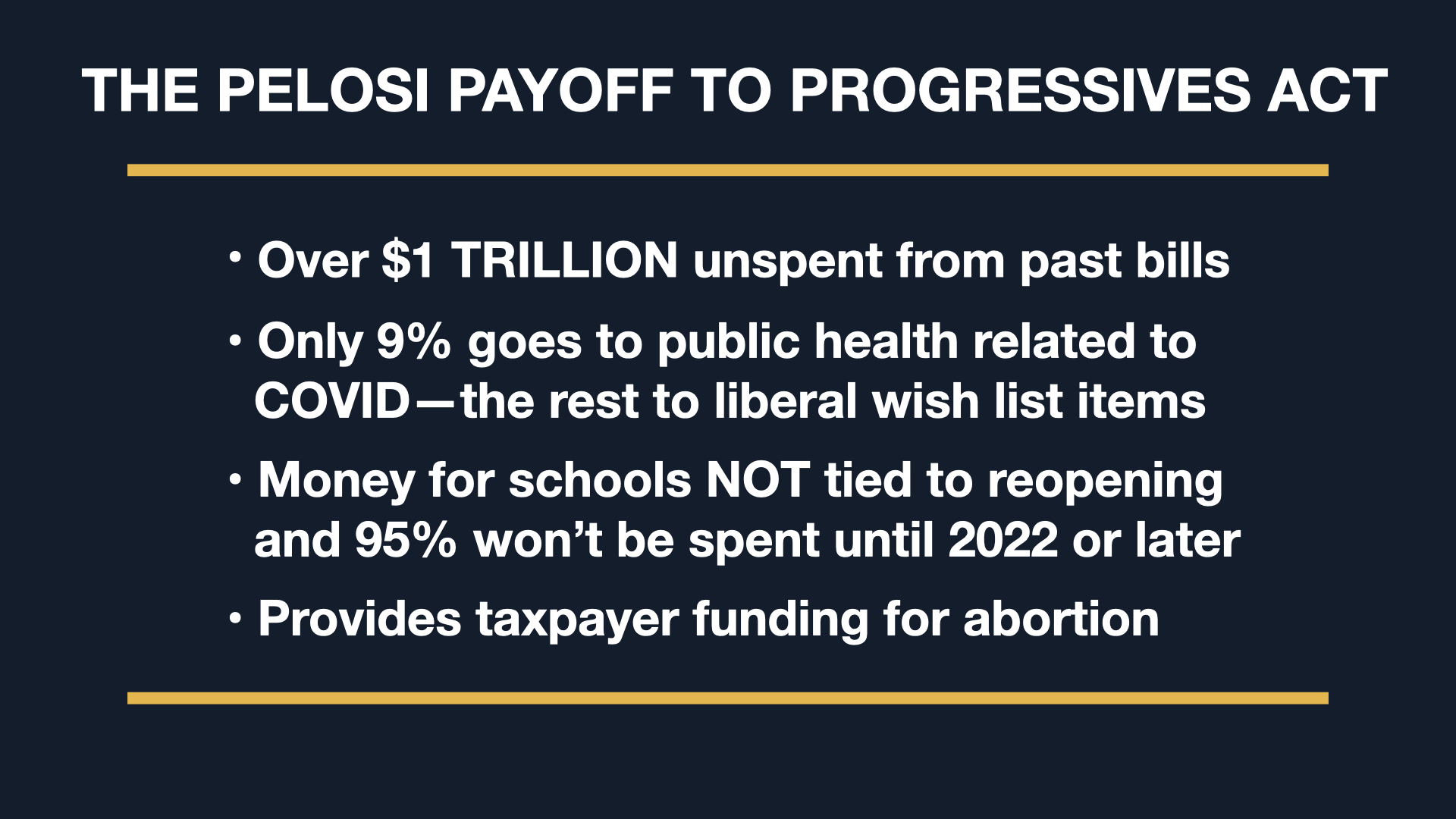 Thefederal deficit exceeded $3 trillion in 2020 and is expected to exceed $3 trillion again this year. This is three times bigger than the budget deficit in 2019.

Biden Wants to Give Mass Amnesty to Illegal Immigrants
There is a humanitarian and national security crisis at the U.S.-Mexico border, but you won’t hear it from President Joe Biden or Vice President Kamala Harris.
The Biden Administration is on track to let 1.7 million illegal immigrants into the United States this year.

Instead of taking responsibility for creating the national security and humanitarian crisis through their far-left, open-door immigration policies, the President and Vice President are working to give amnesty to “Dreamers,” those eligible for Temporary Protected Status; and “essential workers.”

This is a terrible idea.

Including amnesty in Democrats’ $3.5 trillion budget measure would encourage even more migrants to unlawfully enter the United States.

A Back Door for the Green New Deal

Democrats are fighting hard to ensure that their liberal climate mandates get included in their $3.5 trillion budget proposal.

Democrats are proposing a tax on carbon-intensive imports to help pay for their $3.5 trillion tax and spending plan.

Unlike the European Union’s carbon tax, Senate Democrats did not release details about their tax proposal, calling it a “polluter import fee.” Democrats’ framework does not explain what would be taxed at what rate or how much revenue it would expect to generate, according to the New York Times.

CNBC reports: “If passed as Democrats envision it, the bill would mark both the biggest expansion of the social safety net in decades, and one of Washington’s most sweeping efforts to curb climate change and prepare the country for its effects.”

Time and time again, Congressional Democrats have shown they would rather prioritize their radical climate agenda over the needs of American workers and families.

After meeting with President Biden and his fellow Democrats, Senator Joe Manchin said he was “very, very disturbed” by proposed climate provisions in the plan that aim to reduce the use of fossil fuels.

“If we brought in the scientific community here, and we were to ask them, ‘What do you need to deal with climate change,’ they would probably say, ‘Tens of trillions of dollars.’ Literally,” said Senator Sanders. “But what we’re doing here is by far the most significant effort that this country has ever seen.”

All Americans will feel the pain of Democrats’ massive tax hikes proposed in this bill.

Arecent analysis by the U.S. Chamber of Commerce shows that there are 1.4 million small businesses with fewer than 500 employees that will be directly impacted by the proposed tax increases.

The United States would lose nearly a million jobs, and businesses will pass tax increases on to their consumers through higher prices and on to their workers through lower wages. Study after study shows that Democrats’ tax hikes will hinder economic growth and result in less investment, less productivity, fewer jobs, and lower wages. Biden’s $3.5 trillion tax-and-spending plan will kill American jobs and hinder the U.S. economy from reaching its full potential.

In their $3.5 trillion socialist spending grab bag, Democrats will include their far-left drug plan, H.R. 3. This legislation imposes price controls on drugs for seniors by importing the price controls used in socialist countries. This anti-free market legislation comes at the expense of pharmaceutical innovation.

Under H.R. 3’s drug pricing regime, the Congressional Budget Office estimates that “approximately 8 fewer drugs would be introduced to the U.S. market over the 2020-2029 period, and about 30 fewer drugs over the subsequent decade.”

Democrats want to sign taxpayers up to spend about another $80 billion a year on Medicare by adding dental, hearing, and vision coverage to the traditional Medicare program and lower the age of eligibility for the program.

Even if Medicare wasn’t already bankrupting taxpayers and scheduled to run out of money five years from now, this would be a massive waste of money. The Medicare Advantage program already offers these benefits to seniors, and it’s paid for through efficiency gains, not additional cash from taxpayers. In addition to these extra benefits, Medicare Advantage plans cap out-of-pocket costs, so enrollees don’t have to waste money on supplemental coverage, and 90 percent of enrollees have plans that include drug coverage, with 65 percent of them getting their drug coverage for free.

This is why enrollment in Medicare Advantage has more than doubled over the last decade, now enrolling 42 percent of all seniors, and enrollee satisfaction is incredibly high.

BOTTOM LINE: President Biden and his far-left allies in Congress are attempting to ram through the biggest tax increase and spending plan in American history on a simple party-line vote. The reality is that American families, workers, and small businesses will suffer from Democrats’ shameless efforts to enact their socialist wish list.