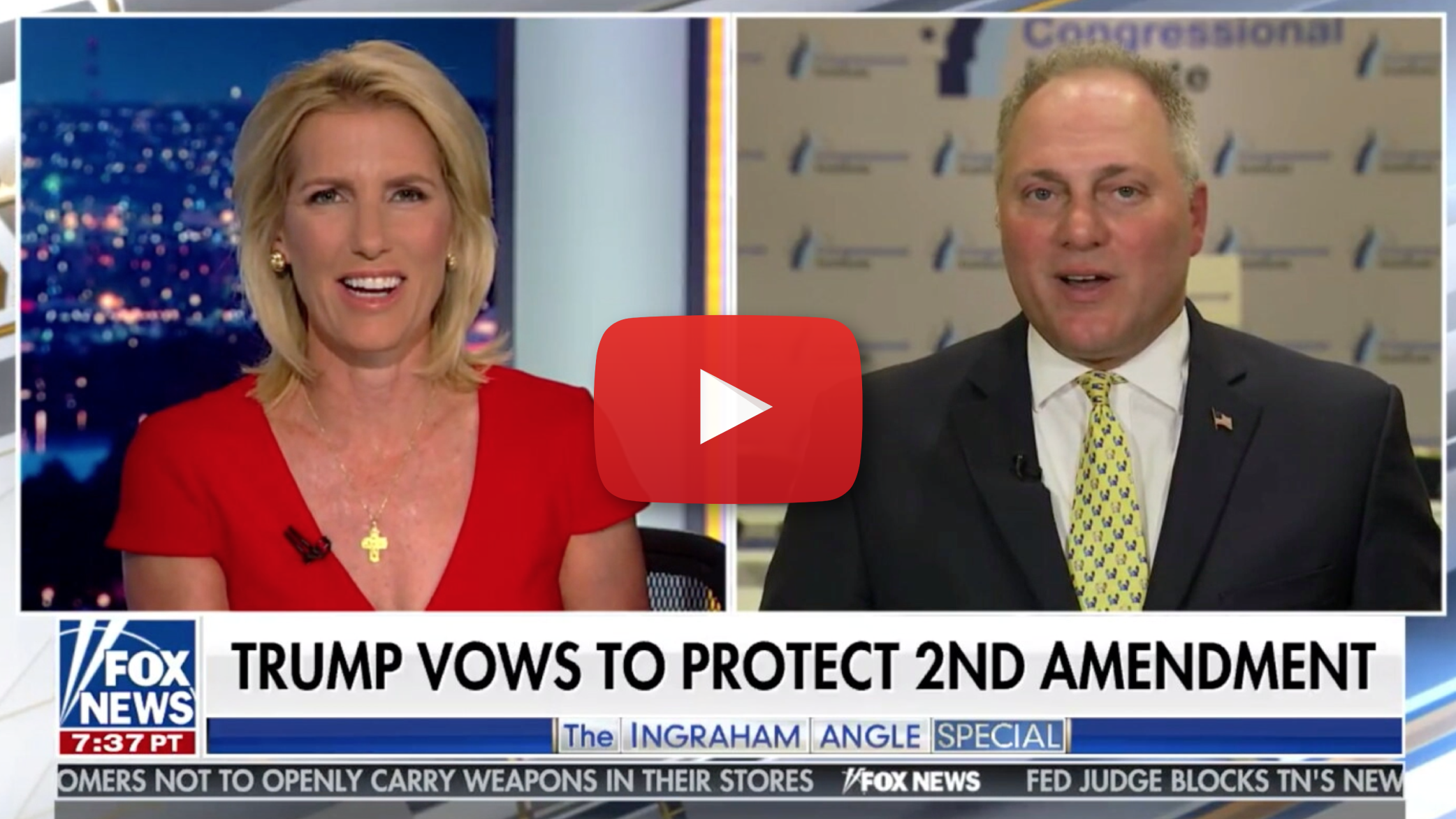 Click here or on the image above to watch the Ingraham Angle interview.
On President Trump’s address and the economy:

“Well Laura, the President I thought just had a great presentation tonight. And if you were watching the Democrat debate and then you switched the TV and watched the President — you really saw what’s going to be the framework for the debate next year, and that is what this President has done to get this economy moving again.

“The President talked a lot about how every income level is doing better, African American unemployment and Hispanic unemployment at the lowest levels in the history of our country because of what President Trump did working with the Republican Congress. And then you contrast that with what the Democrats are talking about. I mean, the Green New Deal, just think about how laughable — cows are banned, planes are banned, all this stuff is lunacy.

“And yet, all their presidential candidates are talking about it because they’re scared to death of AOC and the squad. This, you know, kind of high school squad. So the President has a great message in terms of what he’s done to get the economy moving to get this country back on track.”

“First let’s go ask the Democrats what have they actually done to stop gun violence? Every time that there’s a mass shooting, and I’ll tell you from personal experience Laura, the first thing we should all be doing is praying for the victims.

“Instead they’re running for TV cameras to promote some bill that’s going to take away the rights of law-abiding citizens. And admittedly, even by most Democrats they’ll tell you that their bills wouldn’t have stopped some of these mass shootings, and so President Trump’s been actually focused on solving the problem. If you look at what he did with the Fix NICS bill that he signed into law — that was focused on putting more data into the NICS system, the background check system of criminals.

“There are a lot of criminals, people who committed actual crimes that should have been stopped from buying a gun and committing a mass shooting, but the data wasn’t put in the system, even including mental illnesses — and that was the case, by the way, in Charleston and Sutherland Springs, even in Parkland.”

On the Democrats’ background check bills:

“Well, their ideas — and look Beto O’Rourke probably summed it up the best when he said he wants to take away your guns. That is their agenda, and if you look at their background check bill, you know they use the term background check and people think, ‘hey what’s wrong with that?’ And we have a background check system, by the way, that has problems that we’ve been working to fix.

“Their idea is to say if you’re a law-abiding citizen, you want to loan your gun to a friend, you can’t do that or you’ll go to jail for up to a year. That’s lunacy. The idea that your friend may be your neighbor who’s been beaten by her ex-husband and she wants to defend herself — under Pelosi’s bill she’d have to wait up to twenty days to get that gun. Try to tell the perpetrator to wait twenty days.

“The President said he’s willing to work with Republicans and Democrats to solve the problem of gun violence. Pelosi hasn’t shown she’s interested in solving that problem. Her agenda is focused on taking away the guns of law-abiding citizens and just look at the bill she filed. Even on background checks it wouldn’t have stopped any of those mass shootings.” 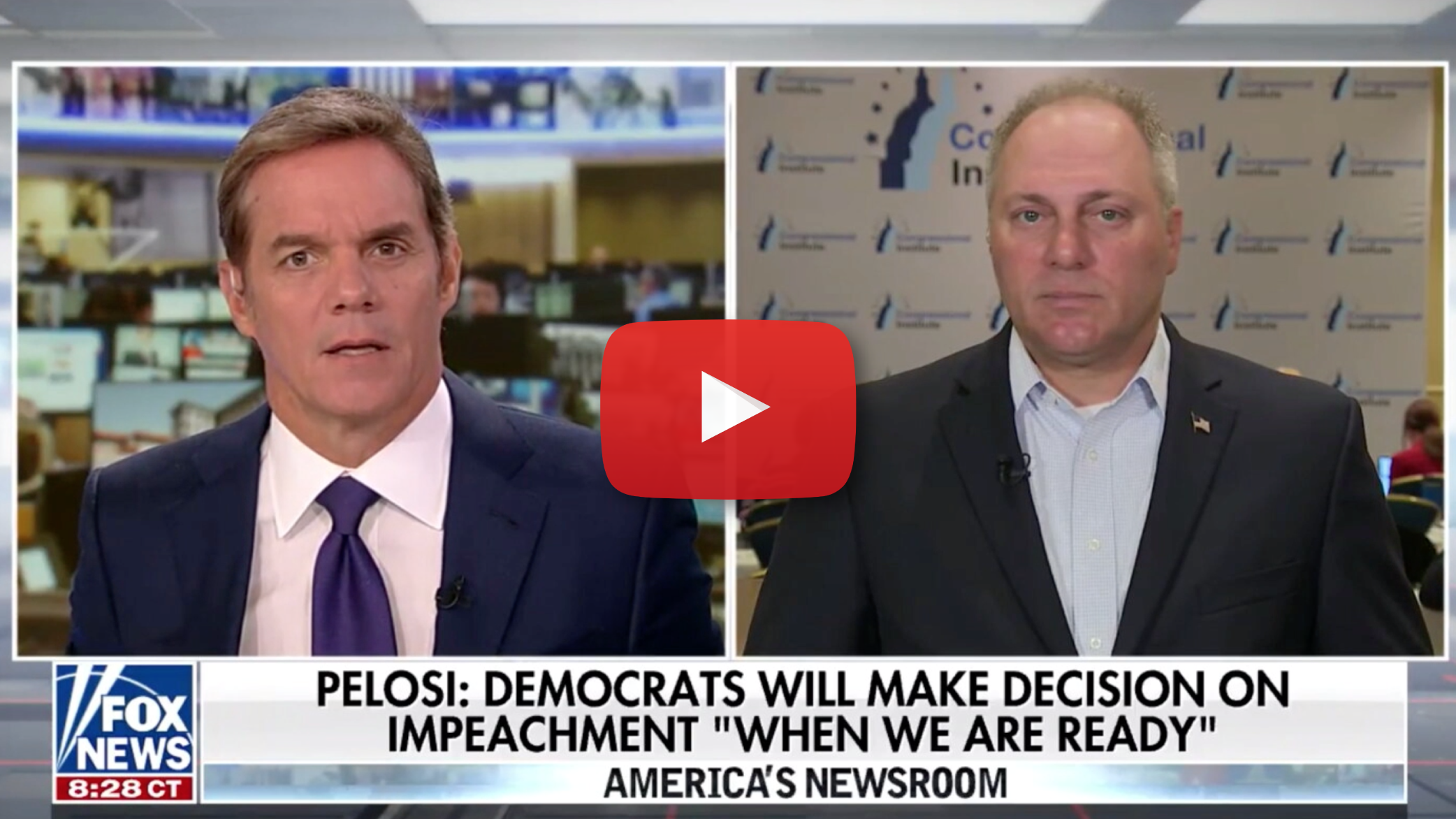 “And this was a real problem in some of these mass shootings like Sutherland Springs, like Charleston, even in the Parkland case. The shooter shouldn’t have been able to buy a gun based on his past, yet the data wasn’t fed into the background check system. Let’s make it work so criminals aren’t the ones buying guns, but law-abiding citizens still have the ability to exercise their 2nd Amendment right to defend themselves.”

On Speaker Pelosi condoning impeachment while the Judiciary Committee ignores the crisis at our southern border:

“This is irresponsible, it’s reckless, she ought to confront it and say we’re not going to move towards that. The Mueller report showed that there was no collusion, showed there was not any kind of obstruction of justice — they need to move on.

“This is the committee, by the way, Bill, that has jurisdiction over the border crisis. And instead of solving the crisis at our border, they’re just infatuated with these with hunts and impeaching the President, even though, by their own admission there is nothing yet to impeach him on. They still want to move it forward, and Nancy Pelosi won’t shut that door, which means she condones this radical, reckless effort.

“They need to focus on their job, solving these big problems for the country. Stop harassing the President every single day just because they don’t agree with the 2016 election.”