WASHINGTON, D.C. — House Republican Whip Steve Scalise (R-La.) spoke on the House floor today ahead of the vote on Speaker Pelosi’s $3 trillion, 1,800-page liberal wishlist. Whip Scalise highlighted both what is in this atrocious bill — including billions of dollars for taxpayer-funded abortions, stimulus payments to illegal aliens, federalized elections, and billions of dollars to bailout poorly-run state governments — and what is notin this atrocious bill — including money to bring jobs and critical manufacturing back from China, funds for personal protective equipment (PPE) manufacturing and distribution, and real solutions to help out families, small businesses, and American workers.

Scalise also criticized Democrats for targeting American steelworkers while allocating billions in assistance to illegal immigrants. In closing, he blasted Speaker Pelosi for refusing to bring the House back to Washington to perform its constitutionally-mandated duties. 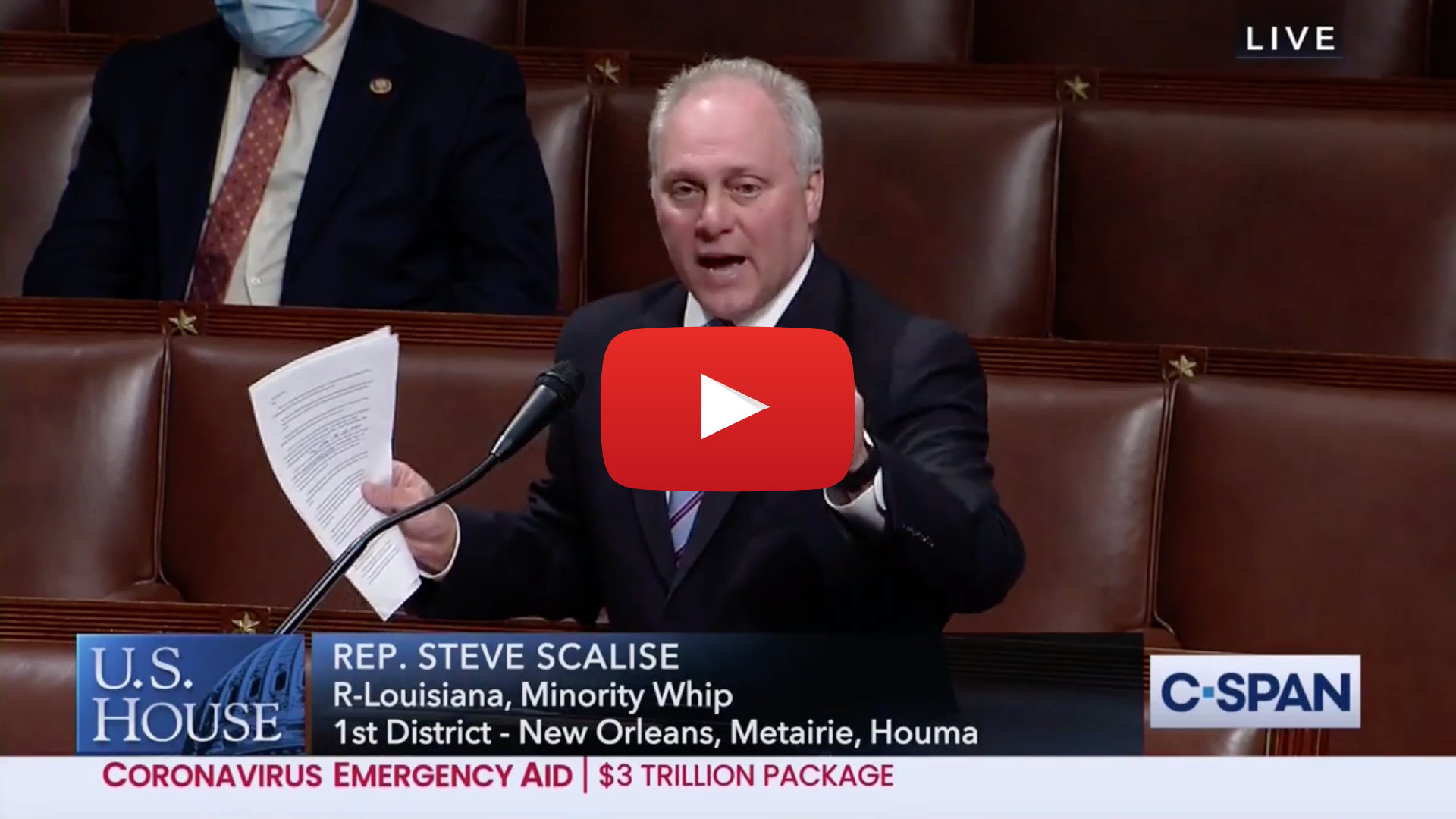 “Mr. Speaker, we’re here talking about Speaker Pelosi’s, $3 trillion socialist giveaway plan. If you look at this bill, we’ve talked about what’s in the bill, we should also be talking about what’s not in the bill and of course while they have $500 billion in this package for states, including many who already wrecked their economy and had billion-dollar deficits prior to COVID-19 — $500 billion to bail them out, and keep in mind, Mr. Speaker, we already gave, working together, $150 billion to those states and they haven’t even spent all that money. They haven’t spent all that money.

“But in this bill, $500 billion to bail out states who were failing prior to COVID-19. What’s not in this bill, Mr. Speaker? Money to hold China accountable for this whole mess. No money in this bill to hold China accountable. But again, what’s in this bill? Billions of dollars for people who are here illegally. Just look at this one page in the bill, just one page, two-word change that makes accessible hundreds of billions of taxpayer dollars to people here illegally. It’s in the bill.

“And just what happened the other day — let’s talk about American companies that [Democrats] are going after right now. Just a few days ago, the Democrat majority sent a target letter to a number of businesses who employ blue-collar workers all around America, [including] a steel company right here in Pennsylvania and Ohio and New York — steelworkers — and they demanded in the letter, ‘We ask you to return these funds immediately.’ So hundreds of steelworkers will go out of work based on the letter the Democrat majority sent out and today they’re saying illegals can get that money. So you’re taking it away from steelworkers, shipbuilders, truck drivers and you’re turning around and giving it to people here illegally.

“What kind of set of priorities is that in the middle of a pandemic. Again, what’s in the bill? You’ve got hundreds of billions of dollars for all these other things — billions for taxpayer funding of abortion in the bill. What’s not in the bill? Money to bring jobs back from China. PPE. You just saw the President yesterday in Pennsylvania celebrating a company that’s making PPE. So much of that is made right now in China. We’re trying to bring that back because China is using their leverage to hold us hostage — not sending PPE, not sending lifesaving drugs. How about we make that in America? But no, there’s no money in this bill for that. But then this bill mandates that states do things that would wreck their election laws — things like forced mail-out ballots, again, to people here illegally.

“Telling states they can’t have integrity laws that would require a picture I.D., Mr. Speaker, to get into the Democrat National Convention, you’ll need to show a picture I.D. But if your state says you have to show a picture I.D. to vote, [Democrats] would knock that off the books. What set of priorities is that? And by the way, what does that have to do with COVID-19?

“My goodness. We work together to pass a bill to help families, to help small businesses. . .

“And again, I want to look at what is not in this bill and what is in this bill. We work together, Republicans and Democrats alike, to come up with a package of bills that will help families, small businesses, hospitals, frontline workers.

“We did that together working with President Trump and then all of a sudden, not when we were here, but when everybody was forced to work remotely, we see this package of 1,800 pages dumped on us by dark of night, that does all of these things that have nothing to do with this outbreak. We should be working together to help safely reopen, like 36 states have already done successfully.

“Congress should be here working, leading, not working remotely. We have proven today and we proved a few weeks ago — we can be here safely doing our job, like all the frontline workers are safely doing their job.

“Let’s get this country back open safely. Let’s work together to get it done. Drop this wishlist — thank goodness this will not become law, but it shows you the misguided priorities when you see a bill with so much garbage like this.

“Mr. Speaker, I urge a no vote and I yield back the balance of my time.”