WASHINGTON, D.C.—House Republican Whip Steve Scalise (R-La.) pressed Majority Leader Steny Hoyer (D-Md.) in today’s colloquy to explain the deeply flawed process that House Democrats have used to pursue the impeachment of President Trump. Whip Scalise pointed out that Chairman Schiff has targeted his political opponents’ phone records, Chairman Nadler has denied Republicans the minority hearing they are entitled to under House rules, and they have both called committed partisans without firsthand knowledge of the underlying events to advocate for the impeachment of an innocent president.

All the while, Democrats have accused President Trump of any number of different crimes, yet been unable to provide any direct evidence that he has committed impeachable offenses. Given that over 100 Democrats voted to impeach President Trump before the July phone call took place, it’s no surprise they’re not giving him a fair shake.

On Democrats bringing baseless impeachment articles to the Floor: 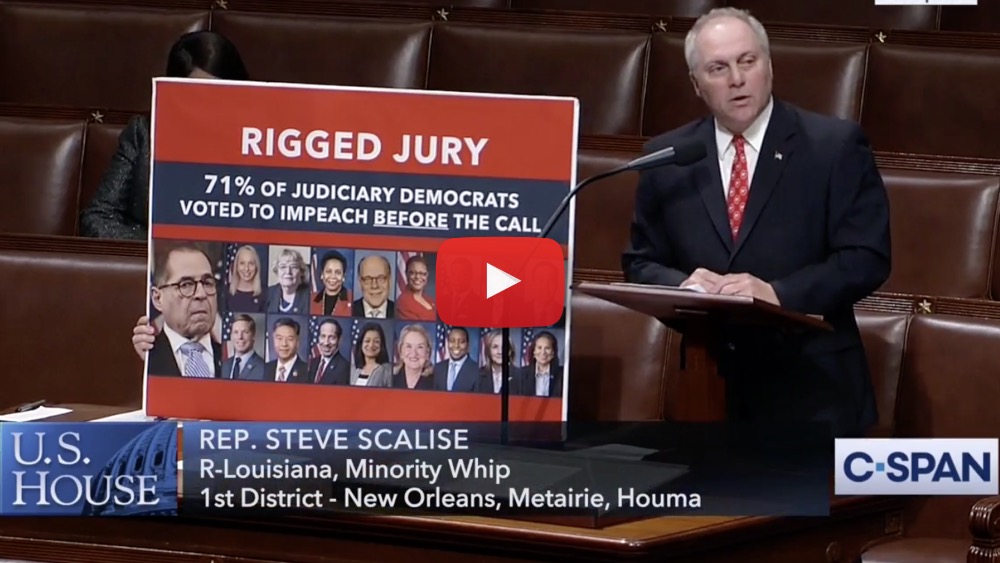 “When you look at the articles of impeachment at the beginning of all of this, of course, there was the Mueller investigation for 22 months, which alleged many things. And ultimately, the results turned out that there were no crimes committed by the President. As we had looked into when we were in the majority and knew that years ago, but for whatever reason others wanted to continue making assertions, those assertions turned out to be false.

“And so instead of dropping it there, then you had the whistleblower complaint and the allegations of all of these things that happened on a phone call. Only problem is, the President then released the transcript of the phone call and not only did those things not get reflected in the transcript, but the two people who actually participated, who should be listened to the most, both said there was nothing wrong with the call. President Zelensky was asked, was there any pressure applied? He said no, he got the money, he got the money and he also got the Javelin missiles. He thanked President Trump on the phone call for the aid that allowed him to push back Russia. And as I’ll point out, President Trump sold 360 Javelin missiles to Ukraine so they could defend themselves pushing back against Russia. President Obama and Vice President Joe Biden sold zero Javelin missiles to Ukraine to help them push back from Russia.

“So, all of this assertion that one President’s not allowing Ukraine to get the aid they need to stand up to Russia, turned out to be true. President Obama’s the one who didn’t allow Ukraine to have the tools they need. He sold them zero, they asked, ‘please sell us the Javelin missiles so we can defend ourselves against Russian aggression,’ and President Obama and Vice President Biden said no. Why? That’s a good question. Maybe somebody wants to open an investigation into that, but in the meantime, President Trump said yes. He actually sold [Ukraine] 360 Javelins. President Zelensky, on the call, thanked him. Was there pressure applied? Actually there were thanks involved. President Zelensky thanking President Trump for allowing him the tools to stand up to Russia. He said we may buy more, but he thanked him for the ones that he sold. No quid pro quo, there was no investigations. They asked for help and President Trump said ‘absolutely, we will help you stand up to Russia,’ and the facts are there.

“And then you look at the catch-all articles of impeachment. It wasn’t the bribery and the quid pro quo that were alleged for months, because there was none. And so that’s not in the articles of impeachment. So, you see these catch-all phrases like ‘abuse of power,’ ‘obstruction of Congress,’ and then you read what they allege to be obstruction of Congress – it’s the President exercising his rights. The different federal agencies that were asked for information, this is the obstruction of Congress. These federal agencies all responded, they responded to the committee, said here, let’s have a conversation about how to get you information that you want without violating the executive privileges that every President’s been afforded.”

On the lack of criminal evidence in the Mueller report: 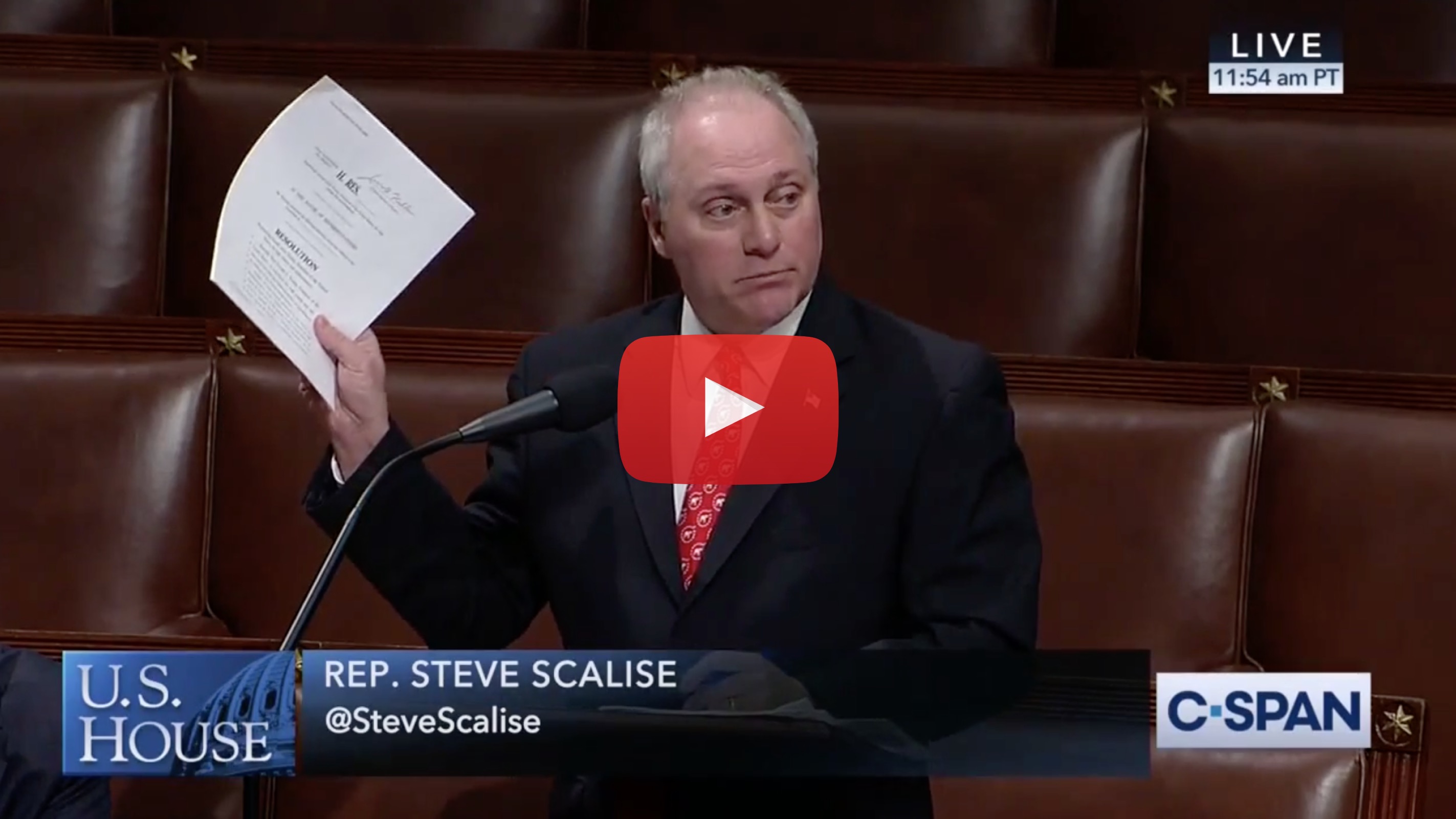 “The gentleman cites the Mueller report. The whole investigation that went on for 22 months with thousands of subpoenas, witnesses, innuendoes, and at the end of the day, with the full authority, by the way, Mr. Mueller had to file any criminal charges. If there were any laws broken that he saw, not one charge was [brought forward], and you know what’s the most interesting and maybe the most telling, is that in your articles of impeachment, eight pages that you filed, not one time did you mention the Mueller report, because there is nothing criminal in the Mueller report. If there was, you would have put it in the articles of impeachment.

On House Democrats’ abuse of power during this sham impeachment process: 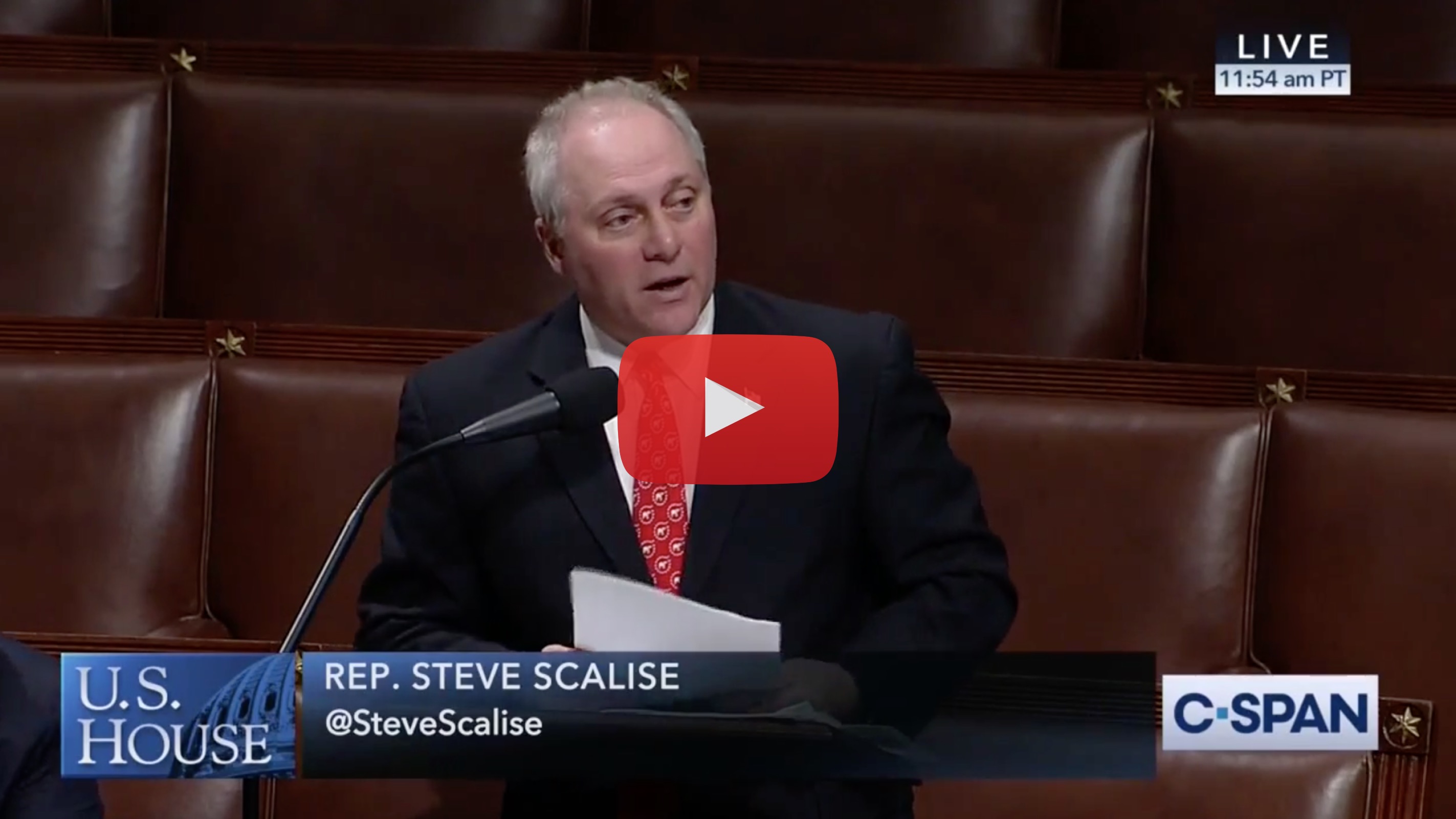 “You want to talk about abuse of power? What’s going on in that Judiciary Committee right now is an abuse of power. Denying the minority the ability to even present the other side of an argument. You’ve got two sides of any argument, and maybe you think you’ve made a strong case if you only present yours. You look at what’s going on across the country when only one side’s been presented, the country still thinks this is a waste of time. Not going after a President because he broke the law, but going after a President because you don’t like him, you’re unhappy that he got elected in 2016, and you’re afraid he might get elected again in 2020. Well you know what, I trust the people of this country to make that decision next year, and they will. Not Members of Congress who have expressed that they wanted him impeached before he took the oath of office. Members of Congress on your side who said, ‘impeachable offenses aren’t required to impeach a President.’ And so, when we talk of abuse of power, absolutely – that’s an abuse of power.” 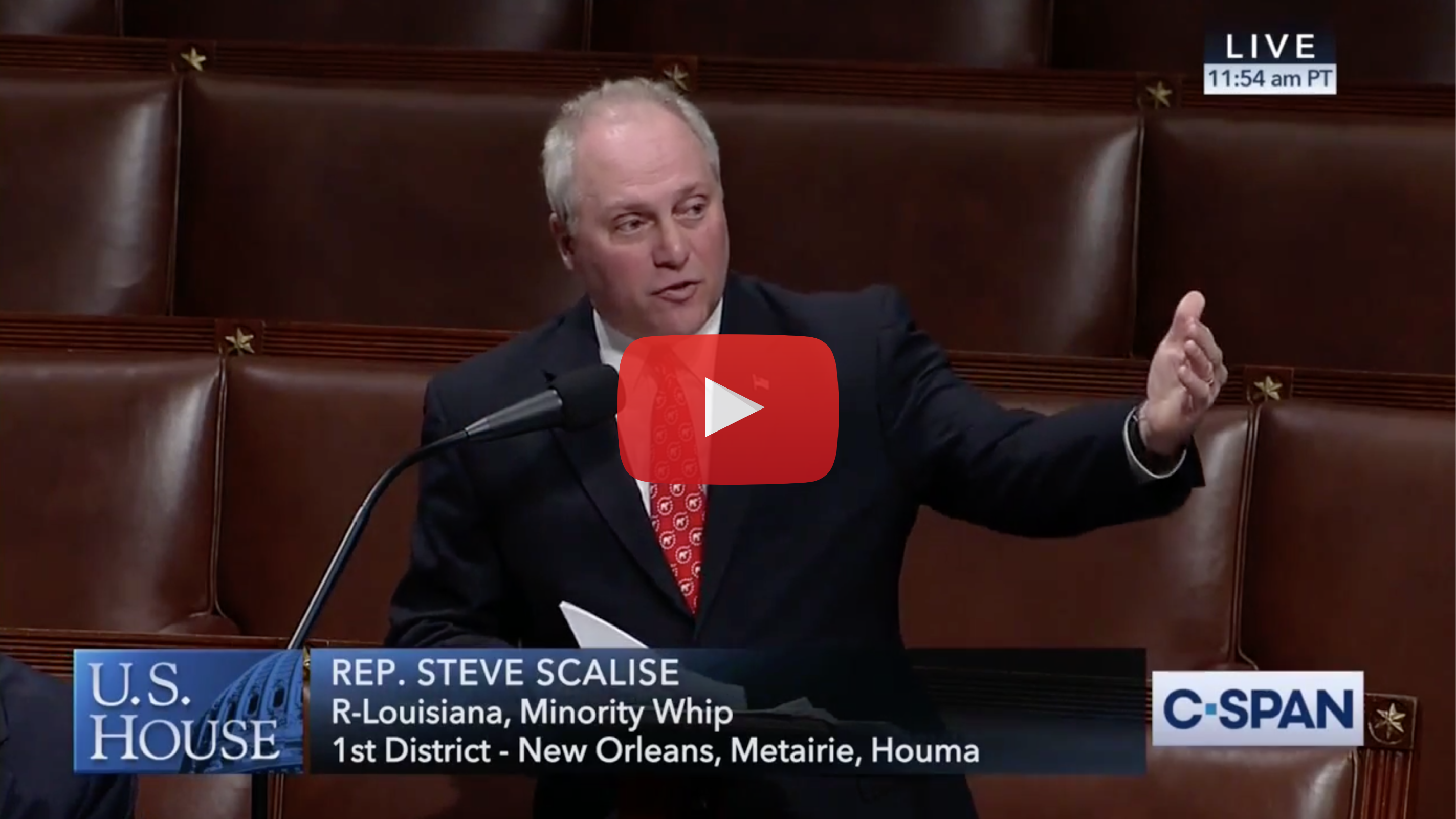 Click here or on the image above to watch the clip.
“But then you look at something equally alarming that’s come out, that deserves real attention in this Congress, and that’s the Horowitz report. Seventeen listed abuses of the FISA process. The gentleman knows, and I supported the FISA process to allow us to combat terrorists. It’s a controversial program, a program that’s got a very narrow scope to allow the United States to protect our national security, but it also has a very strict requirement from our intelligence agencies. The FBI, the CIA, have the ability to go unfettered and ask the judge for the ability to surveil people, and the judge trusts that they’re giving him the full information. And we saw abuses listed in that Horowitz report of the FISA process. Even more, Mr. Durham, is initiating and conducting his own criminal investigation. And what the Attorney General talked about this week, is that they know that there are people in those intelligence agencies who were spying on the Trump campaign.

“Imagine federal agencies – FBI, CIA – spying on the campaign of a candidate for President. Republican or Democrat, we should equally be alarmed that that happened. I hope it gets rooted out. I hope whoever did that and abused their power, goes to jail. But it happened and it’s being investigated in a criminal way. But Horowitz himself pointed out where there were abuses of the FISA process. And you know what? That’s coming back up to this Congress early next year for renewal. Parts of that program will come back up again. Important tools to combat terrorism, but tools that now have been identified to have been abused. We need to work together to clean that up so that doesn’t happen again. But that happened, and it was used against the Trump campaign. I haven’t heard the disdain and outrage from both sides, I’m surely outraged, our side is surely outraged, I would hope we’re all outraged that that happened. But when we talk about those reports, again, if there were all of those things that the gentleman asserts in the Mueller investigation and ultimately report, I’m curious that not one of those things, not any mention of the Mueller report in these articles of impeachment that we’ll be facing on the House Floor next week.”

On Democrats breaking House rules to block the minority from unveiling the truth about their sham impeachment: 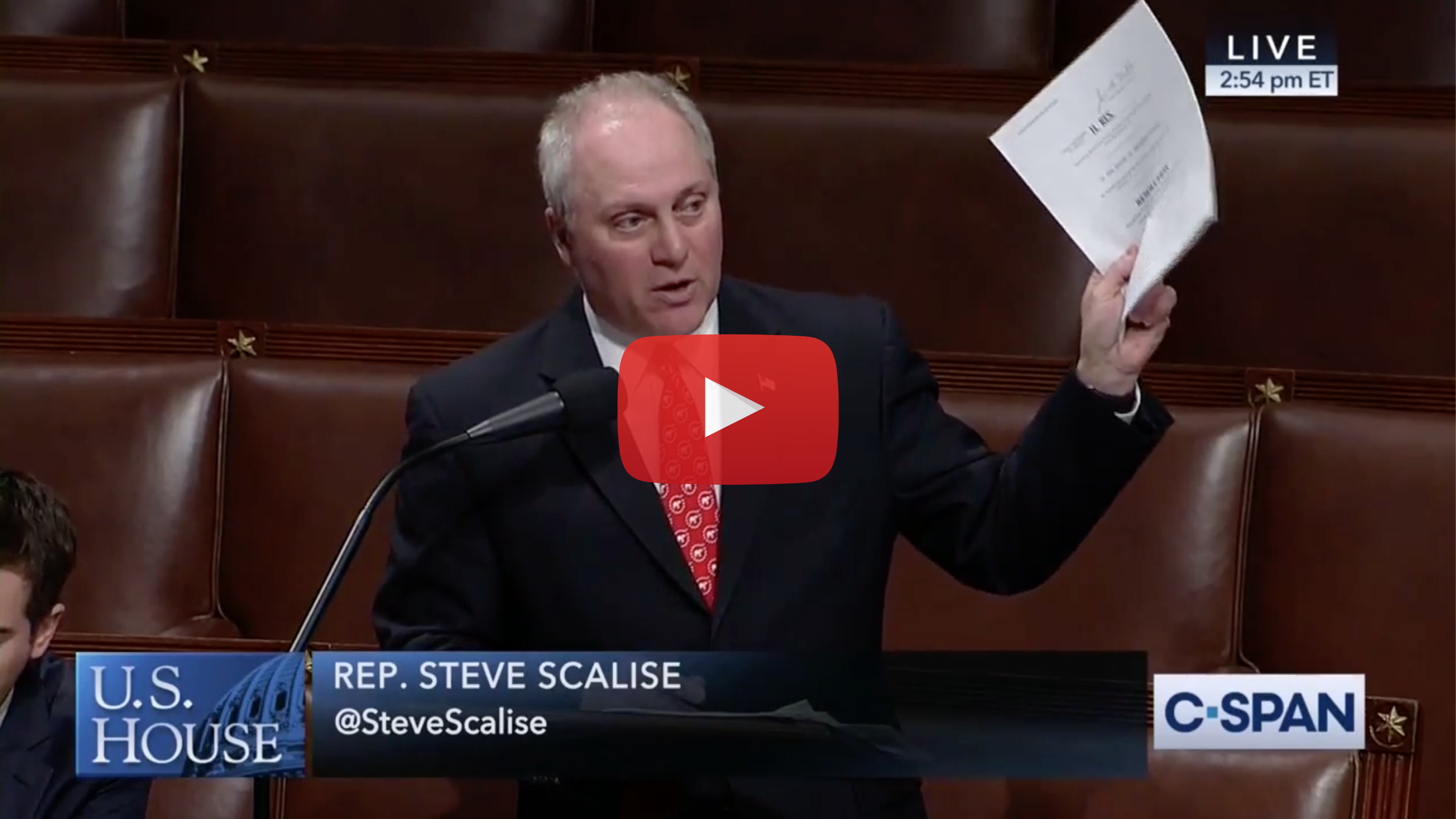 Click here or on the image above to watch the clip.
“Just today, yet another rule has been broken. House Rule, Clause 2(j)1 of Rule 11 provides that once the demand is made for a minority day of hearing, minority members shall be entitled – shall means it has to happen – to call witnesses selected by the minority to testify with respect to the measure or matter during at least one day of hearings thereon. Well guess what? That didn’t happen. We requested it multiple times and the rules that the gentleman said, the rules have been followed, the only problem is the rules been broken. Shall be entitled to a hearing and it’s been denied. The Chairman denied it again today.”
On Democrats’ mission to impeach President Trump from day one, despite any evidence of an impeachable offense: 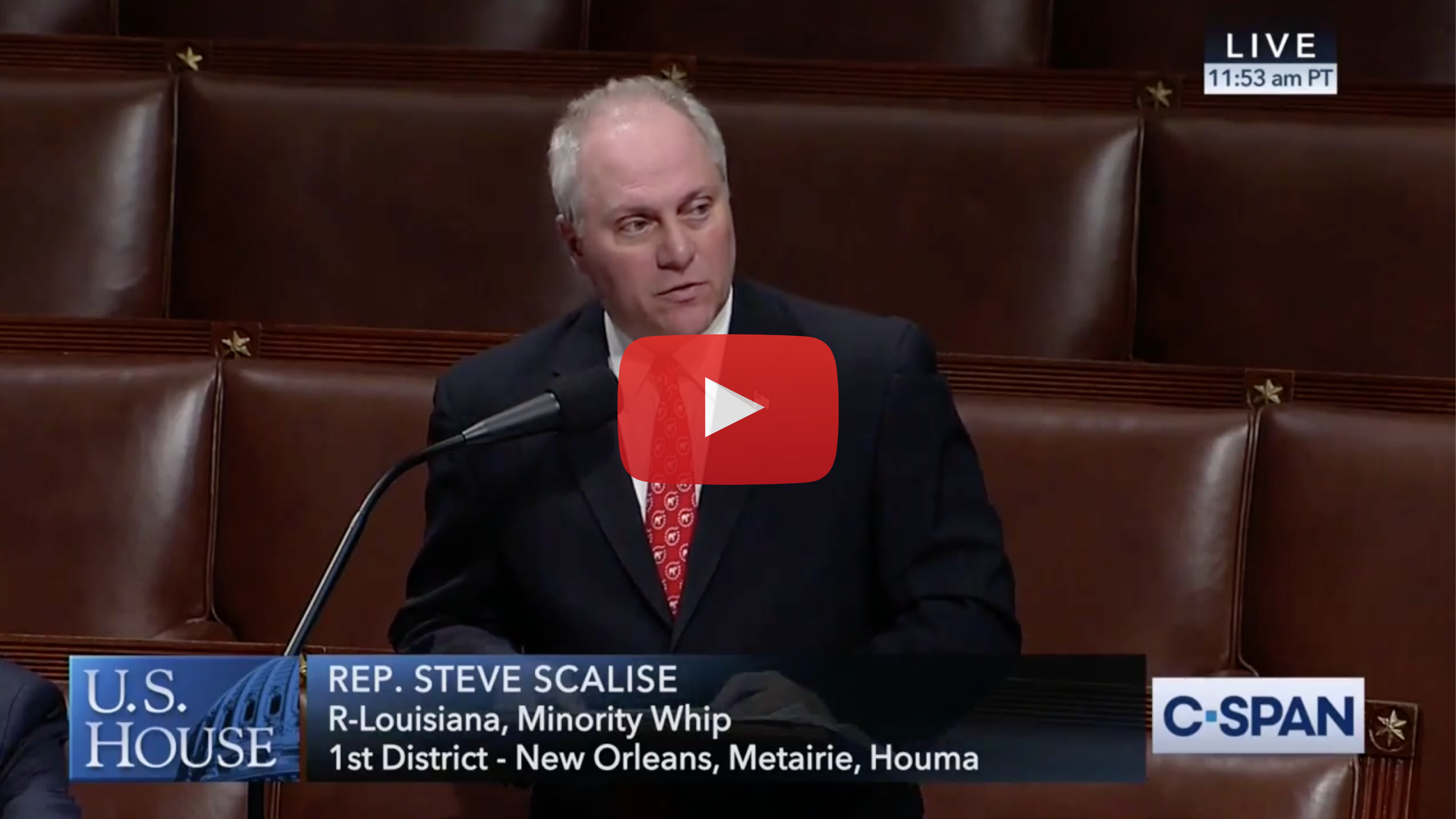 Click here or on the image above to watch the clip.
“Then you allege that [President Trump] conspired with Russia, but he didn’t. Russia tried to interfere on Barack Obama and Joe Biden’s watch. It was their watch that it happened. President Trump didn’t have any involvement in that, and the Mueller report made that clear. But then you kept going on make assertion after assertion, just like in these two articles of impeachment and you come up with abuse of power. And to quote [Professor Jonathan Turley], one of the witnesses from last week, ‘the only abuse of power is by this majority trying to remove a President from office for exercising his rights under the law.’ A week after your request, your subpoena, a week after you got a letter from the Secretary of Defense himself and that’s enough to impeach a President.”