Whip Scalise also slammed Speaker Pelosi’s select committee to harass the President over his Coronavirus response, and suggested Democrats should instead be focused on working with President Trump and Republicans to safely get America back to work. 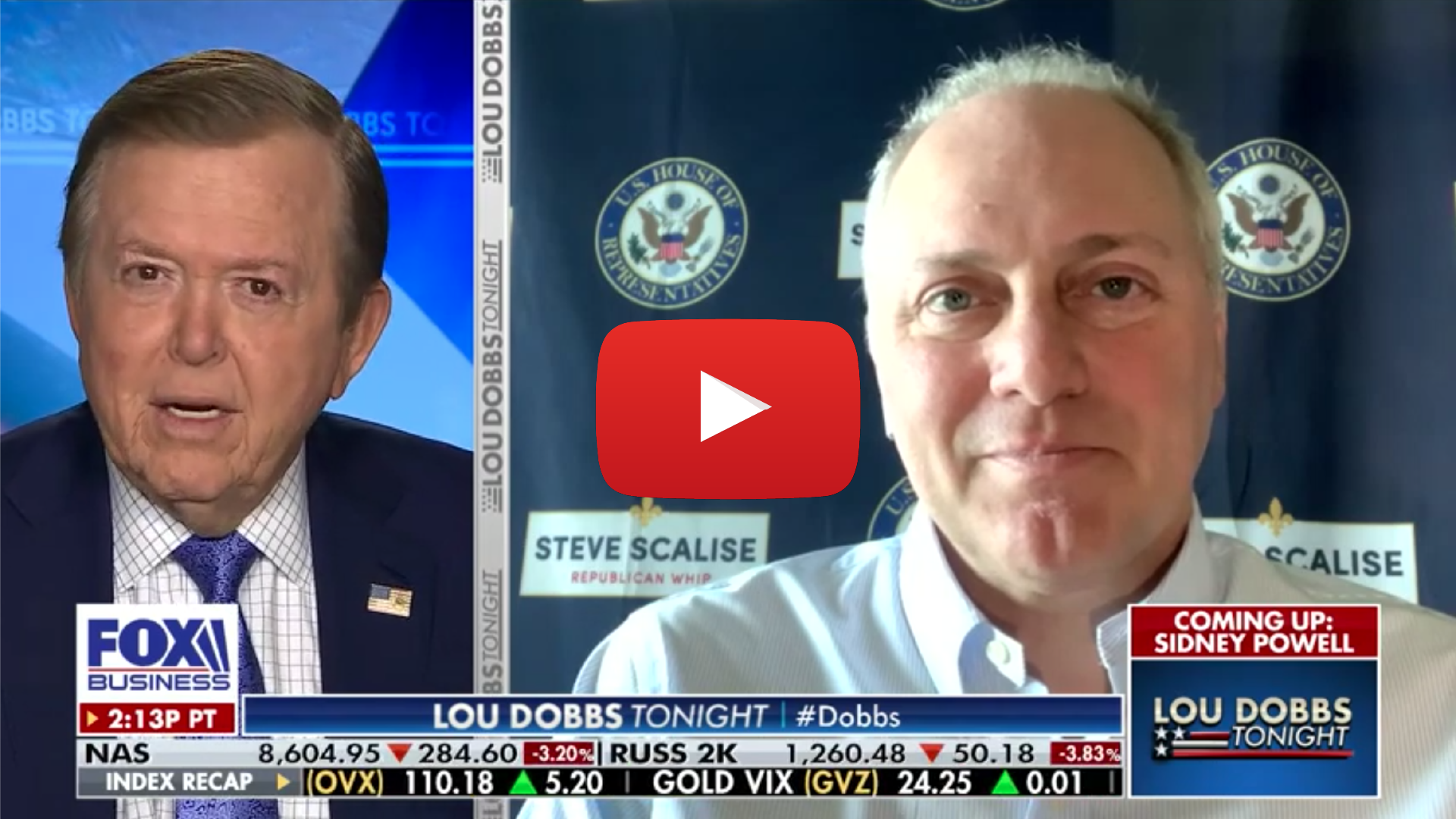 On Democrats’ endless attempts to harass President Trump instead of working on behalf of the American people:

“Lou, I think when you list those names that you just mentioned [on Speaker Pelosi’s new House Oversight panel], I mean those were all people who have been very rabid, people that have been just focused on the impeachment of Donald Trump regardless of fact. And, you know, of course they all voted for the hoax impeachment and you’re seeing this whole thing blow up with these latest papers that have come out that show that they were targeting Flynn, they tried to set him up. The dirty cops over at the FBI, I’m sure we’ll talk about that, that’s got to be dealt with. I wish they were focusing on that and cleaning up the problems within the FBI so that the vast majority of our FBI agents who do such a great job defending our country can be exonerated, but the bad cops need to be held accountable. And frankly, I think some need to go to jail. That’s where the focus needs to be, holding China accountable, not this continuous drumbeat of just harassing the President. [Democrats] have never wanted to work with him on anything. They just want to harass him every day, they impeached him, they’ll probably try to do it again. Let’s pull together and solve real problems, let’s focus on getting our economy back open so we can get Americans working safely, dealing with this virus. Not just the daily drum beat of trying to find something to beat the President up on.”

On the need to hold bad actors at the FBI accountable for their misconduct:

“Well look, Devin Nunes has been right from the very beginning, and you can go back over, you know, years ago before the Mueller investigation even started when Devin said, he’s seeing things that are really concerning within the FBI, with people that abused the FISA process. I saw some of that classified information, and it concerned me as well that enough wasn’t being focused on people who abused their power, Lou. You’ve highlighted this, but Devin was beating that drum from the very beginning. And, you know, we saw others of course like Jim Jordan, and Mark Meadows, who’s now the Chief of Staff to the President, raising alarm bells, and the Democrats wanted to try not to expose it, but to cover it up because as it turned out these were people that were very pro-Hillary Clinton, people that hated Donald Trump. They were using their badge in essence, you know, these are FBI agents abusing their positions of power to try to take down a candidate for President of the United States, and it continued when Donald Trump got elected. They literally tried to set Flynn up, they tried, Comey tried to set the President up. These people need to be held accountable.

“I don’t think it stops at Strzok and Page, I think that’s just the beginning. You know, and the Durham investigation’s been going on long enough, we’ve seen enough to know there are people that need to be brought to justice today, and I think a lot of these people are going to roll over on the folks higher up, and it may go as high as Comey. I wouldn’t be surprised, this all happened under the Obama Administration. I wonder if President Obama knew this was going on right under his nose with his FBI trying to take out a candidate for President of the United States. Nobody, Republican or Democrat, candidate for President should have agents of the FBI abusing their power to try to undermine an election in America. We’re already concerned about Russia, we need to make sure we’re doing enough to stop Russia. Which, by the way, they tried to interfere with our election when Obama was President, but we shouldn’t have our own law enforcement agencies doing it. There needs to be accountability, people need to go to jail starting with Strzok at the top there.”

On President Trump’s tribute to our frontline healthcare workers in New Orleans:

“We had a great flyover [in New Orleans] today, and just blocks from my house, Ochsner Hospital, one of those great places where our doctors and nurses, the frontline workers, are taking care of people. You know, New Orleans of course was a hotbed of Coronavirus and they did a flyover today. The President said he’s going to do this in a lot of cities to pay tribute to our first responders and our hospital workers. B-52’s and F-15’s flying over, you could feel the roar and the thunder. I posted a video on my Facebook page and over on Twitter we sent out a video of this fly over, and it was just, it gives you goosebumps, reminds you of just what’s great about America.

“People are ready to start getting out, knowing we’re going to be doing things safely. This isn’t about taking risks or letting our foot off the gas, it’s about saying we know that this disease is out there, but we’re America, we need to start opening our business again. People want to start getting back to work again, using safer protocols, but we can’t keep this economy shut down for another month or two months and think that there’s going to be something to go back to that we would want to see. We’ve got to start getting this this going, and it was a great tribute today to see that flyover. President Trump is leading the way, and this was another good example of how the President supports those who are supporting us – our first responders and our hospital workers.”