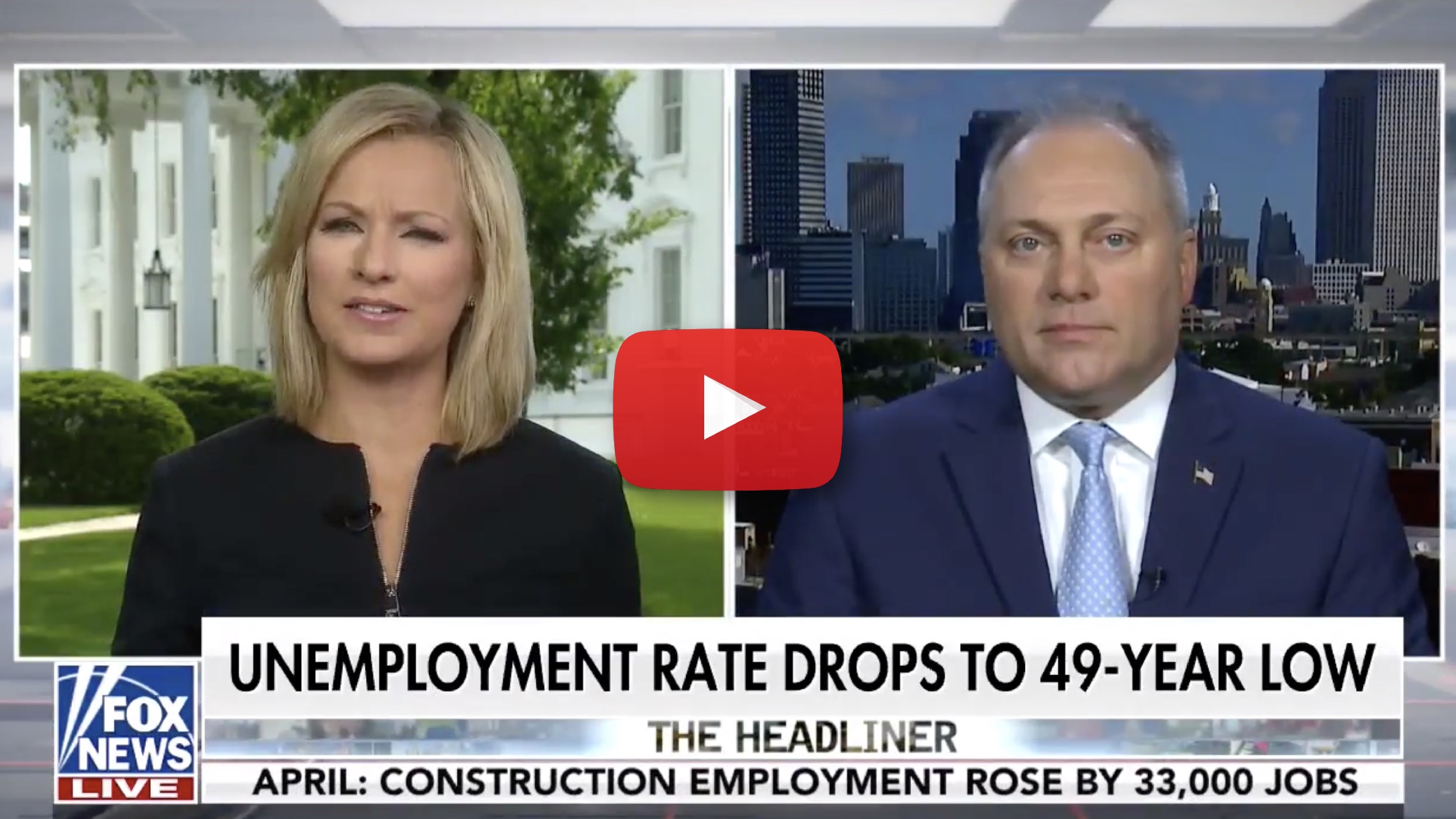 Click here or on the image above to watch the interview.
On the booming economy and April jobs report:“This is great news for American workers, when you look at the numbers—268,000 new jobs. The estimates were that it was going to be less than 200,000, so this is even better news than we were expecting. Like you said, 49-year low in unemployment. Wages are up for hardworking families. That’s really good news for those people that are trying to get into the middle class, become part of the American dream, that’s the best news. They are now seeing more money in their paychecks. Clearly, the work that we did with President Trump to lower taxes and get regulations under control is paying huge dividends for American workers today.”

“President Trump made it clear when he ran for President that he wanted to get the economy going again. He wanted to stand up and fight for American workers, those men and women who had been left behind for the last 10 years. It is working and delivering for those very people. This is great for the President’s message going into 2020. We want to keep this going.

“Why would you want to go back to government control, the government literally raising your taxes, and taking more control away, when President Trump’s proposals and the things that he has done and gotten signed into law, are actually working and delivering on those promises for those hardworking families? This is great news for President Trump and it’s even greater news for American men and women, hardworking families all across America who have been looking for relief for years and years and they have finally gotten it.”

On the prospects for a trade deal with China:

“Well, there is a real opportunity in the fact that President Trump is at least trying to get China to agree to fair trade. By fair I mean, stop stealing our intellectual property, stop dumping products and manipulating currency with real enforcement behind it. Even without that deal in place, we’re seeing this great economic news. Imagine if we get USMCA, the new agreement with Mexico and Canada and then get an agreement with China, where we can actually have real enforcement with teeth in place. All this is being done by President Trump’s Administration. With these great reports there is even greater opportunity if that gets done.”

On the contrast between Republicans’ efforts to grow the economy and Democrats’ presidential harassment campaign:

“That’s ludicrous to suggest that about Attorney General Barr and what he’s done. …These are the same people that promised for two years there would be this collusion with Russia and obstruction of justice. None of it happened.

“You are looking at a great contrast here, Bill. You have this great economic news because our policies are working. President Trump is delivering for American families. Speaker Pelosi and her liberal lieutenants missed the legal deadline to pass a budget just a few weeks ago. They have done absolutely nothing to lower health care costs for families who are seeing increased costs on health care and increasing deductibles. They haven’t done a thing for the American worker with their majority. All they want to do is keep harassing President Trump and harassing his Administration and family because they want to change the subject. They don’t want to talk about how great the economy is doing because they don’t agree with the proposals. It is a shame because families are benefiting from this. We should be celebrating the fact that families are seeing higher wages, but instead Speaker Pelosi doesn’t want to see those policies work. They want to keep going after President Trump and his Administration. People are tired of that.”

On the need to investigate the potential spying on the Trump campaign:

“I share those comments by Senator Graham. When you look at the 2016 attacks on President Trump… we’ve seen some evidence of spying on the Trump campaign by the previous Administration. They are going to have to answer for that. A lot more is coming out on that. What about the Steele dossier? There are more questions being asked about the motivations behind the beginning of this whole investigation.

“It was all going to be about collusion. There was no collusion. What did they spend the last two years doing? They spent over $35 million of taxpayer money going on this witch hunt and they still won’t give it up. People are ready to focus on the real issues that matter to families. Instead Nancy Pelosi and her liberal lieutenants want to smear, attack, and make crazy, radical statements with nothing to back it up.”

On the Vice President’s visit to Louisiana to meet with leaders of the three predominantly African American churches that were recently burned:

“The Vice President will be coming down to Lafayette. Right around this town of Opelousas, Louisiana, a very tight-knit community, you saw these three horrific burnings of these black churches that in some cases go back 100 years in these wonderful communities. For the Vice President to come and send a message that President Trump stands in solidarity with them and we’re going to be there with them to rebuild. There are fundraising sites already that have raised over $2 million to help them rebuild. We’re a resilient people in South Louisiana. This community in Opelousas is resilient. We appreciate that the Vice President will come down to meet with the leaders of these churches and send that message from President Trump that we’re standing with them. The prayers are real, and the concerns are real that we rebuild.”