TOPLINE: Europe’s rush to green energy and disregard for fossil fuels have created an energy crisis with no end in sight. If Democrats get their way and eliminate traditional energy sources, the United States will follow Europe’s dangerous lead, and we will experience the same energy shortages plaguing European nations.

Low-income and middle class families throughout the world are suffering because of short-sighted climate policies that ignore the reality of current energy needs.

Transitioning away from petroleum, natural gas, and coal is “delusional,” according to a report published by the Manhattan Institute. The pivot to green energy will fail because solar and wind technologies account for nearly 5 percent of global energy, and electric vehicles offset less than 0.5 percent of the world’s demand for oil.

There is only one way to lower energy prices significantly: Embrace an all-of-the-above energy strategy that unleashes American energy, including petroleum, natural gas, and nuclear power.

As a result of the European Union’s radical green policies and its over-reliance on Russian energy, households and small businesses are seeing firsthand the consequences of Green New Deal-style policies – energy is scarce and expensive.

With inadequate supplies of gas and other fuels, Germany is facing a brutal winter. Germany has begun imposing limits on gas consumption to avoid shortages, but Robert Habeck, Vice Chancellor of Germany, warned that an economic catastrophe will happen if gas reserves run low during colder weather.

Energy is so scarce in Spain that they issued a mandate requiring air conditioning in public spaces to be set at or above 80 degrees Fahrenheit. The measure will apply to offices, shops, bars, and restaurants, as well as public transport systems and transport centers.

While prices continue to soar and its citizens suffer, France became the first country to ban fossil fuel advertisements, doubling down on failed “green” policies.

A small business owner in Ireland went viral after sharing a photo of her electricity bill totaling nearly 10,000 euros, which was close to her annual power bill in 2021. Geraldine Dolan, the owner of Poppy Fields Café, anticipates paying more than 45,000 euros if she continues to keep her doors open for the rest of 2022.

As Europe’s energy crisis rages on, Democrats’ far-left green energy policies prevent us from taking steps to assist our allies. To add insult to injury, Democrats’ extreme climate agenda follows the same blueprint for energy disaster laid out by the Europeans, which will create similar problems in the United States.

By ending American energy independence, the Biden Administration has ensured that European countries cannot turn to our abundant resources to drive down natural gas prices and meet their home-heating needs. 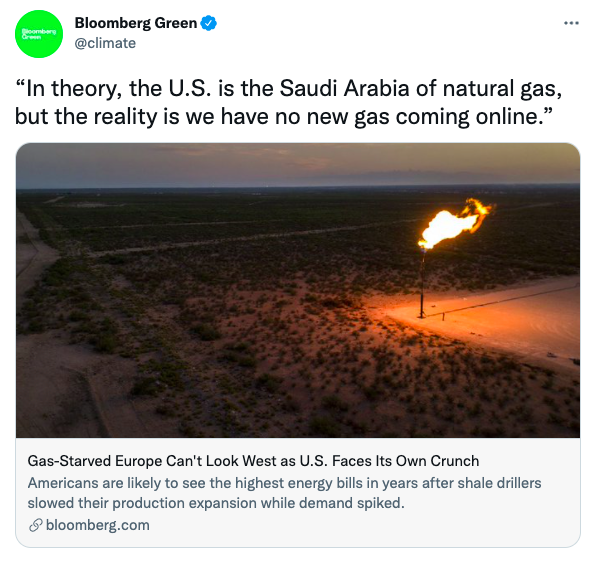 Due to surging energy prices and skyrocketing inflation, millions of Americans are struggling to cover the cost of basic necessities.

Europe’s self-inflicted energy crisis is an absolute disaster, yet President Biden and Washington Democrats want to replicate these failed policies.

In California, a bastion for liberalism and far-left causes, Democrats are reaping what they sowed.

On August 24, California announced a plan to ban the sale of gas vehicles by 2035.

Less than one week later, on August 30, California’s grid operator asked residents to avoid charging their electric vehicles and to voluntarily conserve energy due to anticipated stress on the power grid.

If you want to see why the Green New Deal would be an absolute disaster, look no further than California’s energy collapse and blackouts.