WASHINGTON, D.C.—House Republican Whip Steve Scalise (R-La.) joined Fox News Sunday to discuss how Democrats spent another week wasting the American people’s time and tax dollars on their sham impeachment charade. Whip Scalise blasted Democrats for being unable to present any direct evidence related to the quid pro quo they accuse President Trump of orchestrating with the Ukrainian President. Their star witnesses had no firsthand knowledge of President Trump’s supposedly impeachable activities. It’s time to end this impeachment charade that Democrats have been solely focused on since day one of the Trump presidency. 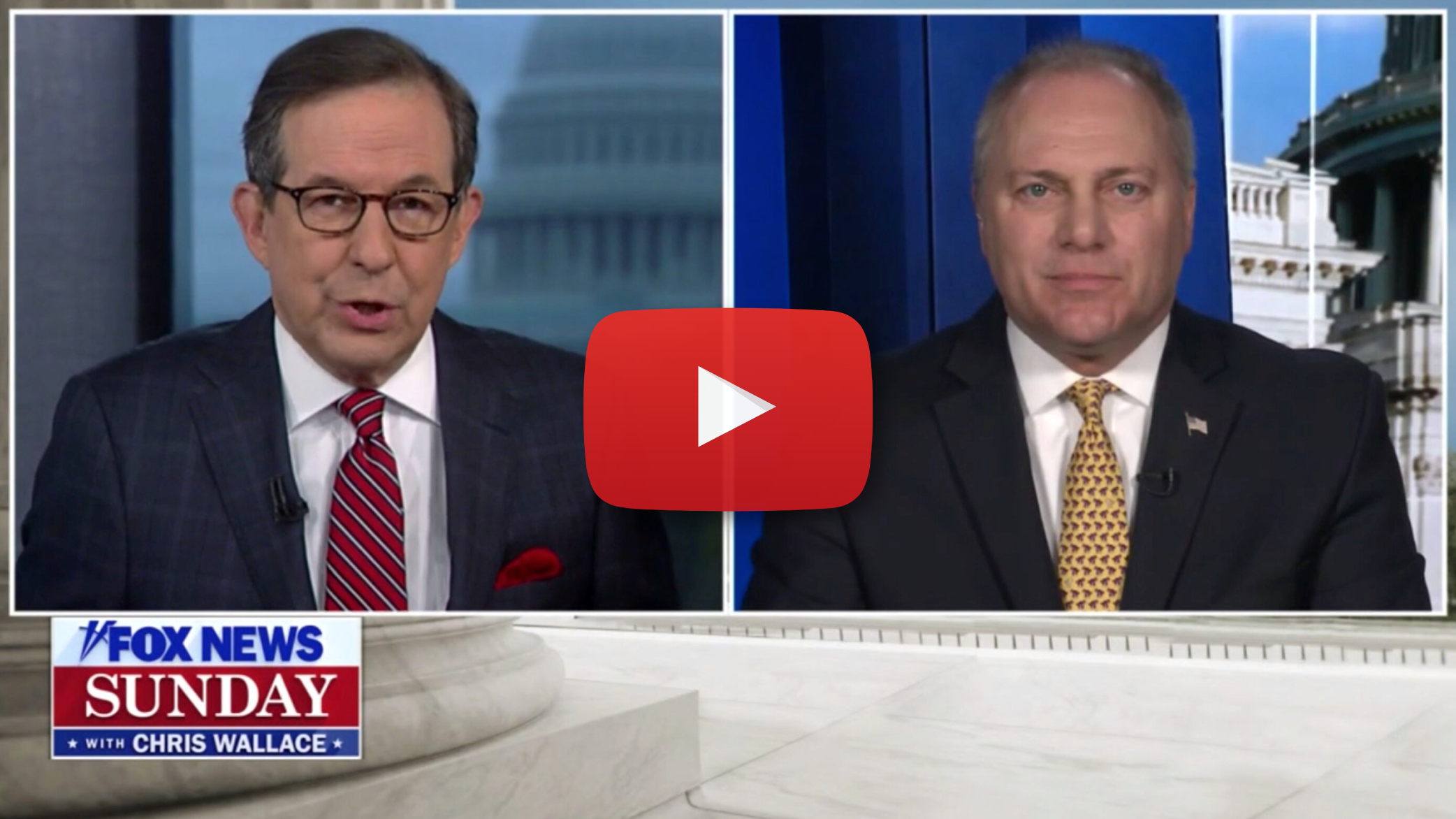 On President Trump rooting out corruption Ukraine and standing up to Russian aggression unlike President Obama:

“If [aid was conditioned on investigations], then President Trump wouldn’t have done all ofthe things that he’s done to help Ukraine stand up to Russia. And in fact, on the original Zelensky phone call that was released, President Zelensky was thanking President Trump for the things he’s done, like selling the Javelin missiles, which help them stand up to theRussian aggression, and the tanks. By the way, Barack Obama and Joe Biden would not sell Ukraine those same Javelin missiles and would not give that same kind of aid.”

“…In fact part of what Congress appropriated had language attached to it that required that the [Trump Administration] make sure that Ukraine’s rooting out corruption because there were elections during that same period you just mentioned, and Zelensky got elected on a platform of rooting out corruption, which we are glad about, but nobody really knew if that was what he was going to follow through on because of Ukraine’s history of corruption. Thelaw required that before any taxpayer money go to Ukraine, the President had to ensure that they are rooting out corruption, which ultimately they did, and the money was released and then he got the money he needed.”

“…We can talk about second and third and fourth-hand information of people who ultimately are going to testify. You can hear it from them on Wednesday. But what the facts are – did the money actually go to Ukraine? And even on the phone call with President Trump and President Zelensky, they talked about the steps that Ukraine is taking to root out corruption. It was something that Zelensky got elected on, a platform of [rooting out corruption]. Everybody knew that Ukraine had problems with corruption going back to possible interference that Russia also was involved in in the 2016 election.”

“Well, the President’s defense is that [quid pro quo] didn’t happen. And it’s not just thePresident’s word, President Zelensky himself said that the aide wasn’t conditioned and there was no pressure. And then because of some of these innuendos that you’re talking about, the Foreign Minister of Ukraine, just a few days ago, released another statement saying that there was never a link between aid and investigations. And once again, there were only two people that participated in that phone call – it was Donald Trump and President Zelensky. Both of them were very happy with the phone call. Zelensky said that there was no pressure. The real bottom line is he got the money. Ukraine got the money.”

On Adam Schiff keeping impeachment hearings as partisan and unfair as possible by blocking Republican witnesses:

“This is an important point, Chris. There are a lot of people who worked in the Trump Administration who have very countering views to that and they’ve not been allowed to come forward. So it’s nice that some people can say one thing about a thirdhand information phone call, there’s something else that other people can counter that with, and they haven’t been allowed to come forward. But ultimately, President Trump and President Zelensky were the ones on the call. Both of them said there was nothing wrong. TheForeign Minister of Ukraine just came out a few days ago to clear some of this up to say ‘there was never a link between money.”

On Adam Schiff’s star witnesses denying that President Trump was involved in any criminal activity:

“Look, I know you’ve been asking and others have asked hypothetical questions. Let’s talk in reality. Why don’t we look at the three witnesses who actually did testify this week. All three of them were asked by whether it was John Ratcliffe or whether it was Chris Stewart, all three of them were asked, ‘Did you see any impeachable offenses? Did you see any bribery? Any of that?’ Not one of those things were mentioned. Not one person said they saw a crime committed. That’s what this is about, isn’t it? Removing a President.”

On Democrats basing impeachment off of secondhand information and ignoring thefact that aid was released:

“The problem with that is, [withholding military aid to help with President Trump’s campaign] didn’t happen, Chris. The Ukraine Foreign Minister, based probably on some of[Ambassador Bill Taylor’s] testimony, said it didn’t happen. Zelensky said it didn’t happen. And those are the people directly involved. You can bring out people that have third and fourth-hand information. I thought this was supposed to be about finding facts. And if they’re going to try to impeach a President of United States, shouldn’t it be based on something that actually happened versus one person’s opinion of a third hand conversation? That’s what this is really all about.”

“Well, President Trump released the aide after he made sure, by law, by the way, and Pelosi voted for that law, Schiff voted for the law that requires that [President Trump] ensure that corruption is being rooted out before taxpayer money goes to a country like that.”