WASHINGTON, D.C. — House Republican Whip Steve Scalise (R-La.) joined Fox News Channel’s Fox & Friends this morning to discuss the five-year anniversary of the Congressional Baseball Game shooting. Whip Scalise reflected on how the brave U.S. Capitol Police and Alexandria Police Department officers saved both his life and the lives of several other Members of Congress that day on the ballfield.

In addition, Whip Scalise urged Speaker Pelosi and House Democrats to stop blocking legislation to protect Supreme Court Justices that passed unanimously in the Senate. Whip Scalise also emphasized that any gun legislation considered by Congress should not encroach on the freedoms of law-abiding citizens and make it easier for the government to confiscate legally obtained firearms without due process. 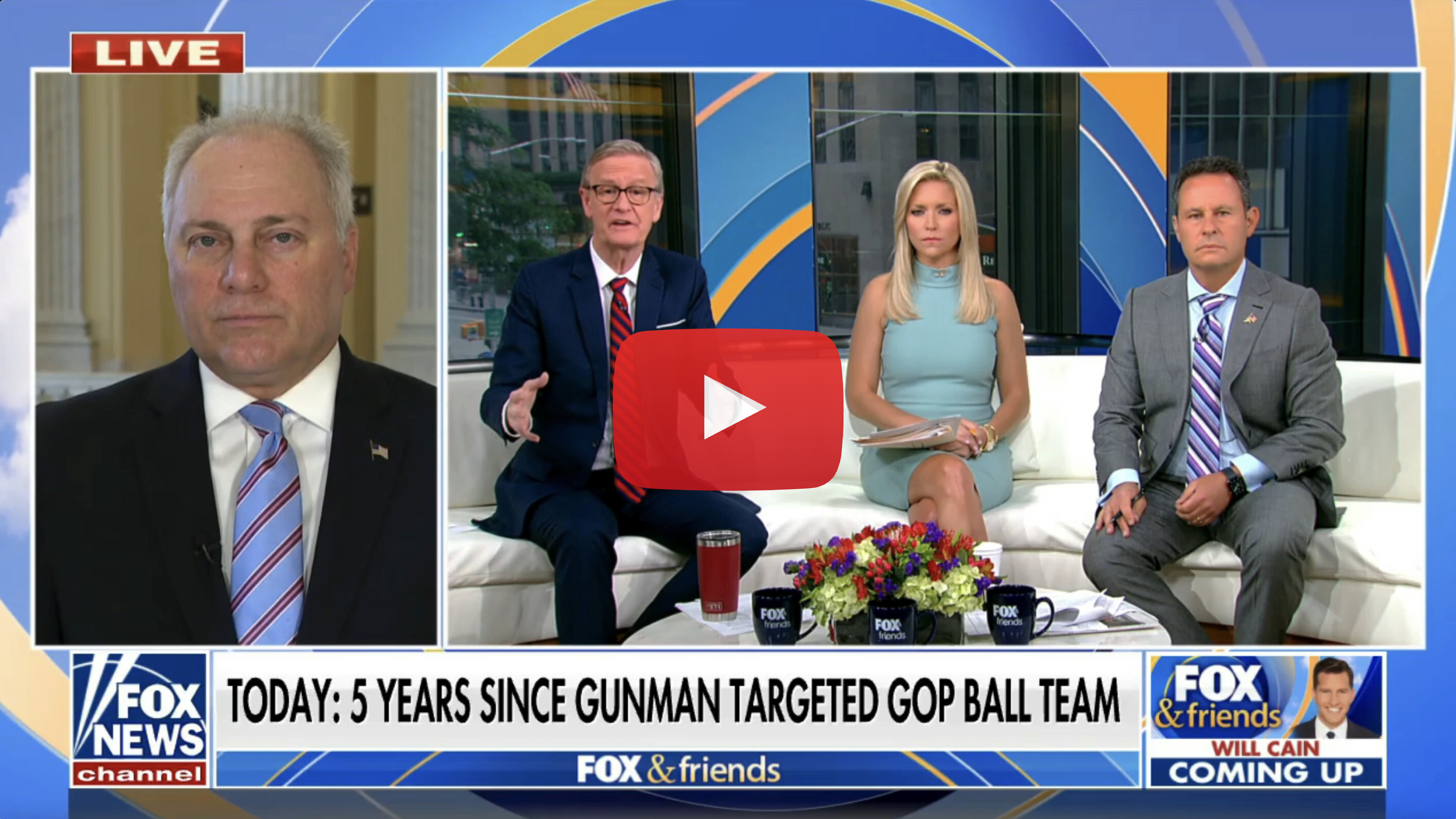 “You know, this is a question that we’ve been raising for over a month now. The bill came over from the Senate. As you point out – unanimously – that doesn’t happen often. But to make sure that Supreme Court Justices and their families can get protection.

“And then, of course, you’ve seen in the last few weeks, not only so many different protests at the homes of justices, but death [threats like] the man that showed up at Justice Kavanaugh’s house trying to kill him, and yet they still won’t bring the bill [to the House Floor.]

“So, I raised this question to the Majority Leader. I know, Leader McCarthy raises to Speaker Pelosi, and they’re now saying they may bring it this week, but this should have been done weeks ago. Again, over a month ago. It came over from the Senate unanimously. This could pass overwhelmingly if they put it on the calendar. I don’t know why they’re delaying it, but the Supreme Court Justices are still under threat.

“Why [isn’t] the Justice Department, by the way, enforcing federal law that says you can’t go and try to intimidate and threaten Supreme Court Justices in front of their homes? Any kind of federal [judge is] not by law allowed to be threatened that way and yet the Justice Department won’t take action. They need to. This is a real concern.”

“It’s very alarming. Again, this is a bill that could have been put on what we call the suspension calendar, meaning it would have passed overwhelmingly with Republicans and Democrats a month ago. What are they waiting for?

“We’ve already seen that there are evil people that are out there that could have done something really bad last week, and there’s no reason for it. The bill needs to pass and the Justice Department needs to enforce current law.”

On the Senate Democrats and Republicans and reaching a deal on gun legislation:

“Well, first of all, and as you describe it, we’ve been hearing some of that, but we haven’t seen any of the details, and of course, on something this sensitive, the details really do matter. And so, we’ve got to see the details.

“We do know this, last week, we brought legislation on the House Floor, by the way, which would’ve done a lot of those things, especially hardening schools, more mental health counselors in schools. [Congressman] Hudson’s bill was voted on last week, and Democrats denied us the ability to pass that version.”

On the need to see the legislative text of the Senate’s gun bill:

“Well, I’m glad that they’re moving further away from any kind of gun control that would take away the rights of law-abiding citizens. That is always where you see the far-left go. [President] Biden himself was talking about going after handguns. And so, you know, that’s the real concern. I want to see the details. The details will matter here.”

On the five-year anniversary of the congressional baseball shooting:

“Look, my first thoughts are always with the heroes and the miracles. I mean, I shouldn’t be alive today by most standards if you look at what happened and how that day ended up. But, it was because of heroes you know, David Bailey and Crystal Griner with Capitol Police who saved all of us. [Congressman] Wenstrup, my colleague from Ohio who’s a medical doctor, who immediately came and provided life-saving surgery, I wouldn’t have even made it to the hospital. And then, of course, all the teams of surgeons – there were a lot of surgeries I went through.

“But look, God was on that ballfield that day. There were miracles that no one can explain except that God was there protecting us, and I thank God every day that He was there to look out for all of us.”

“Look, I’m just thankful for the things that I have. And [there’s] not a day I don’t wake up where I don’t thank God that I’m alive and get to do the things I love doing and spend time with my family. So, I never take that for granted. I know every time it’s easy for people to take the simple things in life for granted. Don’t ever do that because you don’t know how long it’s going to last.

“But, you know, I’m still doing physical therapy once a week. Still have things I want to work on. I can’t run yet. And I’m working on trying to run again. You know, Steve Doocy was out there on the ballfield with me a year after the shooting, and I could hardly move in that game, but I’m able to move around a lot better. So, I keep getting better, keep focusing on getting better, and just thankful to be alive.”

On the outpouring of support Whip Scalise received after the shooting:

“If you wonder if God can perform miracles, look at that. I mean, I couldn’t even move, and yet I was able to catch the ball that came over to second base. I was on the ground because I couldn’t get up, and yet I made the throw to first base. You know, God was there. Just saying look, ‘I’m still in charge. Let’s have a little fun with it.’ And, and it was a magic moment like so many others I’ve had. So lucky to be alive.

“By the way, this is also President Trump’s birthday. He and Melania came to the hospital that night, you know, kind of cut his birthday short to go and help console my wife that night, and that was just such a warm moment. And he continued to call on me when I was in the hospital just to check on me to see how I was doing. And so many other people did.

“You saw a lot of warmth and love. [There were] strangers across the country praying. There [are] still great people in America. We always seem to focus on the evil people. I got to see so much good in people who just didn’t even know me – [they] just cared that somebody tried to take out somebody because of their political views. And that’s not who America is. And there were just so many great people who said, ‘We’re praying for you and we want you to get better,’ and I use that strength for those prayers to get better.”