WASHINGTON, D.C.—House Republican Whip Steve Scalise (R-La.) joined Fox News Channel’s Fox and Friends to expose the devastating toll the COVID-19 pandemic has taken on nursing home residents due to the reckless decisions by several Democrat governors across the country.

Scalise is demanding answers for our nation’s seniors and their families who have experienced tragedy due to these preventable nursing home policy failures, and calling on these governors to take responsibility for their failures to protect our most vulnerable. 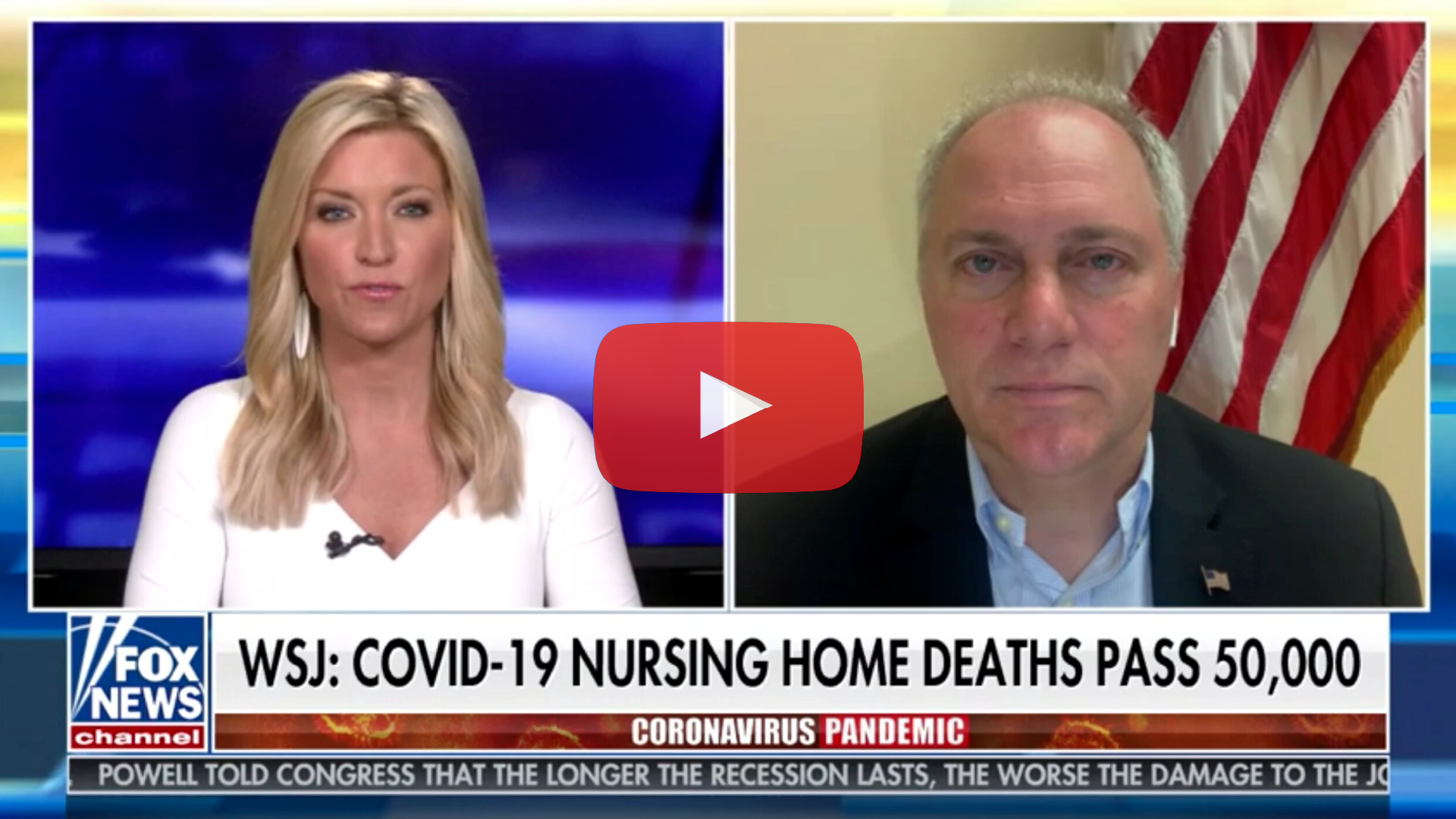 On demanding answers from Democrat governors regarding nursing home tragedies:

“Well, Ainsley, we’re still trying to get more information, but look, I mean, 40 percent of all the nursing home deaths in America came down to five states who violated and contradicted the CMS guidelines that were out, that were very clear, that told states how to properly handle nursing home patients who are COVID positive. And look, most of those states, 45 of those states followed the guidelines, Republican and Democrat governors alike, but five states for whatever reason chose to go a different direction, a dangerous and a deadly direction that ended up killing thousands of nursing home patients unnecessarily.

“We’ve been calling for answers. You know, why did they give those orders? Why did they go against the safety guidelines that were issued from CMS, and why won’t they give us all the disclosure of the patient information that they were giving and then all of a sudden when we started discovering this, they clammed up and they’re not letting the public see what these numbers really are?”

“We knew [the danger] back in March. CMS was issuing guidelines saying, look, if you’re a nursing home, let’s say you send a patient to a hospital and they get tested positive, you can’t bring them back into the [nursing home] unless you have an ability to isolate them and properly take care of them.

“And look, 80 percent of the nursing homes in America got this right. 45 of the states in this country got this right, but five states decided they’re going to do their own thing. And they forced the nursing homes to take back the patients. In fact, in New York what the governor issued and ordered, he prohibited the nursing homes from even testing COVID-positive patients. He said, ‘You can’t even test them, you have to take them back even if you don’t have the ability to isolate them.’ And, Ainsley, this turned out to be a death sentence for thousands of seniors in each of these states’ nursing homes. It was heartbreaking to see it happen. I’ve asked the governors to come testify and explain why they did this and also to give us the data that they have. They just stopped reporting it to the public.”

On fighting for answers for our nation’s most vulnerable citizens and their families:

“I’ve heard from so many families throughout this in these last few weeks as we’ve been exposing this. I’ve heard from families in so many of these states who appreciate that at least somebody’s looking into it, but they’re sharing heartbreaking stories. I mean, just heartbreaking stories of their loved ones dying in the nursing homes, spreading this to other seniors in the nursing homes at the worst place you could spread COVID. Over 40 percent of all COVID deaths in America happened in nursing homes. That represents less than 1 percent of our country’s population, over 40 percent of the deaths, and so many of these deaths should not have happened.”