Whip Scalise also criticized Democrats for withholding the articles of impeachment from the Senate after months of claiming that impeachment was an “urgent” matter. The Whippointed out that Speaker Pelosi’s calls for fairness in the Senate rang hollow after theunprecedentedly partisan and unfair treatment of House Republicans and the Trump Administration in impeachment proceedings. 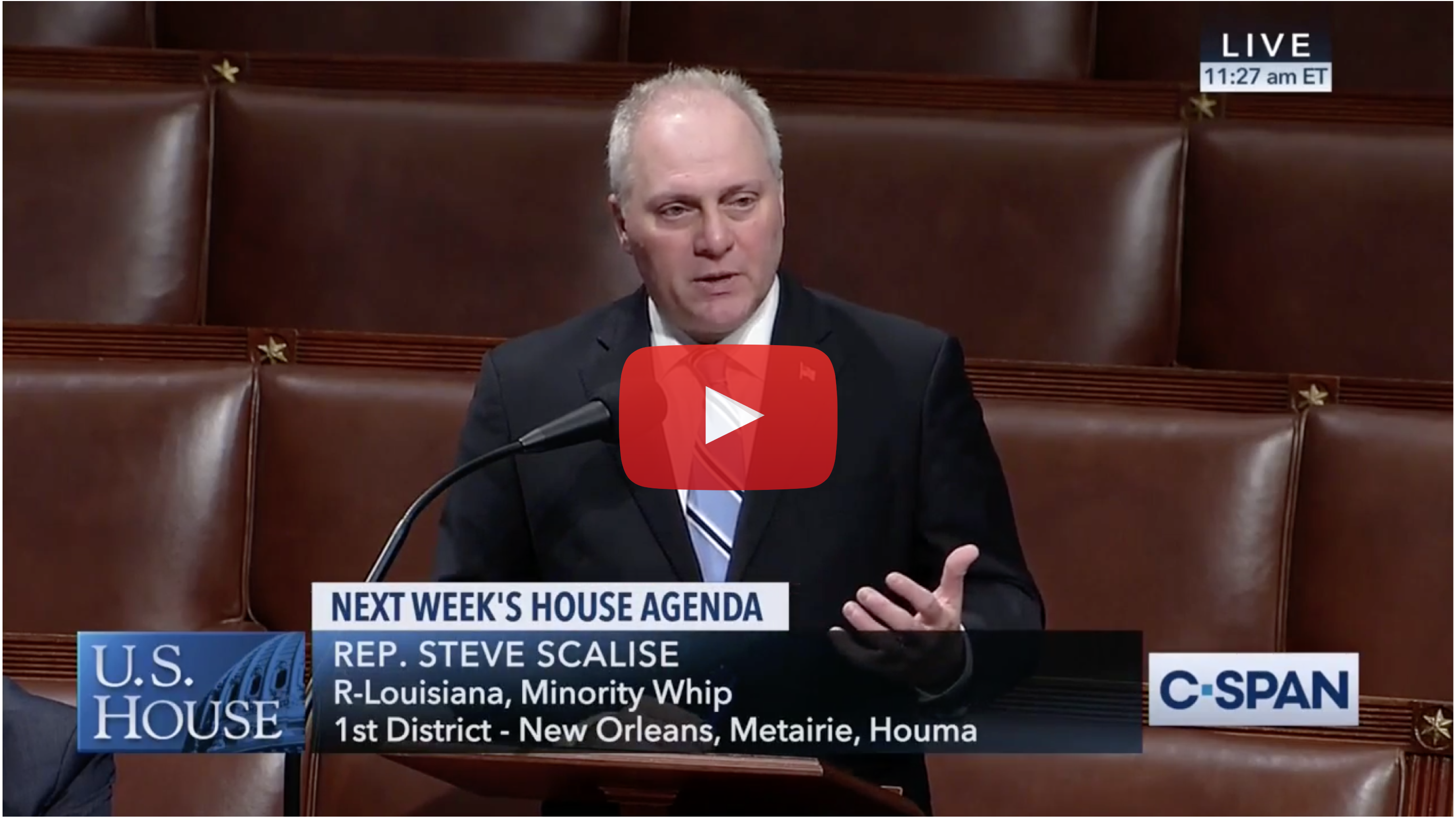 Click here or on the image above to watch the clip.
“We’ve had a robust debate for years in this House on whether or not to modify, make changes to the 2002 AUMF, it’s been a constant debate. There’s been the lack of an ability to form consensus. But clearly on both sides, and I know [Leader Hoyer] is aware there’s a number of members on our side that have brought this issue up before, as well as on your side.

“I was disappointed that yesterday, in a time of crisis, where we literally are in the middle of a crisis – we had just taken out one of the worst terrorists, most brutal terrorists, that we’ve seen in Soleimani. I haven’t seen a lot of disagreement that he was a brutal terrorist, theObama administration designated him as a terrorist, the head of a terrorist organization. He was in violation of international law that prohibited him from being in Iraq. Instead of having a conversation separate from that on actual changes to the AUMF, if that is where your majority would like to go.

“And clearly, again on our side, there were people that were interested in having that debate. It was disappointing that instead we went into what turned out to be more an effort to just take a cheap shot at the [Trump Administration] by bringing a resolution that had absolutely no effect of law. If the AUMF is going to be changed, it has to be an act ofCongress. I know the [Leader Hoyer] is aware of that. On our side we’re aware of that too. And instead of trying to engage in that kind of conversation, debate, negotiation – instead, it was just a resolution that everyone recognizes would not have made any changes to theAUMF. And so why, during that time that we’re in right now, was that the path to go as opposed to trying to have a sincere debate on whether or not real changes to the AUMF should take place?”

On President Trump taking decisive action to save American lives: 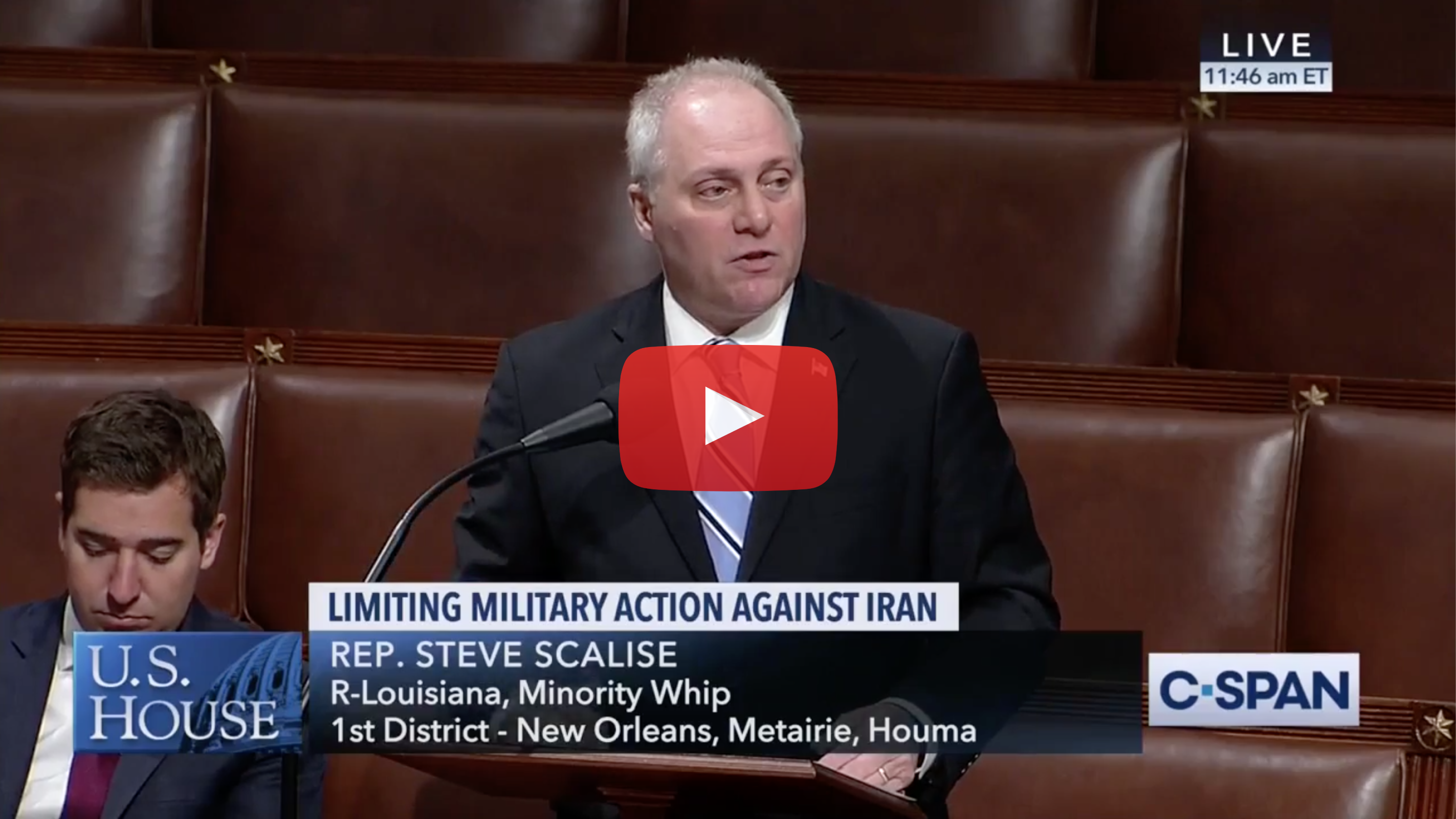 Click here or on the image above to watch the clip.
“First of all, to start with the President’s, not just authority, but it’s the President’s responsibility under the Constitution as our Commander in Chief to keep this country safe. President Trump has made it very clear that he is going to protect this country from terrorists or people who want to do us harm domestically or abroad. In the case of Soleimani, there was a red line issued a long time ago.

“And I know in the past, previous administrations have issued red lines and then let those lines be blown through without taking any action. And I would argue that that makes our country less safe when people don’t think that we’re going to back up our words with actions, as not just the greatest military force in the world, but the greatest defender of freedom throughout the world. Anyone who seeks freedom, including people in Iran who seek freedom today from this oppressive regime, they have one place they can look to, and that is the United States of America. That’s what makes us such a great nation, is that we don’t shed our blood to conquer more land. We shed our blood to keep people safe, not just here in America, but to provide freedom all around the world to anyone who seeks it. And so, the fact that President Trump maintained a red line that was crossed is something we all should applaud.

“And I would say this, you can go back to when President Obama was in office, and Osama bin Laden had been the number-one target of this country since the September 11th attacks. And President Obama made the decision, it was his call to take out bin Laden when they thought, they weren’t positive, but they thought they might have a real intelligence understanding of where he was. And the President made that call. We had a lot of disagreements with President Obama during that time on policy, but we applauded that decision. We united behind that decision because it was the right thing to do to take out a terrorist who had been a major threat to our country. By the same token, I understand that your side has a lot of differences with the President, I just wish in a time like that when everyone acknowledges how brutal of a terrorist he was, and he crossed a red line, he was in Iraq plotting to kill more Americans. We don’t have to wonder if he was going to do it, because he had a decades-long history of killing Americans. The blood of hundreds of our men and women in uniform were on his hands and no one disputes it. And so, he’s taken out by a call that I think is the right call by our President to take him out in Iraq which the2002 AUMF gives him the authority to do.”

On Democrats’ shameful criticism of the successful mission to take out one of theworld’s leading terrorists: 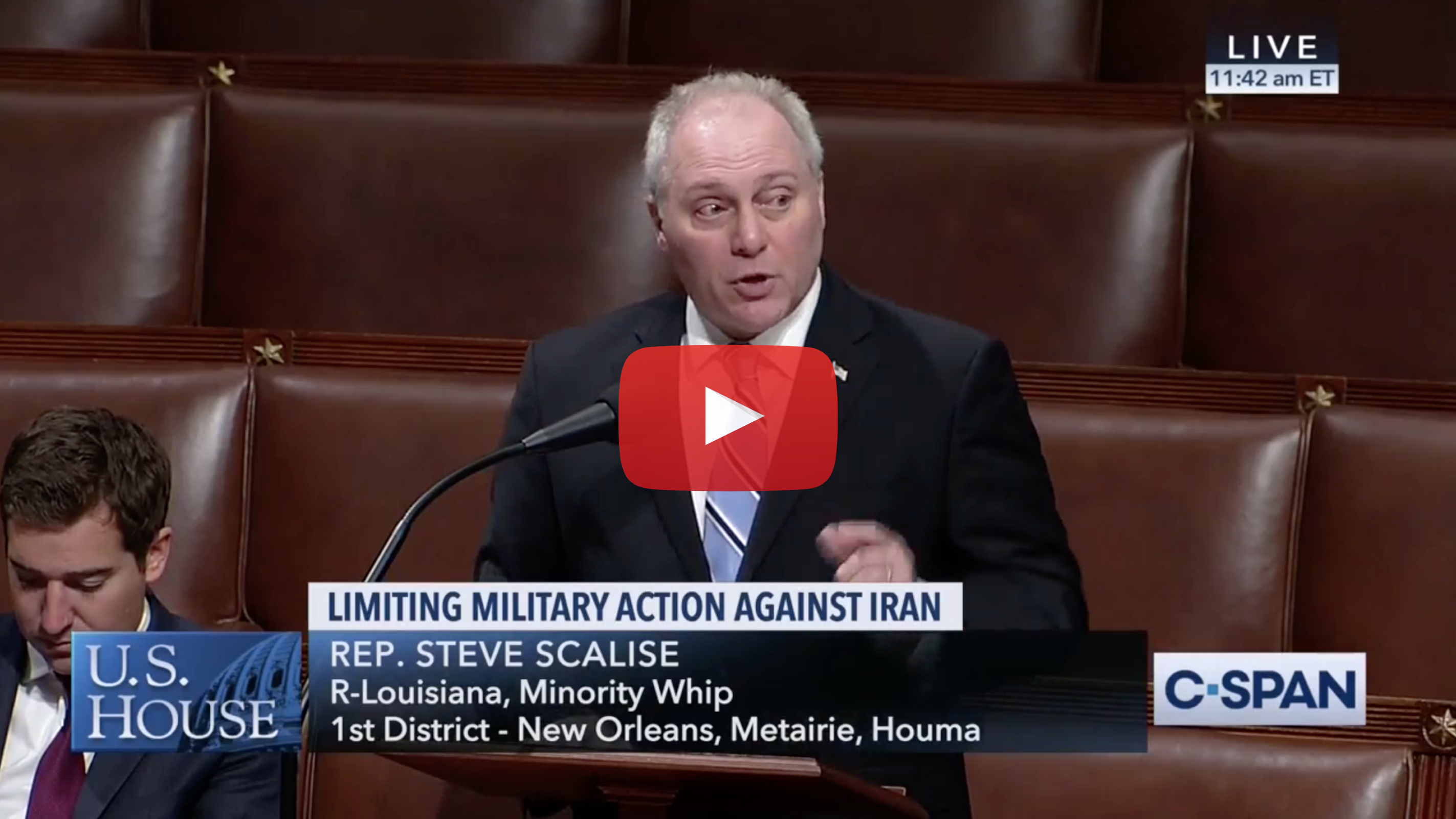 Click here or on the image above to watch the clip.
“I’m glad that Soleimani is no longer on this planet plotting to kill more Americans, which is what he was doing illegally in Iraq. And that ultimately is something that we can debate, but a lot of us felt it was inappropriate to be bringing a resolution, not to change the War Powers Act, not to have this serious discussion about whether or not the 2002 AUMF should still be in place as it was – but to just take a cheap political shot at the President in the middle of this. There was a presidential candidate, just yesterday, Democrat presidential candidate, a major candidate for president, who said, ‘Innocent civilians are now dead because they were caught in the middle of an unnecessary and unwarranted military tit-for-tat.’ So, in essence, equating the killing of one of the most brutal terrorists who killed hundreds of Americans and plotting to kill more, equating that to Iran shooting down an airplane. And another 176 people dead because of Iran’s actions. The two of those are not on the same level. Those kinds of comments are unnecessary as well. I’m not sure what is unwarranted about taking out Soleimani, if that’s what he’s suggesting, and others have suggested it too.”
On Speaker Pelosi’s absurd impeachment demands: 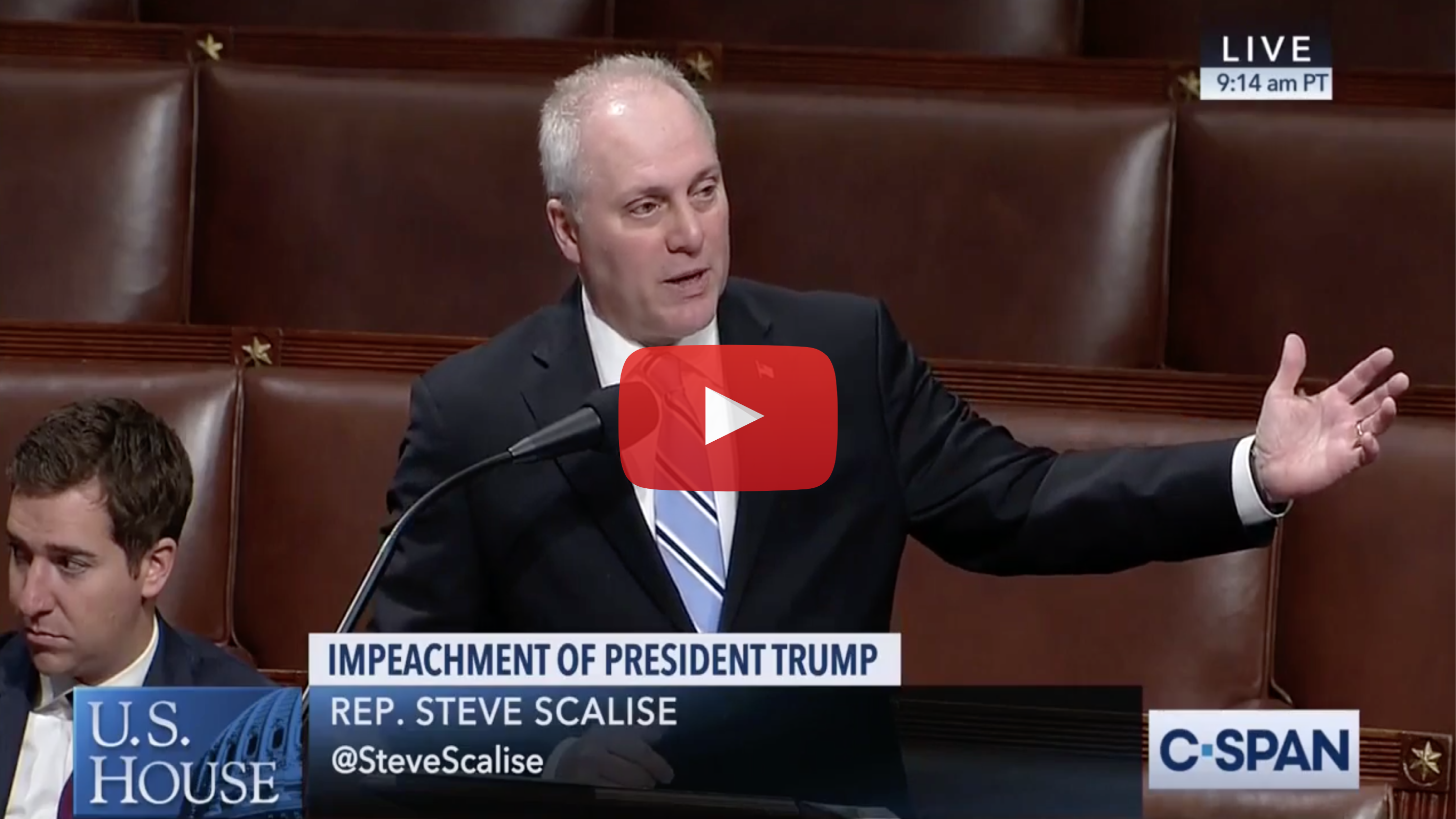 Click here or on the image above to watch the clip.
“Clearly, as [Leader Hoyer] knows, it’s the Senate’s job to try the House’s case. If theHouse failed to make its case, that’s the House’s fault. To suggest that the Senate needs to mop up the mess that was done here because there was not fairness, because both sides didn’t get the opportunity, if one side just wants to say, ‘Hey, I’ve got a case to make. I’m going to go make my case, but I’m not going to let them make theirs. I’m not going to let them call their witnesses.’ And we had a long list of witnesses we wanted to call that we were denied. And you’re in the majority, you get to make the rules and okay, if that’s what you want to call fair, you can but it’s not. And so, the Senate has it, but it was all done according to the majority out of urgency. That’s the word we heard over and over again. If the gentleman wanted to have other people come and testify, the President and every President’s exerted executive privilege. And so, if the standard is a President exerting executive privilege equates to obstruction of Congress, then you’d have to retroactively go back and impeach every President including George Washington. Exerting executive privilege is not an obstruction of Congress.

“Congress can have a disagreement with the President. We’ve surely had disagreements with previous Presidents exerting executive privilege when we were in the majority. Guess what, you fight those out in the courts. [Leader Hoyer] is well aware of that. And maybe the courts will say yes, maybe the courts will say no, but that attempt wasn’t made. Why? Because according to your own leaders: Speaker Pelosi, ‘Urgent.’ Chairman Schiff, ‘The timing is driven by the urgency.’ Chairman Nadler, ‘The threat is urgent.’ And so, they rammed through and other facts, other witnesses that they didn’t want they discarded. Actual rule of the House, Clause 2(j)1 of Rule 11 requires, not allows, but requires the minority to have a day of hearing. That was denied because there was urgency. They didn’t want all the facts to get out, they were concerned about urgency. And then lo and behold, it passes and all of a sudden what happened to the urgency?

“The Speaker says, well, we’re going to hold the papers. You had Democrat Senators, ‘I think it’s time to send the impeachment to the Senate, let Mitch McConnell be responsible for the fairness of the trial, he ultimately is.’ Other Senators said very similar things. But at some point in time, if it was urgent and then it happened, and then you don’t send it over because now all of a sudden you realize there’s a weak case and you’re hoping something else pops up. You’re hoping maybe the Senate can do the things that weren’t done here because it was an urgency. It was expediency, appeasing a political base.

“There was no crime. Every other impeachment started with a crime, not the hope of a crime. You can listen to a phone call and suggest something. Interestingly, I never saw any attempt to impeach President Obama because he didn’t give that aid to Ukraine. If the aid was so important that it was impeachable not to give it, Obama didn’t give it. We didn’t try to impeach him. It was bad foreign policy that he didn’t provide Javelin missiles to Ukraine. It wasn’t impeachable. But President Trump did give the aid, President Trump did sell theJavelin missiles to help Ukraine stand up to Putin. President Obama didn’t help Ukraine stand up to Putin if that’s who you’re most concerned about.”