Whip Scalise emphasized the stark contrast between House Republicans who have consistently been focused on working alongside President Trump to deliver real wins for hardworking American families compared to Speaker Pelosi and her failed Democrat majority who are abusing their power to undermine President Trump and American voters. 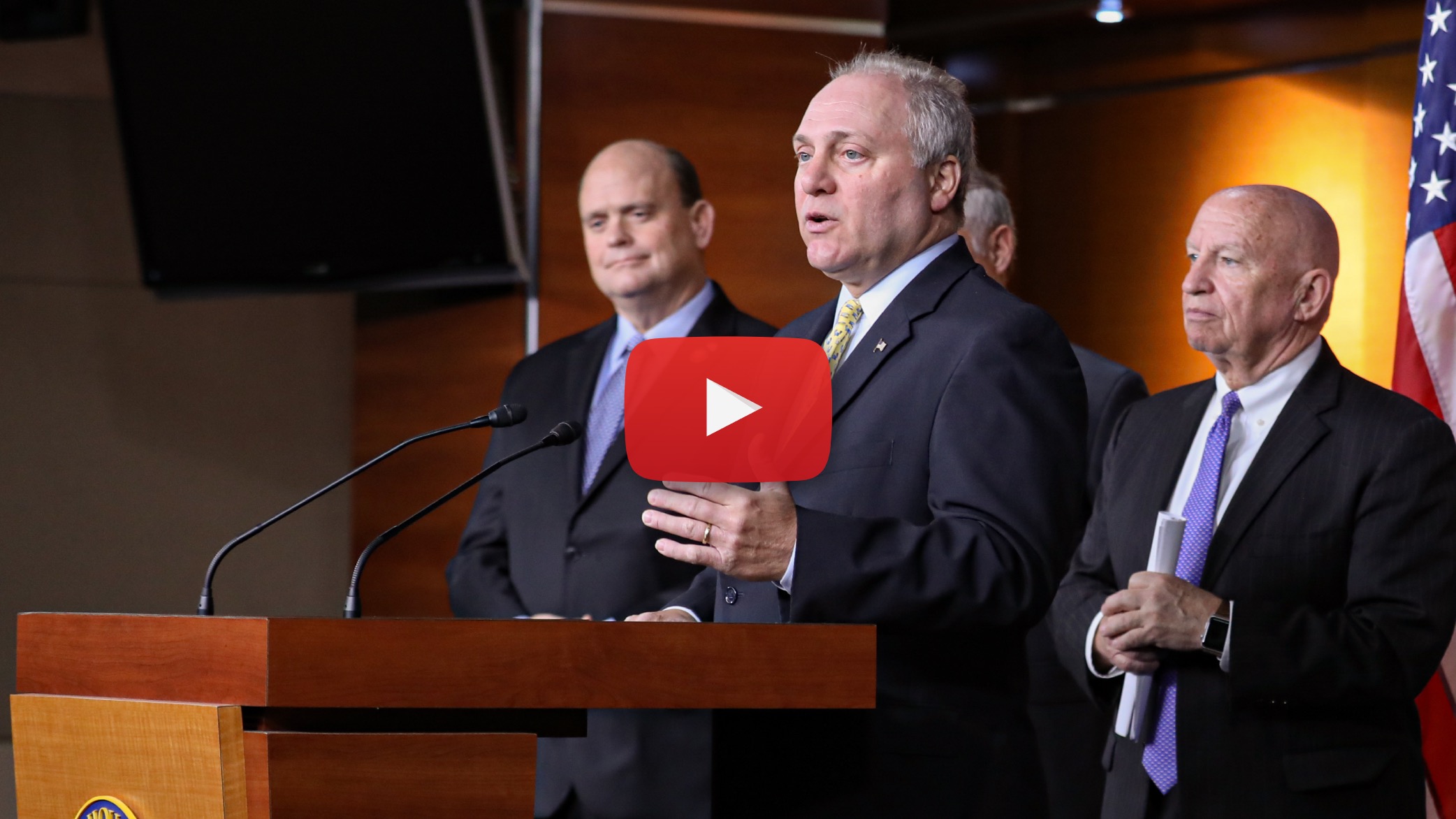 On Pelosi finally agreeing to bring USMCA to the Floor, after nearly a year of delays:

“There’s a lot we’re working on. As House Republicans, we’re working to fight for American families to help improve their lives, help lower drug costs, help address some of the problems that they’re confronting. And it’s an unfortunate, very disappointing contrast with what you’re seeing Speaker Pelosi do with her majority. And let’s start first with USMCA, because this is something that we’ve been working on since President Trump took office, when he said that he would make NAFTA better for American families, that he would actually go and negotiate a better trade deal with Mexico and Canada to open up more opportunities. Right now, a lot of products that we make in America, we can’t sell in Canada, we can’t sell in Mexico, and under the USMCA, we open those doors up and we create more jobs. Over 160,000 more jobs for American workers. Higher wages for American workers, and the ability to sell our products.

“But even more than that, what it does is sends a message to the rest of the world. There are a lot of friends of ours around the world. You see it with Japan, you see it with the United Kingdom, so many other countries want to have better trade relationships with the United States. But until USMCA can get done, they don’t believe that they can actually go and negotiate a deal with America until they see that we can actually get the agreement with our neighbors from the North and the South put into law.

“So, the fact that we’re going to finally get a vote on USMCA is a big win for those American workers. But also, then it sends a message to China, and everybody knows, not just in America, but all of our friends around the world that know that China doesn’t play by the same rules and that they have to come into line with the rest of the world. And they haven’t needed to because nobody stood up to them until President Trump finally stood up for America, but also for our allies all around the world by saying China is going to have to play by those same rules. And getting USMCA passed also sends that message to China, that if they want to be a part of the greatest and hottest economy in the world, which is the United States economy, they’re going to have to play by those rules too.

“So, getting USMCA moved through has been a top priority of ours. I set up a Whip team just specifically for USMCA. This morning, Chairman Brady and myself hosted a call with Ambassador Lighthizer where he laid out those details and we talked about how important it is for American workers, for the President, to get this done, and hopefully it gets done quickly.”

On Pelosi refusing to bring a bipartisan drug pricing bill to the Floor:

“It should have done a long time ago, but again, as we’ve seen with Speaker Pelosi, instead of using her majority to focus on things like lowering drug prices – which [Republicans] have got a great bill, H.R. 19, that would lower drug prices, that only includes bipartisan legislation – not a partisan approach, something that can’t get signed into law – but ideas that actually bring Republicans and Democrats together.

“We’ve worked on this incredibly hard for months, to get an agreement between Republicans and Democrats to lower drug prices, something that can get signed into law by the President. Something that would actually work for families. Families that expect Congress to work for them, families that are struggling with the high cost of drug prices, and they know that there’s a better approach and we bring those approaches in H.R. 19, a really important piece of legislation that I hope Speaker Pelosi would bring to the Floor instead of the partisan approaches that she’s been taking. And finally, when you look at what she really has done with this majority. That is from day one, when she became Speaker, she made it very clear that the most radical elements of her base who didn’t want to work with this President, but they wanted to overturn the results of the 2016 election, and so they were committed to impeaching him, regardless of the facts. That’s been going on from day one that Speaker Pelosi took that gavel, and today, unfortunately, she bowed down to the most radical elements of her base instead of standing up to them and saying that she was going to work for the American people.”

On Democrats’ bringing baseless impeachment articles to the Floor:

“By bringing articles of impeachment, after years of investigations, with the Mueller investigation being the linchpin, what they thought was going to be the thing that delivered something to impeach the President on, and it didn’t. There was no violation. The only collusion that happened where Russia tried to interfere with our election, was when Barack Obama was President. That’s when Russia tried to interfere with our election. Why Barack Obama and Joe Biden aren’t being asked why they didn’t stand up to Russia and stop them from interfering in our election is a really good question that’s not being asked.

“But President Trump has stood up to Russia on so many accounts. President Trump stood up to Russia with our ally Ukraine, and still is standing with Ukraine against Russia. When he sold the Javelin missiles that President’s Zelensky, on that now infamous call, thanked President Trump for doing. Giving Ukraine the tools that they need to stand up against Russia. All the times that the Democrats brought witness after witness that were supposed to be the star witness, they were asked by our Members point blank, ‘can you name an impeachable offense?’ Not one. ‘Can you name any kind of bribery?’ Not one. Yet they still go forward with impeachment, not because there’s evidence – which is what the constitutional standard should be – but because they’re afraid he will get reelected. And time after time, you’ve heard Democrats in this House say exactly that. They’re not impeaching the President because they can list an impeachable offense, they’re impeaching him because they’re afraid he will get reelected. That’s not why you have the power of impeachment, that’s the abuse of power.”

On House Democrats’ abuse of power during this sham impeachment process:

“Speaker Pelosi, Adam Schiff, and her counterparts have been abusing the power of impeachment because they’re afraid Donald Trump will get reelected on his own. The American people should be the ones that decide who the President is. Not Nancy Pelosi or Adam Schiff, because they disagree with the results of the 2016 election. It’s going to be a low mark in Congress when you see what they’ve done to the standard of impeachment. Turning it instead of what it’s always been, is a unique power of Congress to hold the President accountable if they violate the law, and instead now using it against a President because they’re afraid he will get reelected on his own. That’s something that she’s ultimately going to have to account for.

“Again, you’ve seen a lot of her own colleagues trying to find an offramp, trying to say let’s get away from impeachment, but she couldn’t stand up to the most radical elements of her conference. And make no mistake, they wouldn’t be talking about this if they felt confident in their field of candidates. More and more Democrats are talking about getting in the race for President to this day. But ultimately, they ought to trust the American people with the election and not still try to reverse the results of the last election. That’s what impeachment was supposed to be for, but not an impeachable offense and keep in mind, Zelensky never did the investigation and got the money. Zelensky himself said there was no pressure applied and that’s the basis for them impeaching a President.

“I think people know what’s really going on here, they know this is all about politics, and they’ve seen the abuse of power. Last week, Adam Schiff, spying on members of the press. Subpoenaing phone records of journalists, we don’t know how many. I asked [Majority Leader Steny Hoyer] at the colloquy last week, can you tell me how many journalists Adam Schiff was spying on? He couldn’t answer that. How many Members of Congress is he spying on, or other citizens across this country? And they can’t even answer a basic question like that. We all should be alarmed at how they’ve abused their power with this majority in Congress. And it’s a shame, because there’s a lot more we should be doing that families across this country are counting on us to do – like lower drug prices. At least, as House Republicans, we’re going to stay focused on fighting hard for those families across America who are counting on us and working with President Trump to go deliver more wins for American workers in the American economy.”