WASHINGTON, D.C.—House Republican Whip Steve Scalise (R-La.) joined Fox News Channel’s Fox & Friends today on the three year anniversary of the Congressional Baseball Game shooting to reflect on how the brave U.S. Capitol Police and Alexandria Police Department officers saved both his life and the lives of several others Members of Congress that day on the ball field. Whip Scalise emphasized that Congress must work together to ensure equal justice for all, while also recognizing the incredible sacrifices of law enforcement officers who uphold their oath to serve and risk their lives every day to protect American citizens. 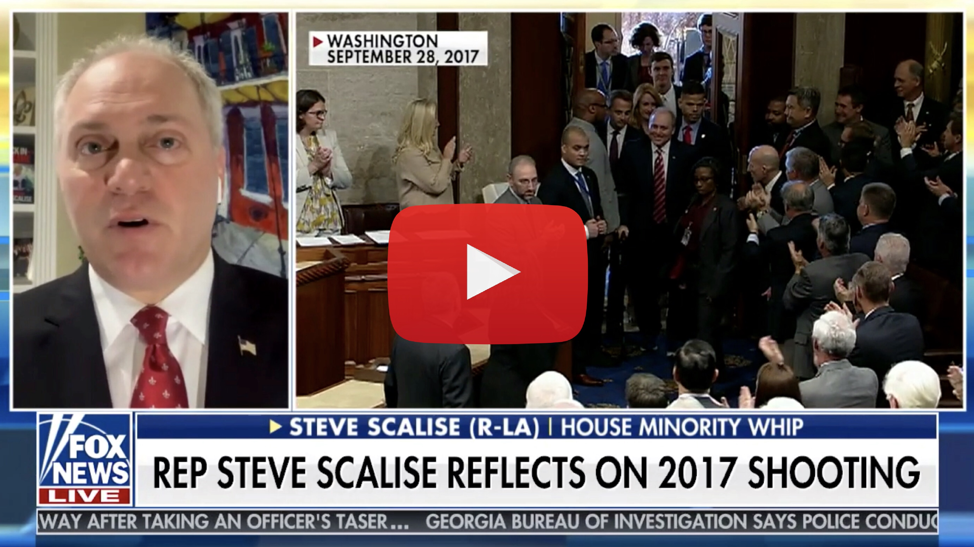 On the 2017 Congressional baseball practice shooting:

“Well first, I’m lucky to be alive. I know that, and I felt the prayers. It was just unbelievable the outpouring of love and support from people all around and it just lifted me up, it lifted my family up in an incredibly difficult time because as you said, we didn’t know if I was going to make it through that first night, let alone how I was going to recover or if I’d even be able to walk again. And so, you know, a lot of miracles, a lot of heroes as well that day and you know, God’s been good to me.”

On the defund the police movement:

“It really misses the mark of what we need to do to be making reform, to continue to fight for equality and justice while at the same time recognizing that every day there are police officers who save lives, who ran into the fire in 9/11, who do the heroic things. I wouldn’t be here if it wasn’t for the best of what policing is and as you mentioned, the United States Capitol Police, David Bailey and Crystal Griner are the epitome of what law enforcement officers around this country are like, and the heroism that they display. And they saved over a dozen lives that day in their heroic actions. And you see that play out, obviously if there are bad apples you’ve got to root out the bad apples but recognizing that by and large the lion’s share of police officers in this country put on their badge every day and risk their lives to protect us in our communities.”

On the need for bipartisan police reform legislation:

“Look, this shouldn’t be something that only one party participates in. I’m glad [Senator Tim Scott] has actually taken this leadership role prior to George Floyd. This is something that he’s been passionate about. I spoke to Tim again a few days ago and we’ve been working with a lot of Members of Congress, and there’s Republicans and Democrats trying to come together to get to a place where we can actually see real reform. This shouldn’t be a moment where one party just says you know, we’re going to keep politicizing it and then nothing gets done. That’s happened too many times. We have a moment where we can actually make reforms. And look, you know, whether a white person, an African American person walks out of their door, going to school, whatever they’re doing, if they have an encounter with police it should end the same way, and if it doesn’t that’s something we have to look at, and we have to see how we can address it. And there are a lot of ideas that have been talked about that have support of people across the spectrum. We ought to be doing that, again, not making it a divisive debate, it shouldn’t be a divisive debate. I think after George Floyd you saw everybody come together and say, ‘That was wrong and bad cops need to be held accountable like anybody else.’”