Whip Scalise blasted Speaker Pelosi for the anti-democratic course of action she’s taken on this impeachment sham. From the beginning, Speaker Pelosi and her liberal lieutenants have denied President Trump his rights, broken House rules to push their phony narrative, and tried to undo an election because the radical Democrat base can’t accept the results.

It’s disappointing to see what the Democrat party has become. 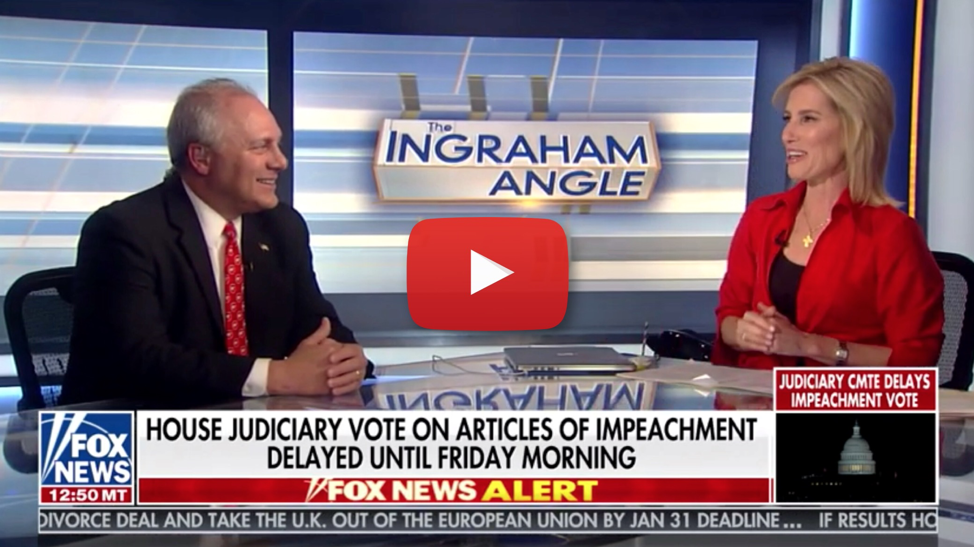 On Democrats bringing disastrous articles of impeachment to the House Floor:

“It’s sad to see what [the Democratic] party has become and look, the socialist movement has taken over on the Democrat side. There are no moderates. There’s surely no liberals even. It’s a socialist party and you’re seeing it play out. And so, with these articles of impeachment, there’s no case. The President didn’t break any laws. In fact, the President actually helped Ukraine. Barack Obama didn’t help Ukraine. He didn’t sell the Javelins.”

“It’s a farce. It’s a sham. [Democrats] are losing in the court of public opinion miserably. There are Democrats right now who want to vote no [on impeachment] who can’t, because they know [Rep. Alexandria Ocasio-Cortez] is going to primary them, so they’re going to vote yes.

“There is nothing to impeach this President on. I think it’s played out incredibly well. President Trump has stayed focused on getting the economy back on track. This is going to be a disaster for them next week.”

On Dems using impeachment as a purely political exercise:

“There is nothing to impeach this President on. Number one, and you know this, they are upset that he won the 2016 election. And two, they are scared to death that he’s going to win the 2020 election because he’s done everything he promised. The economy is back on track. We’re creating more jobs. We’re going to get the USMCA trade deal.

“And so, look at their opponents. They’ve got a bunch of socialists competing against each other and the country has tuned them out. So, [Democrats] are in a free fall as a party. And so, their answer is to impeach the President.

“They ought to go and figure out how to rebuild their party as opposed to how to destroy our democracy.”