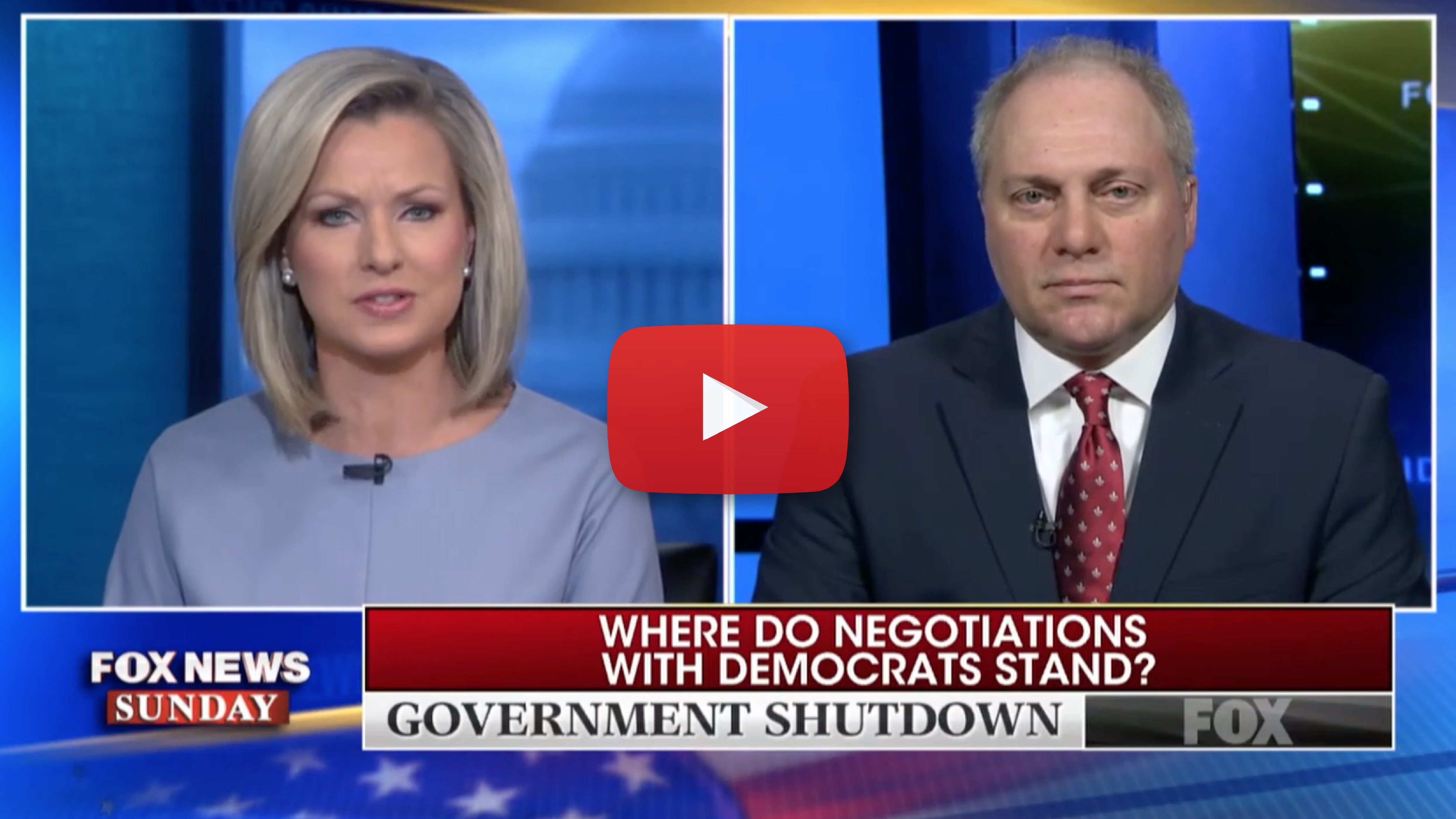 Click here or on the image above to watch the interview.
On Senate Democrats’ failure to negotiate border funding with President Trump:

“Frankly, [the shutdown] can end today if Chuck Schumer and Nancy Pelosi agree with the President on the bill that we passed out of the House just a few days ago. That bill is still over in the Senate. It’s ready to be taken up. And, look, if the Senate has a different way and a better way to approach border security, they ought to put that plan on the table.

“Chuck Schumer was for this in 2006. I’d be curious to know what changed. Is it just that Donald Trump is the one now requesting it?

“So, this can be solved today if they just come to the table and say, ‘Here’s our plan to keep the country safe.'”

On the reason securing the border is crucial to keeping America safe:

“I don’t think it’s as much that the two sides are far apart. It’s that you’ve got one side that refuses to negotiate because they are so afraid of the radical left base that wants open borders. A lot of them campaigned on abolishing ICE.

“And just think about this, Sandra—last year alone, ICE agents, these border agents that are protecting the interior of our country saved more than 900 children from sexual assault and human trafficking. That stuff is actually happening at the border. We are stopping a lot of it, but we are surely not stopping all of it.

“How many of them are getting through that we don’t stop everyday?”

On Chuck Schumer’s lack of a proposal to fund the government and protect America:

“There’s a lot of different items that relate to border security that we can negotiate about, but let’s first recognize this is about securing our border. The President has been very clear about what he wants to do to keep America safe and he campaigned on it. He was elected on this.

“Again, if there’s a better way that Chuck Schumer can put a plan on the table to keep this country safe, I want to see it. If he’s OK, by the way, with those thousands of criminals that we stop every year, how many thousands do we not stop because we don’t have a secure border? That’s what this fight is about. Is he OK with those people coming across illegally who are criminals? In this caravan, there’s over 600 criminals.”

On passing common sense reforms that allow for a more secure and cost-effective border wall:

“…Chuck Schumer was for a wall before it was Donald Trump asking for the wall. So, if he removed the personality from it, let’s get to what it’s going to take to secure the border.

“And I’ll give you one example, Sandra. In law today, there are prohibitions that stop the president from building the wall in certain areas where, frankly, we have the most porous parts of our border. We need to remove those legal limitations.

“There’s also limitations that stop him from building the wall in certain ways. There are cheaper and more cost-effective ways of building a wall and the President can’t do that today because the law blocks him. How stupid is that?

“The law actually says if there’s a lower cost and more effective way of securing the border the President is legally prevented from doing that. In our bill we passed just a few days ago, we removed those legal limitations so the President can keep this country safe in the best and most cost-effective way possible.”

On the need for the Senate to take up the House-passed funding bill that includes $5 billion for border security:

“Well, [President Trump] had that sit-down meeting at the White House where [Nancy Pelosi and Chuck Schumer] were adamant that they didn’t want to do anything that he wanted to secure the border. So, the bottom line is there is an offer on the table in the form of an actual bill that can get to his desk.

“We passed it out of the House. It’s still in the Senate. Up until January 2nd that bill is still live and active. Let the Senate go in and start negotiating and actually pass something out of the Senate that secures this border and gives the President the tools he needs to keep America safe.”

On his priorities in the new Congress:

“I’d like to see us continue to build on the economic success we’ve had. Look, hardworking families all across this country are seeing the best economy they’ve seen in generations. Anybody who’s looking for a job right now has multiple opportunities to go and find a job. That’s really positive. I want to see us build on that and allow families to have even more security.

“Let’s focus on also getting our fiscal house in order. We helped rebuild our military working with this President last year, and as Kellyanne just talked about, our troops are about to get an important, well-earned pay raise. Now, let’s focus on actually getting our budget balanced again. And let’s talk about infrastructure.

“There are a lot of other issues we can work on in the New Year, but Democrats have to be willing to work with this President. You’ve seen a lot of focus on what they’re going to do in terms of what the president calls presidential harassment. That’s not what this country wants. They didn’t campaign to get the majority, by the way, on talking about those issues. Let’s focus on getting this economy growing even better and it’s doing great right now. Let’s keep building on the success.”