WASHINGTON, D.C.—House Republican Whip Steve Scalise (R-La.) joined Fox News Channel’s Hannity to discuss Democrats’ failure to make a credible case for impeachment. Whip Scalise emphasized how none of their “star witnesses” or “bombshell” leaks can change the fact that President Trump did not commit a crime.

Whip Scalise called on Speaker Pelosi to start doing her job instead of tearing our country apart. It’s time to end this impeachment charade and get back to work for the American people. 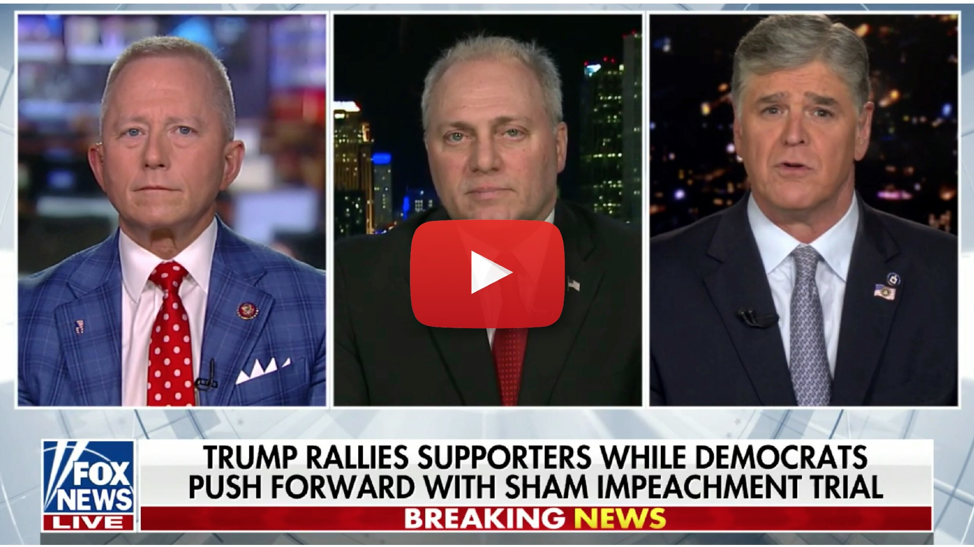 On Democrats’ failure to make their case for impeachment:

“Sean, if you look, and of course, that tape that came out from John Bolton last year where he literally said in relation to both Zelensky phone calls, [he said] they were ‘Very warm and cordial.’ Those were Bolton’s words on video, ‘Warm and cordial.’ That’s the newest Democrat star witness, like every other witness they have. Look, and it was pointed out, 18 different witnesses already testified. Not one laid out a crime, not one of them.

“And then Jay Sekulow, I thought had the mic drop moment, when he looked over at Adam Schiff sitting there on the Senate Floor today and he said, ‘Over 30 times, you said that you made your case,’ and literally, you know, looking over at Schiff and Schiff said, ‘Yes.’ So, if Schiff made his case, why do you need more witnesses? Especially when Sekulow pointed out, oh and by the way, we’ll call the whistle-blower. We’ll call Adam Schiff. We’ll call Joe and Hunter Biden. You know, is this going to go on and on for months? We all know the President didn’t commit a crime, in fact, the President did a great job of standing up with Ukraine against Russia when Barack Obama wouldn’t do that. Barack Obama never sold them the Javelin missiles.

“So, anyway, President Trump did his job. It was great being with the President yesterday signing USMCA.”

On the need to end this impeachment charade and get back to work for the American people:

“I think the Senate will get it right, will get it done. They will acquit this President tomorrow.”

“The President didn’t commit a crime and he will be acquitted. Let’s get back to the work of the American people. I’m glad the President is focused on fighting for those hardworking men and women of this country.”