WASHINGTON, D.C.—House Republican Whip Steve Scalise (R-La.) spoke on the House floor today to slam Democrats’ rush into impeachment, despite zero evidence of any quid pro quo agreement in the transcript between President Trump and Ukrainian President Zelensky. Whip Scalise encouraged Democrats to abandon this baseless path to impeachment, and instead focus on the American people’s priorities: lowering drug prices, passing USMCA, and addressing the humanitarian crisis on our southern border. 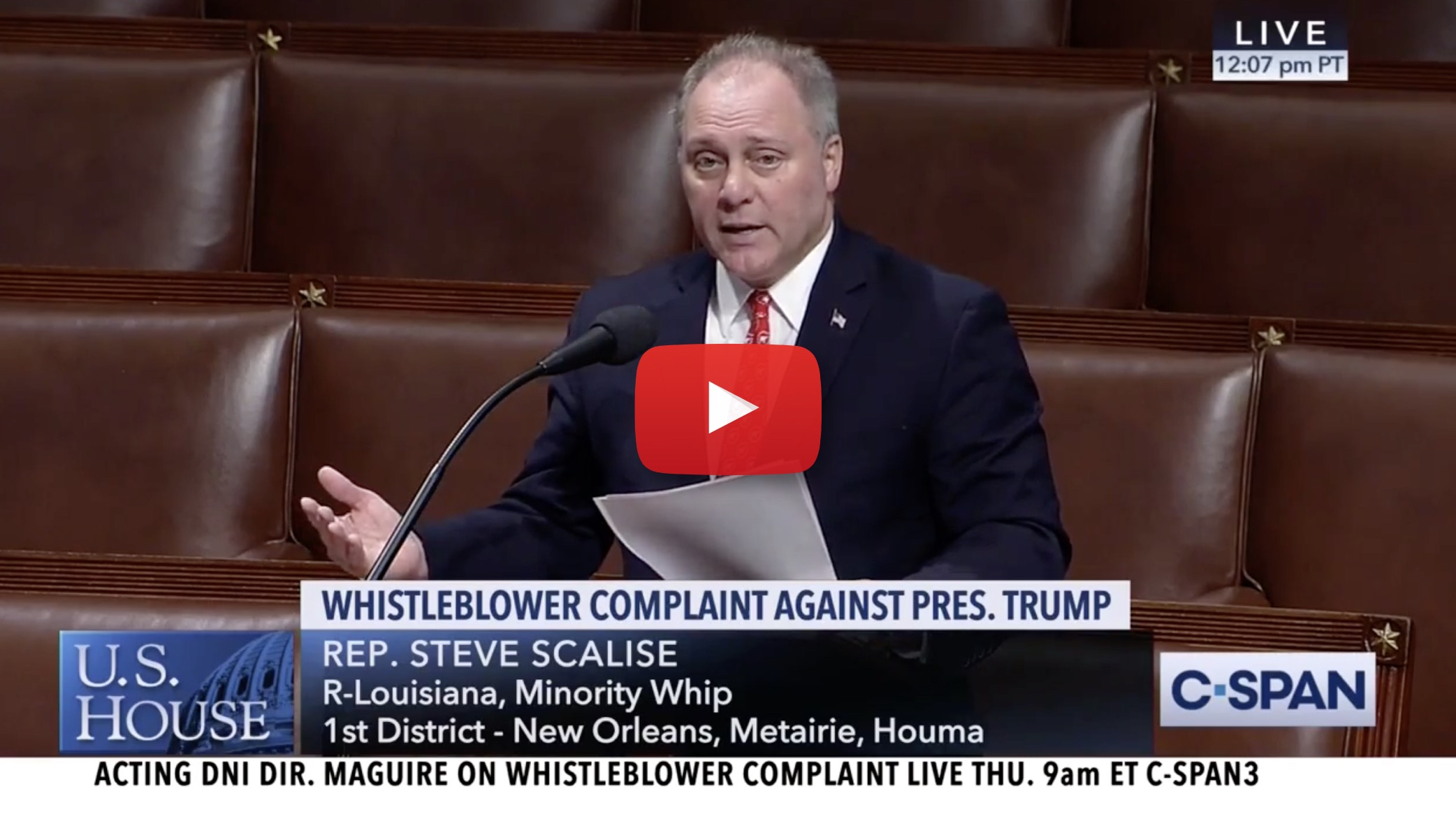 “As we speak, the White House is actually transmitting the documents that are mentioned in the resolution. So the White House has been going overboard doing more than has been done before to make sure that Congress has all the information they need about this issue. I think what really is at question is where this all leads to, and I think we know where it all leads to.

“The chairman of the committee of jurisdiction said he wants to bring articles of impeachment to the House floor by the end of this year. Keep in mind, there’s not a single article of impeachment that they’ve listed because there have been no crimes. They thought the Mueller Report was going to give them the crimes. Turned out, it showed there was no collusion. And instead of wrapping it up, they move on to look for something else.

“It’s not the job of a prosecutor by the way to look and hope to go and indict somebody and then look around and see if they find evidence. They’re supposed to follow facts and if the facts lead them there, that’s where they go. That’s not happening here.

“When you saw the Speaker of the House yesterday saying that the President committed crimes. Please name one crime that’s been listed. We’ve seen the report now. The transcript of a conversation between President Trump and Presidents Zelensky of Ukraine. There’s a lot of niceties here, President congratulating him on winning an election. There’s not a single quid pro quo, which we were told there would be.

“There’s not an exertion of pressure, which we were told that there would be. Now they bring up Joe Biden, Joe Biden himself has said that he exerted pressure on the Ukrainians. Bragged about the fact that he withheld a billion dollars in aid from the Ukrainians.

“So again, when we talk about something as serious as impeachment and obviously that’s where they’ve said they go. The speaker said she wants to get the committee working towards impeachment inquiry. Why? Why Madam Speaker, haven’t they brought a vote here on this House floor to start an impeachment inquiry?

“They’re scared to death of having a vote on this House floor on impeachment and yet they keep moving down that train track. It’s a reckless track when they say that they’re going to bring impeachment and even people that have read this, not that one of them pointed out a high crime or misdemeanor that’s in here. The quid pro quo that they promise doesn’t exist. These are the same people that promised that there was collusion with the Mueller report and there was no collusion.

“And so instead of moving on, they keep going down the impeachment path. People are sick and tired of the constant harassment of the President. Go read the transcript and you’ll see, again a President congratulating another President who was elected on a platform to root out corruption. And he’s working to root out corruption and we ought to cheer that instead of doing this, we ought to be focused on things like USMCA, lowering drug prices, solving real problems.