Once again, Chairman Schiff’s impeachment hearings failed to establish any new information on President Trump’s supposedly impeachable activities. The public already has access to the transcript of the call that Democrats asked today’s witnesses to dissect. The President released the transcript. There was no demand for an investigation, no political link mentioned at all, and Ukraine received the aid. It shows no crime and nothing impeachable.

Relentless in their pursuit of impeachment, Democrats still cannot present any direct evidence related to the quid pro quo they accuse President Trump of orchestrating with the Ukrainian president. Their hoaxes change by the day.

These hearings are a sham and a waste of American people’s time and tax dollars. 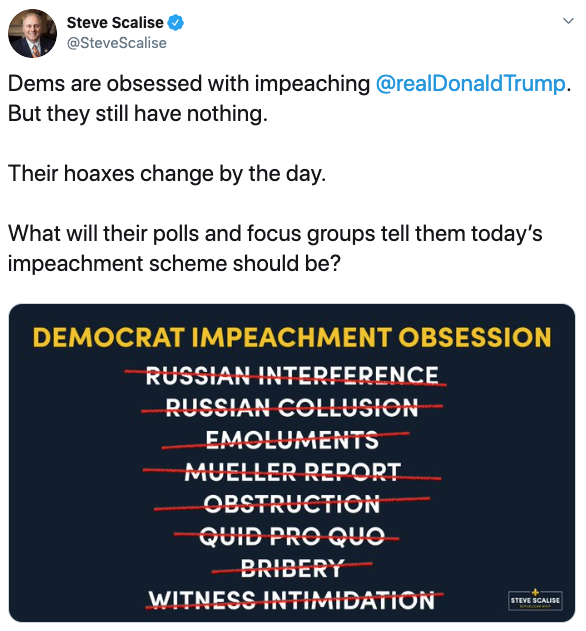 These witnesses listened in to the July 25th phone call, yet the transcript was made public weeks ago. And the transcript couldn’t be more clear: no demand, no mention of aid, no quid pro quo. 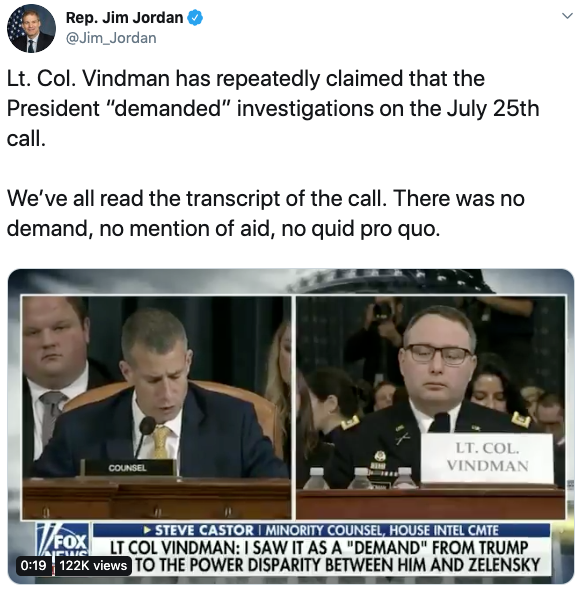 Chairman Schiff intervened in Republican questioning to prevent Lt. Col. Vindman from testifying about his contacts with members of the intelligence community in front of the House Permanent Select Committee on Intelligence.

Whip Scalise has previously argued in Fox News that the American people have a right to hear from the whistleblower. 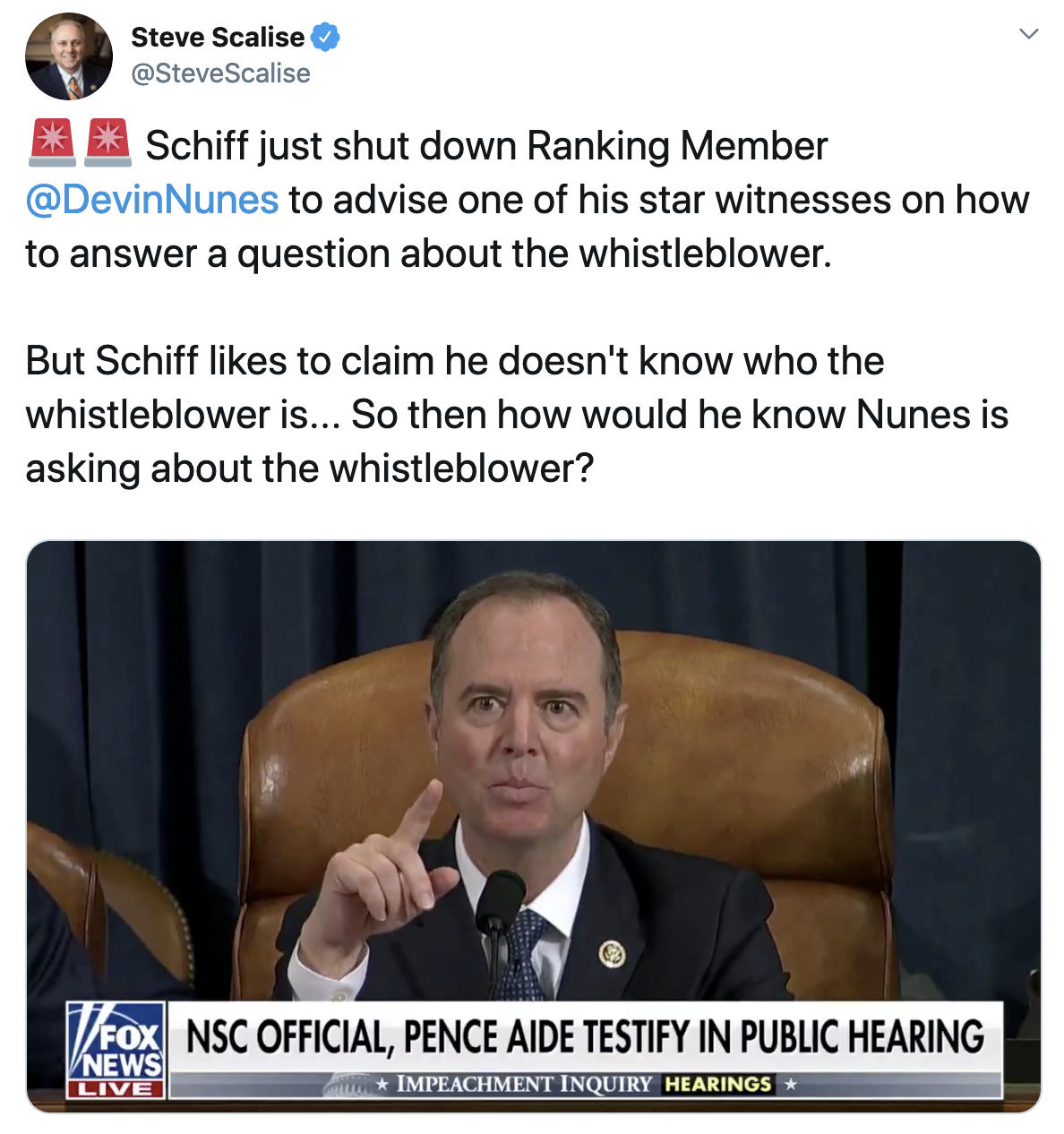 In one of the most important reminders during today’s hearing, Rep. Stefanik (R-NY) emphasized that the President of the United States, not unelected staffers, sets U.S. foreign policy.

As much as Democrats try to push their partisan narrative, policy disagreements between President Trump and his staff are not evidence of impeachment. Democrats’ case is collapsing. 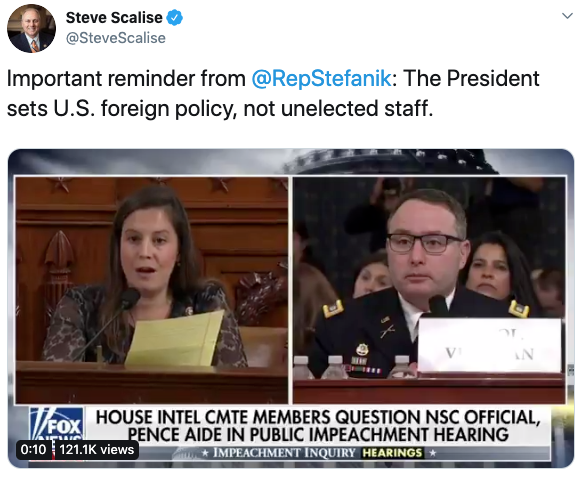 Ratcliffe: “Colonel Vindman, you haven’t either?”

Vindman: “That is correct.” 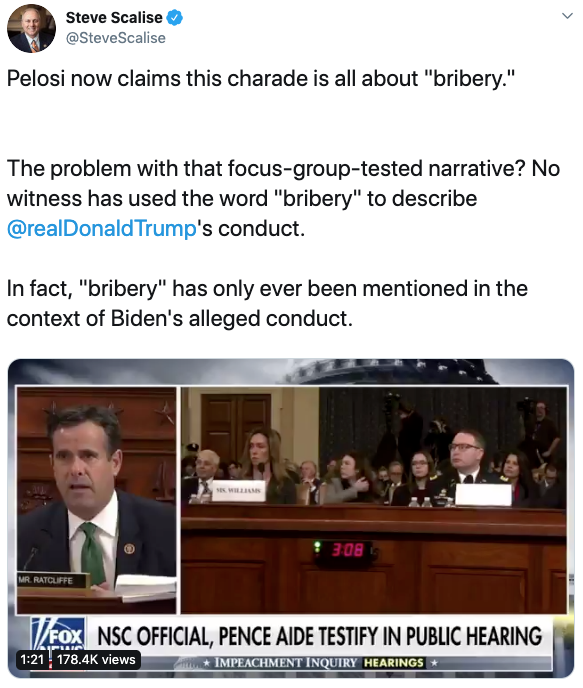 Pelosi claims this charade is all about “bribery.” The problem with that focus-group-tested narrative? No witness has used the word “bribery” to describe President Trump’s conduct. And yet, Democrats are attempting to impeach the president despite any evidence of bribery, wrongdoing, or criminal activity.

In fact, “bribery” has only ever been mentioned in the context of Biden’s alleged conduct.

It’s time to end this impeachment charade and get back to real work on behalf of the American people.