TOPLINE: Today marks one year since Joe Biden was sworn in as President of the United States. Instead of defeating COVID-19 and unifying the country like he promised, President Biden has worsened our divisions and made Americans poorer and worse off than where they were one year ago. Democrats’ far-left, socialist policies, and self-made crises are wreaking havoc on the economy and hurting parents, workers, and small businesses.

Thanks to President Biden’s out-of-control spending and destructive economic policies, inflation has reached its highest level in 40 years, with the Consumer Price Index rising by seven percent from December 2020 to December 2021.

We are one year into Joe Biden’s presidency, and the American people are paying over 35 percent more for a gallon of gas – price levels not seen since 2014.

When asked what the Biden Administration planned to do to increase oil production and lower gas prices, Energy Secretary Jennifer Granholm laughed and said, “that is hilarious.”

An increase in the cost of everyday goods and services disproportionately hurts lower-income families. Real average hourly earnings have decreased by 2.4 percent because of inflation.

President Biden, and his chief spokeswoman, have repeatedly downplayed concerns about inflation.

Speaking at a CNN town hall in July 2021, President Biden said, “it’s highly unlikely that it’s going to be long-term inflation that’s going to get out of hand.”

At a press conference in December 2021, White House Press Secretary Jen Psaki said that prices are moving “in a good direction.”

Democrats’ inflationary policies are hurting – not helping – the American people. 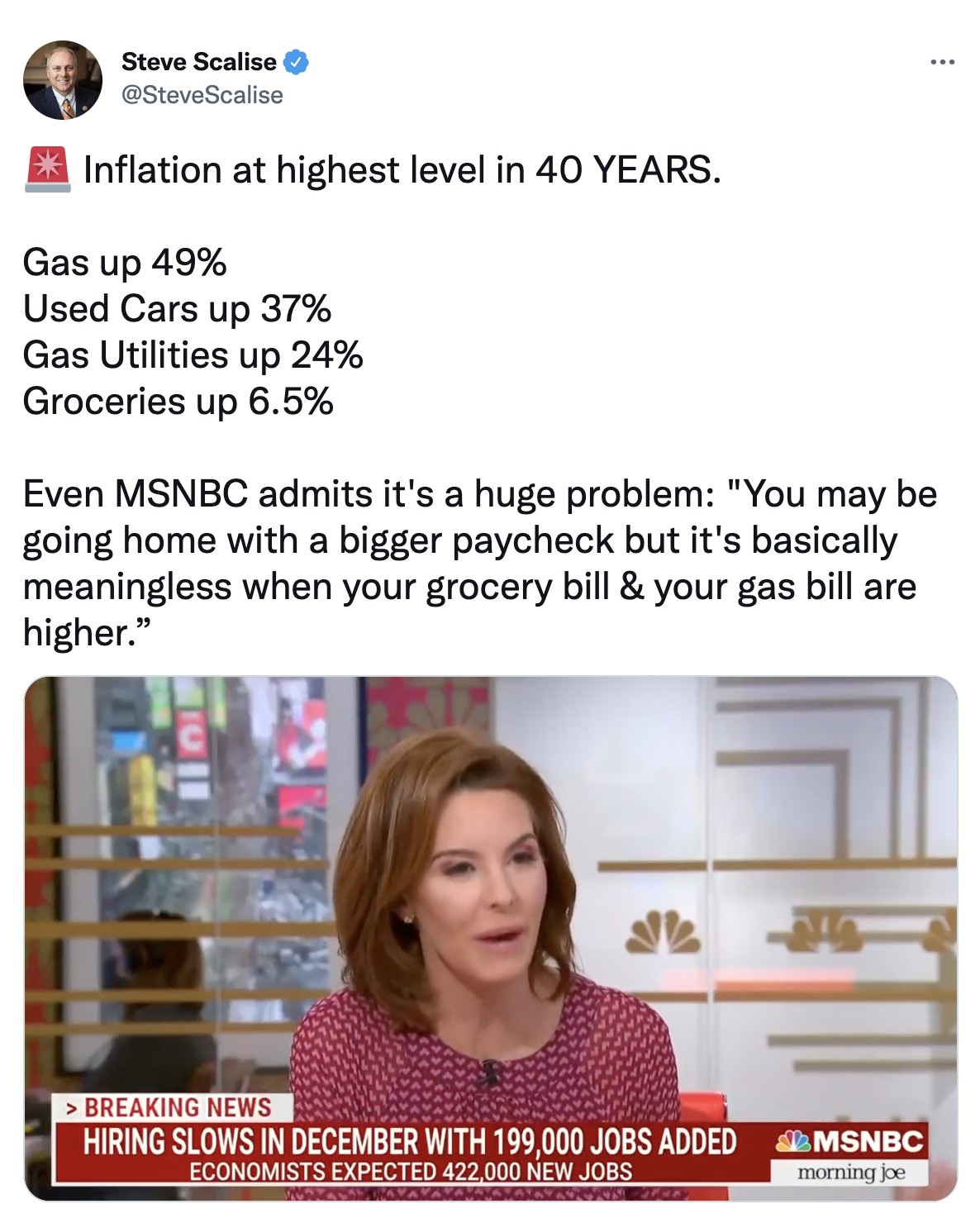 Despite inheriting three vaccines from President Trump’s Operation Warp Speed, COVID cases are increasing because the Biden Administration’s vaccine or bust strategy doesn’t focus enough on therapeutics and other lifesaving treatments. Tragically, more Americans have died under President Biden than under President Trump.

In an interview with ABC News, President Biden said, “I wish I had thought about ordering” 500 million at-home tests “two months ago.”

However, Vanity Fair reports that in October, the Biden Administration rejected a pitch from COVID-19 experts to increase rapid testing before families gathered for the holidays. 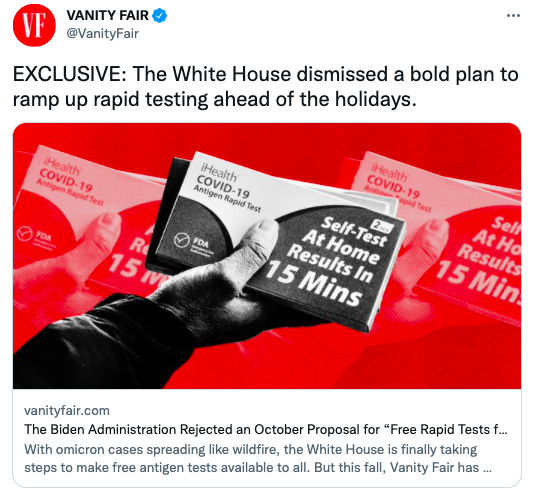 Despite control of both chambers of Congress, Democrats have failed to conduct real oversight of the Biden Administration’s disastrous response to the COVID-19 pandemic. This is a clear dereliction of duty.

If President Biden believes “there is no federal solution” to defeat the coronavirus, why did he try to illegally mandate COVID vaccines on millions of Americans through their private employers? Even Biden’s own CDC Director, Dr. Rochelle Walensky, admits that vaccines do not stop the spread of COVID-19. 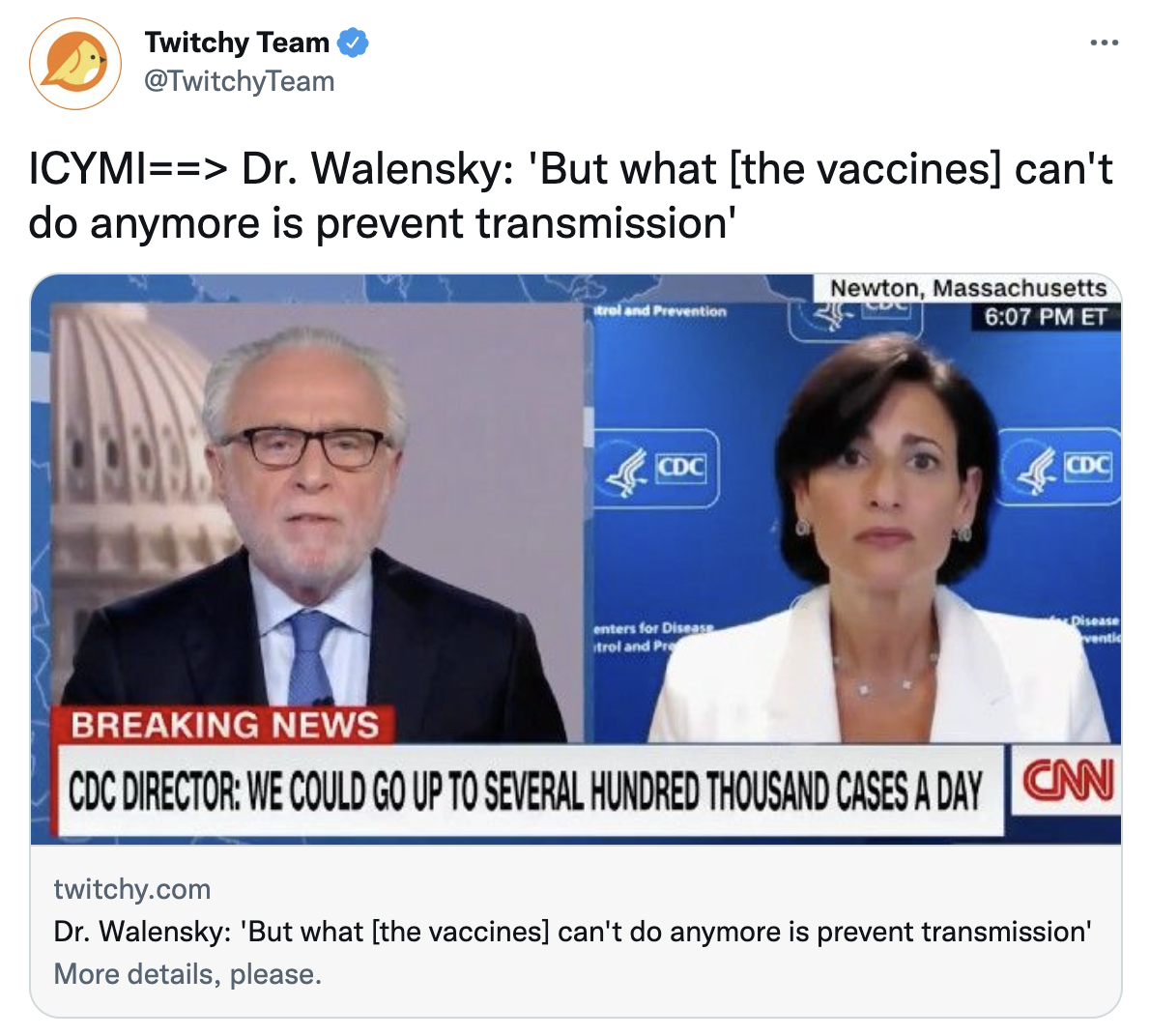 Our health care heroes were on the front lines during the worst times of this pandemic, and many have natural immunity. It is wrong for President Biden to push a mandate that punishes the same workers who have sacrificed so much to take care of Americans.

Additionally, President Biden must do more to keep students safe in the classroom.

School districts across the country received billions of dollars in aid from the federal government so that schools could resume in-person learning only for the unions to vote to close schools down.

Out of Control Border and Crime Crises

Since President Biden assumed control of the White House, more than 1.7 million illegal immigrants have been apprehended attempting to enter the United States. This number surpasses the population of Phoenix, Arizona, the fifth-largest city in America.

During the 2020 presidential campaign, Biden was highly critical of the Trump Administration’s border security policies, yet it is the Biden Administration that is putting kids in cages, putting potentially COVID positive illegal immigrants on private planes and sending them to cities across the country, effectively spreading the coronavirus, while firing Border Patrol agents who refuse to get a COVID-19 vaccine.

Democrats’ contempt for law enforcement extends well beyond their efforts to fire unvaccinated Border Patrol agents. Violent crime and murders are increasing because Democrat-run cities slashed funding for their police departments and implemented dangerous policies that incentivize criminal behavior and let malicious criminals back into their communities. 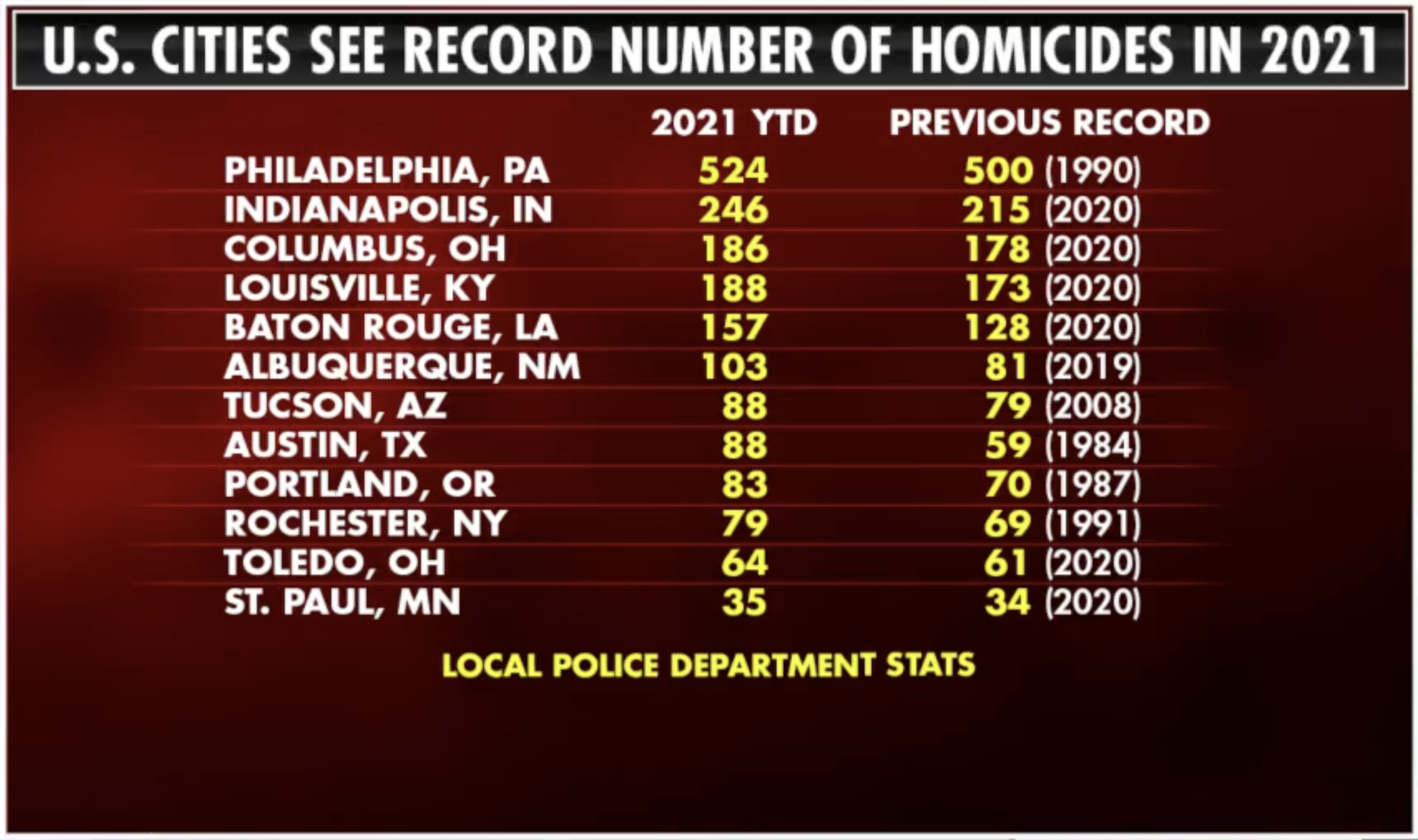 The statistics speak for themselves – Democrats’ far-left rhetoric, policies, and actions have jeopardized the safety of our nation’s law enforcement officers and vulnerable communities.

Materials and equipment are not being sent to factories as scheduled, shipments of finished products aren’t reaching distributors, and congestion at ports and other transportation bottlenecks are making it nearly impossible for shipments to arrive in stores on your doorstep on time. 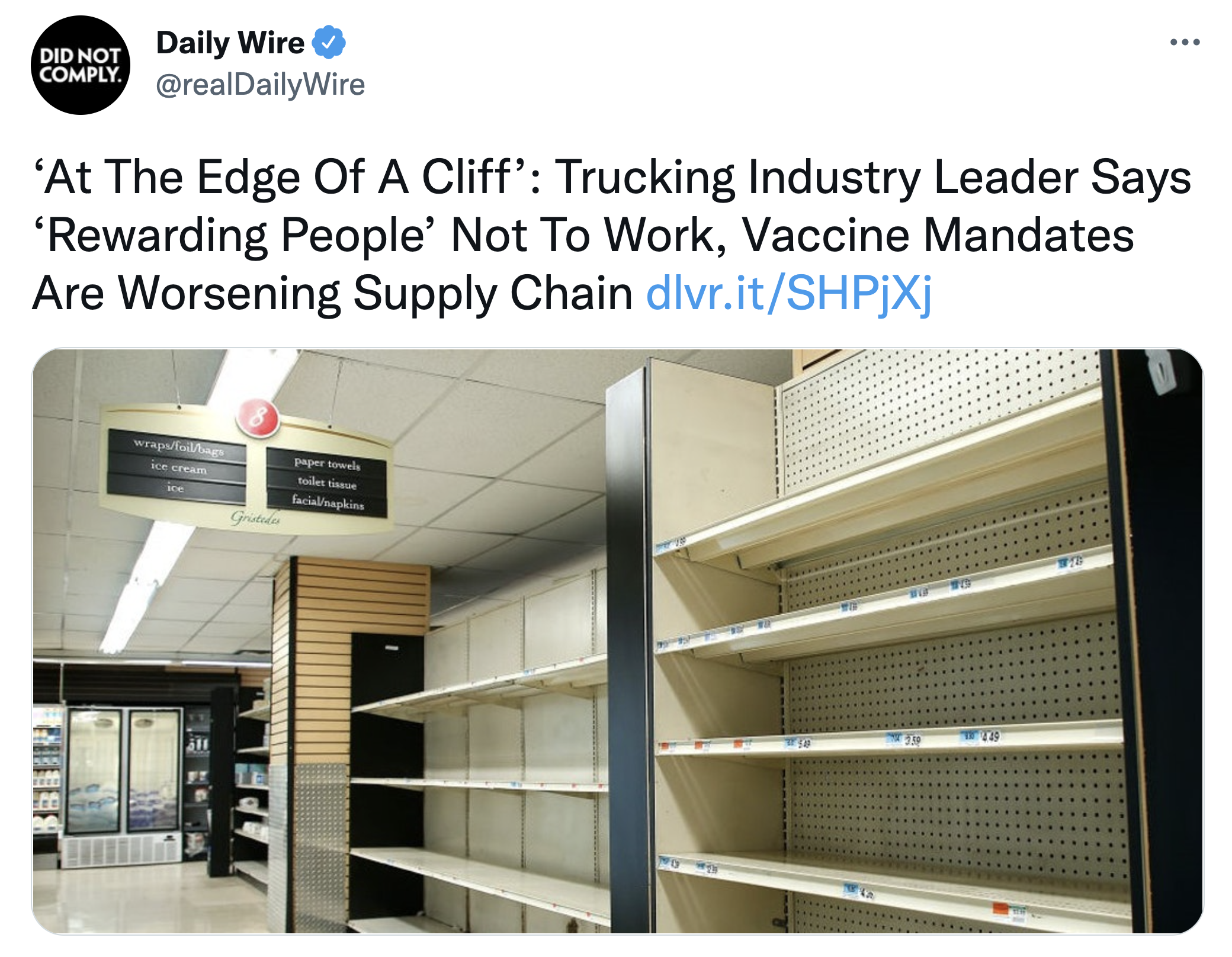 President Biden has no feasible plan to solve our supply chain crisis, and this is hurting American families and U.S. service members. Many military commissaries are experiencing empty shelves, and this is preventing troops from feeding their families.

Regular Americans are paying the price and experiencing the consequences of the Biden Administration’s failing transportation policies.

You would think that President Biden would understand the American people are souring on his extreme policies after Democrats were rejected in Virginia and his trillion-dollar tax-and-spending spree was placed on life support.

Ahead of Martin Luther King, Jr. Day, President Biden traveled to Atlanta, Georgia, where he delivered an inaccurate and inflammatory speech that politicized voting rights and compared opponents of his agenda as segregationists and proponents of slavery.

Let’s be clear: Anyone who is legally eligible to vote in the United States should not be denied the right to vote.But why is President Biden dead-set on getting rid of voter ID requirements, which are incredibly popular among American voters, and mandating same-day voter registration in every state in America?

These policies undermine election integrity and open the door to massive voter fraud. Maybe this is why President Biden has a 33 percent approval rating.

Democrats should abandon their political theatrics and focus on helping the families struggling because of the failures of the Biden presidency.

BOTTOM LINE: The American people are worse off under President Biden’s broken promises and disastrous leadership. Under President Biden, potentially COVID-positive illegal immigrants are being flown to cities across the country, household energy costs and the price of everyday goods have skyrocketed, and our supply chain is broken, leading to empty shelves at the grocery store. President Biden has no plan, no solution, and no remedy to fix his self-made crises and make America great again.