WASHINGTON, D.C.—House Majority Whip Steve Scalise (R-La.) spoke on the House floor tonight urging support for the continuing resolution that includes President Trump’s requested $5.7 billion for border security. Despite claims from Nancy Pelosi (D-Calif.) that this would not have the votes to pass, House Republicans overwhelmingly voted to secure the border and support the rule of law.

The legislation will now go before the Senate. Whip Scalise emphasized the danger open borders pose to the country with criminals and drugs entering our country and harming our communities. Will Chuck Schumer (D-N.Y.) and Senate Democrats vote for open borders or open government? 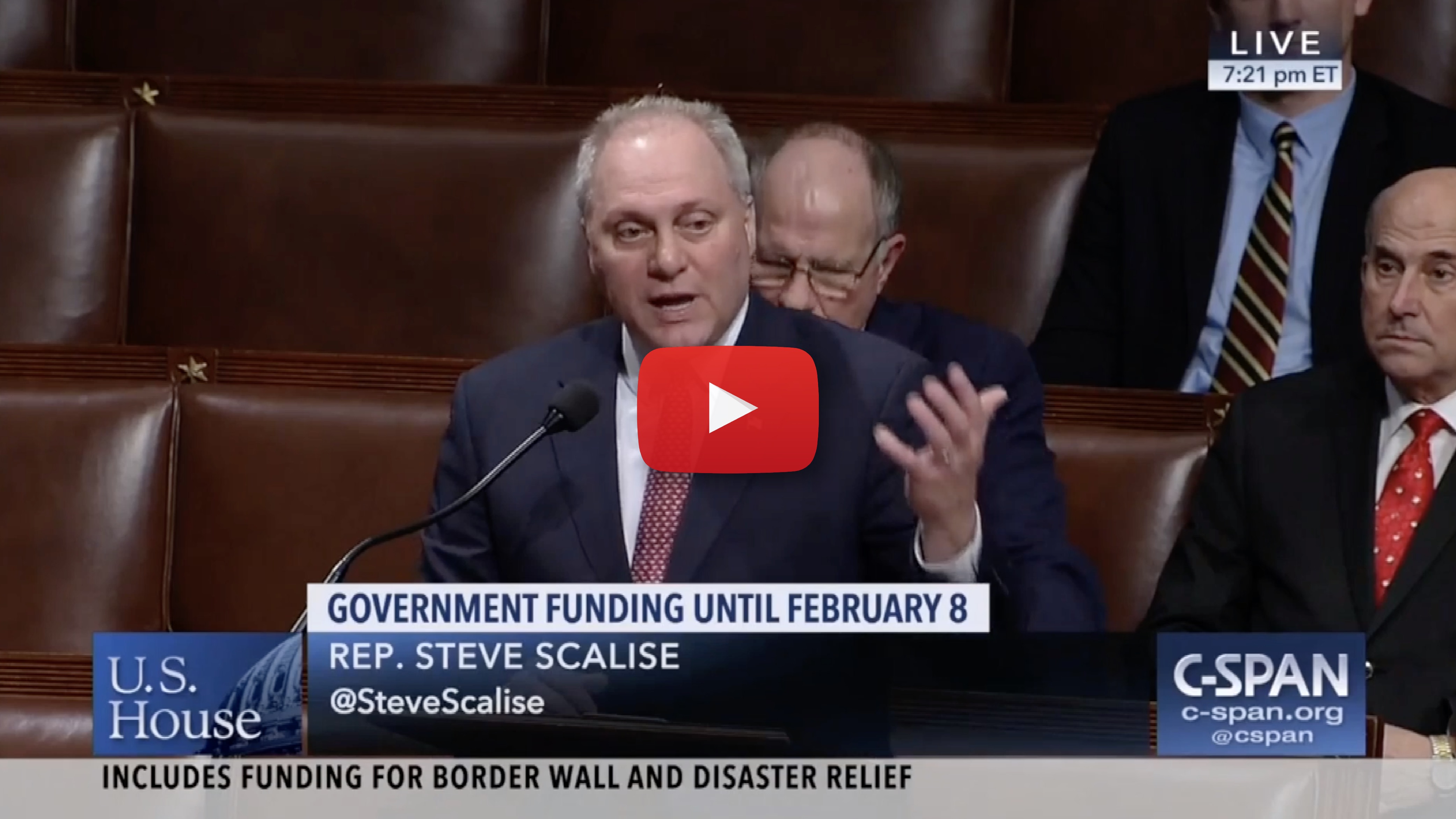 Whip Scalise’s full remarks are below:

Mr. Speaker, this is about keeping America safe. This is not a complicated vote, but it’s an important vote that really defines whether or not we are going to stand for border security in this country. For decades it has been promised.

There have been bills going back to the 1980s where we were promised that we were going to get a secure border and it never happened. Now, we have a President who ran on this issue. This isn’t something that just popped up. It was front and center during the campaign and he said, ‘I’m going to secure the border; I’m going to build the wall.’ And the people on the other side, our Democrat friends, said they didn’t want that. Some of them actually said they want open borders.

Some on the other side have said they want to abolish I.C.E., the very border patrol agents that are keeping the interior of America safe. Who are I.C.E.? Who are the people they want to get rid of, Mr. Speaker? Those I.C.E. agents, last year alone, saved over 900 kids from human trafficking. That is stuff that came across our border.

You know, we are a nation of immigrants and a nation of laws. My great-grandparents came here from Italy and I’m proud of that. We let more than a million people into this country legally every single year, the most generous country in the world. We should be proud of that.

But it is pretty hard to claim asylum, Mr. Speaker, when you came through Mexico and you forced yourself across that border and Mexico said we will offer you asylum. We will even offer you work permits and a job and you said no. It’s really hard to say you are claiming asylum here, when you turned down asylum in Mexico when you were coming across their border. It’s not about asylum. It’s about rule of law.

What do you say to the millions of people from other countries all around the world, who are waiting, in some cases 10 years, 15 years, 20 years, to come to America legally. They are waiting in these theoretical lines and they are doing it the right way. Then you’ve got a few thousand people who say, ‘We are just going to storm across your border regardless.’

You saw them, they were bragging. They just wanted to assign blame, ‘Are you going to take blame for the shutdown?’ They said, ‘We don’t want to give you money for the wall.’ And they’ve said it since, so if they have a personality conflict with the President don’t let the security of this nation get in the way of that.

The President said, ‘This is something I believe in because I care about the American people and I have a responsibility to keep this country safe.’ I wish everybody that came here across the border wanted to come here to seek the American dream. Mr. Speaker, we know that there are people that have come across this border with ill intentions for our citizens all across this nation.

Again, I mentioned last year the 900 children that were saved from human trafficking. My colleagues have talked about the opioids, the illegal drugs that have come across our border. The Secretary of Department of Homeland Security says on average every single day in America, 10 known or suspected terrorists try to come into this country illegally.

Some on the other side have said, ‘Oh the number is not 10.’ Okay, well then what is your number? How many terrorists coming into this country illegally every single day are enough? I say none.

There is a legal way to come here. Those are just the people we know of. How many people that want to break our laws, that want to do harm to our citizens, that want to jump in front of people that are trying to come to America the right way—how many more people have tried to come across that we don’t know about because we don’t have a secure border?

We have a President who says, ‘I need tools.’ There are some things that are in law. Right now, we in the law, tell the President where he can and cannot build the wall; what materials he can and cannot use. He’s got ideas. Mr. President has shown ideas of how to build a better border security wall at a cheaper cost, yet the law prohibits him from building it cheaper, in a better, more efficient way for the American people. How ridiculous is that? We remove that in this bill and tell the President he can build the wall however he wants in the most efficient way to keep America safe.

As I close, we’ve got a choice to make. There is a bill before us that we get to vote on to say, ‘Are we going to stand up for the rule of law and keeping this country safe and supporting the President’s ability to secure America’s border or not?’

You can vote yes or you can vote no, but don’t hide behind politics. This isn’t about the personality or the person in the White House, it’s whether or not we are going to respect the rule of law and keep America safe. I urge my colleagues to vote yes.