White House Walks Back Plan to Reopen Schools in 100 Days: Last week, White House press secretary Jen Psaki walked back President Biden’s pledge to reopen schools in 100 days. When pressed by a reporter on the President’s definition of reopening schools, Psaki stated, “His goal that he set is to have the majority of schools—so more than 50 percent—open by day 100 of his presidency, and that means some teaching in classrooms … Teaching at least one day a week in the majority of schools by day 100.” She later stated this one-day-a-week plan was “bold and ambitious.”

CDC Says Schools Can Reopen Safely – and Dr. Fauci Confirms Teachers Can Go Back to Classrooms without Vaccine: On Friday, the U.S. Centers for Disease Control and Prevention (CDC) issued guidelines showing that schools can safely reopen their doors to students. The Washington Post noted “[t]he guidelines for K-12 schools are not that different from those issued last summer by the Trump administration.” Dr. Fauci also again confirmed that schools can reopen safely before teachers are vaccinated. Why isn’t the Biden Administration listening to the experts and the science and taking steps to reopen schools now?

Cuomo Intentionally Hid Data from the Feds: Last week, a bombshell report found Governor Cuomo and his aides intentionally hid nursing home death data from the Department of Justice. Another report found the number of COVID-positive patients sent to nursing homes is more than 40% higher than reported by New York’s health department. It’s past time Governor Cuomo is held accountable for his actions.

Democrats Advance Partisan Spending Package: Last week, nine House committees held markups on the Democrats’ budget reconciliation scheme to spend $2 trillion on their liberal agenda. Dozens of commonsense amendments were offered by Republicans to improve the bill, but most all of them were rejected by Democrats.

1,000,000 American Mothers are Out of Work: According to a recent report, nearly one million mothers have left the workforce, “with Black mothers, Hispanic mothers and single mothers among the hardest hit.” Jed Kolko, chief economist at the jobs site Indeed, said “Distance learning and child care have been huge burdens on parents — especially mothers — who have been forced to balance employment and caregiving.” Prior to the pandemic, the Trump Administration’s job-creating policies allowed women to thrive in the workforce. Now, because of draconian lockdowns and teachers unions refusing to go back to work, women’s labor force participation is at a 33-year low. We need to end the lockdowns and reopen schools to help women go back to work.

President Biden Calls Women Out of Work, Kids Out of School a “National Emergency,” but Doesn’t Take the Steps Needed to Fix It: Last week, President Biden called women losing jobs and school closures a “national emergency,” but he has enabled the problem by caving to radical teachers unions and failing to call on Democrat governors to end their lockdowns that are hurting economic recovery. Experts have said most women have left the workforce due to school closures and childcare needs. If President Biden truly wants to address this “national emergency,” then he would listen to the experts and reopen schools instead of catering to the unions.

Moving the Benchmark on Reopening Schools: President Biden pledged to reopen schools in 100 days, but he failed to provide Americans the fine print of his bold talking point. Facts revealed last week show that under his plan, most schools will not fully reopen. At a White House press briefing, press secretary Jen Psaki walked back President Biden’s pledge to reopen schools in 100 days after being pressed by a reporter on the President’s definition of reopening schools. Psaki stated, “His goal that he set is to have the majority of schools—so more than 50 percent—open by day 100 of his presidency, and that means some teaching in classrooms … Teaching at least one day a week in the majority of schools by day 100.” CDC officials have called for returning children to classrooms as soon as possible, underscoring in-person learning can be carried out safely. Dr. Fauci has also said “it’s less likely for a child to get infected in the school setting than if they were just in the community.” CDC Director Rochelle Walensky also said teachers can return to the classroom without being vaccinated. Why is President Biden ignoring the experts when he promised to listen to them?

Holding Cuomo Accountable: Following reports that Governor Cuomo intentionally withheld nursing home data from the Department of Justice and the number of COVID-positive patients sent to nursing homes is more than 40% higher than reported by New York’s health department, Republican Whip and Select Subcommittee on the Coronavirus Crisis Ranking Member Steve Scalise (R-La.) called for the Department of Justice to investigate and prosecute those responsible.

Reopen the Schools Now: Following CDC guidance stating schools can reopen safely without teachers being vaccinated, Republican Whip and Select Subcommittee on the Coronavirus Crisis Ranking Member Steve Scalise (R-La.) called for schools to reopen immediately and called on President Biden to follow the science instead of the unions.

Cuomo aide Melissa DeRosa admits they hid nursing home data so feds wouldn’t find out (NY Post)
“Gov. Andrew Cuomo’s top aide privately apologized to Democratic lawmakers for withholding the state’s nursing home death toll from COVID-19 — telling them ‘we froze’ out of fear that the true numbers would ‘be used against us’ by federal prosecutors, The Post has learned.”

Over 9,000 virus patients sent into NY nursing homes (Associated Press)
“More than 9,000 recovering coronavirus patients in New York state were released from hospitals into nursing homes early in the pandemic under a controversial directive that was scrapped amid criticism it accelerated outbreaks, according to new records obtained by The Associated Press. The new number of 9,056 recovering patients sent to hundreds of nursing homes is more than 40% higher than what the state health department previously released.”

The Cuomo Covid Coverup (WSJ Editorial Board)
“Three months ago New York Gov. Andrew Cuomo was awarded an Emmy for “his leadership during the Covid-19 pandemic and his masterful use of TV to inform and calm people around the world.” Turns out the Emmys had the right actor—but the wrong performance. Increasingly it looks like Mr. Cuomo’s real act was to keep people from finding out how many people in his state’s nursing homes died from Covid-19.”

Lockdowns are breaking our kids — and the damage may be permanent (NY Post Opinion)
“Our hope for raising an emotionally healthy and mentally stable generation is dissipating with every day kids are kept locked in their bedrooms and out of schools. Skyrocketing rates of depression and anxiety are in no small part due to the fact that children feel neglected and forgotten, and they are not wrong to feel that way. Our society has abandoned them and treated them as disposable. The damage caused by this abandonment is incalculable, and compounding every day we allow inertia, irrationality and the craven priorities of teachers unions to rule our decision-making.”

Will Biden follow the science or the teachers unions? (Washington Post Opinion)
“Biden says he wants kids to return to school. But instead of calling out his teachers union allies, he is giving them a pretext for holding out by insisting that Congress must pass his $1.9 trillion covid relief package first in order for schools to reopen safely. This is a canard. Congress just approved $54 billion in December for K-12 schools, on top of the $13.5 billion set aside for schools in the Cares Act last spring.”

The Teachers Unions Roll Over Biden (Wall Street Journal Editorial Board)
“If Mr. Biden really wants to lead, he’d use his bully pulpit to say school districts that don’t reopen classrooms won’t get the money. Instead we get Ms. Psaki defining classroom instruction down. This ridiculous standard for success is what George W. Bush once called the soft bigotry of low expectations.”

White House Goes Small on School Reopenings (Politico Playbook)
“On Tuesday, in what’s becoming something of a habit, the White House added an asterisk to that bold Biden promise. The 100-day goal has been downgraded to 50% of schools having ‘some teaching’ in person ‘at least one day a week.’ It is a goal so modest and lacking in ambition as to be almost meaningless.”

Janice Dean: For months, Janice Dean has sought justice for nursing home patients who died as a result of Governor Cuomo’s deadly order sending COVID-positive patients to nursing homes and long-term care facilities. She tragically lost both her father-in-law and her mother-in-law, Michael and Dolores “Dee” Newman, due to this “must admit” order. Thursday, February 11 would have been Michael and Dee’s 60th wedding anniversary. Due to Janice’s continued efforts to bring transparency and justice for those who lost loved ones, we are getting closer to holding Governor Cuomo accountable for his actions. 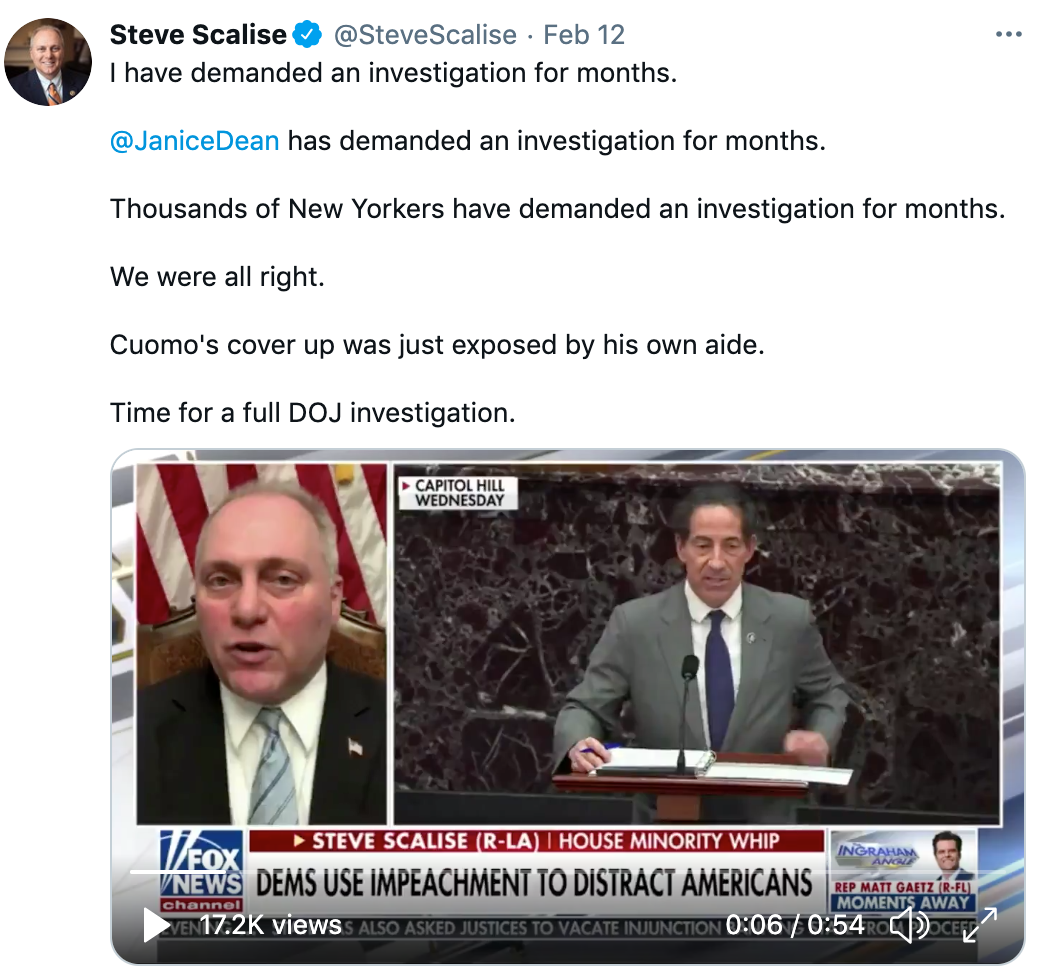 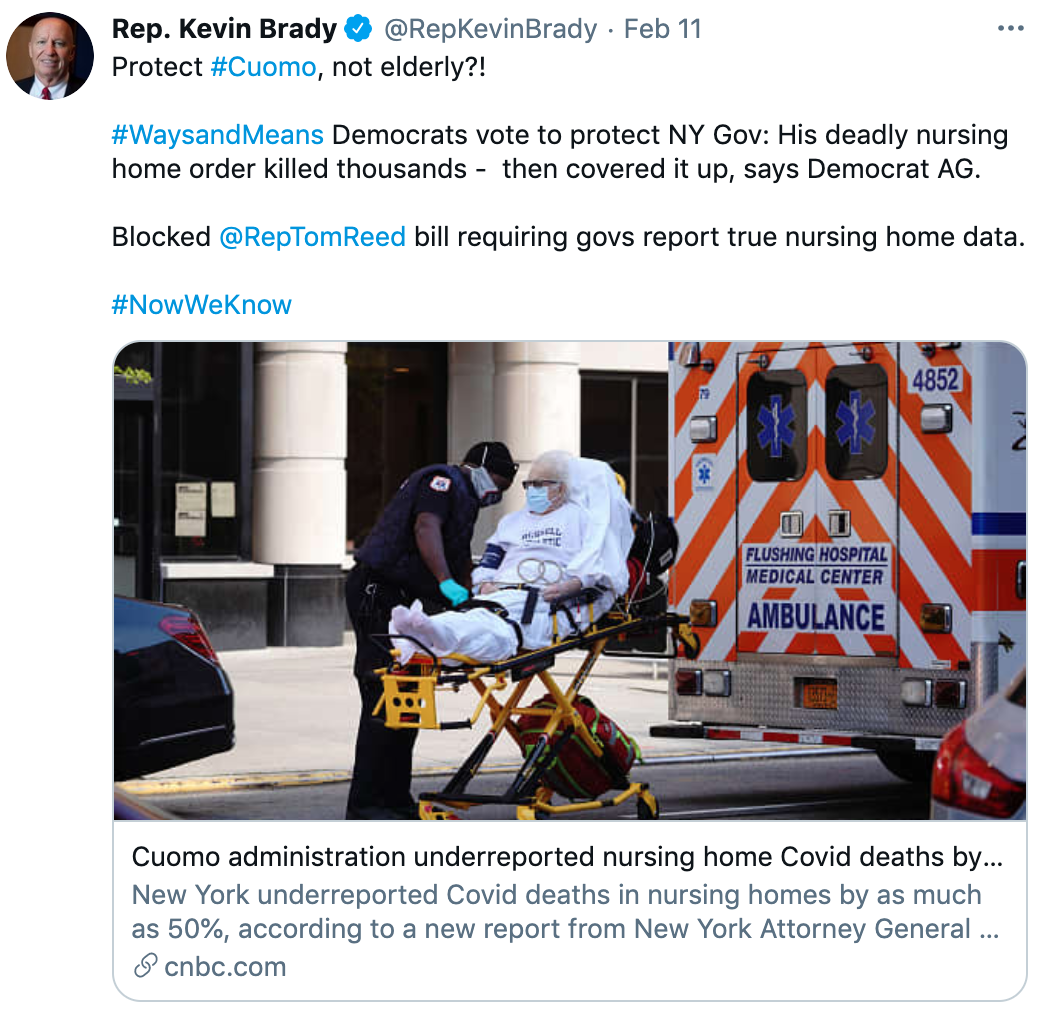 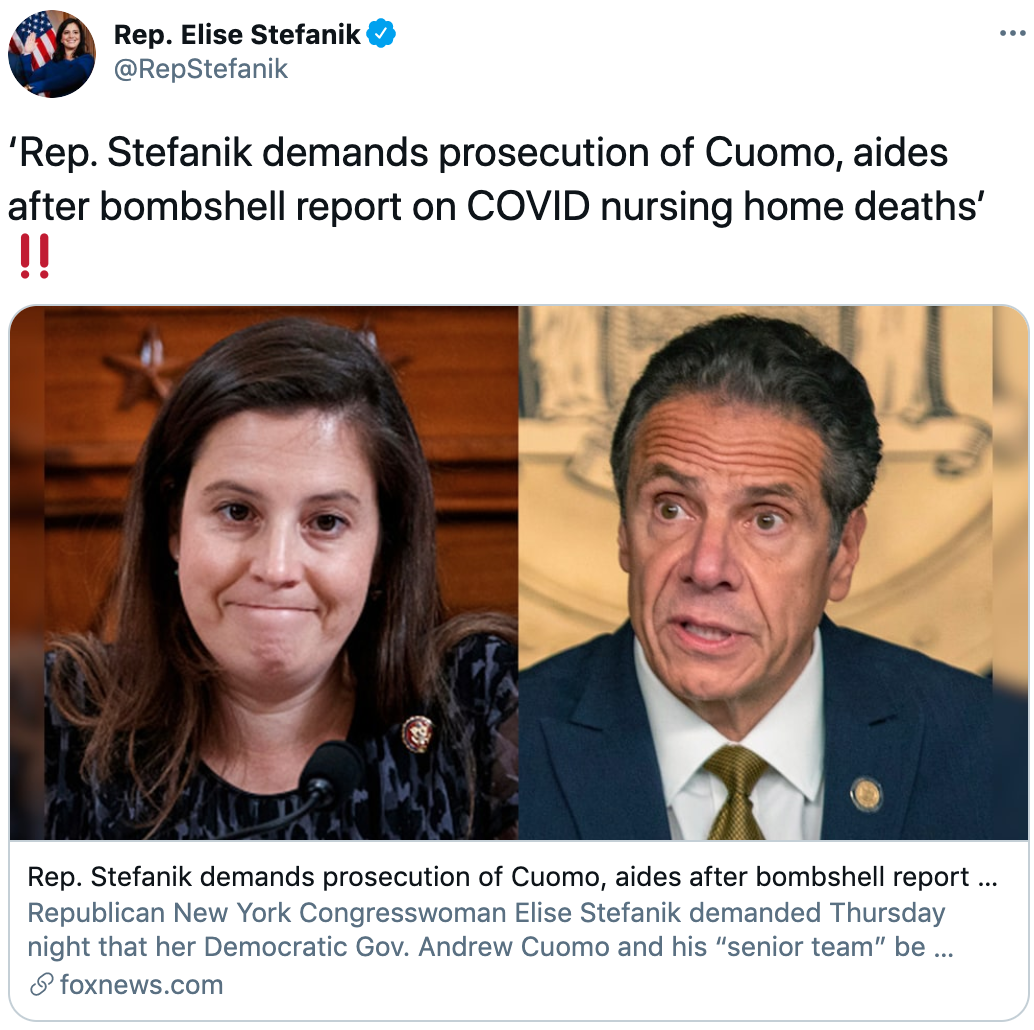 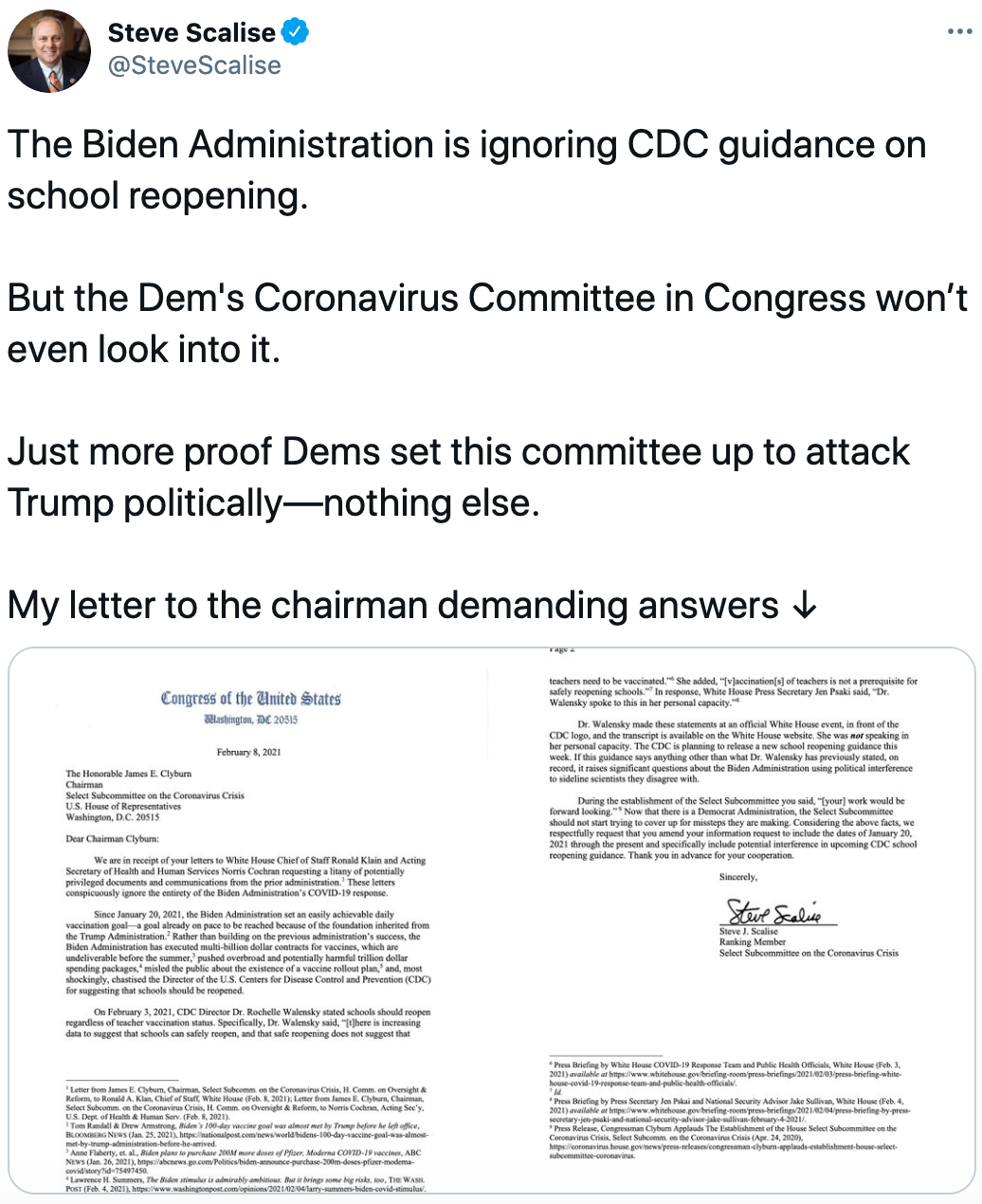 The Republican Doctors Caucus wrote to President Biden calling on him to reopen schools. 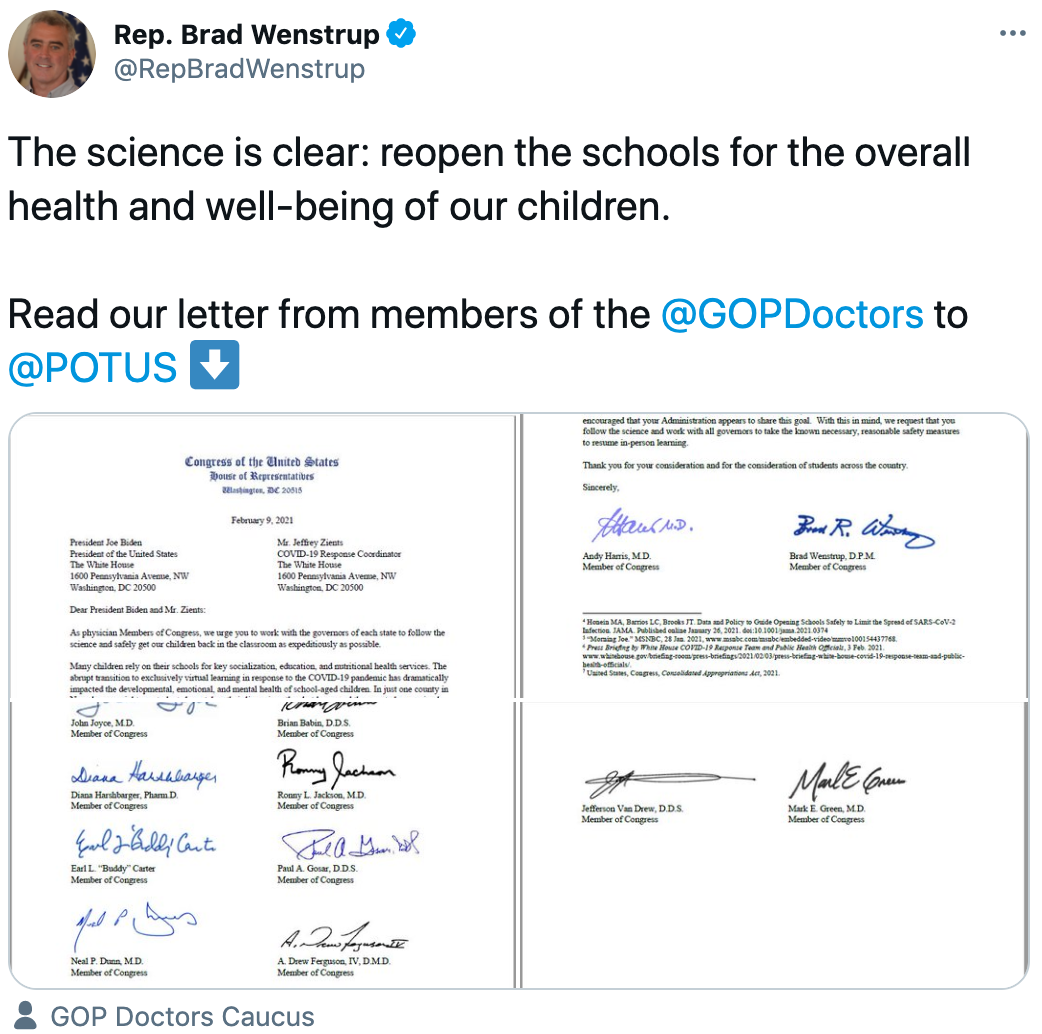 Committee on Oversight and Reform Ranking Member James Comer (R-Ky.) calls on President Biden to follow the science and reopen schools instead of taking orders from the union bosses. 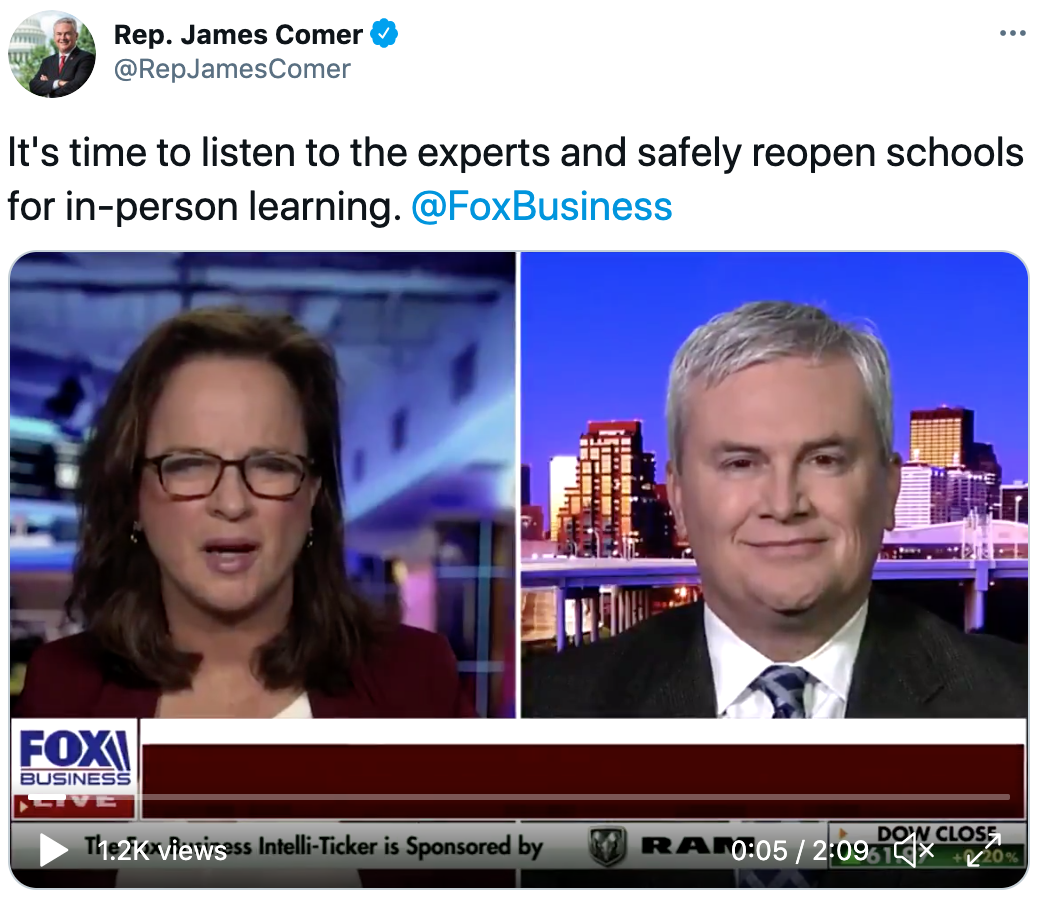 Select Subcommittee Republicans point out how school closures have forced American mothers out of the workforce. 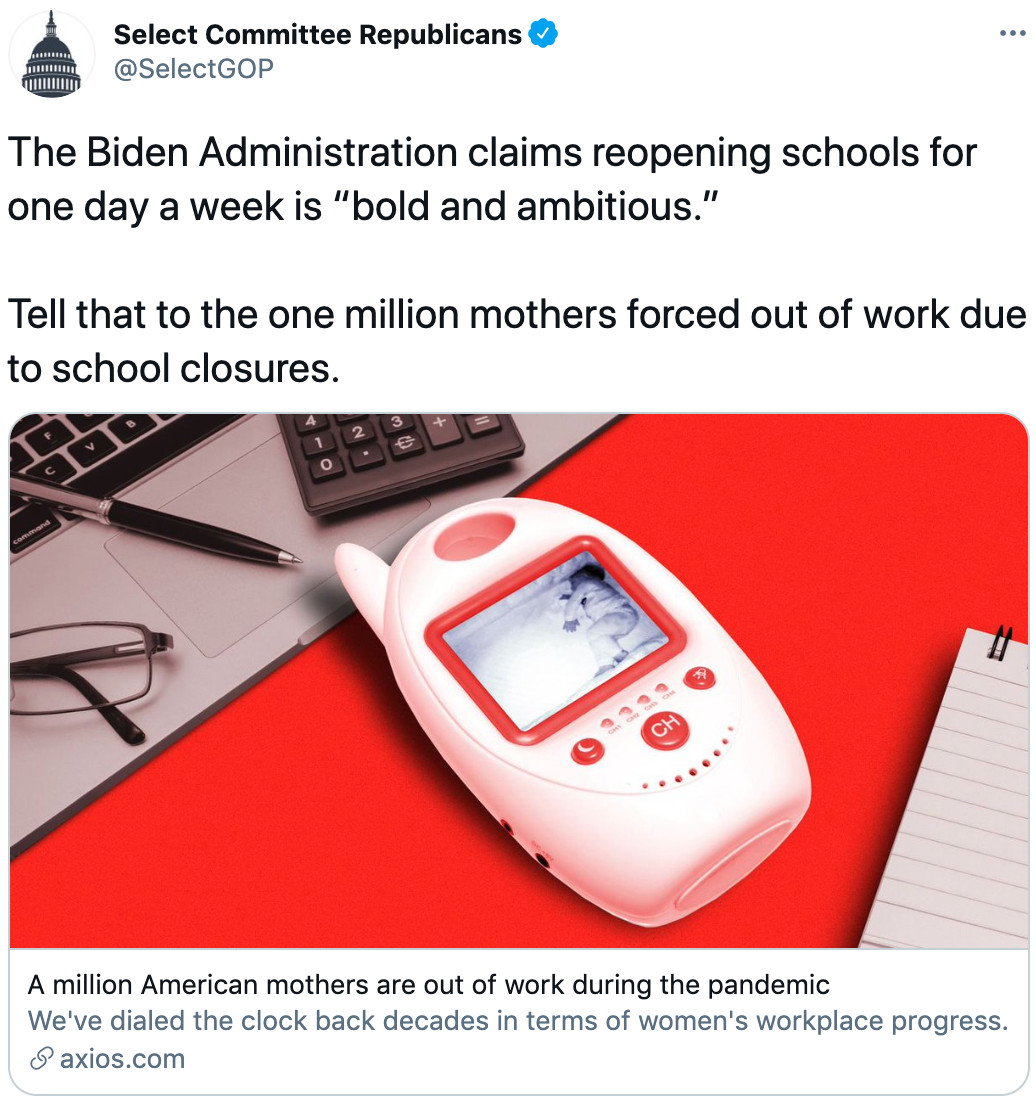 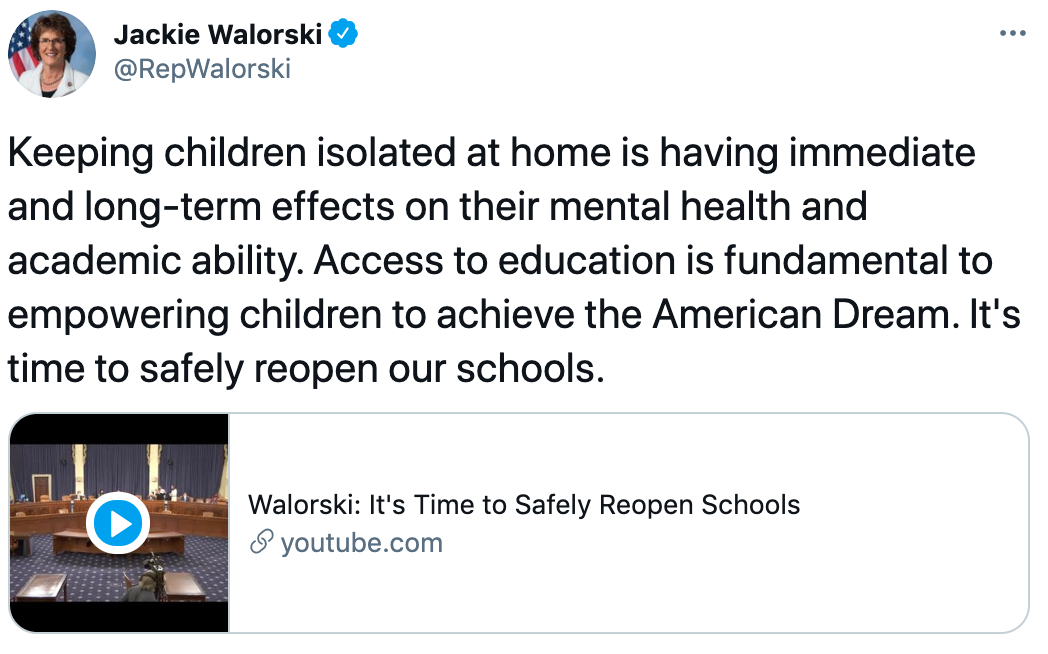