Cuomo’s Cover-Up Collapsing: Governor Cuomo undercounted deaths as a result of his order sending COVID-positive patients to nursing homes and tried to hide data from the feds. Now, Cuomo is losing support from his own party in New York and is threatening those who oppose him. Select Subcommittee Republicans are taking action. When will Select Subcommittee Democrats investigate this scandal?

Most School Funds in Democrats’ Bill Wouldn’t Be Spent until After 2021: About 95% of the education funding contained in the Democrats’ $2 trillion spending bill wouldn’t be spent until after 2021. Republican Whip and Select Subcommittee Ranking Member Steve Scalise has called for school funding to be tied to a requirement to instruct students in-person. Meanwhile, President Biden and Vice President Harris continue to follow the unions instead of the science when it comes to schools reopening their doors to in-person learning. Do Democrats not plan on reopening schools this year?

Democrats Claim More Stimulus is Needed to Reopen Schools: Despite the overwhelming scientific evidence that we can reopen schools safely, Biden Administration officials say we need more stimulus funding to do so. This past week, Dr. Fauci and CDC Director Walensky parroted these talking points. According to CDC estimates, implementing all necessary precautions needed to reopen schools safely and successfully would cost about $23 billion. However, Congress has provided states with billions of dollars and its estimated they have access to between $54 and $64 billion.

Additionally, if opening schools is dependent on more resources, why is 95% of the money for education in Democrats’ spending package not projected to be spent until after 2021? In fact, more than two-thirds of the education money in Democrats’ bill isn’t spent until 2023 or later. Reopening schools clearly is not about money; it is about politics.

Virtual School Harming Children’s Health: Dr. Roy Kim, the head of pediatric endocrinology at Cleveland Clinic Children’s stated that virtual school is leading to children gaining weight and disrupted sleep cycles. This comes on the heels of reports across the country showing increased suicide and mental health issues as a result of school closures. Last week, Republicans heard from parents across the country regarding how virtual learning is harming their children’s mental health and causing depression.

Biden Spends $4 Billion on WHO Vaccine Project: Last week, President Biden announced he will spend $4 billion in taxpayer dollars to fund the World Health Organization’s vaccine project, despite the WHO covering up China’s lies over the past year. Taxpayer dollars would be better spent here at home, particularly in minority and underserved communities.

Vice President Harris Doesn’t Follow the Science on Schools: The CDC has said it is not a prerequisite for teachers to be vaccinated before returning to classrooms. During an interview with the Today Show last week, however, Vice President Harris could not answer a simple question whether teachers can return safely to the classrooms now. Despite pledging to follow the science and the experts, the Biden Administration is instead following the unions’ unscientific demands.

No Vaccine on January 20, 2021?: During his townhall on CNN, President Biden falsely claimed “we didn’t have [the coronavirus vaccine] when we came to office. But President Biden got the vaccine on December 21, 2020, a month before he was inaugurated. 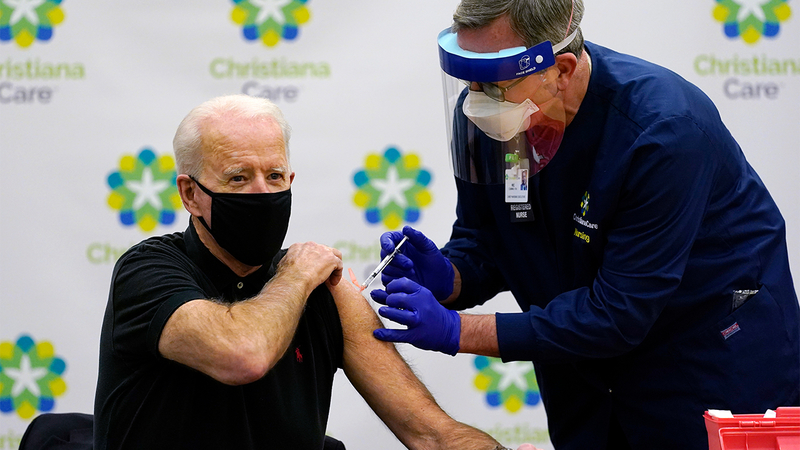 Working with Parents to Reopen Schools: Last week, Republican Whip and Select Subcommittee Ranking Member Steve Scalise, Ranking Member Virginia Foxx, and Reps. Ashley Hinson and Brad Wenstrup held a phone call with over 100 parent leaders in the school reopening movement to hear how we can continue to work together to safely reopen our schools around the country. During the call, parents across the country discussed the issue of how we must follow the science and safely reopen schools to protect struggling students. Several parents shared their personal stories on how the nearly year long battle to reopen schools has negatively impacted their children.

Team Biden is still pushing blatant lies about the Trump vaccine plan (New York Post Editorial Board)
“Why is Team Biden sticking to its ridiculous ‘Trump had no vax-distribution plan’ claim? Vice President Kamala Harris trotted it out in a weekend interview, yet again insisting that the new administration is effectively ‘starting from scratch’ because of its predecessor’s failures. Ha! After President Biden made a similar statement weeks ago, Dr. Tony Fauci, Biden’s chief medical adviser as he was Trump’s, set the record straight: ‘We are certainly not starting from scratch because there is activity going on in the distribution.’”

Fauci boss gives Trump administration credit on Operation Warp Speed (Axios)
“National Institutes of Health director Francis Collins tells ‘Axios on HBO’ that the Trump administration deserves credit for the “breathtaking” speed of COVID vaccine development. The fact that it ‘got done in 11 months from when we first knew about this virus is at least five years faster than it’s ever been before before,’ Collins said. ‘The Operation Warp Speed, for which I give a great deal of credit to [former HHS Secretary Alex Azar], was a effort that many of us were not initially convinced was going to be necessary. And it was thought about as a Manhattan Project.’”

My Mother Got Covid in a New York Nursing Home (WSJ Opinion)
“My mother, Joan Morris, died of Covid-19, which she contracted at a Brooklyn, N.Y., nursing home. She arrived there Jan. 24, 2020. She came down with Covid symptoms the week of April 5. She was sent to the hospital on April 10, was diagnosed with Covid on April 11, and died on April 17. My mother’s death was entirely preventable … and she would be alive today but for Gov. Andrew Cuomo’s executive order that forced nursing homes to accept Covid patients—which he issued despite the availability of thousands of beds in the empty Javits Convention Center.”

Democrats would delay school COVID-19 spending, threatening reopening (Washington Examiner Opinion)
“Despite school opening demands from allies of President Biden, including Dr. Anthony Fauci, the Democratic coronavirus spending plan would delay the bulk of education spending until next year and later, potentially threatening school reopening until 2023. … ‘Do parents have to wait until 2023 or later to send their kids back to school?’ said McCarthy spokesman Mark Bednar.”

The Non-Covid Spending Blowout (WSJ Editorial Board)
“The Biden White House is pointing to polls showing that its $1.9 trillion spending bill is popular, and the press corps is cheering. Yet we wonder how much public support there’d be if Americans understood that most of the blowout is a list of longtime Democratic spending priorities flying under the false flag of Covid-19 relief … It’s a progressive blowout for the ages that does little for the economy but will finance Democratic interest groups for years. Please don’t call it Covid relief.”

Scalise & Phillips: We already went ‘big’ on coronavirus relief. More of the same won’t solve the problem. (Washington Post Opinion)
“President Biden says the risk of coronavirus relief legislation is not in going too big but in going too small. This is a false choice, and we shouldn’t let platitudes about ‘going big’ mask the need for smart and effective policy. Congress has already gone ‘big’ — so big that more than $1 trillion of previously enacted assistance remains unspent. Simply doing more of the same won’t solve the country’s problems.”

Granger & Foxx: Follow the science, reopen schools now (Washington Times Opinion)
“Congress has already provided significantly more funding than the CDC says is necessary to reopen schools safely. Yet, many students are still not at their desks, and money remains unused. If school closures continue, we will see lasting negative effects for our nation’s children. Instead of adhering to the fear-mongering tactics of unions, let’s follow the science — by reopening schools now.”

Scalise rips Biden school-reopening goal: ‘You’re afraid of standing up to the teachers union’ (Fox News)
“Rep. Steve Scalise, R-La., said President Biden’s goal to open the majority of K-8 schools by April 30 falls way short of what school children need, and the Republican Whip urged Biden to choose science over teacher unions. Scalise, fresh off a call with concerned parents who want their schools reopened, said Biden’s goal should be 100% of schools opened within his first 100 days. Anything short of that is a disservice to the children who are suffering. ‘Either you are going commit to opening up all schools safely, or you’re going to be leaving millions of kids behind for no reason other than you’re afraid of standing up to the teachers unions. Because the science is very clear: You can open up every school safely today and the money is there to do it,’ Scalise told Fox News.”

New York Assemblyman Ron Kim: Democrat New York State Assemblyman Ron Kim, whose uncle died in a New York nursing home from COVID-19, has been working to hold officials accountable for the order mandating contagious COVID-19 patients to nursing homes and long-term care facilities. Even as Governor Cuomo has threatened to destroy his political career, Assemblyman Kim says, “I refuse to lie to cover up something that this administration, you know, possibly had broken the law.”

Republican Whip and Select Subcommittee Ranking Member Steve Scalise (R-La.) wants to hear from parents whose students are struggling as a result of school closures. 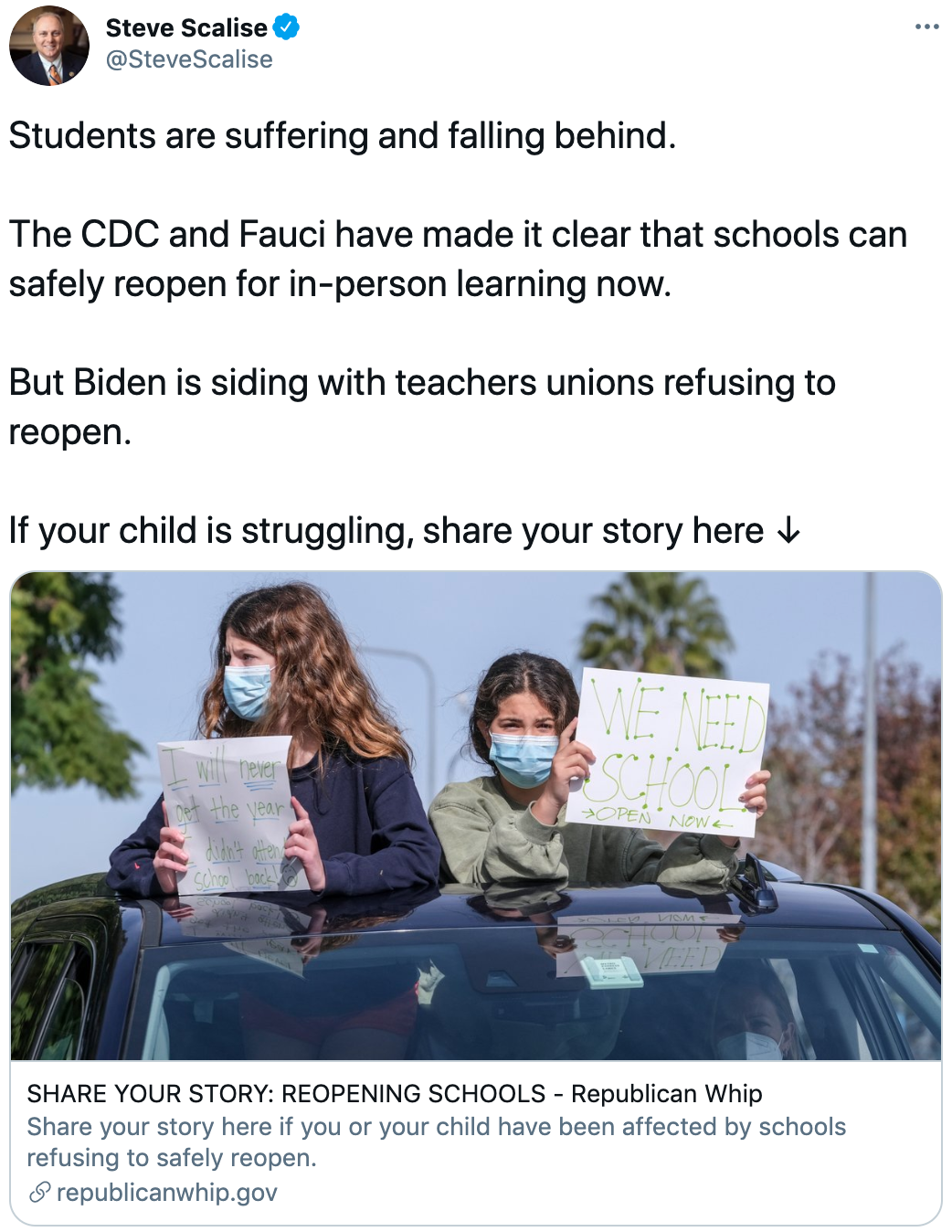 Republican Leader Kevin McCarthy (R-Calif.) points out that 95% of the education money in the Democrats’ spending bill won’t be spent until after 2021. 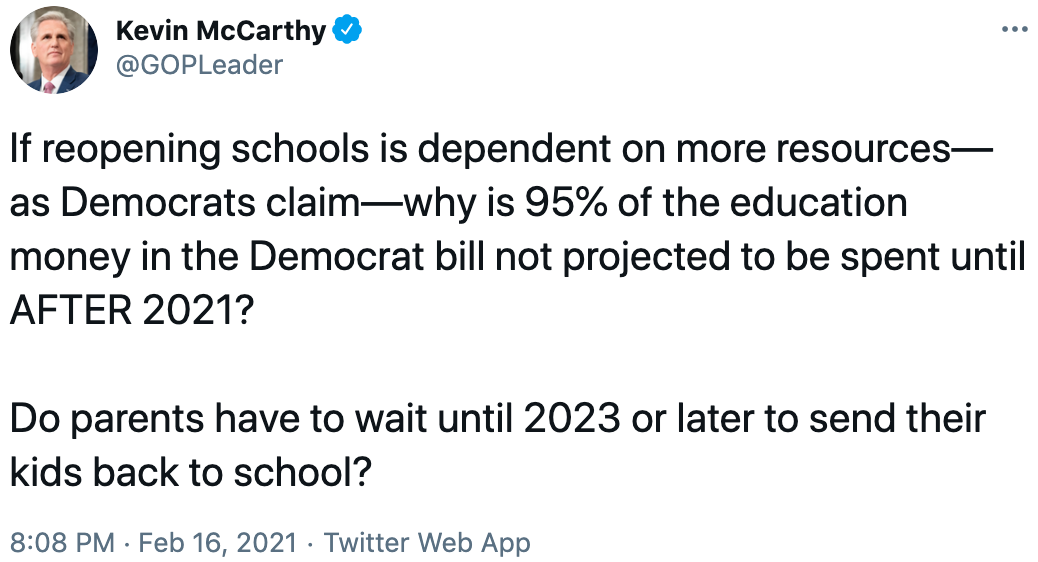 Science, Space, and Technology Committee Republicans call for a hearing on following the science to reopen schools. 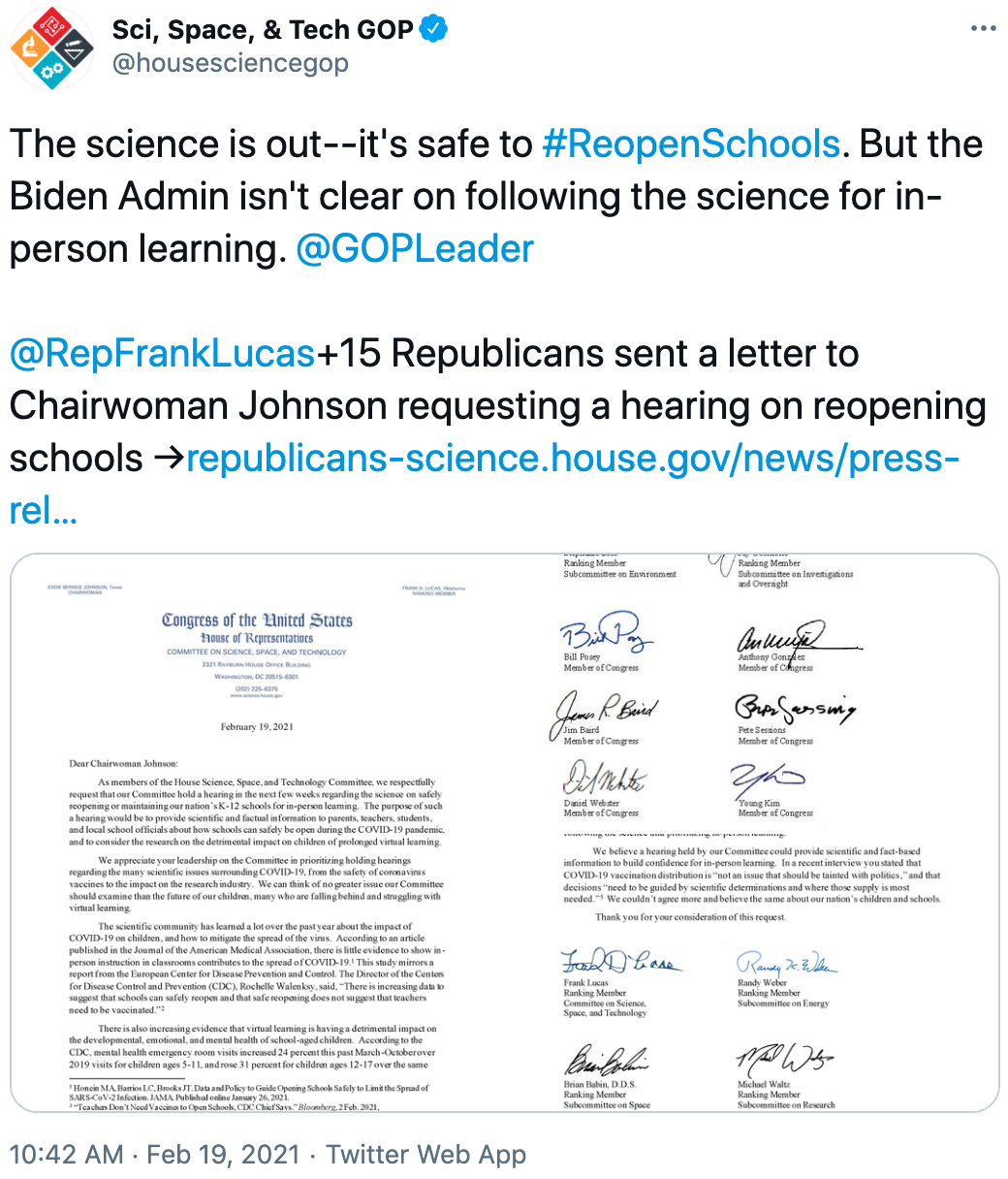 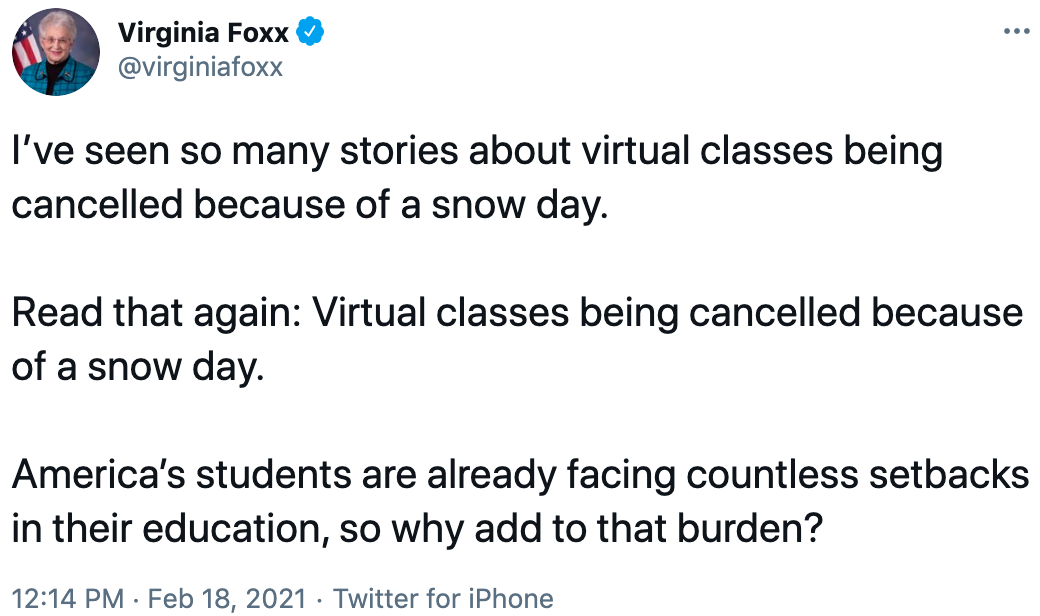 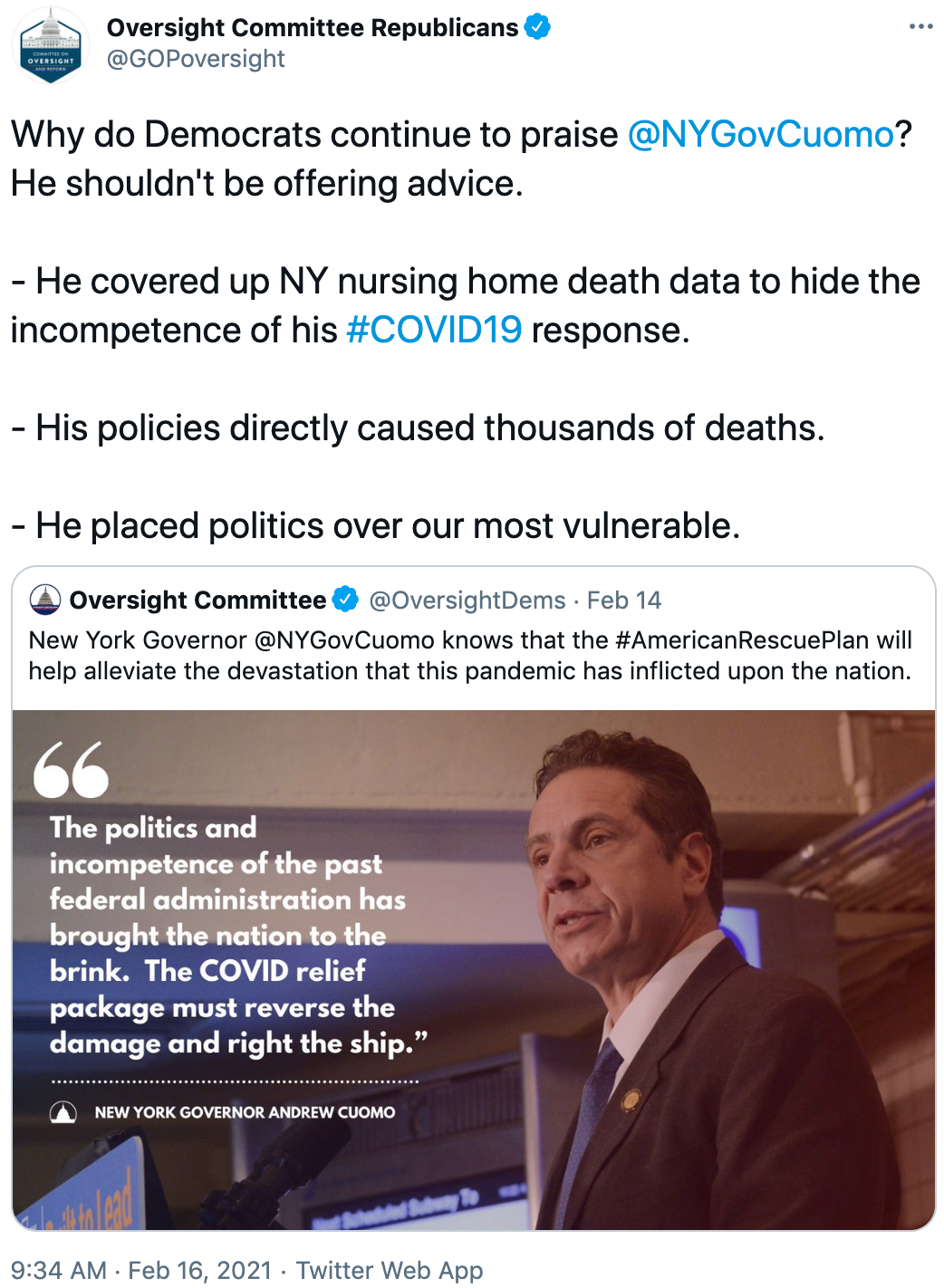 Steve Scalise calls out Governor Cuomo for blaming nursing home staff and the federal government for his own deadly order. 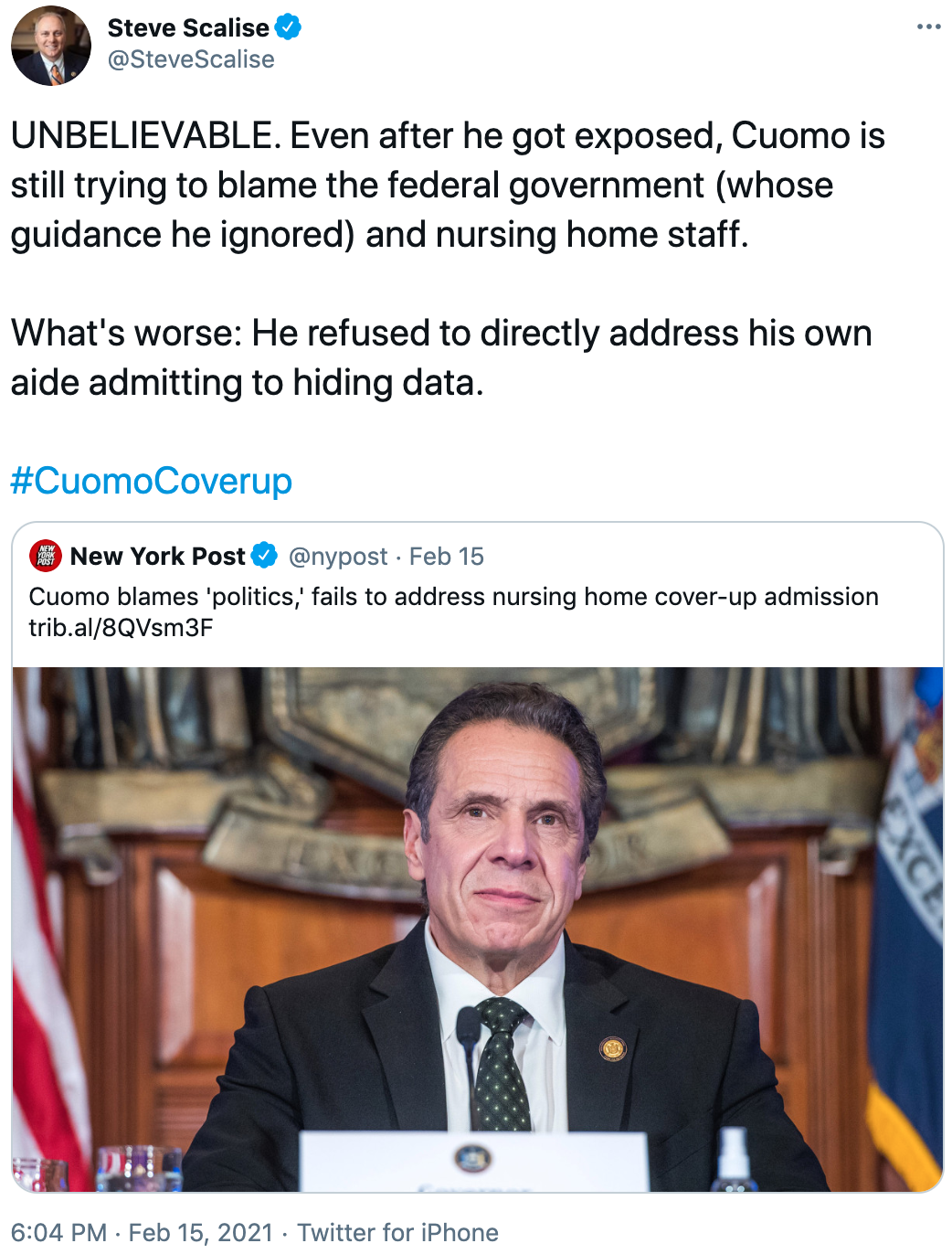