CDC Says to Get Kids in School ASAP: Last week, CDC officials called for returning children to classrooms as soon as possible, underscoring in-person learning can be carried out safely. Dr. Fauci also said, “it’s less likely for a child to get infected in the school setting than if they were just in the community.” However, radical unions continue to ignore the science. Will President Biden cave to unions’ demands or follow the science and put children’s needs first?

Biden Vaccine Plan is Trump’s Plan: President Biden’s vaccine plan is President Trump’s plan. Before he assumed office, the United States was already administering close to a million vaccines a day. By doing simple math, we are on track to deliver 100 million doses in 100 days, showing that President Biden’s plan is not a new plan at all and leans on the Trump Administration’s success. Will President Biden come up with his own plan?

Cuomo’s Cover Up: While Governor Andrew Cuomo has been touting his “leadership” during the pandemic, the New York Attorney General’s office found he undercounted nursing home deaths by up to 50%. While Cuomo may not care, New York residents and the American people do. Select Subcommittee Republicans have been hot on the trail for months and are taking action to hold him accountable.

Biden’s Plan a Job Killer and Bailout for States: Instead of targeted relief to the Americans that need it most, President Biden continues to cater to his radical left base by pushing policies that will cause further harm to already struggling small businesses, such as increasing the minimum wage to $15. Leading studies suggest raising the minimum wage would cost two million American jobs.

President Biden also wants to reward the liberal states that elected him by handing them $350 billion to bail out their mismanagement and massive debts. Over the past year, Congress and the federal government made available nearly $1 trillion to help states and localities through the pandemic but states claim this isn’t enough. American taxpayers should not be forced to bail out poorly run state governments, mishandled pension funds, and poor budget planning.

Schools Need to Reopen Now: Getting kids back in school is a top priority. For months, the science has shown kids can go back to school safely. In September, a Brown University study found confirmed coronavirus rates among students at 0.076% and 0.15% for teachers. Last week, CDC officials said schools can be operated safely and open their doors to children. Despite the clear science, radical unions are refusing to go back to work, which continues to harm children and families. From coast to coast, failing grades amongst students are up dramatically. The most vulnerable children, including minorities and those with disabilities, are especially impacted by the unions’ refusal to put kids first. One organization estimates that as many as three million children have disappeared from school. President Biden pledged to reopen schools in 100 days. Let’s hope he doesn’t cave to unions’ irrational demands and instead puts students’ needs first.

Do as I say not as I do: Hours after President Biden signed an executive order mandating masks on federal property, he was spotted without a mask on federal property. His press secretary justified it since he was “celebrating.” In his own words, “it’s time to mask up,” Mr. President.

Must admit orders for your family, but not mine: Pennsylvania Secretary of Health, Dr. Rachel Levine mandated nursing homes to admit COVID-19 patients but moved her mother out of a personal care facility before doing so. Now she’s one of President Biden’s nominees for a top position at the U.S. Department of Health and Human Services, despite the fact that the Pennsylvania Attorney General’s office has an ongoing investigation into her deadly must admit order.

Cave to Radical Union: Biden pledged to reopen K-12 schools within 100 days but quickly caved to the left after meeting with the radical Chicago teachers union that wants to keep schools closed. When will he start standing up to these liberal special interest unions blocking kids from classrooms?

Travels Bans are Xenophobic … or Not: On March 18, 2020, then-candidate Joe Biden said halting travel from China due to the coronavirus was “xenophobic fear-mongering.” Then on January 24, the Biden Administration announced it is imposing a multi-country entry ban because of the pandemic.

WHO Doesn’t Deserve U.S. Funding or Membership: On day one of his presidency, President Biden had the United States rejoin the World Health Organization without it undergoing serious reforms first. From the very start of the coronavirus pandemic, the WHO and Secretary-General Tedros have proven that their priority has been to abet the Chinese government at the expense of the American people and the rest of the world. While China spread misinformation so it could hoard medical supplies, the WHO parroted China’s lies denying human to human transmission of the virus and Tedros praised them for their transparency. The WHO still refuses to say COVID-19 started in China and Tedros even praised China again last week for “cooperating.” Bottom line: American taxpayers shouldn’t be forced to subsidize the WHO that has acted as China’s propaganda outlet at every turn.

In June 2020, Select Subcommittee Republicans called on Governor Cuomo to provide information regarding his decision to mandate nursing homes and long-term care facilities to admit untested and contagious COVID-19 patients from hospitals and again renewed the request in July 2020. Select Subcommittee Republicans and the New York delegation also called on New York Attorney General Letitia James to investigate the origins of Governor Cuomo’s deadly nursing home order and the impact it had on the state’s elderly population.

David Brooks: Children Need to Be Back in School Tomorrow (New York Times Opinion)
“The unions are not reflecting reality. Instead of addressing legitimate fears with facts and evidence, they are using their political muscle to inflame those fears. The most vulnerable people in our country are the victims.”

Chicago Teachers Union vs. Biden (Wall Street Journal Editorial Board)
“The union is taking kids hostage to extract more money from Congress with no guarantee that it will release them if it does. … Haven’t district leaders read the children’s book “If You Give a Mouse a Cookie”? Accommodating unreasonable demands leads to more unreasonable demands.”

Joe Biden sacrifices children to the teachers unions (Washington Examiner Editorial Board)
“As teachers unions display reckless disregard for the well-being of children, it’s enraging that Biden is too afraid to stand up to them. Don’t go with the flow, Joe. Take the lead for the nation’s children.”

C.D.C. officials say most available evidence indicates schools can be safe if precautions are taken on campus and in the community. (New York Times)
“[F]ederal health officials weighed in with a call for returning children to the nation’s classrooms as soon as possible, saying the “preponderance of available evidence” indicates that in-person instruction can be carried out safely as long as mask-wearing and social distancing are maintained … Federal officials cited the many benefits of in-person schooling for children, and argued for prioritizing their educational, developmental and emotional and mental health needs.”

Biden sticks to vaccine goals nearly met by his predecessor (Washington Post)
“When President Biden announced in early December that his administration would aim to put 100 million coronavirus vaccine doses into people’s arms in his first 100 days, it seemed like an ambitious target … Six weeks later, the same target appears much less ambitious because of greater manufacturing certainty and the increased pace of inoculations in the final days of the Trump administration.”

N.Y. Severely Undercounted Virus Deaths in Nursing Homes, Report Says (New York Times)
“The New York State attorney general accused the Cuomo administration of undercounting coronavirus-related deaths at nursing homes by as much as 50 percent, according to a report released on Thursday … In one instance, an unnamed facility reported 11 confirmed and presumed deaths to the Health Department as happening on site through early August. The attorney general’s survey of that same facility, however, found 40 deaths, including 27 at the home and 13 in hospitals.”

The Covid-19 Origin Investigation (Wall Street Journal Editorial Board)
“Team Biden has promised that the U.S. will reassert U.S. influence at international organizations like WHO. But if a U.S. return doesn’t prompt a more thorough investigation of the virus—one of the agency’s most important jobs—what exactly is the point of membership?”

Ohio Small Business Owner Gives Back: All across America there are everyday heroes who are making a difference in their communities. For instance, Mary Beth Williams owns a banquet hall, The Gentry, in Hubbard, Ohio. Even though her revenue has plummeted during the pandemic, she’s found ways to help fundraising efforts for school athletic programs and extracurricular activities in her community. Mary Beth started operating as a take-out style restaurant and sponsored specific groups each week. So far, the take-out fundraisers have helped raise around $15,000 for the community and school programs.

Republican Whip and Select Subcommittee Ranking Member Steve Scalise (R-La.) calls on Governor Cuomo to stop his nursing home cover-up and provide all the data related to his deadly order. 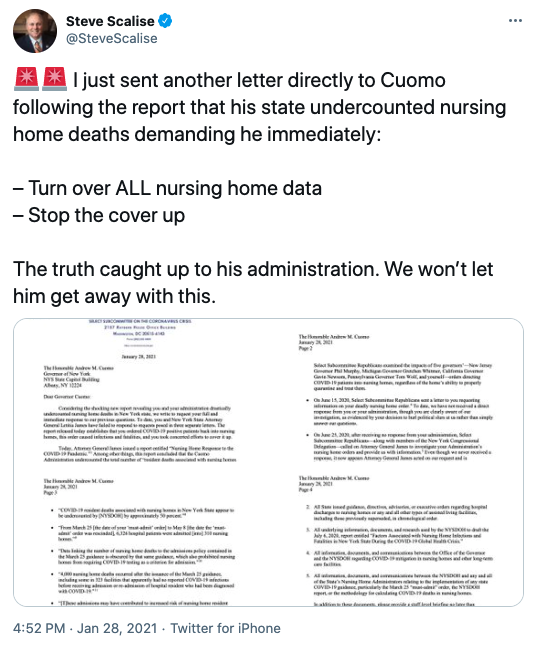 Select Subcommittee Republicans call out Governor Cuomo for underreporting nursing home deaths due to his deadly must admit order. 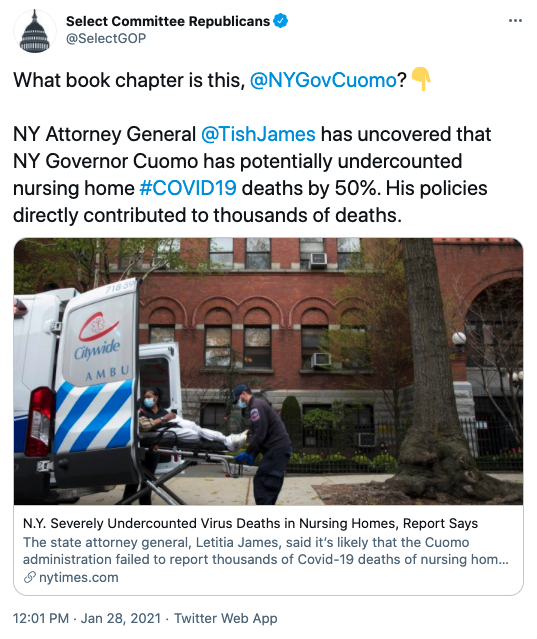 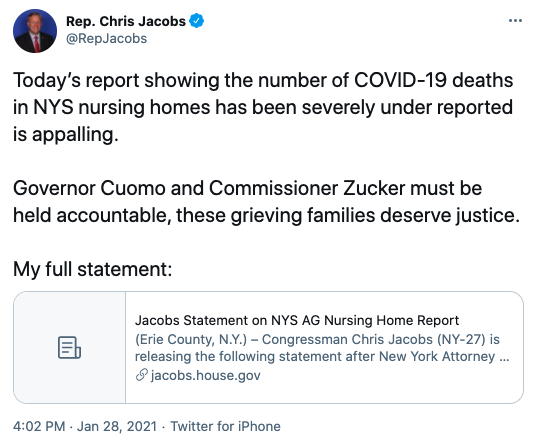 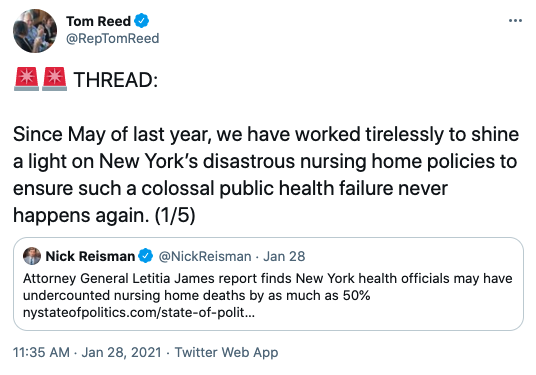 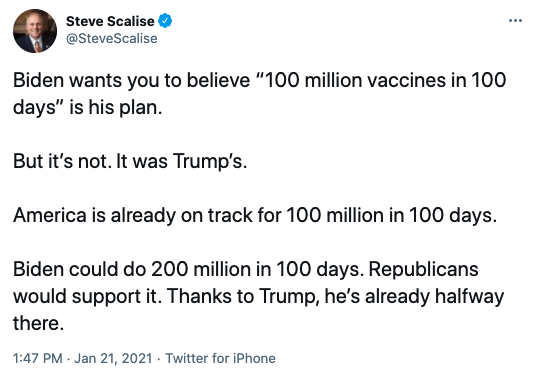 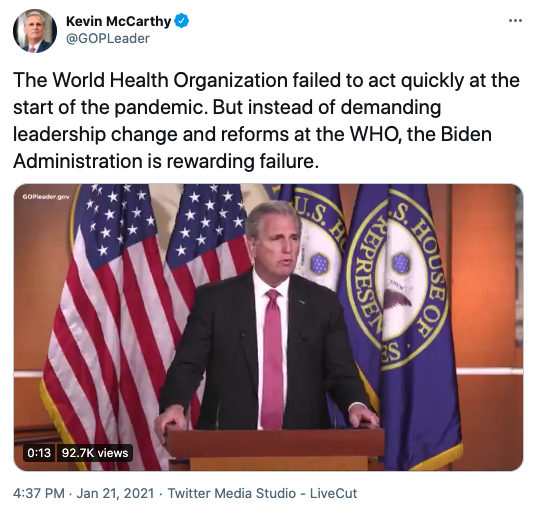 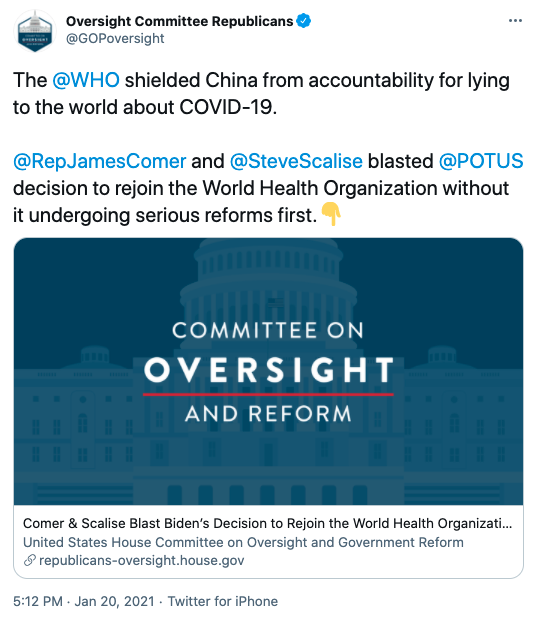 Steve Scalise highlights that the WHO still refuses to say COVID-19 started in China. 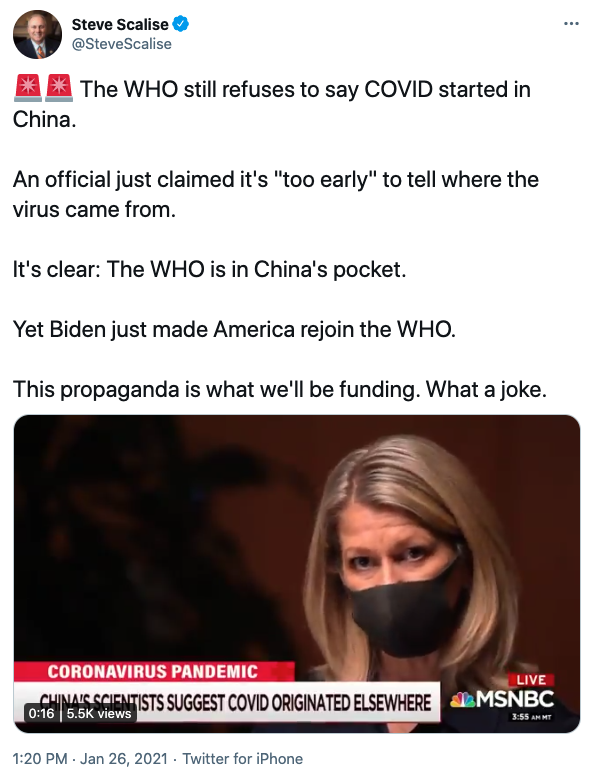