TOPLINE: After a month of record-high coronavirus cases — amid reports that nearly one-third of small businesses in states like New York and New Jersey have permanently closed their doors — Speaker Nancy Pelosi brought the House of Representatives back into session this week to vote on a bill that… legalizes marijuana.

Americans suffering from the coronavirus crisis need targeted relief now. While Speaker Pelosi blocks this critical relief, Republicans are fighting for workers and small businesses via a discharge petition, led by Rep. Jaime Herrera Beutler (R-Wash.), to unlock $138 billion in unspent Paycheck Protection Program (PPP) funds and extend the PPP through the end of the year. Speaker Pelosi and the Democrats are the only thing standing between American small businesses and this relief. Every House Democrat must be asked why they are refusing to let this bill come to the House Floor.

Under President Trump’s leadership, Operation Warp Speed has funded the development of several different highly effective vaccines, which could be distributed to front-line workers and at-risk populations within the month.

It will still take some time before life returns to normal. Small businesses need our support to make it through the rest of this pandemic until demand returns.

Despite assistance for businesses and individuals drying up or expiring months ago, Speaker Pelosi has continually rejected narrow and targeted relief bills in favor of a behemoth stimulus package. AP News reports, “Pelosi seems to have overplayed her hand as she held out for $2 trillion-plus right up until the election. The results of the election, which saw Democrats lose seats in the House, appear to have significantly undercut her position.”

The consequences of Speaker Pelosi’s cynical political games have been catastrophic:

Fortunately, a solution exists. Republicans and Democrats must take action to circumvent Speaker Pelosi’s obstructionism and advance targeted relief in the House. On September 25th, Rep. Jaime Herrera Beutler (R-Wash.) filed a discharge petition to force a vote on Rep. Steve Chabot’s (R-Ohio) bill to extend the Paycheck Protection Program through the end of the year.

Click here or on the image above to view the discharge petition and signatories.

Two days later, 23 House Democrats sent a letter to Speaker Pelosi and Majority Leader Steny Hoyer stating, “It is our request that you continue to negotiate towards a bipartisan deal. Otherwise, a discharge petition is the only potential option for COVID-19 related action on the House Floor.”

In the absence of any COVID-relief bills in the House this week, and in light of Speaker Pelosi’s decision to schedule a vote on marijuana legalization instead, the time has come for these Democrats and their colleagues to sign Rep. Herrera Beutler’s discharge petition and provide immediate relief for small businesses.

With all Republicans signing, only 20 Democrats must join Republicans in this effort. With the support of the Democrats who signed the letter, targeted relief for small businesses could be on the House Floor immediately. American workers are relying upon House Democrats — will Democrats answer or abandon them?

Background on the Discharge Petition: 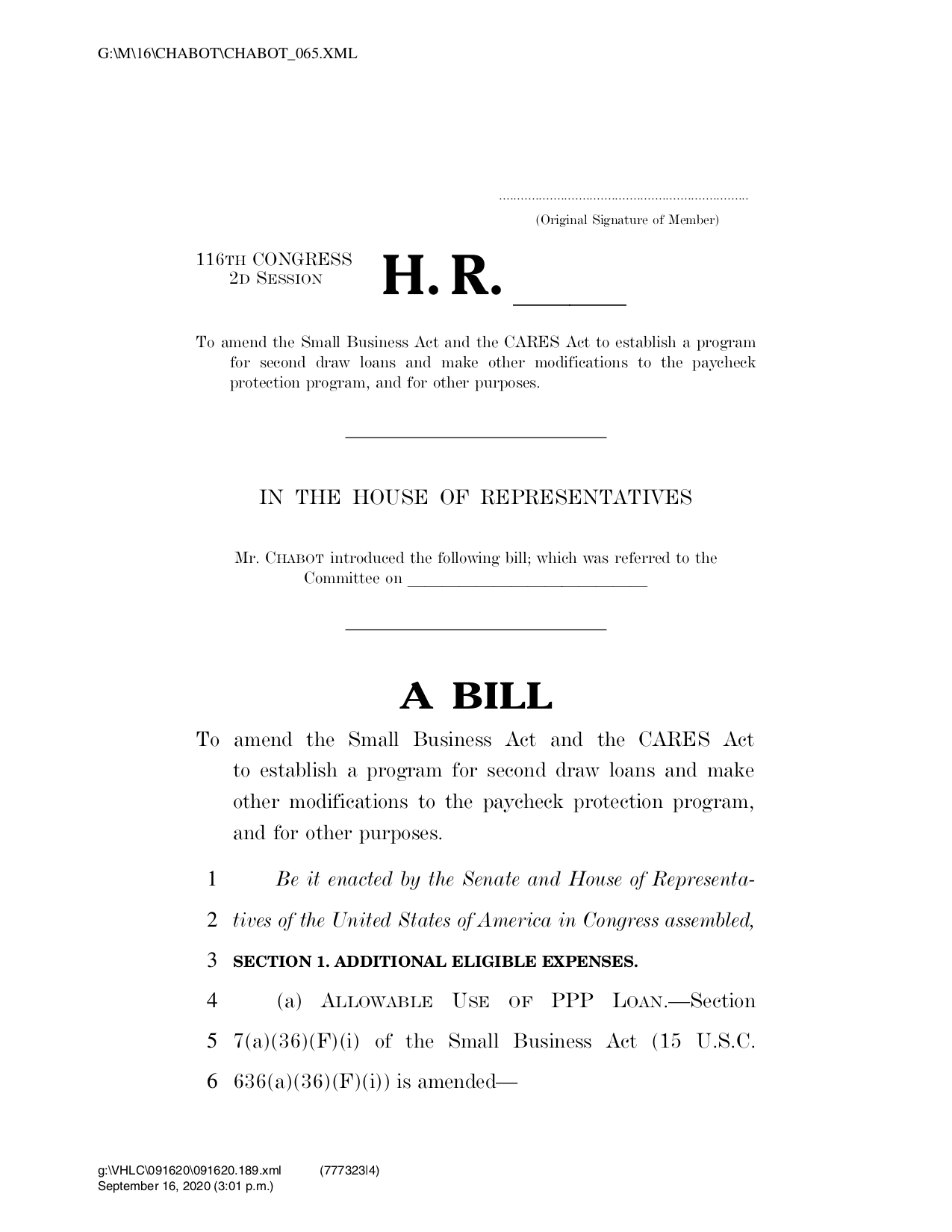 Click here or on the image above to read Rep. Chabot’s bill.

Background on the Paycheck Protection Program:

BOTTOM LINE: Congress is failing the American people. Every day that Speaker Pelosi delays bringing small business relief up for a vote only results in hundreds more closures and millions of lost jobs. We cannot wait any longer. Democrats must abandon Speaker Pelosi’s policy of obstructionism and join Republicans in a bipartisan effort to save our nation’s small businesses.