WASHINGTON, D.C.—House Republican Whip Steve Scalise (R-La.) joined Fox Business Channel’s Morning’s with Maria to discuss the implementation of the Coronavirus relief bill, which needs to be the focus of Congress and the administration over the coming weeks to ensure workers, families, and businesses can survive this crisis.

Whip Scalise also discussed his co-sponsorship of Rep. Bryan Steil’s (R-Wis.) bill to rescind the $25 million in federal funding for the Kennedy Center, in light of the news they stopped paying most of their workforce, despite the federal aid. 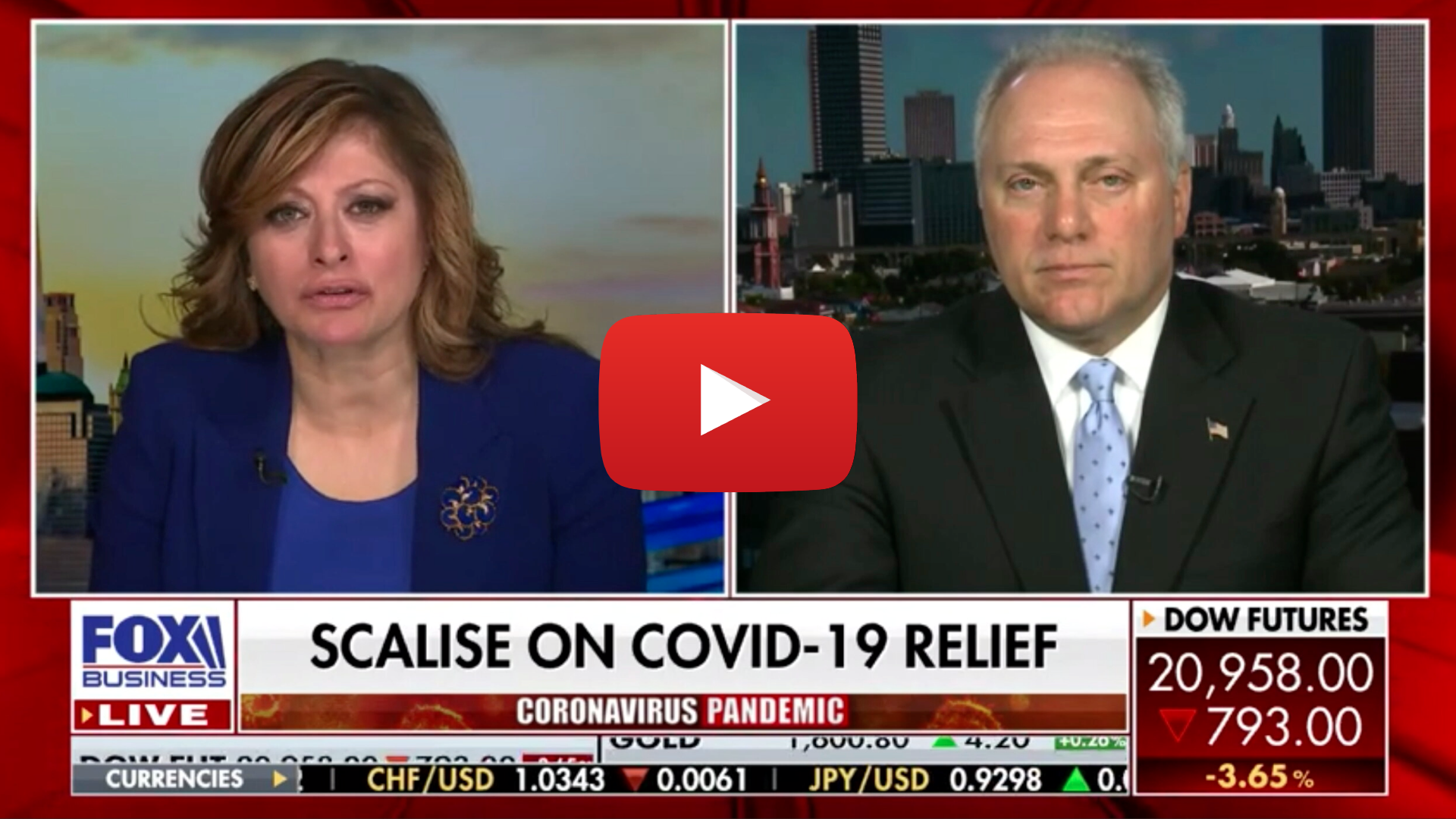 On ensuring healthcare professionals in Louisiana get the supplies they need:

“I did a conference call yesterday with all the hospitals in my district and around the New Orleans region, and they’re all bearing through this as best as they can and they, you know, obviously would like more ventilators. It was very helpful on Sunday – the National Stockpile sent down about 110,000 PPE’s to the state and so, they’re starting to see those. That’s a big help. You know, they’re not maxed out on ventilators but of course, you know, if you look at the trend where it’s going there is a concern in the next few days that that could happen. We were able, by the way, to just get another 150 ventilators through the National Stockpile on Monday, so that’s a good sign that they’re going to be able to get some more ventilators out. Everybody’s trying to source ventilators on their own in addition to the National Stockpile. So, you know, you see everybody pulling together and the hospitals are working well together to handle this surge and clearly, it’s something to be concerned about but they’re all handling it and working through the challenges.”

On the alarming increase of Coronavirus cases across the country:

“You are seeing the death rate go up, and I think that’s really what the President is touching on is that the spike that you’ve been hearing a lot about, people are expecting in the next two weeks that that’s when that spike will hit. And what that means is not only more cases testing positive as the testing is going through a lot more effectively throughout the country, but you are seeing an increase in the number of deaths, and that’s the biggest concern. And I think the President’s just preparing the country for that.”

“Look, I’ve got a senior assisted living facility in my district that lost already over 12 people with more testing positive. So, you know, these are heartbreaking stories you’re seeing more overflowing right now, and people renting refrigerated trucks. That’s how dire it is because the funeral homes can’t even hold services right now because of social distancing. So, this is starting to become real in the sense of the number of deaths to the point where people I think are starting to know somebody in their own immediate circle, surely that’s tested positive, but possibly now that’s also died from Coronavirus.”

On the need to focus on implementing the CARES Act to provide a lifeline to families and small businesses:

“Y’all talked a little bit before the break about all of the historic things that have been passed by Congress so far. Three different bills in response to this disaster, this crisis just in the last few weeks. This third bill, by the way, is going to be a true lifeline to families and small businesses across the country. That’s where the focus needs to be on implementing this bill. Look, just yesterday, the Treasury Department came out with the application form for small businesses and there’s already tremendous demand. Banks are starting to ramp up, and maybe by Friday or Monday they’ll be able to start accepting those applications. That’s going to hold a lot of our small businesses together.”

On Speaker Pelosi’s shameful priorities that have nothing to do with Coronavirus:

“You know, unfortunately, Speaker Pelosi keeps talking about all of those things that had nothing to do with Coronavirus. She was talking about reinstating the SALT deduction before Coronavirus. She was talking about the Green New Deal before Coronavirus. She’s still talking about it today. Look, we don’t need another grab bag of Kennedy Center debacles and embarrassments, we need to focus on making the bill that we just passed, a $2.2 trillion package, let’s get that to work for the American people. President Trump is now starting to implement those things. That’s going to give families money in their pocket when they’re sitting at home and, you know, adhering to the local guidelines and many of them as you noted unemployed and possibly seeing those unemployment rolls growing by staggering numbers. We need to get relief to families, we need to give a lifeline to small businesses. We just passed that bill a few days ago. Literally as we’re speaking, regulations are being written to implement it. So, let’s make sure we’re focusing on getting that bill to work for families before we talk about some grab bag of wish list items that Speaker Pelosi has had for 10 years.”

On Speaker Pelosi holding up Coronavirus relief to fund the Kennedy Center:

“I think the biggest sign to the American people about why that is a folly, why that is not the route to go is look at what she did to hold up the bill last week for the Kennedy Center. It started at $1 million and she held up the entire relief package, Maria, for the entire country, for every worker that’s unemployed, for every small business you know that’s hanging on by a thread and hopefully will make it through this, they had to wait two and a half days, not to get more relief to those families, but to get $25 million to the Kennedy Center. And lo and behold, the ink’s not even dry on the bill and they go and lay off all their workers and musicians. That shows you what they really care about. The elites are only concerned about themselves and they hide behind the musicians to get the money. The minute they get the money, they throw their musicians under the bus and pocket the dough.

“That’s not what we need another round of, so let’s work on getting this bill in the pockets, the relief package, get that money in the pockets of families who need it. Get it in the pockets of those small businesses who need to hang on, who we need those jobs to come back. Every small, medium, and large size business that’s making tough decisions, we want them back. The bill we just passed last week is the ticket to making sure that relief works. President Trump is making sure he’s implementing it, let’s put Congress’ focus on that too.”